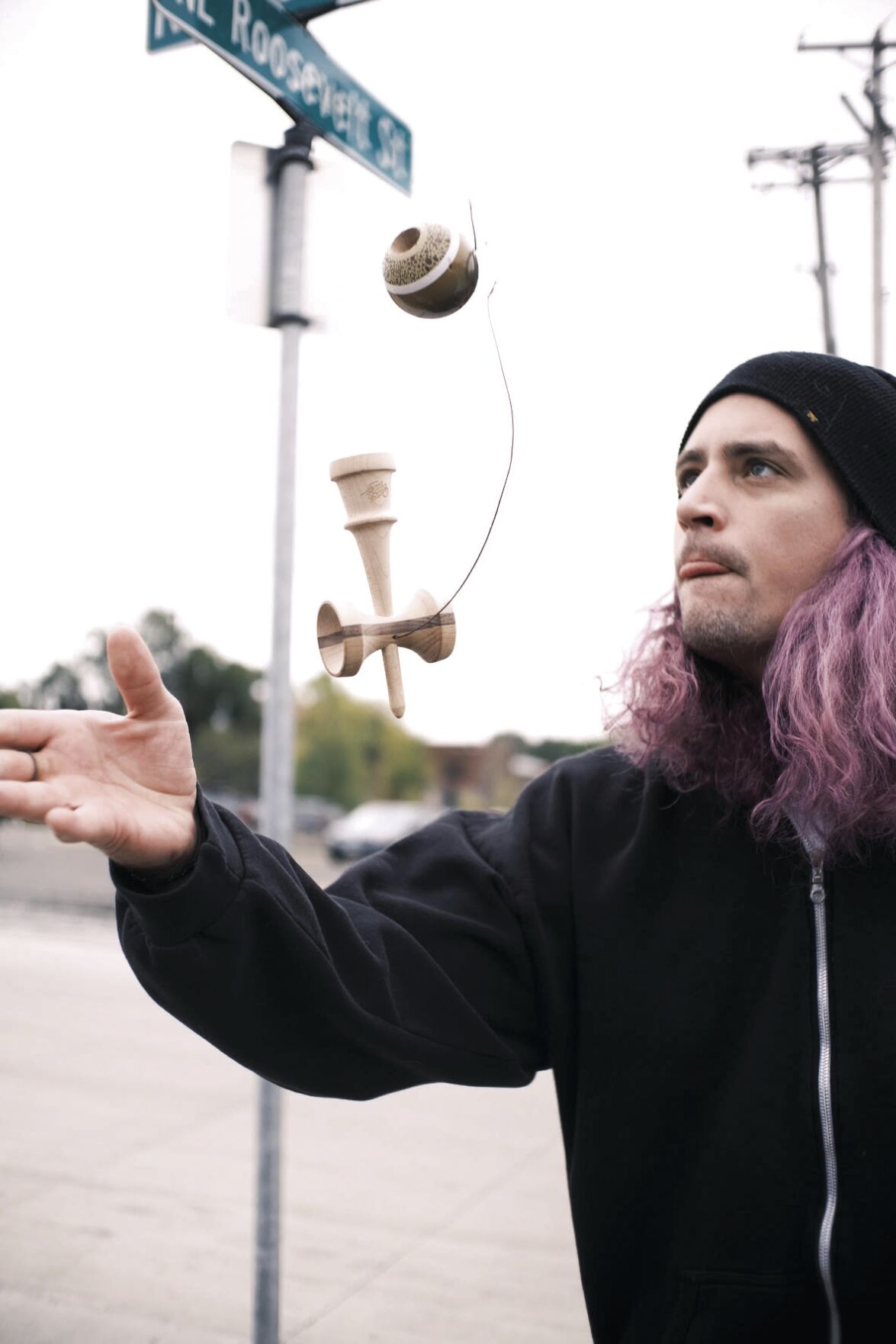 Matt “Sweets” Jorgenson shows off his skills with the kendama. Jorgenson is an expert in using the traditional Japanese skill toy to perform tricks. He has one trick, the Sweets Special, named in his honor. 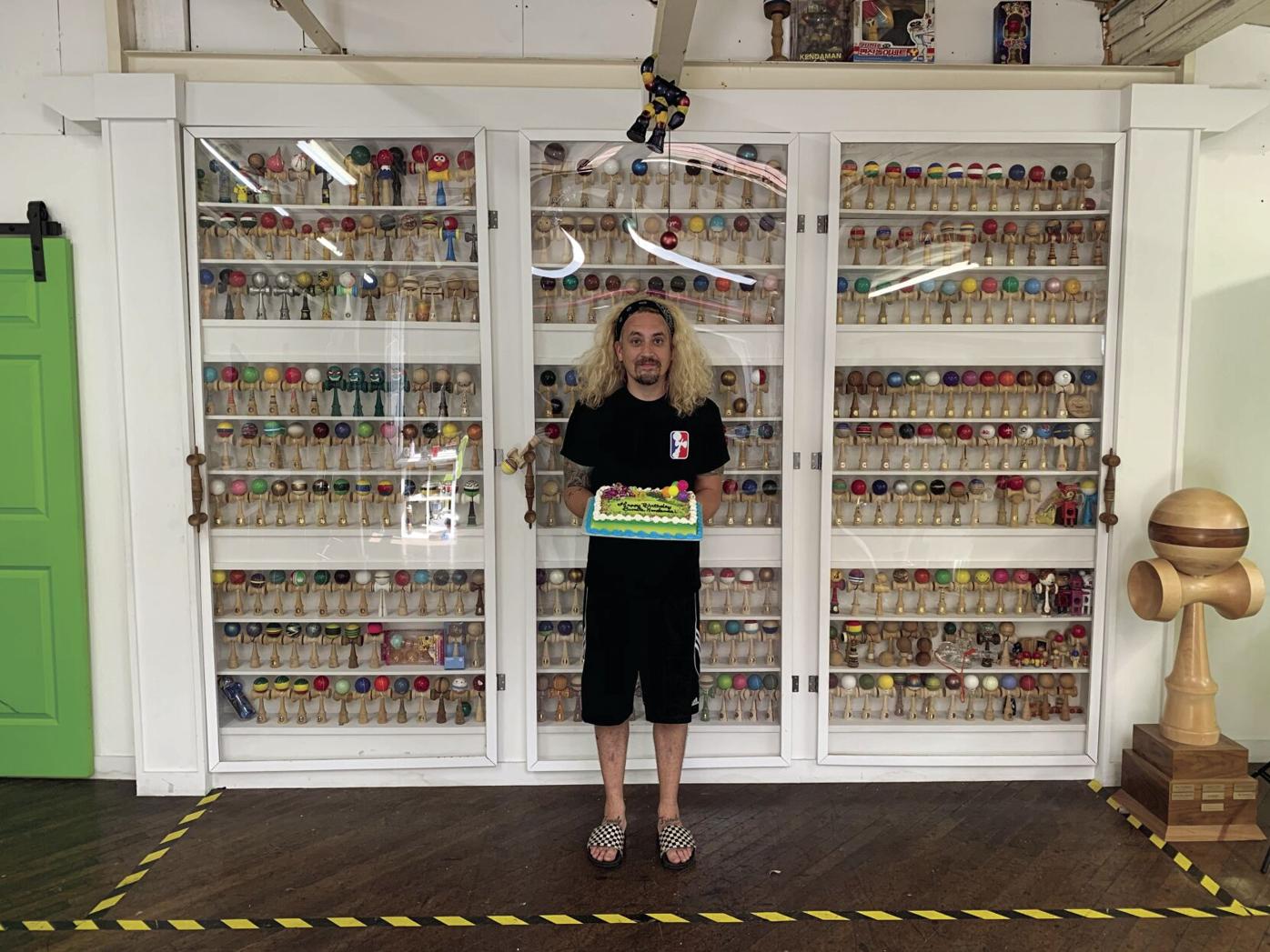 Matt Jorgenson holds a cake celebrating the 10th anniversary for his business, Sweets Kendamas. Behind him is a cabinet at his Minneapolis business that features a number of the kendamas that his company has made and painted since its inception. Submitted photos

Matt “Sweets” Jorgenson shows off his skills with the kendama. Jorgenson is an expert in using the traditional Japanese skill toy to perform tricks. He has one trick, the Sweets Special, named in his honor.

Matt Jorgenson holds a cake celebrating the 10th anniversary for his business, Sweets Kendamas. Behind him is a cabinet at his Minneapolis business that features a number of the kendamas that his company has made and painted since its inception. Submitted photos

Matt Jorgenson still remembers the moment when he first saw the toy that would change his life.

“I was at a cousin’s house while I was in college,” said Jorgenson of that fateful day in 2009. “He was a skier and snowboarder, and we were watching a snowboarding movie where the people went to Japan. Amongst all the different parts of the movie was a moment when the snowboarders playing with a kendama, doing tricks with it. When I saw it, I was intrigued.”

The kendama is a Japanese skill toy that includes a handle with a cup at the bottom, as well as two cups surrounding a spike. The kendama also has a ball that is connected to the toy with a string.

The idea is to complete tricks by variations of juggling the ball in the three cups or spiking the ball on the spike.

“My cousin had one, so he pulled it out for me, and I was immediately enamored with it,” Jorgenson admitted. “I was stunned by the number of things you could do with it, and how difficult it was – and how much I really wanted to keep playing with it.”

Little did the 2006 North Branch graduate know that he would do more than just “play with it.” Jorgenson created a company called Sweets Kendamas that has become one of the top retailers of the toy in the world.

That Jorgenson would become consumed by a kendama came as no surprise to his father, Jim Jorgenson.

“Matt was always very good at gaming,” the elder Jorgenson said, noting that his son grew up playing with toys of skill such as yo-yos and diabolos while also juggling, riding unicycles and walking with stilts. “I remember when we bought the Tiger Woods PGA Tour game in 1998. By the end of the day, he had beaten the whole game.

“And I remember when he was 11 years old and wanted to buy a $50 yo-yo to compete in a yo-yo tournament at Roseville Mall. I told him, ‘If you win the tournament, I’ll buy the yo-yo for you.’ And sure enough, he won the tournament.”

After his introduction to the kendama, Jorgensen tried to buy one for himself.

“I called every store in town, and I tried to buy one online, and I couldn’t,” he said. “No one has heard of it, no one has seen it. So I found one on eBay, but it was in Japan, and it cost me as much in shipping as it did to buy the kendama. But I bought some, then sold them to my friends at cost so we all had something to play with.”

The good news was that his friends quickly took the toy. But there was a problem: The kendamas he received quickly lost their paint after a few uses.

“The thought I kept having was, ‘If all these 21-year-olds love it, I bet I could get 12-year-olds to love it,’” Jorgenson said. “So I started practicing the kendama to get better at it – so I could teach people how to play it, and if they loved it, I would sell more kendamas.”

Jorgenson said that entrepreneurial mindset is a tribute to his parents, Jim and Carrie Jorgenson. His parents at one time owned the Dairy Queen in North Branch and still own the Pine City Dairy Queen.

“Since I was 12, I’ve seen how a business owner starts and runs a business,” Matt Jorgenson said. “I had the knowledge of entrepreneurship, so it wasn’t a scary idea to run a business of my own.

“And I didn’t want to get a real job, so I decided to give it a shot.”

In August 2010 he started the business he called Sweets Kendamas. He began by purchasing natural wood toys and painting them in a backyard shed.

“There’s no blueprint for running a kendama company in the United States because nobody had done it before,” Jorgenson said. “There was a lot of bootstrapping at first – in the early days, workers were paid in sandwiches and beer. I took help wherever I could, and if someone would string a kendama or paint a kendama, I would pay for their lunch.”

In the 10 years since it was launched, that backyard shed has grown into a warehouse in Minneapolis that houses 13 full-time employees.

“Everything I’ve accomplished has been a dream,” Jorgenson said. “Literally, a dream. I would think, ‘Maybe if I work hard enough, some day this, this and this will happen.’ Now I have to make new dreams every year, because the dreams turn into goals, and the goals turn into reality.”

While Jorgenson did not feel it was appropriate to talk about his company’s sales numbers, he did confirm its status as an industry leader.

“We sold a lot this past year, thanks in part to an agreement we have to sell kendamas at Target,” he said. “We are one of the largest, if not the largest, seller in the world.

Jorgenson said much of the reason for the success of the business comes from the love and support of his wife, Alexandra, and daughter Emma Jean, who is 2 1/2 years old.

“I’m the goofy guy out front who plays with the kendama, but my two business partners, Gabe Klemm and Matt Paulsen, are key to the business,” Jorgenson said.

“Gabe gave me the money I needed to make the dream happen; I had the ideas, but he was the one who put the business in motion. And Matt is our graphic designer who brought the brand to life; he designed the packaging and everything that makes us look awesome.”

But the “pied piper” of the kendama is Jorgenson, who walks around the offices with one draped over his shoulders like a scarf. He is an expert player, having recently passed the Japan Kendama Association’s 6 Dan test to become one of only two players outside Japan to earn that title.

He also has had a trick he created, the Sweets Special, recognized by that association, and he has traveled to more than 25 countries while making friends around the globe because of the kendama.

His company has a section on its website teaching others how to play with the toy (https://sweetskendamas.com/pages/learn-kendama-tricks) as well as a YouTube channel with more than 100,000 subscribers.

“I think the reason the business is successful is because of the love we have for kendamas,” Jorgenson said. “We have 13 employees, and all of them love kendamas as much as I do – and care about how our kendamas look and feel and play as much as I do.

“I hear from people all over the world who tell me kendamas have changed their life. It’s really crazy.”

How ‘Sweets’ got his name

How did Matt Jorgenson get the nickname “Sweets”?

“It was a joke that went too far,” Jorgenson said.

The nickname originated during his first week of college at the University of Minnesota in 2009.

You might expect that joke would eventually be forgotten. It was not.

“We went to a fraternity party – at a fraternity I ended up joining – and my roommates were introducing me as ‘Sweets,’” Jorgenson said. “From then on, everyone knew me as Sweets.”

And it is a nickname that has not only stuck, but was used as the name for the business he created soon after.

“I’ve always thought that, on a list of nicknames, ‘Sweets’ isn’t terrible,” Jorgenson said. “I could have been called a lot worse.”