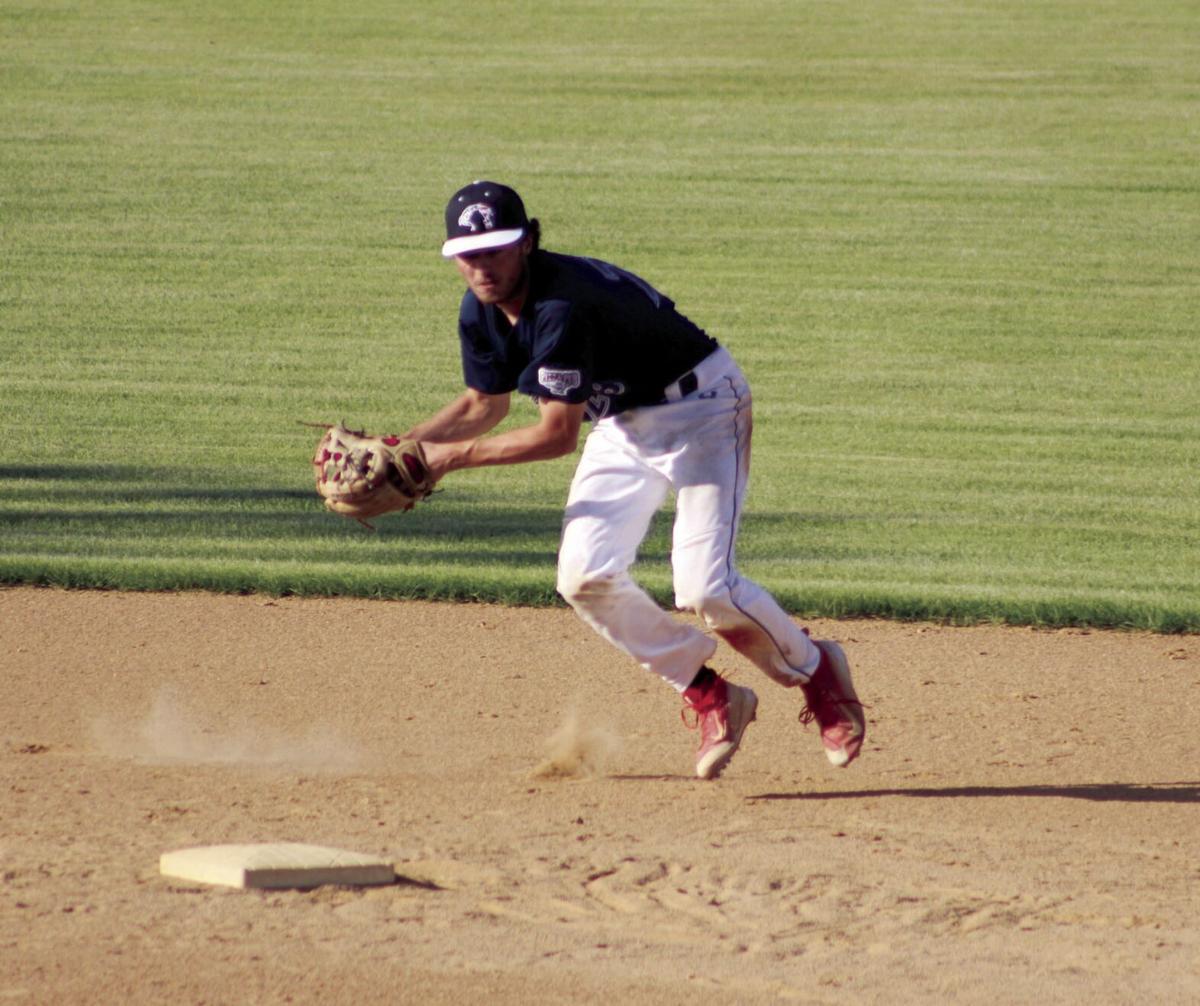 North Branch shortstop Jimmy Skroch fields a grounder at Isanti on Sunday, July 12. Skroch struck out 12 hitters in pitching the Nighthawks to a win at Chisago Lakes on Friday, July 10. 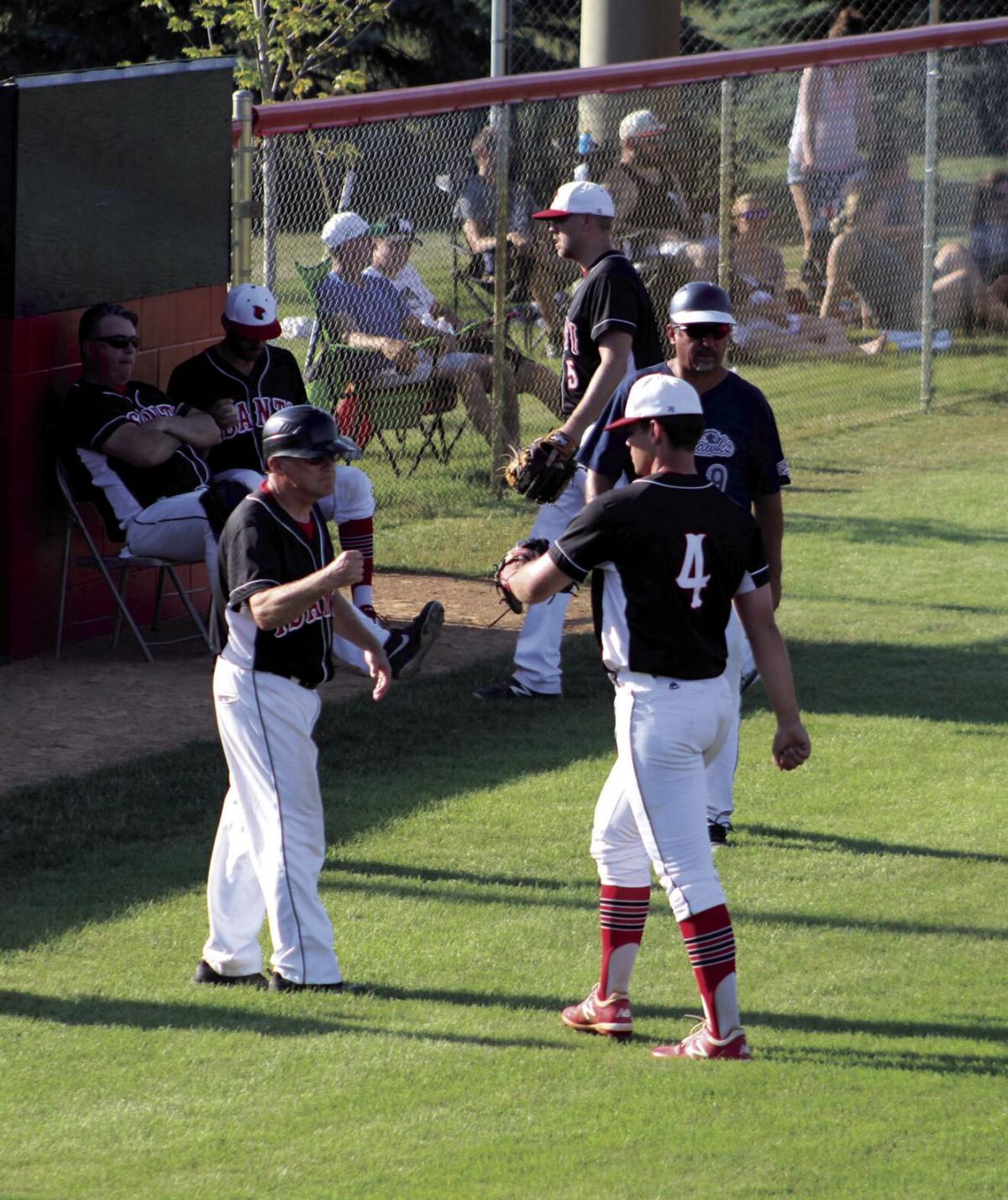 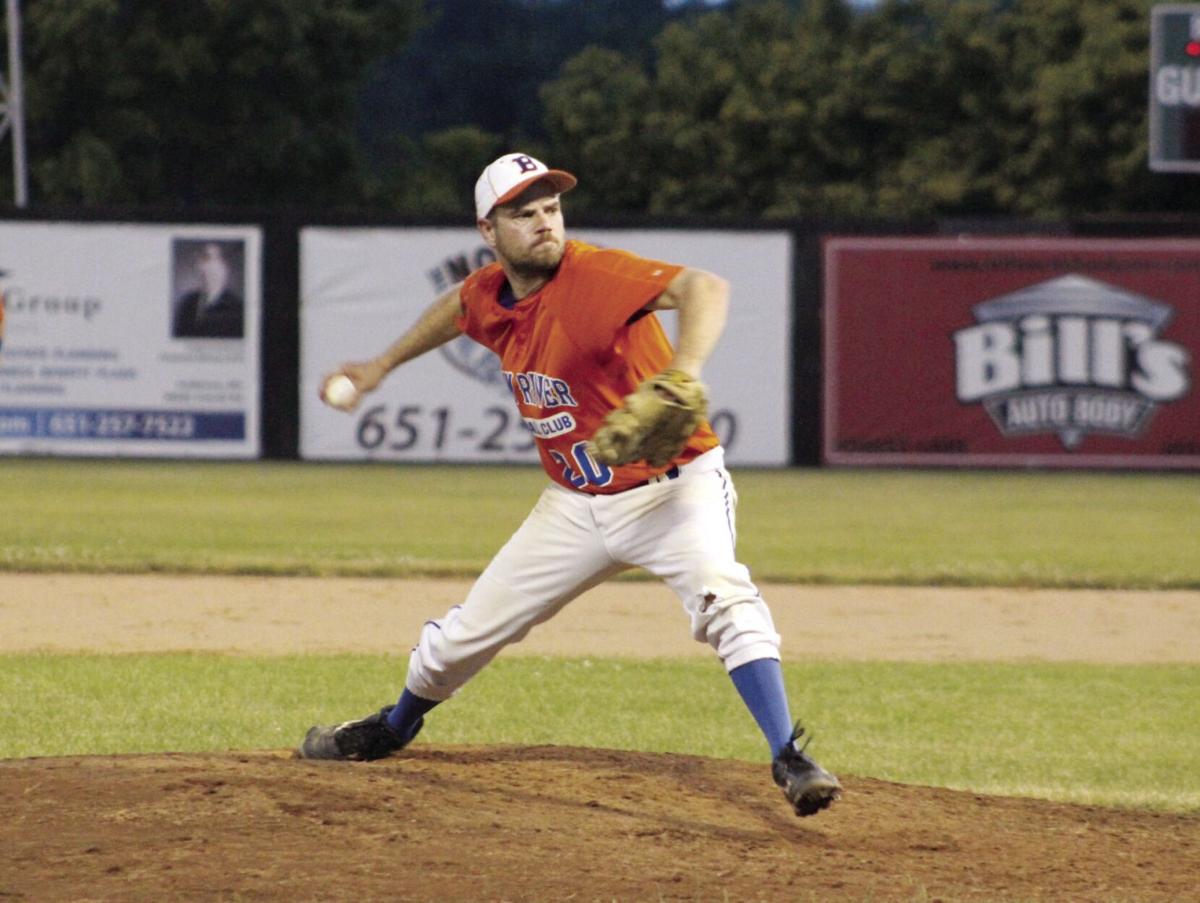 Nate Knudson pitched well for Rum River at Chisago Lakes, holding the Bulldogs to just one run in his first seven innings of work on Wednesday, July 8.

North Branch shortstop Jimmy Skroch fields a grounder at Isanti on Sunday, July 12. Skroch struck out 12 hitters in pitching the Nighthawks to a win at Chisago Lakes on Friday, July 10.

Nate Knudson pitched well for Rum River at Chisago Lakes, holding the Bulldogs to just one run in his first seven innings of work on Wednesday, July 8.

Town Ball squads around the state are dealing with a compressed schedule caused by the late start of the season due to fears over COVID-19.

But last week Isanti manager Steve Allen had a different concern: A fluke in the schedule kept his team from playing any games over the first nine days of July.

“It seemed like a long wait,” Allen said. “It was a goofy bit of scheduling. We had been playing so well before this break, I was hoping we hadn’t lost our edge.”

The Redbirds did not lose their focus, claiming a 5-0 win over Mora on Friday, July 10, before crushing Eastern Minny Central Division rival North Branch 14-3 in seven innings two days later.

Phil Bray and Brent Tholen combined to shut out Mora Friday on just two hits, with Bray striking out nine in seven innings of work. Tholen also collected two RBIs thanks to a triple, while Blaze Hogie and Wyatt Soderquist each had two hits for the Redbirds.

On Sunday the Isanti offense erupted against North Branch, pounding out 10 hits while also taking advantage of 12 walks. The Redbirds scored in all but one of the innings in which they batted to back a strong performance by starting pitcher James Green, who allowed just four hits and one earned run while fanning nine in seven innings.

“James got off to a slow start, but he ended up pitching really well,” Allen said. “And we kicked the ball around a little bit behind him. It was a good effort by him.”

For North Branch, the loss was the only blot on an otherwise solid week that saw the Nighthawks knock off Chisago Lakes twice, beating the Bulldogs 5-0 on Friday, July 10, before claiming a 5-2 win the next afternoon in North Branch.

Jimmy Skroch and Dylan Ramberg combined to shut out Chisago Lakes on just two hits in Friday’s win, with Skroch posting 12 K’s in six innings. On Saturday Charlie Linder shut out the Bulldogs over six frames, striking out nine, while Matt Robinson pitched three effective innings to close out the win.

“We had two really good outings against Chisago Lakes,” Nighthawks manager Jim Skroch said. “But we used up a ton of pitching, so against Isanti we had to throw four guys who really don’t throw much for us. But give credit to them for stepping up.”

Nick Pilz led the North Branch offense with three hits, including a double, against Chisago Lakes on Friday, while Clint Mattson had two of the Nighthawks’ five hits on Saturday. Mattson had an RBI single as part of a three-run second-inning rally against Isanti on Sunday.

“We thought if we won two of three games last week, it was a good week,” Skroch said. “The schedule like this is tough, but everyone is going through it. No excuses on our end.”

Rum River played only one game last week, and the result was a disheartening 9-8 loss at Chisago Lakes on Wednesday, July 8. Nate Kundsen allowed just seven hits and one run as the Bandits took a 5-1 lead into the bottom of the eighth.

But Rum River gave up seven runs in the eighth to lose the lead. Worse, after the Bandits scored three runs in the top of the ninth to retie the game, Chisago Lakes scored a run in the bottom of that frame to win.

Rum River’s Cody Kielsa nearly hit for the cycle, missing only a home run while also walking twice in five plate appearances, while Alex Wilkey had four hits that produced three RBIs and a pair of runs scored.

Braham also suffered through a difficult week, losing at Quamba 6-0 on Friday, July 10, before Hinckley swept a doubleheader from the Snappers the next day by scores of 11-0 and 4-3.

Zach Loy had two of Braham’s six hits in Friday’s game, while Kohl Horsch struck out six in 5.2 innings. Brady Yrjo had two of the Snappers’ six hits in the two Saturday games at Hinckley, while Ben Fiedler and R.J. Galvez combined to strike out 11 in seven innings of work in the second game.

Braham and North Branch both have quiet schedules in the week ahead. The Snappers do not play again until facing Mora in a twin bill on Sunday, July 19, while North Branch will host Rum River in a pair of games starting at 2 p.m. that same day.

That doubleheader against North Branch is the finish of a busy week for Rum River, a week that started at Isanti on Monday and also involved games against Chisago Lakes on Wednesday, July 15, and at Hinckley on Saturday, July 18.

Meanwhile Isanti also has a busy week after Monday’s game against Rum River. The Redbirds host St. Francis on Wednesday, July 15, then play Chisago Lakes on Friday, July 17, before hosting the Jordan Brewers in a non-league contest on Sunday, July 19.