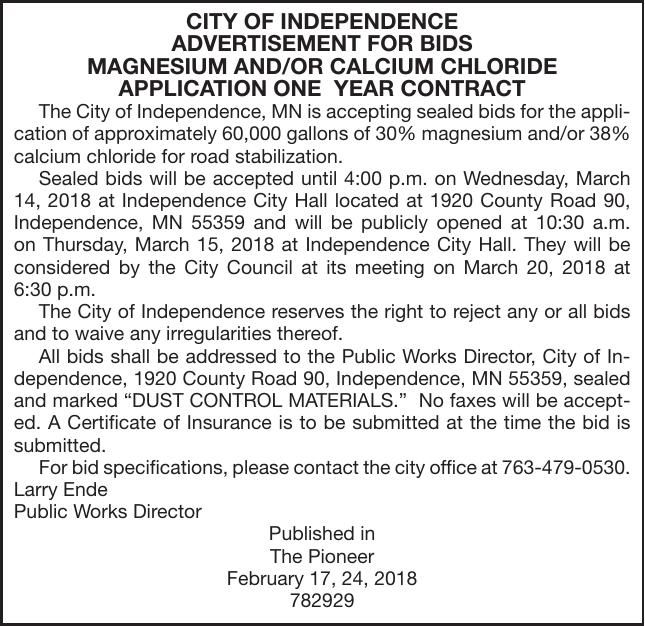 CITY OF INDEPENDENCE ADVERTISEMENT FOR BIDS MAGNESIUM AND/OR CALCIUM CHLORIDE APPLICATION ONE YEAR CONTRACT The City of Independence, MN is accepting sealed bids for the application of approximately 60,000 gallons of 30% magnesium and/or 38% calcium chloride for road stabilization. Sealed bids will be accepted until 4:00 p.m. on Wednesday, March 14, 2018 at Independence City Hall located at 1920 County Road 90, Independence, MN 55359 and will be publicly opened at 10:30 a.m. on Thursday, March 15, 2018 at Independence City Hall. They will be considered by the City Council at its meeting on March 20, 2018 at 6:30 p.m. The City of Independence reserves the right to reject any or all bids and to waive any irregularities thereof. All bids shall be addressed to the Public Works Director, City of Independence, 1920 County Road 90, Independence, MN 55359, sealed and marked DUST CONTROL MATERIALS. No faxes will be accepted. A Certificate of Insurance is to be submitted at the time the bid is submitted. For bid specifications, please contact the city office at 763-479-0530. Larry Ende Public Works Director Published in The Pioneer February 17, 24, 2018 782929 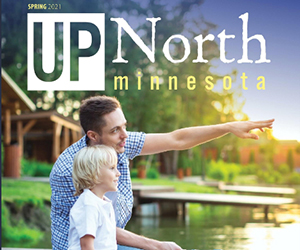