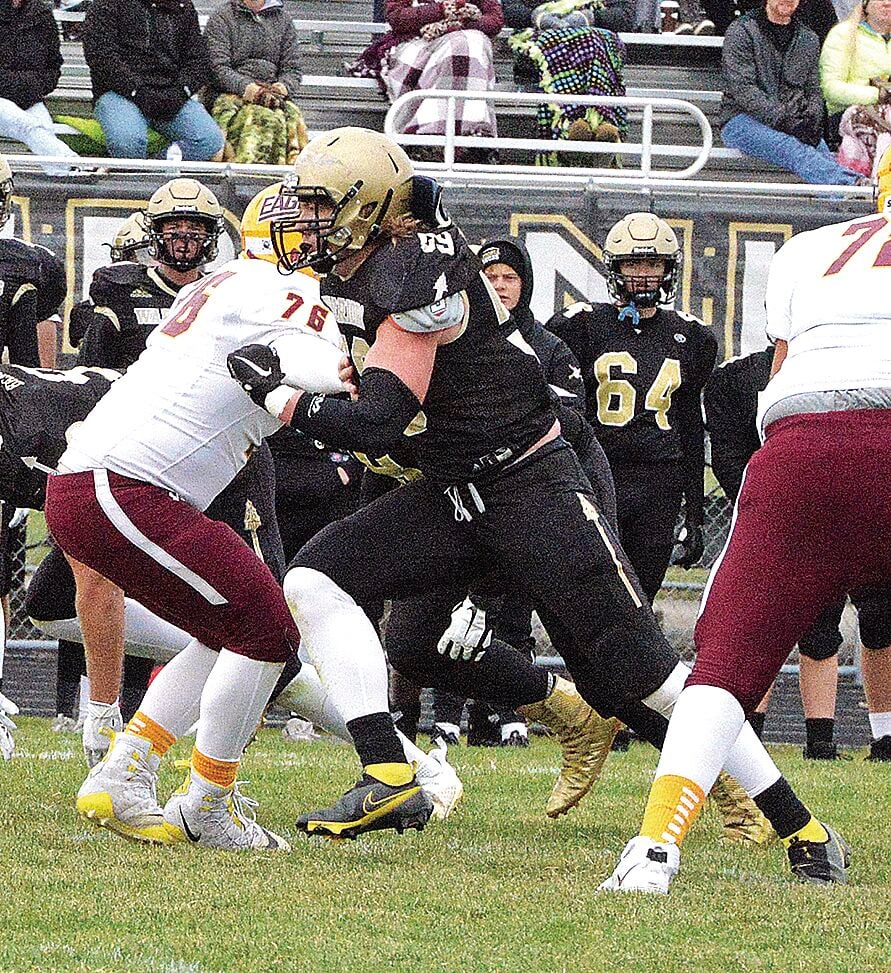 Senior Casey Schultz breaks through a line of Dover-Eyota players. Schultz has earned a football scholarship at the University of North Dakota next year. 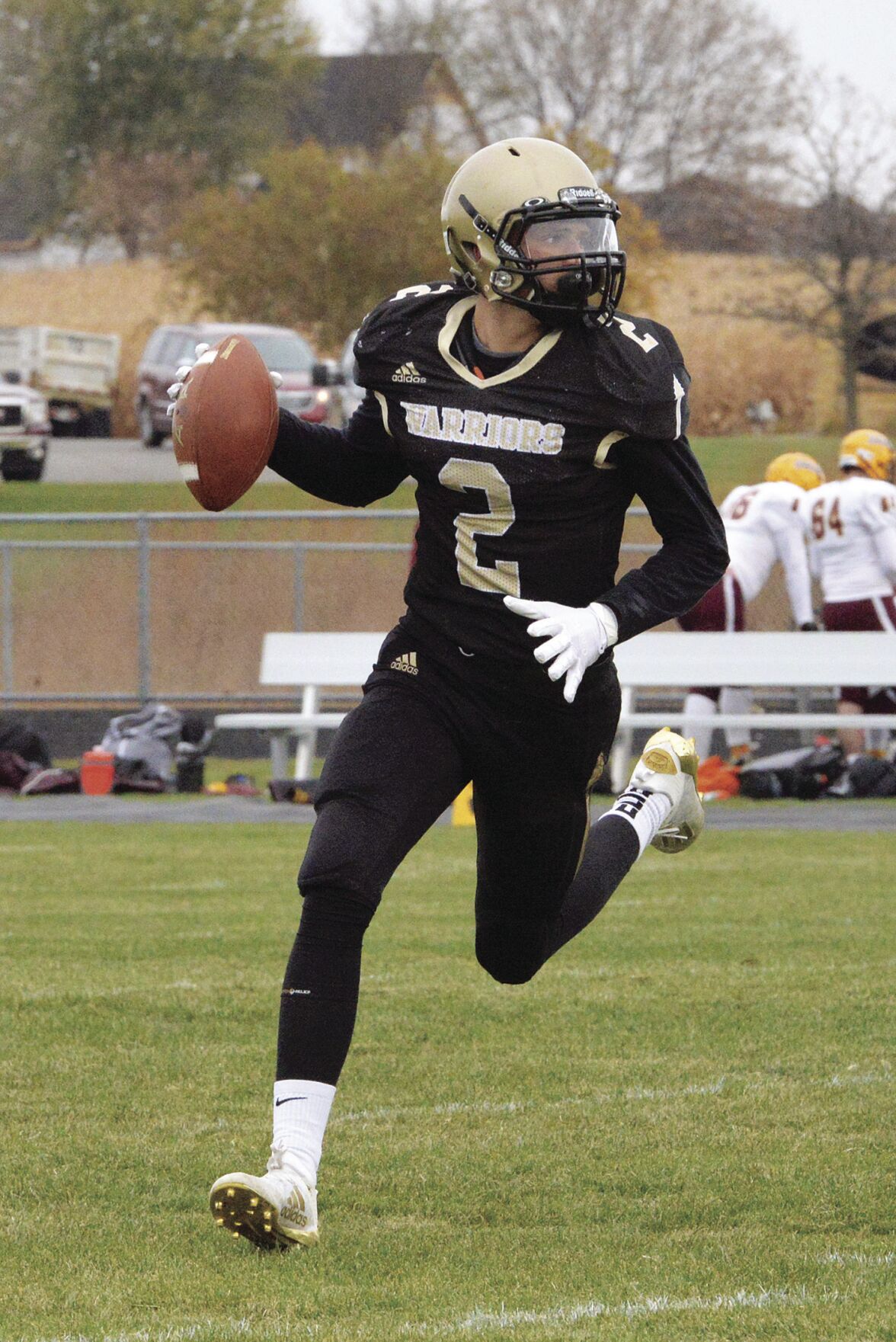 Eli King looks for an open teammate to throw a pass. 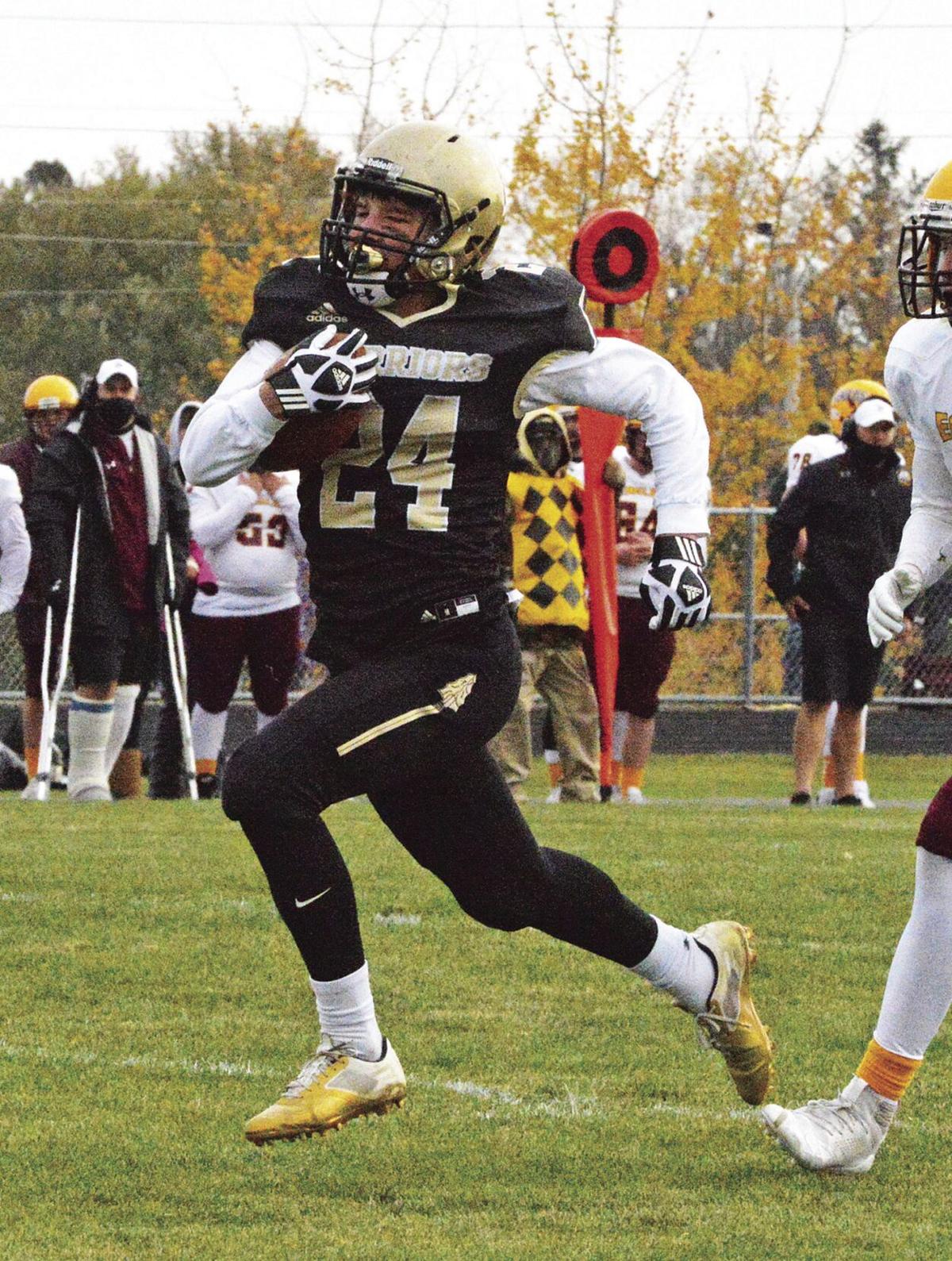 Thane Meiners sprints away with the ball from Dover-Eyota.

Senior Casey Schultz breaks through a line of Dover-Eyota players. Schultz has earned a football scholarship at the University of North Dakota next year.

Eli King looks for an open teammate to throw a pass.

Thane Meiners sprints away with the ball from Dover-Eyota.

Although a short one, the Warriors football team had a successful football season in an uncertain year, bringing their consecutive winning streak to 71 games.

A rise in COVID-19 cases locally stopped the season short of playing the remainder of their regular season games and the playoff season the state high school league had planned. The Warriors played just three games, facing off against PEM, Dover-Eyota and Chatfield. The remainder of the games were postponed or cancelled due to COVID-19.

Head coach Carl Fruechte said the coaching staff is “extremely proud” of the team and how they’ve handled things since  the beginning of the pandemic. It’s more than just the players’ football season that was affected, as the boys basketball team was cut short of a state title run last spring, no spring sports were allowed to play and the start of the official football season was delayed until October.

“They deal with adversity well [and] as a coaching staff, we couldn’t be prouder,” Fruechte said.

For the seniors however, the short season was harder to handle. Fruechte said there were a few distraught seniors.

“One of them said, ‘I’m not doing well at all,’” he relayed. In Warriors fashion, though, Fruechte was able to talk with that athlete. “We just talked about it. I said it was perfectly fine to be upset and mad. We re-affirm to the boys that we’re proud of them.”

Fruechte said the coaches also encourage the team members to go out for wrestling and basketball in the winter season.

The players have a lot of class and are mentally tough, he added.

“It’s been one big topsy turvy year. They handled it a lot better than most adults,” he said.

Whereas the school year started in person, they gradually moved to hybrid learning for grades 6-12 and just last week, moved to distance learning for all grades.

Superintendent Craig Ihrke cited in his recent “School Talk” article that the past week has been a difficult one.”

“Often there are decisions need to be made that have no clear and good outcome,” he wrote. “Regardless of whether we decided to remain in school in a hybrid model, or move to distance learning, it would have been an unpopular decision. The decision to suspend activities and athletics was again a tough one to make.”

Previously, the district planned to go to hybrid learning for all grades and make it to Thanksgiving break, but that was upended when three scenarios were met. Additionally, several cases led to a large number of quarantines of close contacts and isolations of people who tested positive, Ihrke said, and staff was already spread too thin.

Those included, “If we do not have enough teachers to adquately staff buildings,” “If we were to have an outbreak of cases with students and/or staff,” and “If the 14-day case rate remains above 50 for several consecutive weeks and the Minnesota Department of Health recommends CAPS moves to distance learning.”

At the time of this report, real time case rates for Houston County show three consecutive rates above 50. The projected case rate on Nov. 12 will be above 50, and on Nov. 19, it will be above 85. On Nov. 26, the case rate is projected to be over 60 and expected to climb over the next few days, Ihrke cited.

Safety of students, staff and the community at large is always at the forefront of decisions being made, he added.