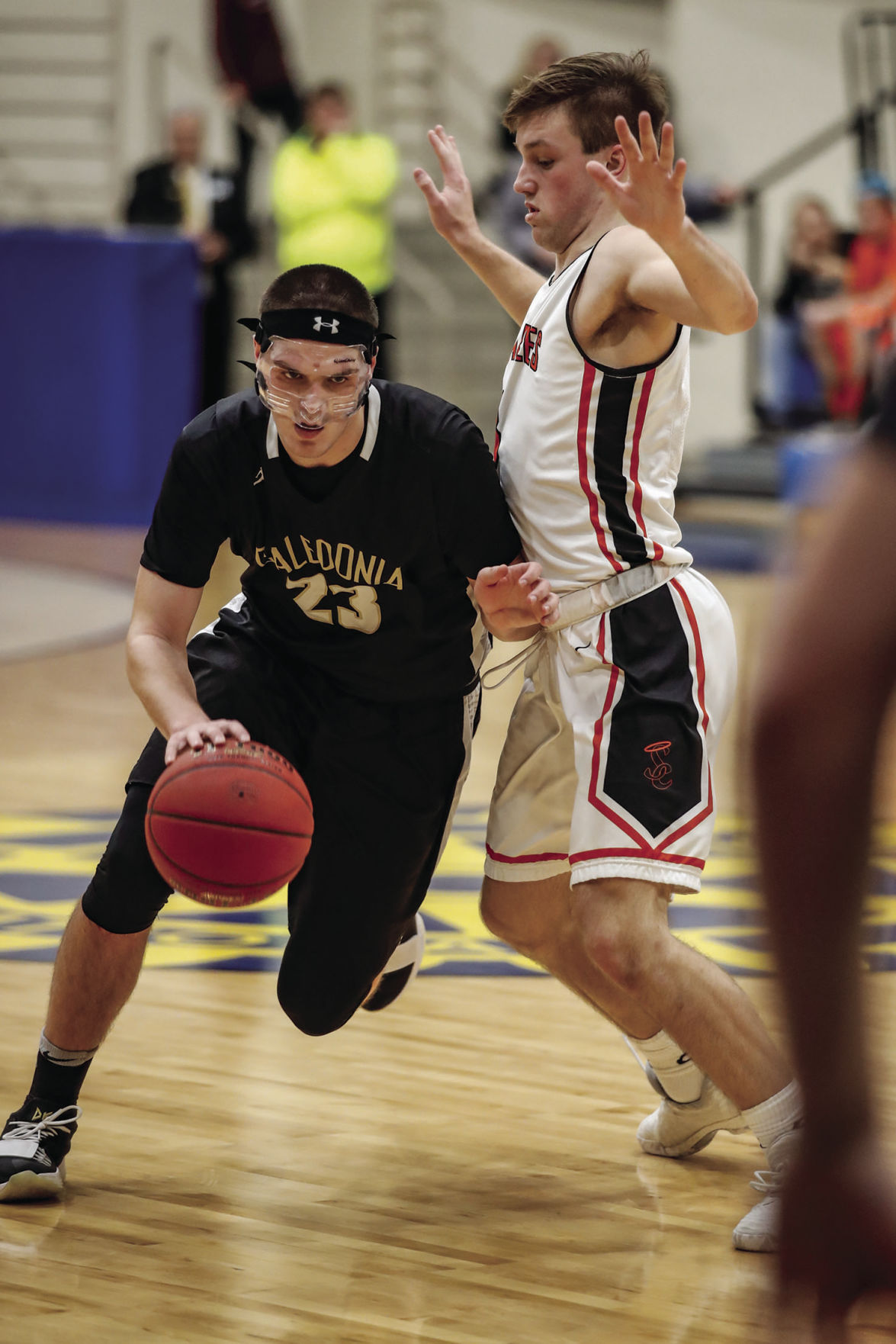 The King brothers have certainly racked up points, statistics and achievements while playing for Caledonia. Pictured here, Owen dribbles around a defender in a 2018 play-off game. 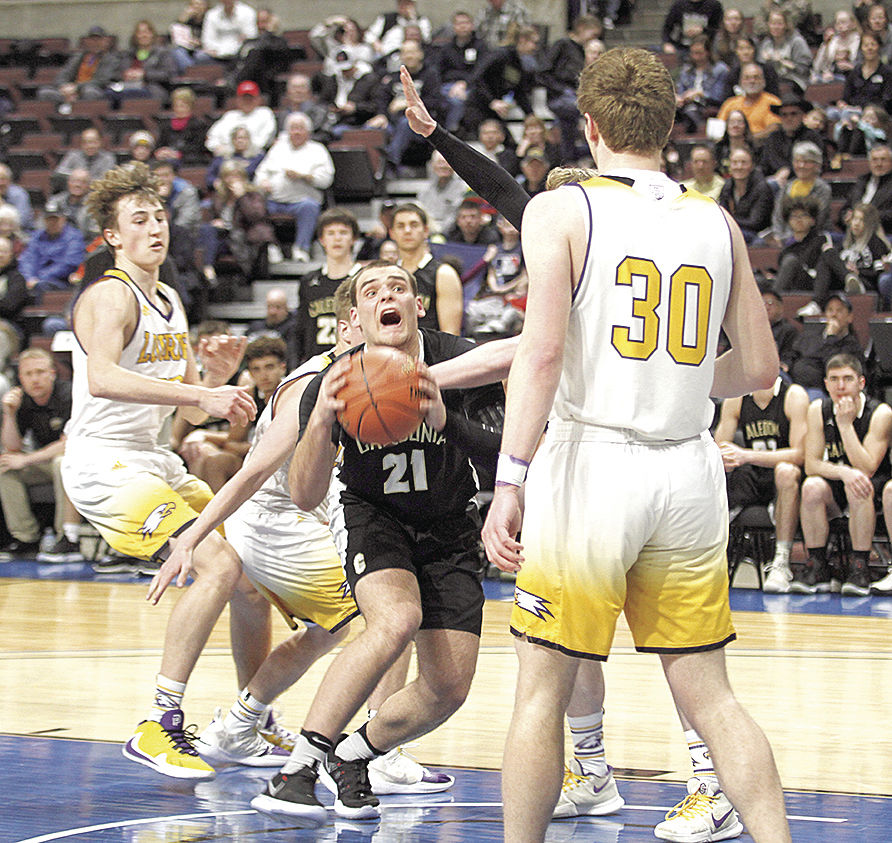 Noah King works his way through a pack of Rochester Lourdes defenders during a play-off game this past season. 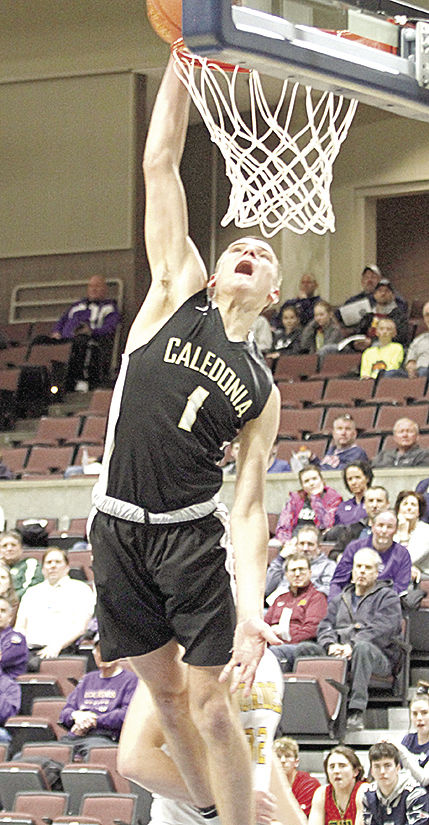 The King brothers have certainly racked up points, statistics and achievements while playing for Caledonia. Pictured here, Owen dribbles around a defender in a 2018 play-off game.

Noah King works his way through a pack of Rochester Lourdes defenders during a play-off game this past season.

If the King family hasn’t been playing or coaching school sports, they’ve definitely been thinking about them.

“I’m excited to play for a winning program with my teammates,” he said.

Previously, Owen played two seasons with the SDSU Jackrabbits and played 33 games in his freshman year while averaging four points per game. In his sophomore year, he played 17 games.

Caledonia Boys Basketball Coach and father Brad King said Winona State will be a great fit for him and he is also transferring with SDSU teammate Alou Dillon.

Speaking of the senior, Noah recently announced he committed to Kirkwood Community College in Cedar Rapids, Iowa. After decommitting from SDSU, Noah reset his search for a different school.

However, his second recruiting process was more difficult due to the COVID-19 pandemic. Whereas Noah could visit campus and meet coaches in person, the stay-at-home order shuttered that opportunity.

“Recruiting was different and a little tougher during the quiet period, because I could only try to build relationships with coaches over the phone,” he said.

In addition to playing basketball for the Eagles, who have won two national championships in the last five seasons, Noah is looking forward to earning a degree in education, living on campus and meeting new people, he said.

Brad said junior college gives Noah the opportunity for really good basketball and in the future, he could make the decision to stay at Kirkwood or choose another school.

Noah averaged 23 points and 6 rebounds per game this past season. He was also named to the Associated Press all-state third team. The Warriors posted a record of 28-1 and were set for the basketball state tournament before it was canceled.

The youngest King is still fielding offers from several schools. Eli has received three football offers from Minnesota, Iowa, Iowa State and recently the University of Notre Dame, and one basketball offer from Northern Iowa.

The soon-to-be junior said he wants to continue playing basketball or football after high school.

For now, he’s enjoying time with his brothers at home during the stay-at-home order.

“We have been working out a lot. We do a lot of basketball drills and also other body drill like jumping, speed and agility work, while also lifting weights,” he said.

Brad added the offers from colleges have kept the family occupied during this time.

“It’s truly a team award,” he said. “The only way you win that award is with great success as a team and that comes down to players being successful.”

Brad added that it comes down to communication as the biggest key for a good coach. Coaches have to communicate their knowledge to their players. The second part of a good coach is knowing where to put people in situations where they can be successful.

He also attributed the success to assistant coaches who help push them in the right direction.

Beyond the game, Brad said they’re coaching sports, but also coaching players how to handle life, especially during the pandemic.

“It’s frustrating for everybody. Just like in life, you get dealt something, but you can’t sit there and dwell on it,” he said.

He encouraged his players to enjoy the last game against Stewartville, earning the Warriors the section championship and a trip to state.

“I told them, ‘Let’s enjoy this, we’re fortunate to have fans for this game. Leave it all on the court,’” he recalled.

Once the Minnesota State High School League (MSHSL) canceled the event, the coaches sat their team down and talked about it. And though it was a sore disappointment, Brad encouraged them to move forward.

“I thought they did a great job of that, just like they did every game and practice,” he concluded.