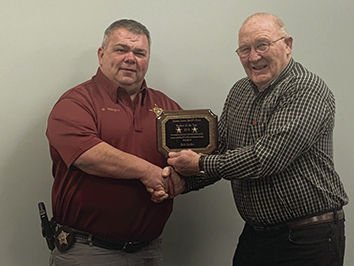 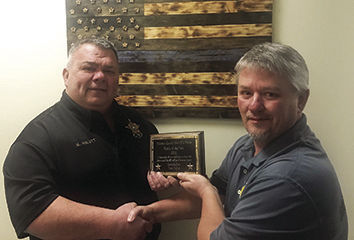 Sheriff Inglett with Tom Twite, Posse Rookie of the Year.

Sheriff Inglett with Tom Twite, Posse Rookie of the Year.

At the site of a fatal automobile/pedestrian collision near Hokah on Highway 16 just before the Christmas holiday, the drone was deployed to take aerial video footage of the scene for investigators, as well as provide some still shots of evidence from above.

A second deployment occurred in rural Brownsville Township, when officers utilized the drone to serve as an “eye in the sky” as they closed in to serve a search warrant. The drone kept watch from above “So that if people ran we could tell which way they went,” the sheriff said. “One time when we served a warrant at that particular residence, we ended up tracking a guy all the way to the (Mississippi) river.” That lengthy chase was eventually brought to a successful conclusion by using the department’s highly-decorated canine. During the more recent search, “We stayed over public property with the drone,” the sheriff confided. “But it’s got a really phenomenal camera system on it.”

Members referred to the large flying unit as “a very stout, strong drone,” with the ability to carry and drop payloads. Typical items that the drone can haul include a life vest for a person struggling in the water, or even a line that someone in need could tie up to.

“I’m excited,” Inglett said. “I think we’re going to come up with uses we hadn’t even thought of  for this unit.”

The Sheriff’s Department currently has two certified drone pilots. As more members train, as many as 10-12 pilots could be utilized, with two pilots (one to fly while the other monitors cameras) deployed during a typical search or rescue operation.

The posse has now outfitted a 1996 Ford ambulance donated by the Brownsville Fire Department as their drone command vehicle.

Posse members are continually trained for various emergencies, including search and rescue situations, mishaps on or in water or ice, chemical spills, and more.

In other news, posse members accepted the resignation of Alex Esser as vice president, and elected Josh Johnson to serve in that post. Jeff Babinski, Larry Kruse, and Eric Jervis were elected to their initial (three year) terms on the posse’s board of directors while John Esser and Larry Becker were elected to  their second terms as directors.