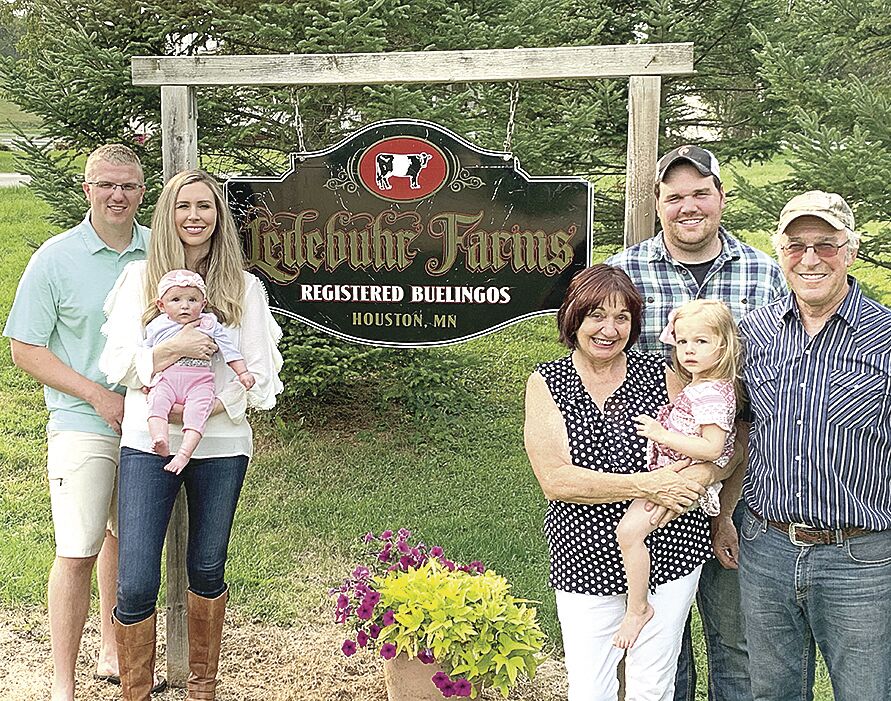 From left: Jesse and Andrea Sylvester, holding Lily Sylvester. On the right side: In back is Mark Ledebur, in front is Carmel Ledebuhr holding Charlotte Sylvester, and Larry Ledebuhr. 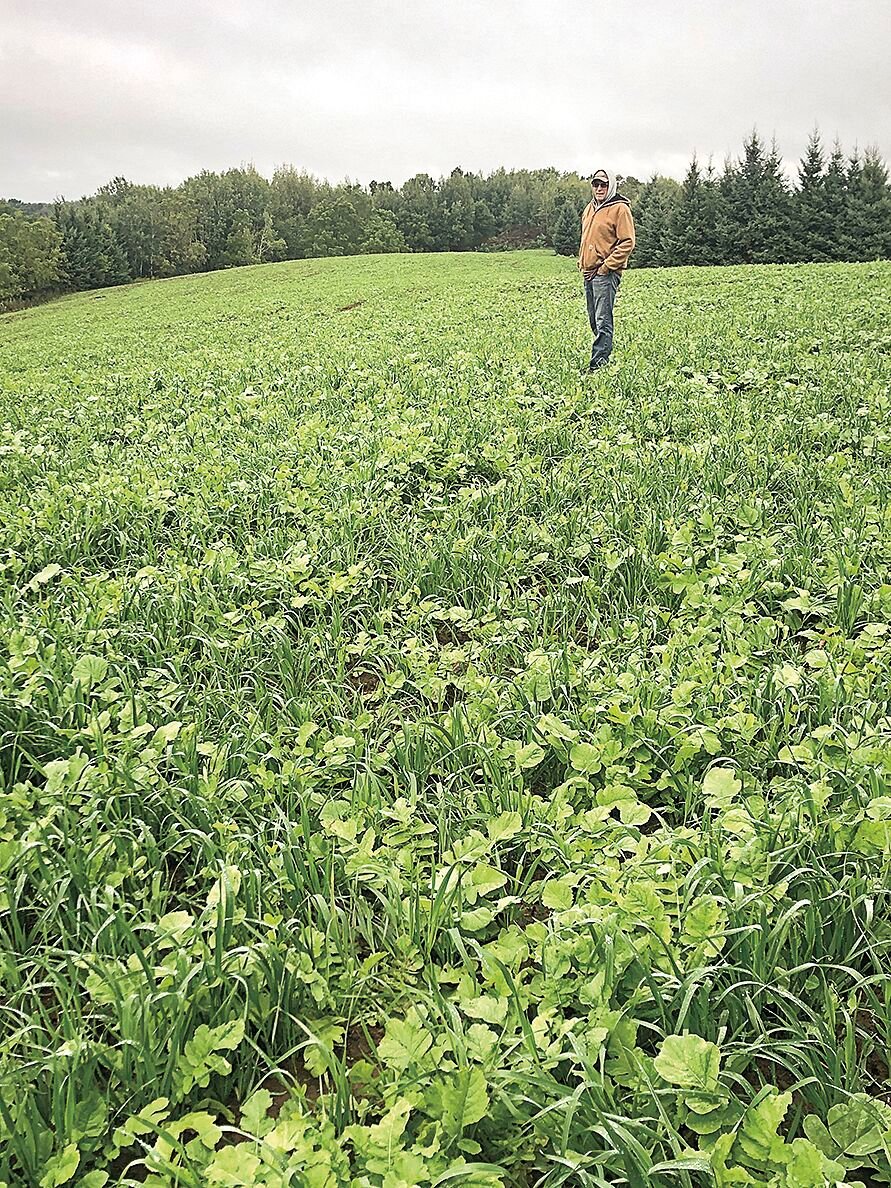 The cover crop picture with Larry in the background consists of a mix of oats, radishes, and Austrian winter peas.  It was planted this summer following a crop of small grain.

From left: Jesse and Andrea Sylvester, holding Lily Sylvester. On the right side: In back is Mark Ledebur, in front is Carmel Ledebuhr holding Charlotte Sylvester, and Larry Ledebuhr.

The cover crop picture with Larry in the background consists of a mix of oats, radishes, and Austrian winter peas.  It was planted this summer following a crop of small grain.

The Root River Soil and Water Conservation District (SWCD) is proud to announce this year’s Conservationist of the Year.

The Ledebuhr family produces crops and beef and are this year’s recipient. The Ledebuhr family consists of Larry and Carmel along with daughter Andrea and her husband Jesse Sylvester, who live in Florida.  Son, Mark Ledebuhr works on the farm in Mound Prairie Township along with his girlfriend, Reba.

The Ledebuhrs own around 1,200 acres with a mix of wooded, pasture, and cropland. They also rent another 80 acres of cropland.

The original farm was purchased in the early 1950’s by Larry’s father and grandfather. Over time additional acres were purchased and improvements made by the current family.

Diversification of agricultural products has been their focus over the years with the current operation focusing on raising beef, grain, hay, and timber.  The managed land is a mix of valley and ridge-top acres that drain downstream into the Root River Watershed.

With the varied landscape that includes everything from highly erodible land (HEL) on the hillsides to wetland conservation areas in the valley their farm is pretty common to others in Houston County.

With that said, many areas of Houston County’s Karst area are unique when compared to most areas of the state.

The Karst geology of southeast Minnesota, known for its shallow soil overlying limestone rock is vulnerable to groundwater contamination due to land uses on the soil surface.

Knowing this, the Ledebuhrs have been conservation-minded and extremely proactive while implementing conservation practices that protect our vulnerable natural resources while producing their agricultural commodities.

What sets the Ledebuhrs apart is their way of continuously finding ways to use best management practices to preserve the most vulnerable areas of their farm while looking for ways to diversify and improve their farming operation.

On their managed acres you’ll find many of the crop production acres that employ contour strips, waterways, and push-up ponds along with larger grade stabilization structures on their row-crop acres.

All of these practices include the management needed to ensure that the practices continue to do their job into the future.

One of the larger conservation projects on the farm includes a grade stabilization structure that was built in 2005.

This project included funding through NRCS EQIP program and allowed for improvements both on the Ledebuhr property and to downstream neighbors.

These improvements provide for reduced flood potential and sediment flow to downstream areas while also providing an abundance of wildlife habitat.  The structure is approximately 28 ft. high with a 24 ft. wide top and includes a 5 acre pond with a 1,000 acre drainage area.

In addition to reducing erosion through structural practices, Ledebuhrs have been using cover crops since the 1990’s.

Cover crops provide a soil covering during times when a commodity crop isn’t being grown.  A typical cover crop of rye will follow soybean harvest in September or October.  In addition, a multispecie cover crop is seeded following an oat harvest in July or August.

Not only do these cover crops reduce erosion from rain and wind they also improve soil health over time by increasing crop diversity thereby improving the soil microbial population. This, in turn, increases soil organic matter and nutrient cycling; all very important for crop production as well.

On their wooded acres, the Ledebuhrs have implemented timber stand improvement strategies that reduce the negative effect of invasive and non-crop trees while improving the woodlands for commercial timber harvest.

They have also improved their cattle pasture by removing invasive brush species such as multiflora rose, honeysuckle, and buckthorn.  By reducing the invasives, they have improved the forage production on their grazing acres.

Livestock have always been an integral part of the Ledebuhr family farm.  Over the years the family has grazed many types of beef cattle, sheep, and cervidae (deer).

The current beef herd includes the Buelingo breed but has also included Belgian Blue and Piedmontese as well as cross breeds.

Interestingly, Ledebuhrs have enjoyed their share of success in the beef show ring, having won championships at the American Royal and World Beef Expo shows for their prize-winning Belgian Blues.

Belgian Blue cattle are known for their tasty and tender meat but with a low fat content.  They have extreme muscling due to a naturally occurring mutation known as “double muscling”.

Another less common livestock species having inhabited the Ledebuhr farm was whitetail deer.  The family built the requisite 8’ deer fence around 15 years ago and bred deer that were used for outfitter hunting as well as antler development and sales. Due to the increase in CWD the family decided to step away from the deer business but continue with the purebred beef herd.

It is through their willingness to change and improve both commercially and through excellent conservation practices that the Ledebuhrs will continue their farming operation into the future.