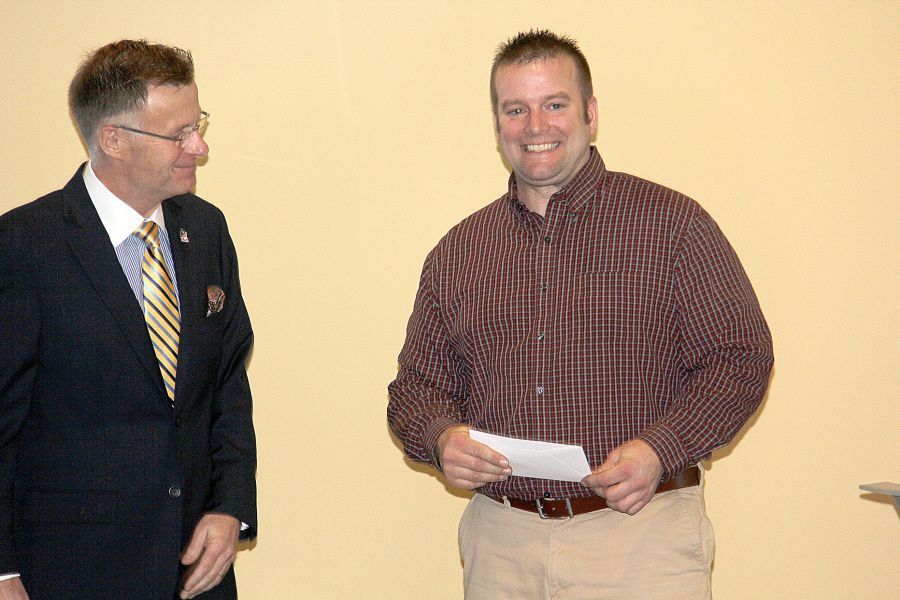 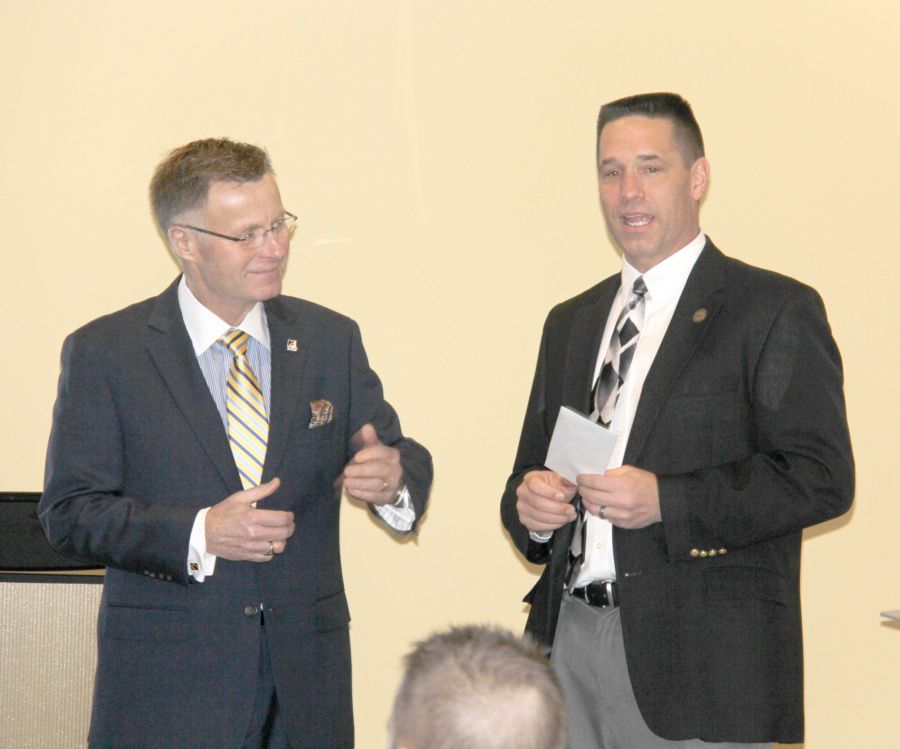 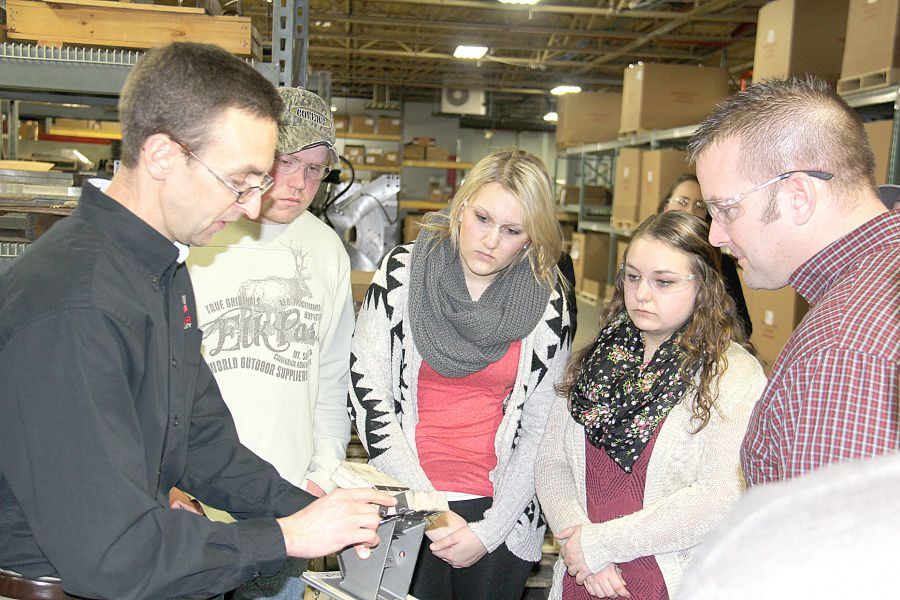 Daniel McGonigle/The Caledonia Argus Koehler, at right, and his students are given a demonstration of what Miller Ingenuity builds and provides to companies who manufature locomotives. Above, Randy Skarlupka, Vice President of Miller Ingenuity shows the Houston Industrial Arts students some of the products Miller Ingenuity produces.

Daniel McGonigle/The Caledonia Argus Koehler, at right, and his students are given a demonstration of what Miller Ingenuity builds and provides to companies who manufature locomotives. Above, Randy Skarlupka, Vice President of Miller Ingenuity shows the Houston Industrial Arts students some of the products Miller Ingenuity produces.

Koehler’s response to the question, “How Might American Manufacturers Attract the Best and Brightest Innovative Minds to Pursue Careers in the Manufacturing Industry” won him $2,000.

In addition, Miller Ingenuity surprised Koehler and his five students who joined him for the award ceremony, with an additional $5,000 for Houston High School to purchase equipment or supplies that will help students further their studies in the industrial arts so that they can pursue careers in manufacturing upon graduation.

“I must admit that I was pretty excited when I learned that someone from our region had placed in our national contest,” Steve Blue, CEO and President of Miller Ingenuity said. “When we read his submission, after the judges had completed their work, I was touched with his passion to pique high school students’ interest in this industry by giving them real hands-on experiences. It was then I suggested we invite him and some of his students to tour Miller Ingenuity and to award $1,000 to Houston High School to buy what they need to further their learning. But in the brainstorm session today with the students I decided they should receive $5,000. They had some really ingenious ideas!”

Koehler and his group of students gathered in the new “Creation Station” recently completed at Miller Ingenuity.

There they were led in a brainstorming session to think of items they might need for their industrial arts classroom.

The money is meant to put a dent in some of the items on their list which included a 3D printer, software upgrades and a design lab among other items.

The national contest, which received more than 30 submissions, was launched in celebration of the opening of Miller Ingenuity’s Creation Station, a Google-like think space in the middle of the factory.

Under the leadership of Steve Blue, Miller Ingenuity has undergone significant changes which has resulted in quadrupled total sales. The construction and opening of Creation Station is the physical manifestation of the culture change taking place. The contest, a first for Miller Ingenuity, was seen as a way to share how they gained their success in order to strengthen manufacturing in Minnesota and throughout the U.S.

“People have asked me why a rail manufacturing company in Minnesota executed a national contest for students in higher education,” said Blue. “My response – why not us? If the U.S. is to stay competitive in the worldwide manufacturing industry, we all need to be thinking differently and asking the hard questions about our future. This contest has served as a great conversation starter and we hope to take what we have learned and share in an open source way. Stay tuned!”

Koehler pleased with the award

He thanked the students who joined him in a tour of Miller’s facilities.

“I know you wanted to stay in school today and study, but thank you for being here today. And thank you Mr. Blue and the staff at Miller Ingenuity for your kind words. This was a surprise.”

The judges, which included professionals working in higher education and economic development, commented that Koehler’s submission stood out because it was problem and solution based. They were impressed with his recommendation to push high school students to not only learn the math, science and technology skills necessary for a career in manufacturing, but also to learn leadership and social skills so that teams can work together to create new solutions.

When asked what career advice he’d give his students, Koehler said, “I want them to keep an open mind, have a strong work ethic and stick with it. My goal through career and technical education is to provide as many opportunities to my students as I can so they can see the many facets available to them, and once they’ve developed a career interest, I want to steer them down that path.”

Miller Ingenuity is a railway component solutions company based in Winona, Minnesota. From their earliest days more than 60 years ago when their founder, “Rudy” Miller, invented the wick lubricator, they have demonstrated the ability to conceptualize, design, produce and deliver railroad parts that meet the current and emerging needs of the industry. Their continued innovations are driven by three core motivations: to take on customer challenges, to think more creatively about solutions, and, humbly, to be everyday heroes to their customers. They put these beliefs into action based on deep and “factory floor” relationships with customers and on an ability to invent, engineer, and deliver ingenious solutions.

The Miller Ingenuity 2014 Innovation Challenge launched in October and closed in December 2014. Contestants were required to submit a positioning paper that included: executive summary, recommendations, business case and action steps. In addition, only submissions that included a three-minute or less video that communicated a compelling and creative answer to the Challenge question were judged. To view the contest website, go to www.ingenuitychallenge2014.com.