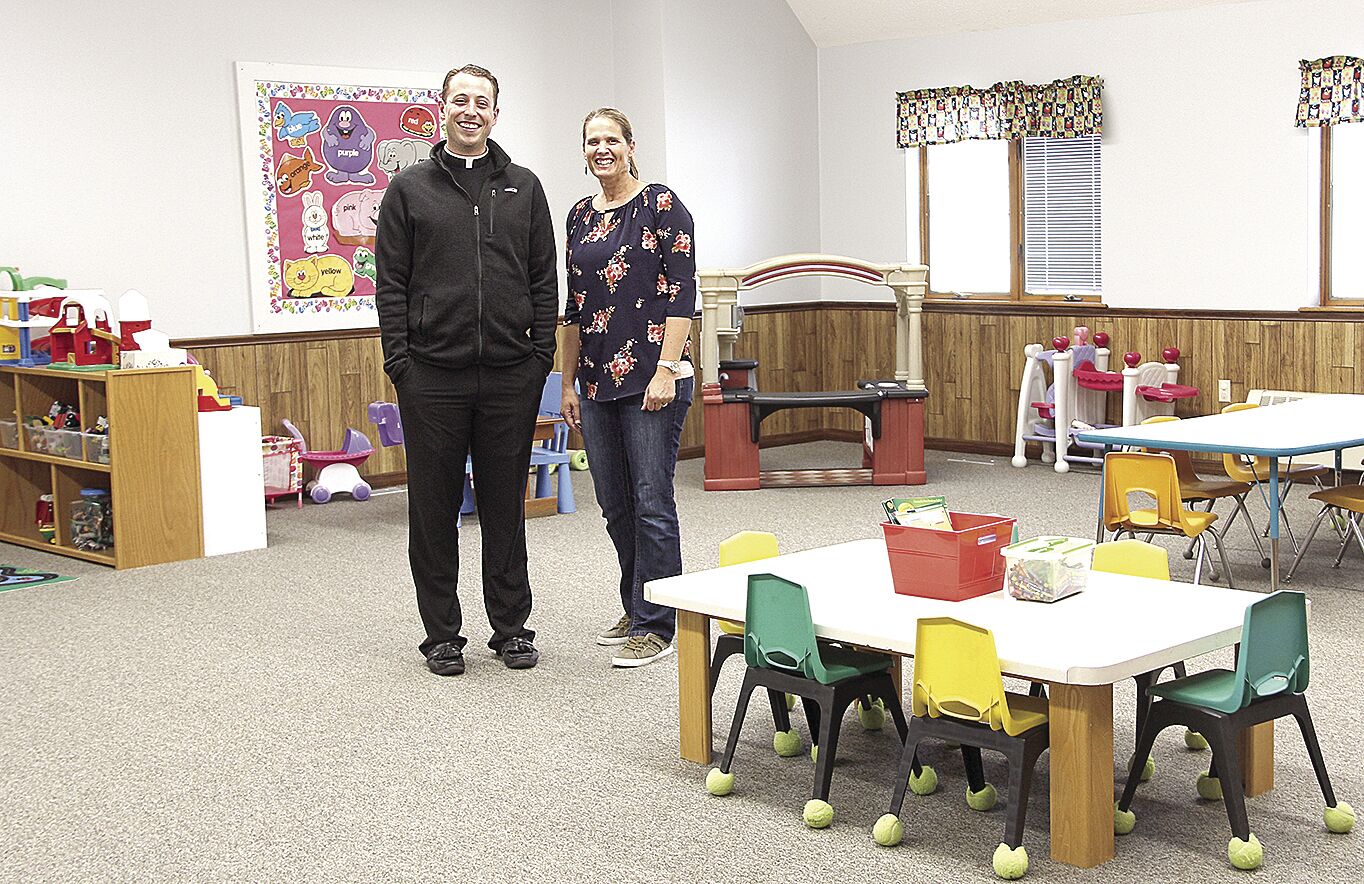 Father Matt Wagner and Sara Klug, director of Little Blue Jays Daycare, stand in the pre-k room. The pre-k room has a lot of fun activities for young learners. 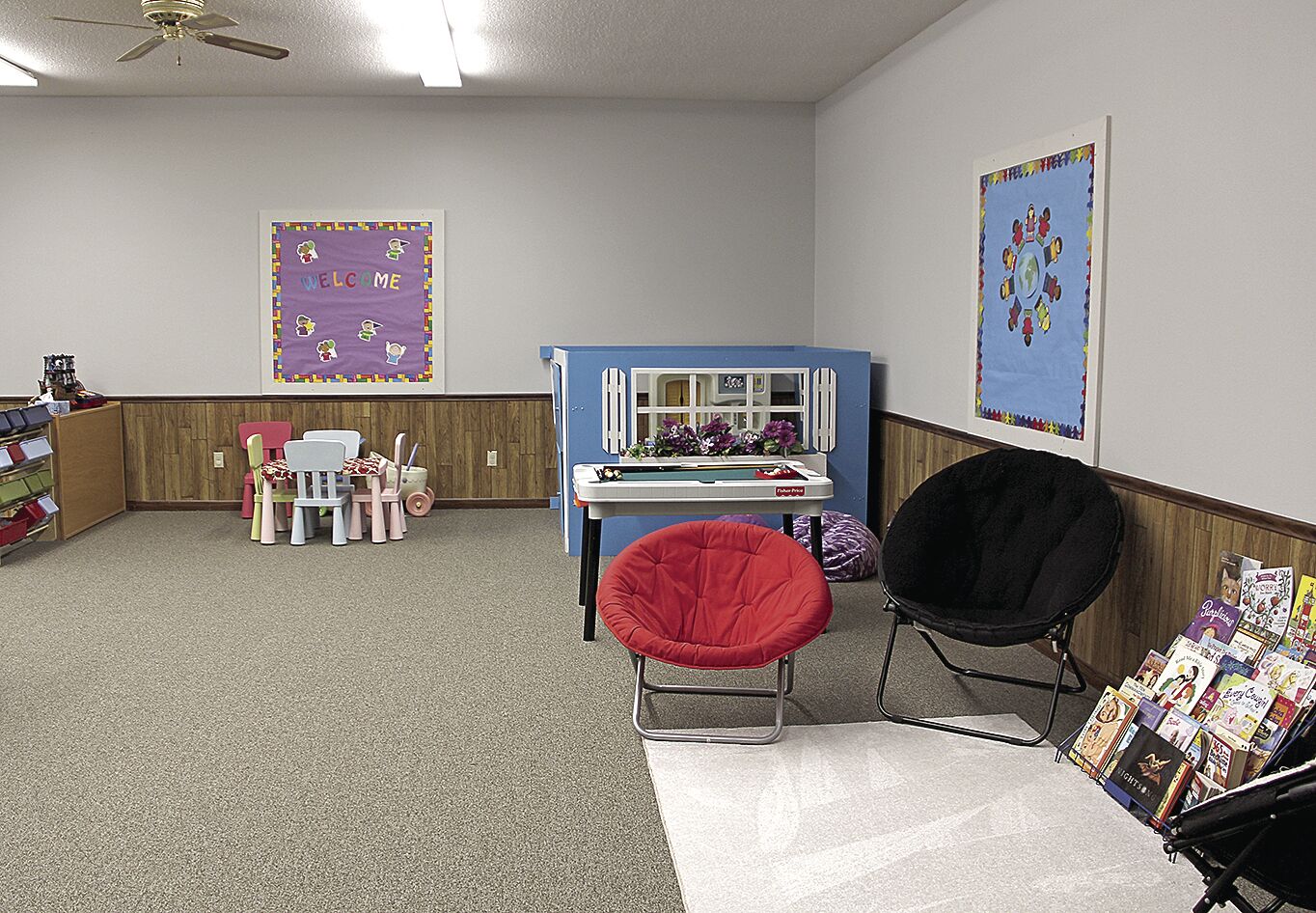 The school-age room has activities for older kids.

Father Matt Wagner and Sara Klug, director of Little Blue Jays Daycare, stand in the pre-k room. The pre-k room has a lot of fun activities for young learners.

The school-age room has activities for older kids.

They are some of our youngest learners in need of care during the week, and St. Mary’s School has provided a new place for little blue jays to nest.

Little Blue Jays Daycare is open Monday-Friday, 6 a.m. to 6 p.m. The daycare accepts kids as young as 31 months, with the request the child is potty-trained, and as old as school-age children. The daycare is open to all families in the area, no membership to the church is required.

St. Mary’s School started its daycare program for the 2021-22 school year, offering care for preschool and school-age children. It was a quick start, as the ability to have a daycare was already covered on its current educational license, the Rev. Matt Wagner explained.

It helped immensely that the preliminary work was done before he and director Sara Klug came on board. Former principal Rebecca Swedberg and a number of parishioners looked into the possibility of a daycare and put out a survey, he said.

The daycare committee recognized two needs that could be filled in one effort: provide another daycare option to the community and update the HVAC system in the school, which was failing at the time.

Once it was agreed upon to start the process, the HVAC was replaced, rooms renovated and Klug was hired in June.

Klug previously ran her own in-home daycare for 13 years in Caledonia, and then managed a daycare at LAX Fabricating in Spring Grove, for the children of employees.

The new daycare also received a lot of help from parishioners who had daycare experience and from preschool teacher Karen Loging, who helped with the logistics and putting the rooms together.

“As a whole, we’re very blessed. We had several parishioners who have experience,” Wagner added. “We have a very helpful community.”

There’s also a need for daycare in Houston County. Caledonia is in need the most, after La Crescent, according to Jeff Andrews, Early Childhood Business Consultant, Southern Minnesota Initiative Foundation.

“We want to help the community also, not just on our campus,” Klug said. “One of our parishioners decided to retire from daycare, more will be retiring in the next year. We’re hoping to be here and help the community out daycare-wise too.”

Klug is currently the main daycare staff, but she also has an aide helping out before and after school too. The school is also looking for a lead teacher to help as well.

Klug has the credentials to teach, which means students can get preschool and daycare in the same week. The 4K program is hosted Mondays, Wednesdays and Fridays, so students go to preschool on those days. On Tuesdays and Thursdays, they come to daycare. It’s flipflopped for the 3K program. This option offers more flexibility for families, and students to get computer time, physical education and library time.

School-age children who attend the daycare also have a homework hour after school. Klug said the purpose is get as much work done as they can in order to spend more time with their family when they go home.

The school has hopes of expanding the program to accept infants and toddlers, but that would require a little more legwork.

The school’s rates for daycare align with other daycares in the city and does accept the county’s childcare assistance program. The school has talked about offering financial assistance.