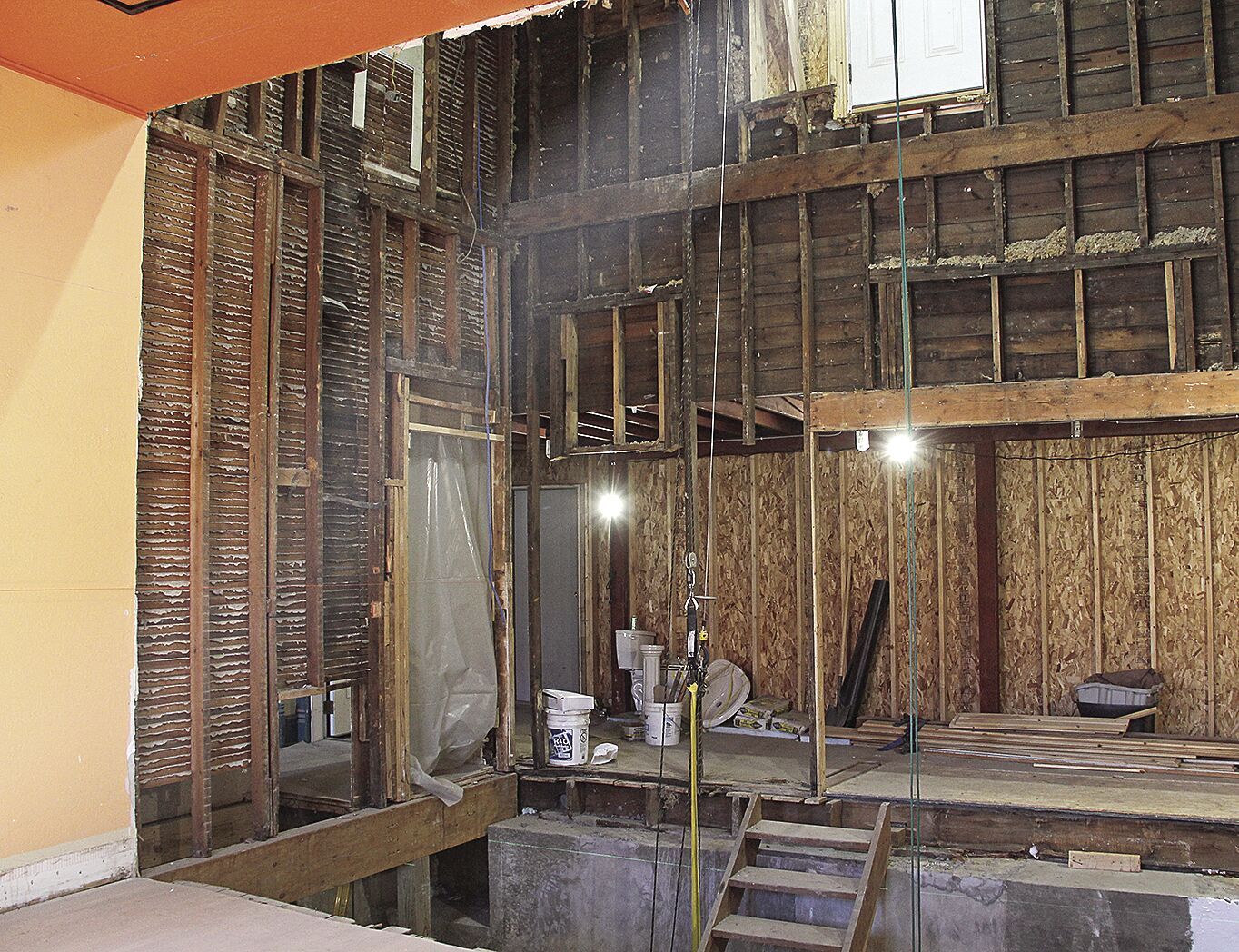 The cavernous space in Giants of the Earth Heritage Center’s historic building will be home to a new ADA-compliant elevator and a reconfigured space that will serve their needs better. 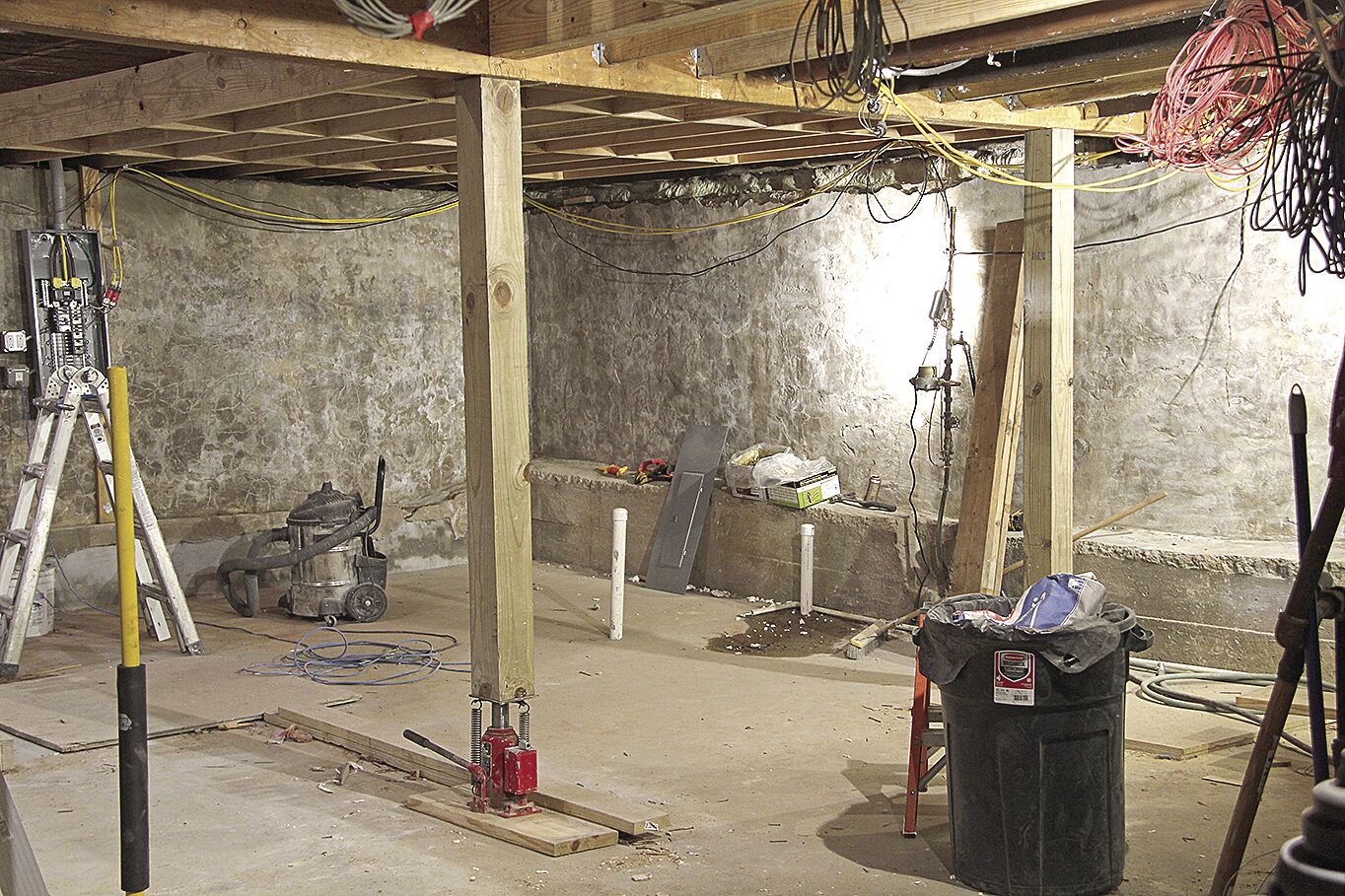 The basement will be home to the new kitchen and recording studio. 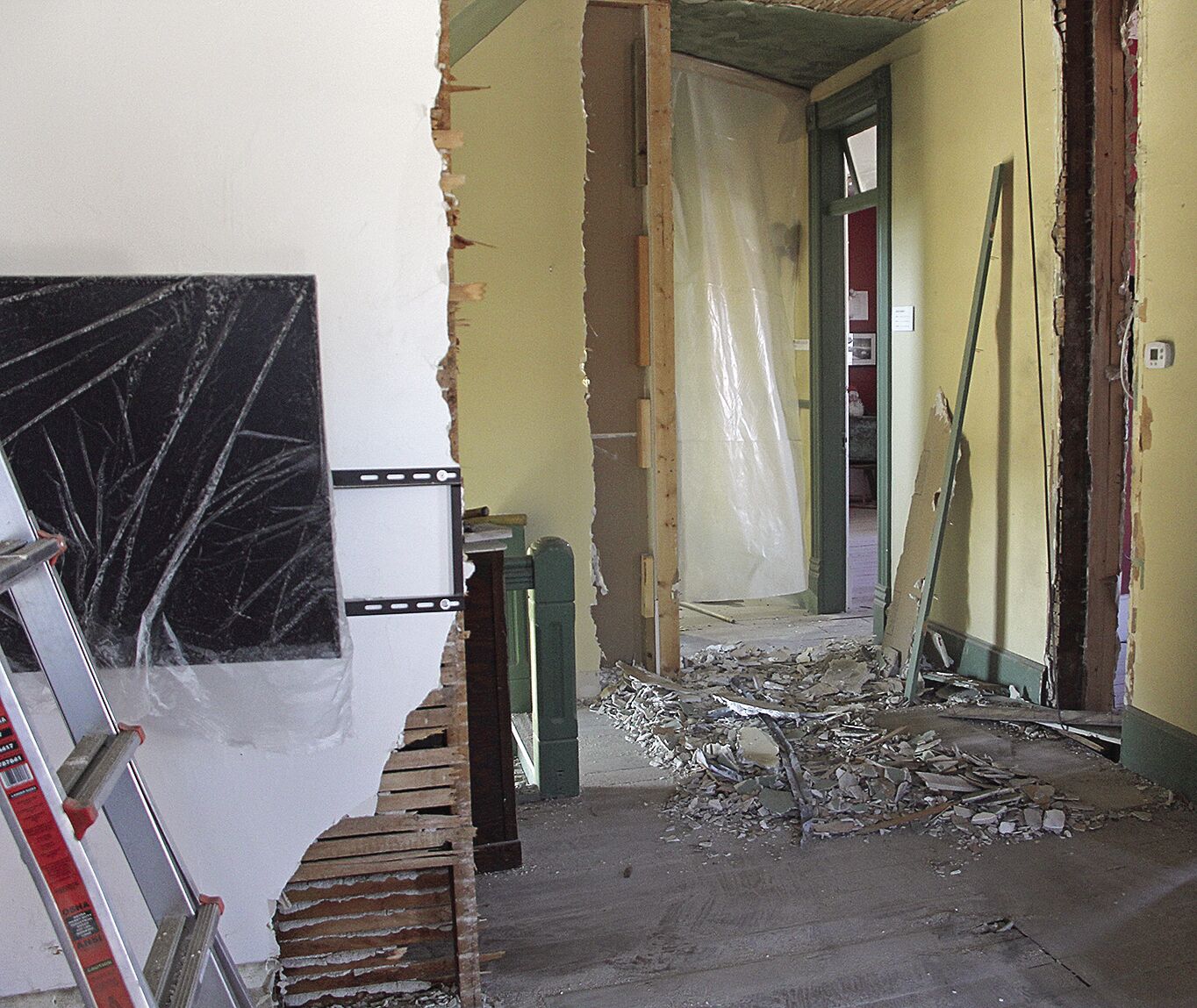 The second floor will feature wider hallways and exhibit space featuring history on churches once located in the area, discoveries of Native American items and students genealogical research. 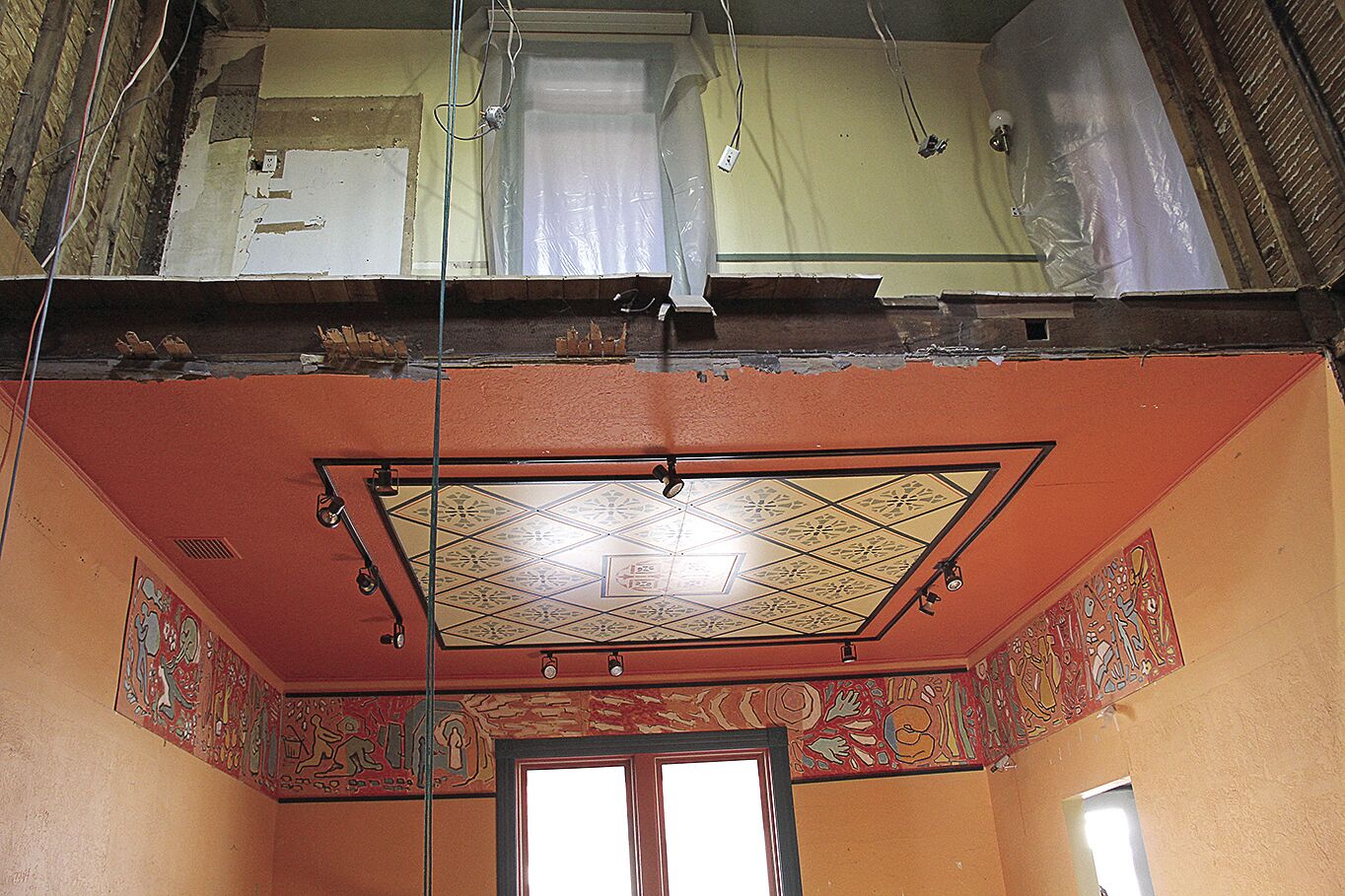 This view looks up from the first floor to the second floor at Giants of the Earth Heritage Center. 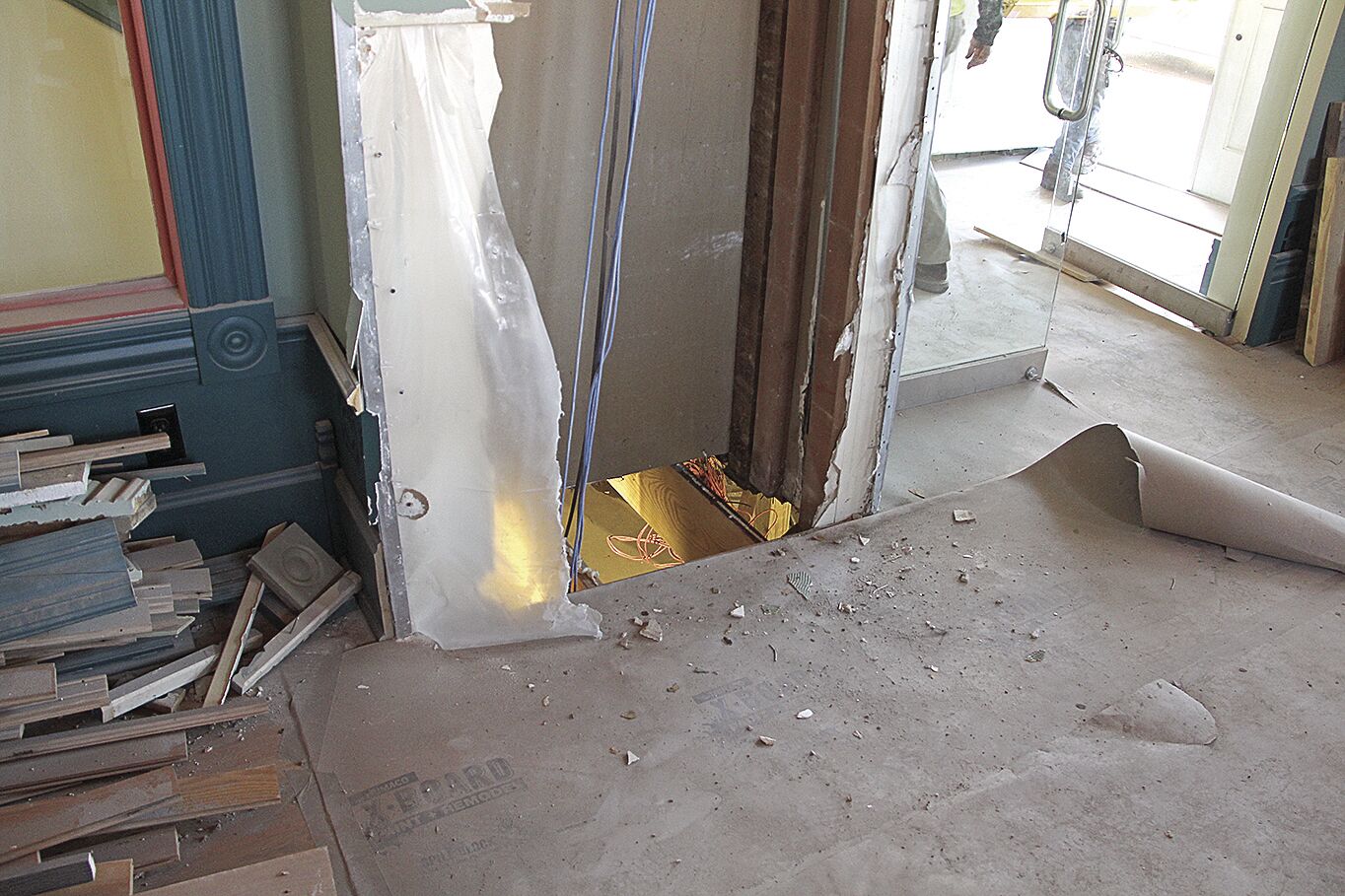 The chimney resided in this spot until recently. The building features an upgraded HVAC system, including air conditioning.

The cavernous space in Giants of the Earth Heritage Center’s historic building will be home to a new ADA-compliant elevator and a reconfigured space that will serve their needs better.

The basement will be home to the new kitchen and recording studio.

The second floor will feature wider hallways and exhibit space featuring history on churches once located in the area, discoveries of Native American items and students genealogical research.

This view looks up from the first floor to the second floor at Giants of the Earth Heritage Center.

The chimney resided in this spot until recently. The building features an upgraded HVAC system, including air conditioning.

After a four-year process and waiting through a pandemic, Giants of the Earth Heritage Center in Spring Grove will finally have its elevator and a new remodel.

Executive director Bill Fried said the nonprofit organization worked with the Minnesota Historical Society on the plans and how to maintain the historical integrity of the 1890s building. They also worked with an architectural firm from Rochester on drawings of the reconfigured space.

“The value of the building is increased immensely with the accessibility issue behind us,” he explained. “In the COVID world we’re living in, it’s a really nice time to do it with no people in to visit.”

The building will feature an ADA-compliant elevator that will go up to the third floor and all the way down the basement. The elevator will have two doors, and open up to both sides on the first floor.

“A great majority is making the building more functional,” Fried said. Since it’s a large construction project, it only made sense to reconfigure the spaces to better serve Giants’ needs. Pre-COVID, Giants hosted several large and small events, the Norwegian Ridge Language and Culture Camp and holiday events.

The group hired local contractor Four Seasons Maintenance for the construction, which started in February. In the basement, workers dug down and eventually found the previous foundation to the building, which required a great amount of work to dig and pour new concrete. They also shored up the small crawl space below the gift shop and replaced beams to further bring the building up to code. Many adjustments were made to the building before building codes were required, Fried said.

In the basement, there will be a designated recording studio, and a kitchen that is a step below a commercial kitchen featuring new refrigeration, a dishwasher and stainless steel appliances and work spaces. The kitchen was previously located on the first floor and that only featured a household range and sink. Now, that space will be a butler’s pantry next to the elevator.

“In this particular space with an old building, we have to facilitate moving things around,” he explained. “When we put on an event, we had no place to put what was normally out – tables, chairs, materials you need for a dinner, had to come from a distance.”

On the first floor, the elevator opens up on two sides. The backside will enter into the butler’s pantry and serve as another access point to the hallway behind the stairs. There will also be a new ADA-compliant bathroom installed as well. The front side exits to the room opposite the gathering hall.

Going up to the second floor, the elevator will provide new access to exhibits featured upstairs, including Joseph Langland’s history in Spring Grove, an exhibit on historical churches once located in the area, farming in the driftless region, discoveries of native American items and students’ genealogical research. Fried said the exhibit area will be expanded about 40%. Much of the second floor is under construction too, as hallways will be wider.

As for the heating and cooling of the building, the old chimney inside the building was removed and a modern HVAC system was upgraded for more efficiency.

The plan for the elevator came after the building was placed on the National Register of Historic Places in 2017. That process required an analysis done by a historical firm in Rochester to verify the building was architecturally significant. The architects were overjoyed when they saw the Ballard House Hotel’s design featuring crown moldings and original construction.

Costs for the remodel and elevator are expected to be in excess of $300,000, but Giants won’t know the final cost until the work is done. However, it’s all for the benefit of visitors, local history and young learners.

“The general public has something to look forward to. It’s not the same old building,” Fried said.

Much of the artwork and design elements from the original building will be restored. The work is expected to be completed in May and Giants hoped to have access to the elevator in that month. A soft opening is in the works for May and June, with a larger event planned as COVID regulations allow.

“As we open up and have our little 21st century renaissance, we’re able to accommodate you much more successfully,” Fried said.

Once this project is complete, the organization will be able to take a deep breath and relax, Fried said. They’ll also get to enjoy entertaining people in the new space.

“The work allows us to upgrade our programming more, expanding ability to volunteers to come in and work with us,” he said. “Prior to COVID, we did tours at least once a month here. People are going to want to come and see this.”

During the bulk of the pandemic, Giants switched much of their programming to a virtual platform, including Juletrefest that can still be seen on their website at https://giantsoftheearth.org. Likely, Giants will continue some virtual events to provide an outlet for people who cannot travel to Minnesota.

Currently, there are several groups in Norway who are coordinating with Giants and other Norwegian historical groups, such as Vesterheim Museum in Decorah, Iowa and Norskedalen in Coon Valley, Wisconsin, to study why Norwegians emigrated to the Midwest.

This all adds up to the bicentennial celebration in 2025, marking 200 years since the emigration. Organizations in the U.S. are encouraging visitors to explore all of the historical sites and museums in the Midwest and are cross-referencing each other.

As for the local center, Giants continues to offer genealogical services, Norwegian Ridge Language and Culture Camp, special events for Syttende Mai (May 17) and the holidays and a sixth grade academy (this year, seventh graders will finish their family history projects, as those were cut short by the pandemic).

This year’s Norwegian Ridge Language and Culture Camp format might look a little different due to COVID, but prospective participants should watch the center’s website or Facebook page for the latest information.