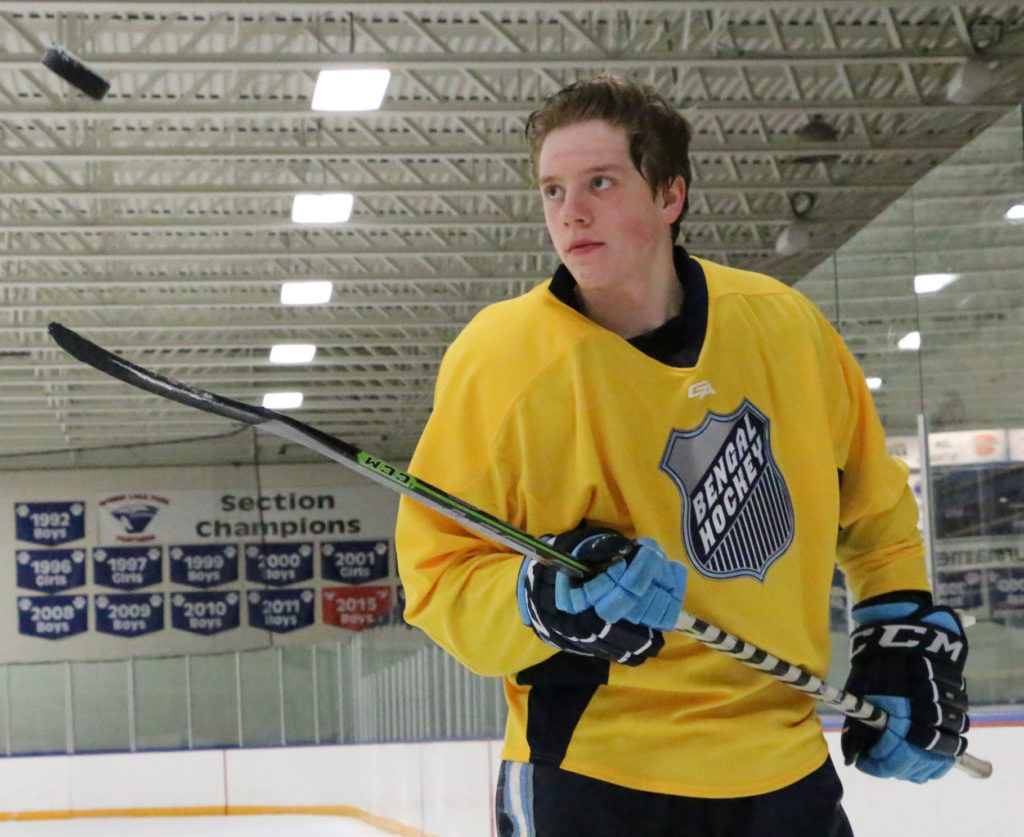 Bryce Brodzinski is following a similar path as his three older brothers with a standout season for Blaine. Jonny and Michael are now with NHL organizations while Easton is in the USHL and is committed to St. Cloud State, where Bryce plans to play. (Photo by Sam Herder) 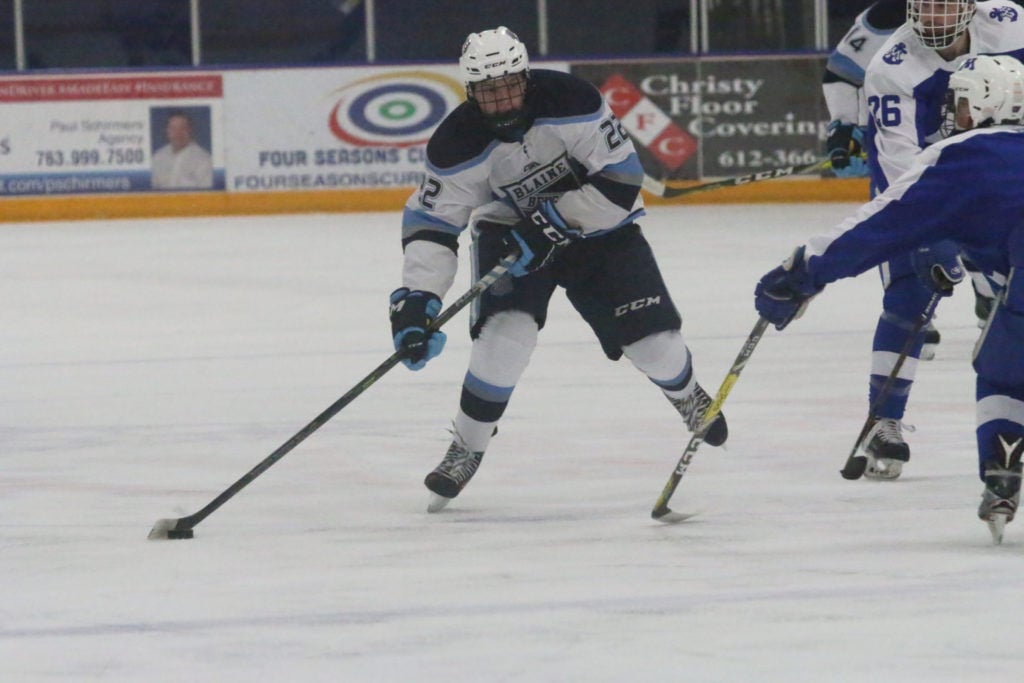 As a sophomore, Bryce Brodzinski leads the Bengals with 13 goals and 30 points. (Photo by Sam Herder)

Bryce Brodzinski is following a similar path as his three older brothers with a standout season for Blaine. Jonny and Michael are now with NHL organizations while Easton is in the USHL and is committed to St. Cloud State, where Bryce plans to play. (Photo by Sam Herder)

As a sophomore, Bryce Brodzinski leads the Bengals with 13 goals and 30 points. (Photo by Sam Herder)

Northwest Suburban Conference boys hockey coaches probably weren’t overly enthused when looking through 2016-17 rosters and getting to Blaine’s. On that list was a sophomore with a familiar last name: Brodzinski.

Bryce Brodzinski is the last brother from a long line of hockey success. And in his first year at the varsity level, he’s showing the Blaine-Brodzinski pipeline remains as strong as ever.

With three older brothers doing it before him, Bryce has began carving a similar path.

Jonny played college hockey at St. Cloud State, where Easton is committed to and Bryce announced his commitment to before his sophomore season.

It’s been a family tradition of sorts, although Michael played college hockey at Minnesota. Mike Brodzinski, the brothers’ dad, was a former SCSU captain.

Hockey is in Bryce’s blood. He naturally fell in love with the sport growing up.

“It’s definitely one of my favorite sports,” Bryce said. “Nothing appealed to me except for hockey. Hockey has just been the best thing in my life forever.”

He has logged plenty of miles, not just playing hockey, but watching his brothers play varsity. No matter the distance, Bryce was there. He said he’d pay close attention, watching every minute of every game.

If he learned something from watching his brothers play, it’s showing on the ice this season.

Chris Carroll is in his third year as Blaine’s head coach. He coached Easton and worked with Jonny and Michael off the ice with Blaine’s strength and conditioning program. It’s been noticeable for Carroll that he’s once again around another Brodzinski.

“The big one is their ability to shoot,” he said. “They all can shoot. They all can score. Even the fun stuff, like his mannerisms, how he talks, he reminds me of his brothers. He looks a lot like Jonny physically. Every time I hear him talk, I think of Easton. There’s a ton of similarities.”

The Brodzinski boost on the ice is nice for Carroll. The 2015-16 Bengals finished 22-5, but graduated a ton of seniors. Bryce has stepped in to fill the scoring void as Blaine began its season 8-2-1. The Bengals have suffered five straight losses since, though. But it’s interactions off the ice that makes coaching Bryce fun for Carroll.

“He’s a good kid,” Carroll said. “If I was 16 years old, I’d want to hang out with him. He’s a fun kid to be around. All the Brodzinski kids are good kids. When they’re good players, but they’re also good kids, that makes coming to the rink more fun.”

Good kids and good players, but competitive nonetheless. It results in interesting family holidays when the Brodzinski brothers determine who’s best at any given competition.

The numbers speak for themselves. As a sophomore, Bryce is leading the team with 13 goals and 30 points. He plays center on the top line, a big responsibility for a young player that asks him to score and play defense.

But it’s a role that he has fulfilled in terms of coach’s expectations and then some.

“He’s just a gifted shooter,” Carroll said. “He scores, and that’s exemplified by his stats. But he does a lot of other things really well. He’s a good center. He’s instinctively really, really good. He’s starting to complete his game. I know a lot of times, and rightfully so, with Easton and Jonny and Michael, it’s ‘they score, they score.’ That overshadowed the other stuff they could do. (Bryce) can distribute, but he’s also really responsible defensively.”

Carroll said Bryce’s sophomore campaign so far hasn’t surprised him. He expected it. And Bryce expected it too and was confident coming in, which he credits to his brothers.

“They taught me my whole life on what I need to do and how I need to do it,” Bryce said. “I came in pretty confident and strong. I got a goal and an assist in the first game, so it just kept going on from there.”

Following in your brother’s footsteps is rarely an easy task. But Bryce’s path looks paved nicely right now with his standout sophomore season and commitment to SCSU.

He said the commitment was easy to make and was made easier knowing he’d get a chance to play with Easton when the two were freshman and senior.

Expectations, of course, are high for Bryce to succeed like his brothers have. It’s something he’s well aware of.

“There’s a little pressure there because they are all really good and you want to keep that family name going,” he said.

The wheels are in motion, though. The scouts saw it during the recruiting period. And Bryce’s head coach saw it entering this season.

“He’s got a bright future,” Carroll said. “I know his brothers probably might not like it, but I remember sitting at the preseason scrimmages and he knew exactly what he needed to do this year to kind of be better than his brothers as a sophomore. And he might be. He might be. It’s fun to watch.”