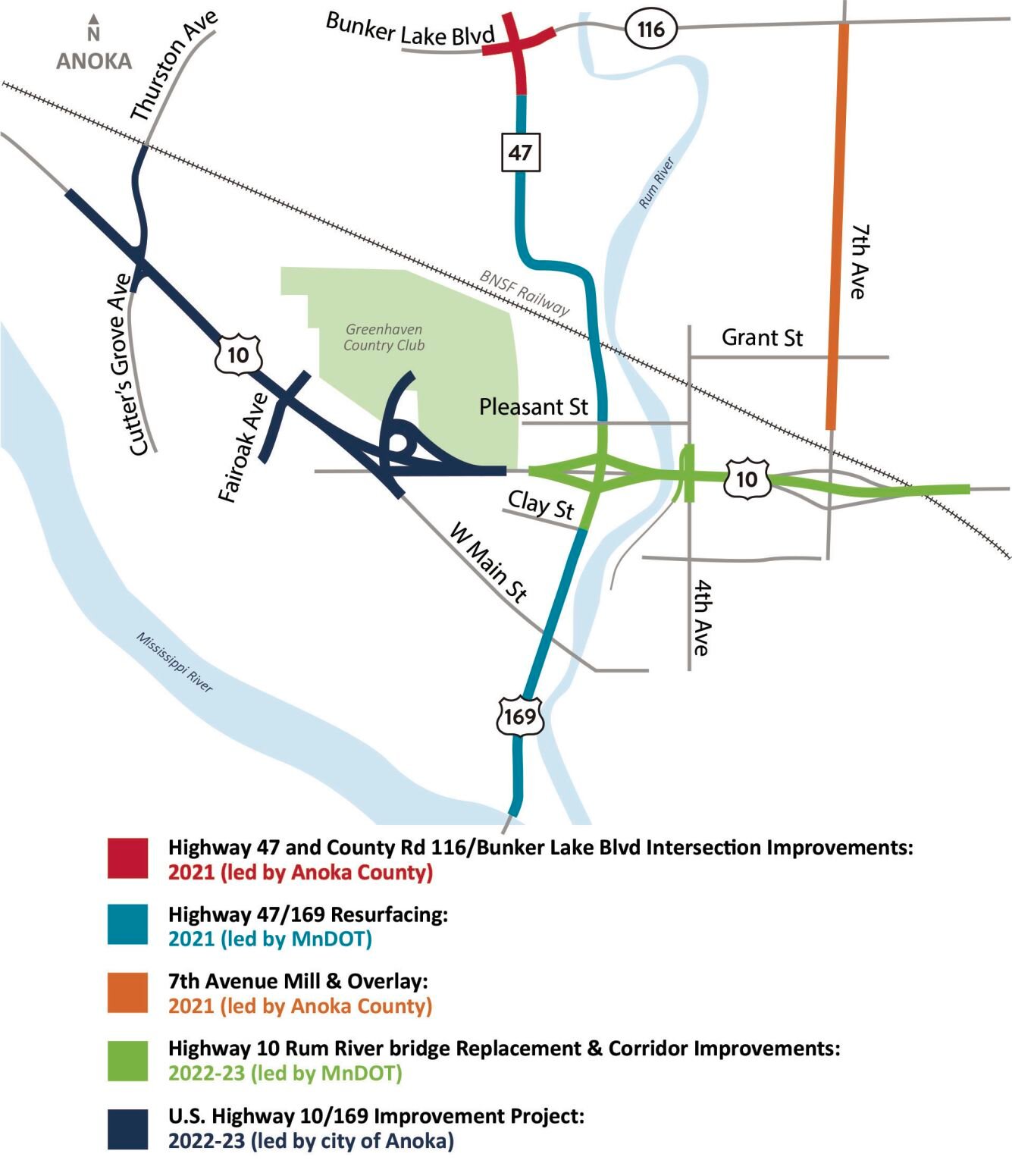 This map shows state and county roadwork in Anoka planned for 2021 through 2023. (Map adapted from MnDOT) 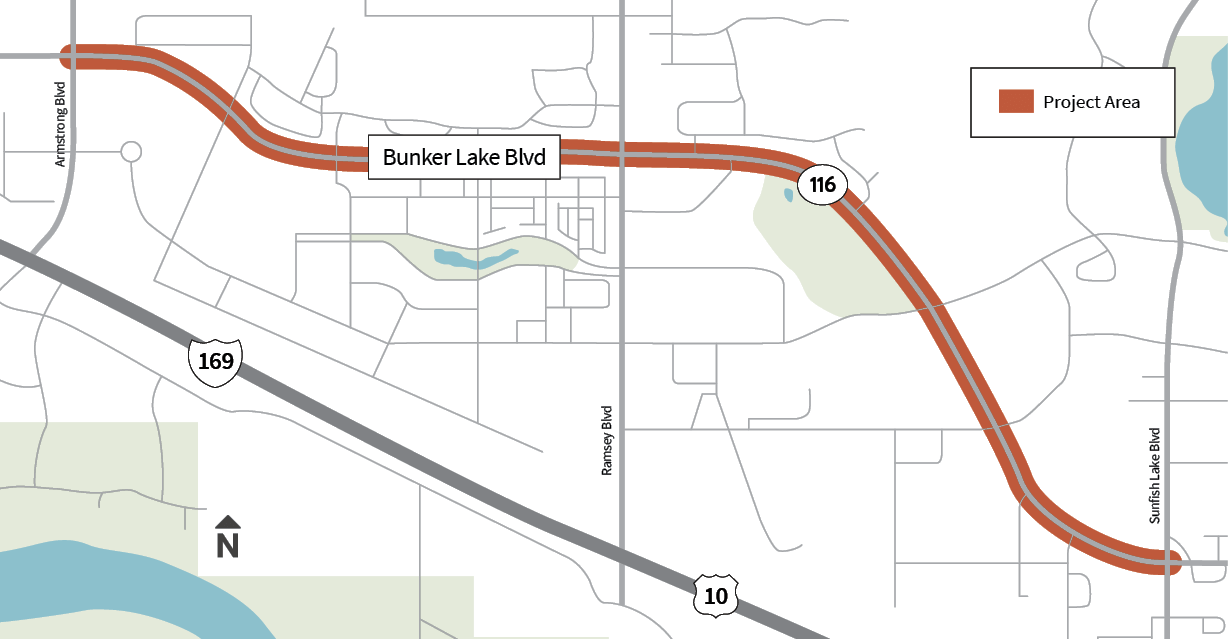 This map shows the portion of Bunker Lake Boulevard in Ramsey slated for improvements this year. (Map courtesy of Anoka County)

This map shows state and county roadwork in Anoka planned for 2021 through 2023. (Map adapted from MnDOT)

This map shows the portion of Bunker Lake Boulevard in Ramsey slated for improvements this year. (Map courtesy of Anoka County)

As the Anoka area braces for major construction on Highway 10 in 2022-2023, the state and county are tackling several projects this year to prepare nearby streets to absorb the expected influx of traffic that will be detoured around Highway 10.

Highway 10 construction in 2022-2023 includes the elimination of traffic signals at Thurston and Fairoak avenues, reconstruction of the Main Street intersection, replacement of the bridge over the Rum River and more. Learn more at anokahwy10.com and tinyurl.com/bv5zew2a.

In anticipation of that work, the following projects are slated to be completed this year, with some starting as soon as possible this spring and others beginning later in the year.

From July through October, the Minnesota Department of Transportation plans to resurface portions of Highway 169 and Highway 47. The work will require a two-week closure of the highway at the BNSF railroad tracks, tentatively scheduled for August according to Anoka engineering technician Ben Nelson, who recently reported to the Anoka City Council on upcoming projects in the area. The detour will be on Seventh Avenue.

The project stretches from the Mississippi River bridge to Clay Street and from Pleasant Street to just south of Bunker Lake Boulevard. In addition to resurfacing the highway, MnDOT will also upgrade drainage and storm sewers as well as pedestrian sidewalks and approaches.

Nelson said work on the northern portion of this project won’t begin until after the Anoka County Fair.

Anoka County is leading a project to improve the intersection at Highway 47 and Bunker Lake Boulevard.

The finished product will include dual left-turn lanes on northbound and southbound Highway 47 to help improve traffic flow and signal timing.

On westbound Bunker Lake Boulevard the right-turn lane to Highway 47 will be extended to allow more vehicles to stack in the lane. Currently only about eight cars can line up to make a right onto northbound Highway 47, according to County Engineer Joe MacPherson. The project will extend the right-turn lane several hundred feet, across the bridge east of the intersection.

Work is planned to begin in early April and be complete by this fall. Two weekend closures are expected during the project. The county will post advance notification of the closures along the route and online.

The county is also leading a project to improve Bunker Lake Boulevard in Ramsey between Armstrong Boulevard and Sunfish Lake Boulevard, where it is only two lanes.

Traffic in the corridor is estimated at 5,000-9,300 vehicles per day, and traffic volume may double during peak travel times while Highway 10 construction is underway.

MacPherson said that under normal traffic loads this section doesn’t need to be four lanes, so the county isn’t converting it to a four-lane road.

“We’re going to add some turn lanes and some additional … accommodations to help with the excess traffic,” he said.

Construction is expected to begin in late summer and be complete in the fall.

The county had been considering additional updates to Seventh Avenue but postponed any configuration changes due to time and budget constraints, according to MacPherson.

The road will remain open to traffic during construction, with temporary lane closures as needed.

Construction is expected to start this spring and be complete in early July, before traffic from Highway 47 is detoured to Seventh Avenue.

The county also plans to reconstruct the existing traffic signal at Seventh and 38th avenues under a separate contract this year.