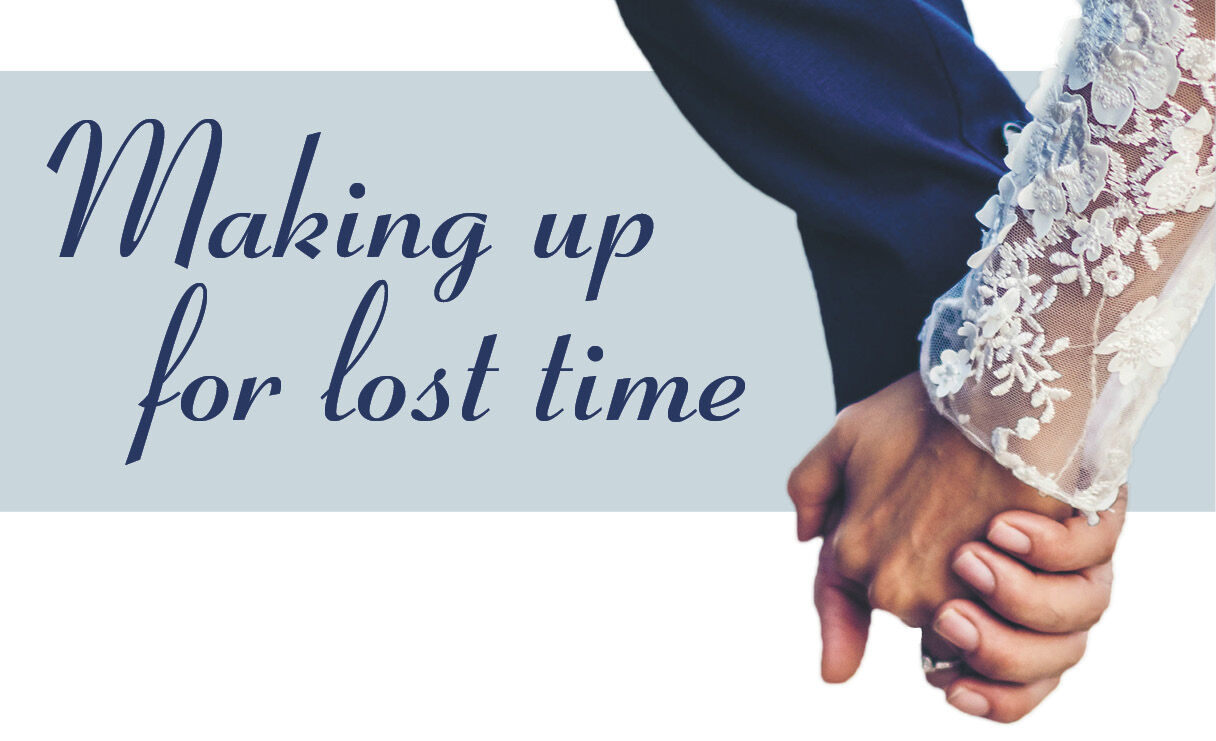 Michael Allen and his wife, Karen, didn’t intend to host a one-year wedding anniversary reception, but when the COVID-19 lockdown closed their venue last year, they had little choice.

“It was a nightmare,” Allen said of the ever-changing restrictions in early 2020.

Leading up to their big day, the couple received constant calls asking whether the wedding was happening and where it would be.

Ultimately the pair did exchange vows June 13, 2020, with the number of guests capped at 100. They had a small reception at a park in Elk River.

On June 5 this year, they’ll host a larger reception at Courtyards of Andover to preserve the deposit they made over a year ago.

A survey of more than 7,600 U.S. couples by the wedding website The Knot found that nearly half of those planning to get married between March and December last year postponed their receptions to at least 2021. Of those surveyed, 32% got legally married in 2020 but delayed the reception, and 15% postponed the wedding altogether.

Now with vaccines rolling out and pandemic restrictions lifting, the wedding industry is roaring back, and local venues and vendors are booking up fast, as couples reschedule celebrations they postponed.

“I’m getting calls like crazy,” Coon Rapids-based DJ Scott Rousseau said. “The calendar is filling up. ... We are all busy because you’re getting two years’ worth of weddings booked into one.”

Rousseau estimates his business at Weddings With Scott was down 80% last year. Most weddings on his schedule were postponed.

As a sole proprietor who owns his equipment and operates with little overhead, Rousseau weathered the storm, but he said a lot of full-time DJs weren’t so lucky and went out of business. He suspects that’s another reason he’s getting so many calls this year.

The high volume of weddings could end up affecting the prices couples pay. Rousseau said many DJs and other wedding professionals won’t need to offer discounts to attract customers.

“People are going to be paying a premium this year because time and spacing are limited,” he said.

Couples are also being less picky about when they schedule their celebrations.

In a typical year, wedding and event specialist Amanda Twait, of Unique Dining Catering at the Courtyards of Andover, sees the most weddings between May and October, and they’re almost always on Saturdays. This year, to accommodate people who pushed back their big day in 2020, she has weddings scheduled on Thursdays, Fridays, Sundays — and even one Monday.

“People are definitely more flexible on dates,” she said.

A trend Twait noticed was that a lot of couples did get married last year, on a much smaller scale, but decided to host a larger reception this year — either as an anniversary celebration or just to celebrate with loved ones.

Styled Stems floral shop and boutique in Blaine has also experienced a dramatic increase in wedding business this year. Leah Schmidt, who co-owns the shop with her mother, Sheri Mallon, said she went from 10 bookings in 2020 to nearly 60 as of early May this year.

To accommodate smaller weddings under COVID-19 restrictions, Styled Stems offered a “petite package” last year, as well as a split-order option, where the shop would provide floral arrangements for the wedding ceremony in 2020 and the reception in 2021. Nevertheless, two-thirds of the shop’s original 30 bookings last year were canceled or postponed.

As business bounces back this year, it’s outpacing a typical year for Schmidt.

Before opening her Blaine storefront last September, Schmidt worked a side job as a home-based florist for 20 years. Pre-pandemic she normally had 40 wedding bookings a year. Although the new storefront may be contributing to the 2021 increase, she said the change is mostly due to couples who delayed their weddings or receptions.

Although more brides and grooms are comfortable moving forward with wedding plans this year, many of them are operating with a compressed timeline, and some are still being cautious.

Rousseau said one couple booked him in late April as the DJ for a July 10 wedding, which he called “unheard of” in his industry.

Despite the influx of business, his September and October schedules were more open than usual, but he expects them to fill up.

“It’s kind of a mad rush, and people are kind of scrambling,” he said.

But some couples are being extra cautious.

Sarah Filipi, of Blaine-based Sarah Grace Photography, said she’s talked with several couples who are scheduling as many as three years out so they won’t need to worry about any restrictions. Even though the state is lifting virtually all pandemic restrictions in May, Filipi said it’s hard to plan too far ahead because no one can predict what will happen next.

Dan Adler, director of the nonprofit-owned Heart of the City Music Factory in Anoka, echoed that thought.

His small venue primarily hosts concerts, but it’s also available for weddings and other events. With a capacity of 137 people under normal circumstances, it was hit harder by capacity restrictions than large venues that could still accommodate hundreds of guests.

“What I think we’ve seen consistently is there’s been a lot of hesitancy,” he said May 13.

With the announcement that Gov. Tim Walz is lifting most pandemic restrictions by the end of the month, some of that hesitancy may evaporate. Adler was thrilled by the announcement but “almost afraid to hope,” because it’s impossible to predict whether things will take another turn for the worse. But he’s going to take advantage of the reprieve.

All capacity limits on indoor venues will be lifted May 28. For a large segment of the population, that alone is reason to celebrate.