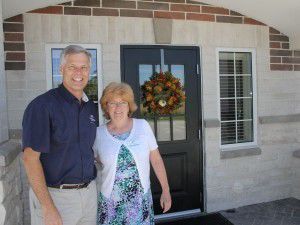 Dan and Ginger Anderson recently opened the first Christian Brothers Automotive franchise location in Minnesota in Andover, which they have called home since 1991. Photos by Eric Hagen 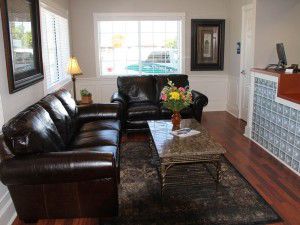 The exterior and interior of Christian Brothers Automotive are designed to make the business feel more like a home than an auto garage, according to owners Dan and Ginger Anderson.

Dan and Ginger Anderson recently opened the first Christian Brothers Automotive franchise location in Minnesota in Andover, which they have called home since 1991. Photos by Eric Hagen

The exterior and interior of Christian Brothers Automotive are designed to make the business feel more like a home than an auto garage, according to owners Dan and Ginger Anderson.

An Andover couple celebrated their 37th wedding anniversary the day after they opened Christian Brothers Automotive in the town they have called home for 22 years.

When Dan Anderson saw that this Houston, Texas-based company’s core values are to “love your neighbor as yourself,” which is from Matthew 22:39, he became intrigued with giving the vehicle service business another try because he loves being around cars. He owns a 1969 Jaguar XKE Roadster, once owned a garage in downtown Anoka in the early 1980s and for a while was known as “Tuxedo Dan” because he would wear a tuxedo while driving in demolition derbies in the late 1970s.

The Andersons can see why this company has been able to build service shops in 13 states. Andover will be the first Minnesota location for Christian Brothers Automotive and 114th in the United States, Dan said.

It goes beyond the oil changes, tire rotations and serving an engine, the Andersons pointed out.

“We want it to be more like home than a garage,” Dan said.

The main entrance looks like the entrance to a home with the way the exterior is designed and a wreath hanging on the door. The inside has comfortable leather furniture, wood flooring, a rug and a coffee and end tables. There are no tires in sight.

One notable difference on which some customers have already commented positively is that there is no blaring television, they said.

Ginger said the waiting room is a quiet environment where customers can read, surf the Internet or they could be shuttled home or to work.

The compressor is in a separate building so customers will not hear it, according to Dan.

According to the Andersons, Christian Brothers Automotive have been extremely helpful in setting up the business and will continue to stay involved. They bought everything from the couches to the equipment.

Christian Auto Brothers has the capability of doing high level computer diagnostics on vehicles. If a mechanic has a question, they can turn to an online forum of 450 other Christian Brothers Automotive mechanics.

Christian Auto Brothers currently has a service manager and two service technicians, but the Andersons plan to hire at least two more mechanics. There are nine service bay doors. The business does not do any body work on heavily damaged vehicles.

It offers service and parts warranties that benefit the customer even more than a standard vehicle warranty. A two-year, 24,000-mile warranty typically means the warranty runs out when one of those numbers are met. Under Christian Auto Brothers’ policy, whatever benefits the customer the most is how long a similar warranty would last.

Christian Brothers Automotive is located at 1716 Bunker Lake Blvd. NW in Andover, next to Kwik Trip.

Business hours are 7 a.m. to 6 p.m. Mondays through Fridays and 8 a.m. to 2 p.m. Saturdays. The business is closed on Sundays.

Eric Hagen is at eric.hagen@ecm-inc.com