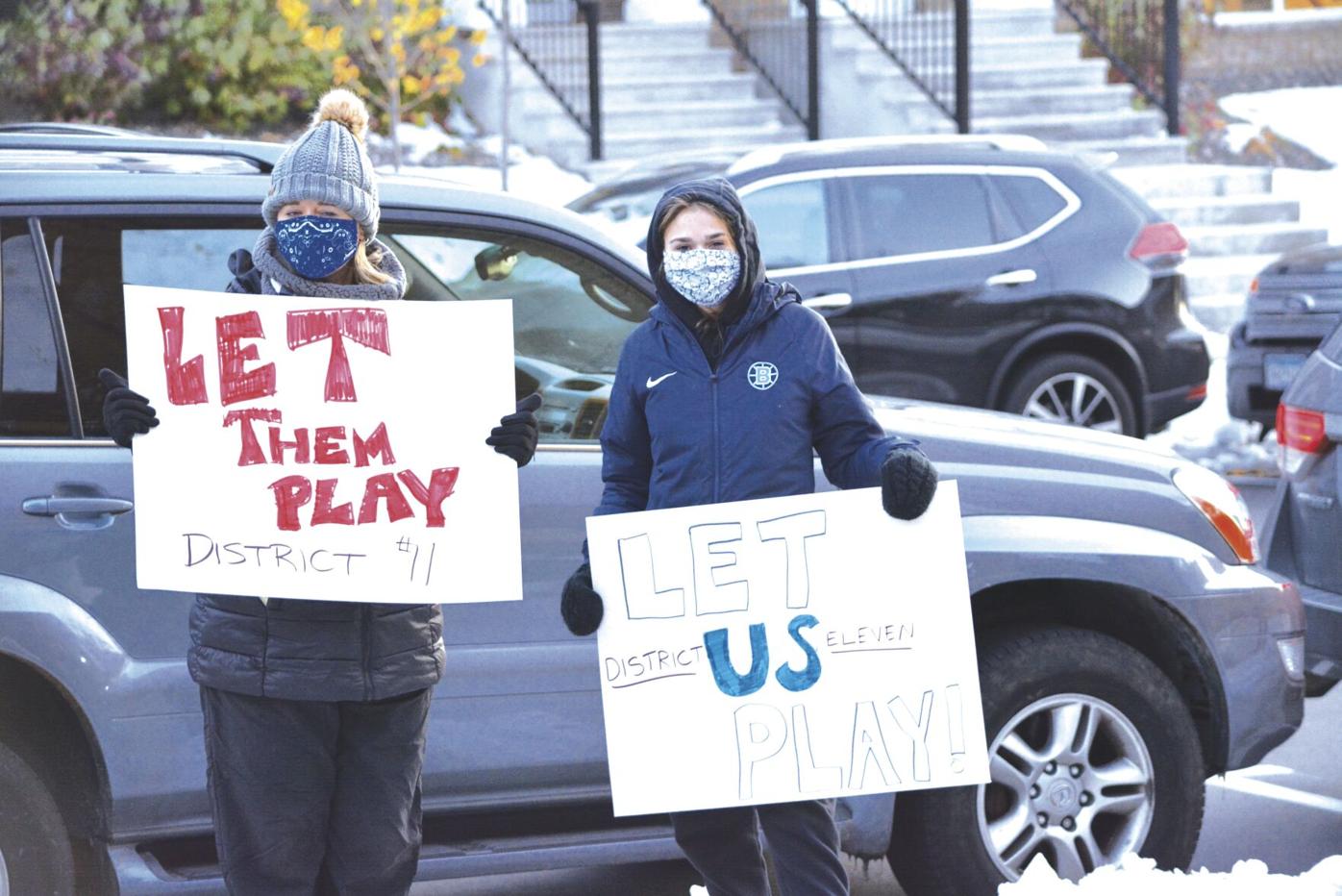 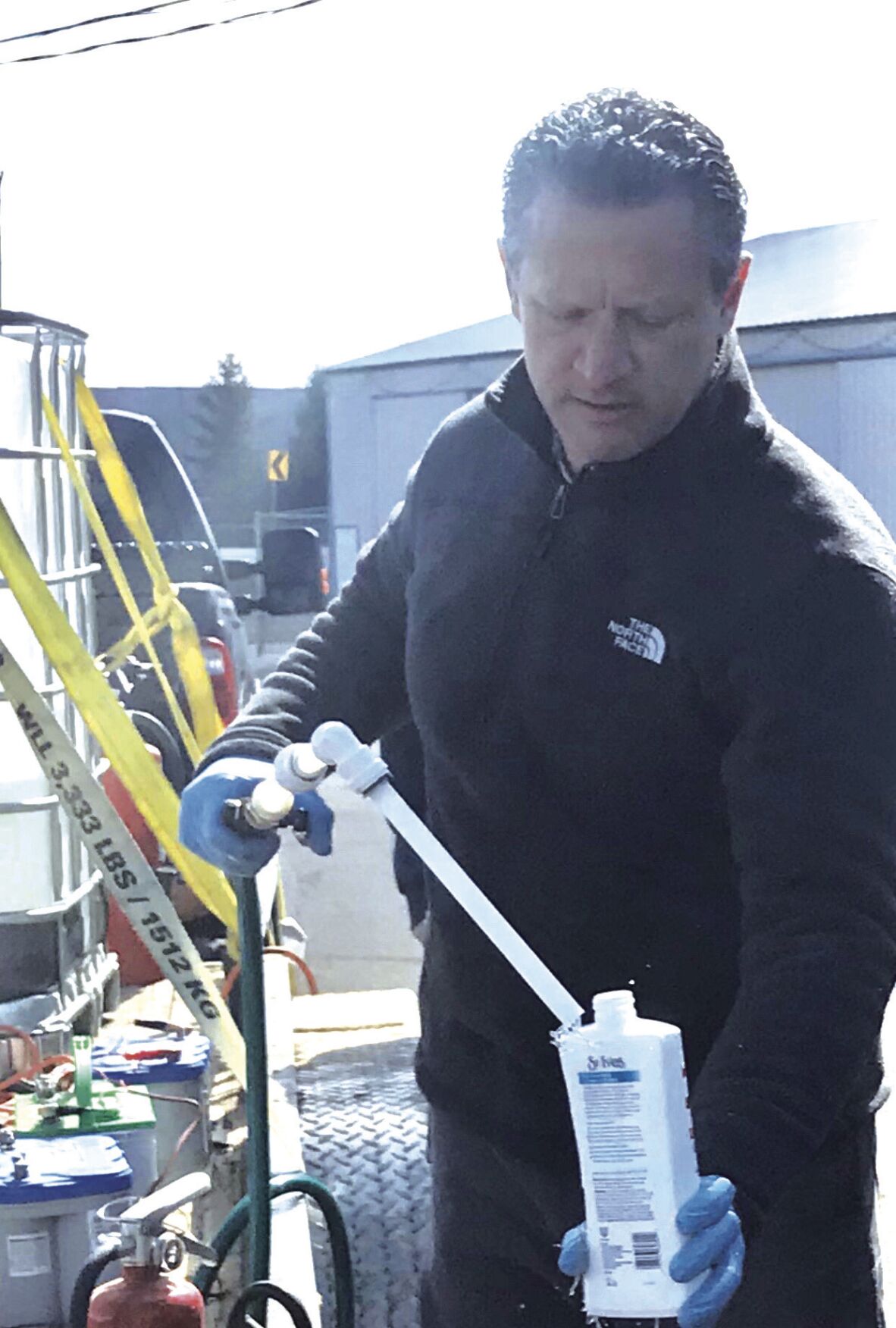 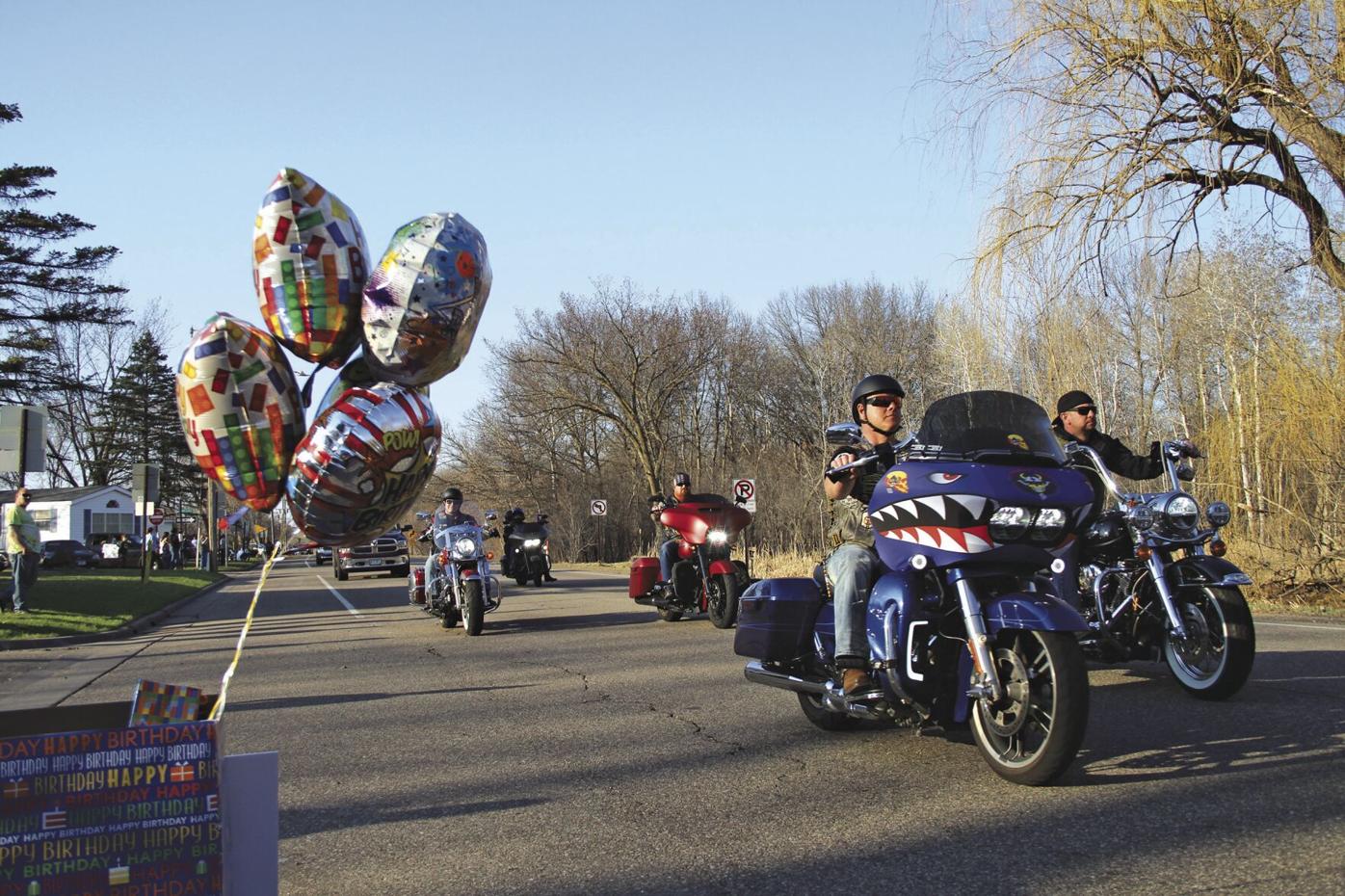 Bikers ride in 11-year-old Gavin DeMent’s birthday parade April 7 in Blaine. The parade was organized after Gavin’s party was canceled due to the COVID-19 pandemic. (hoto by Paige Kieffer) 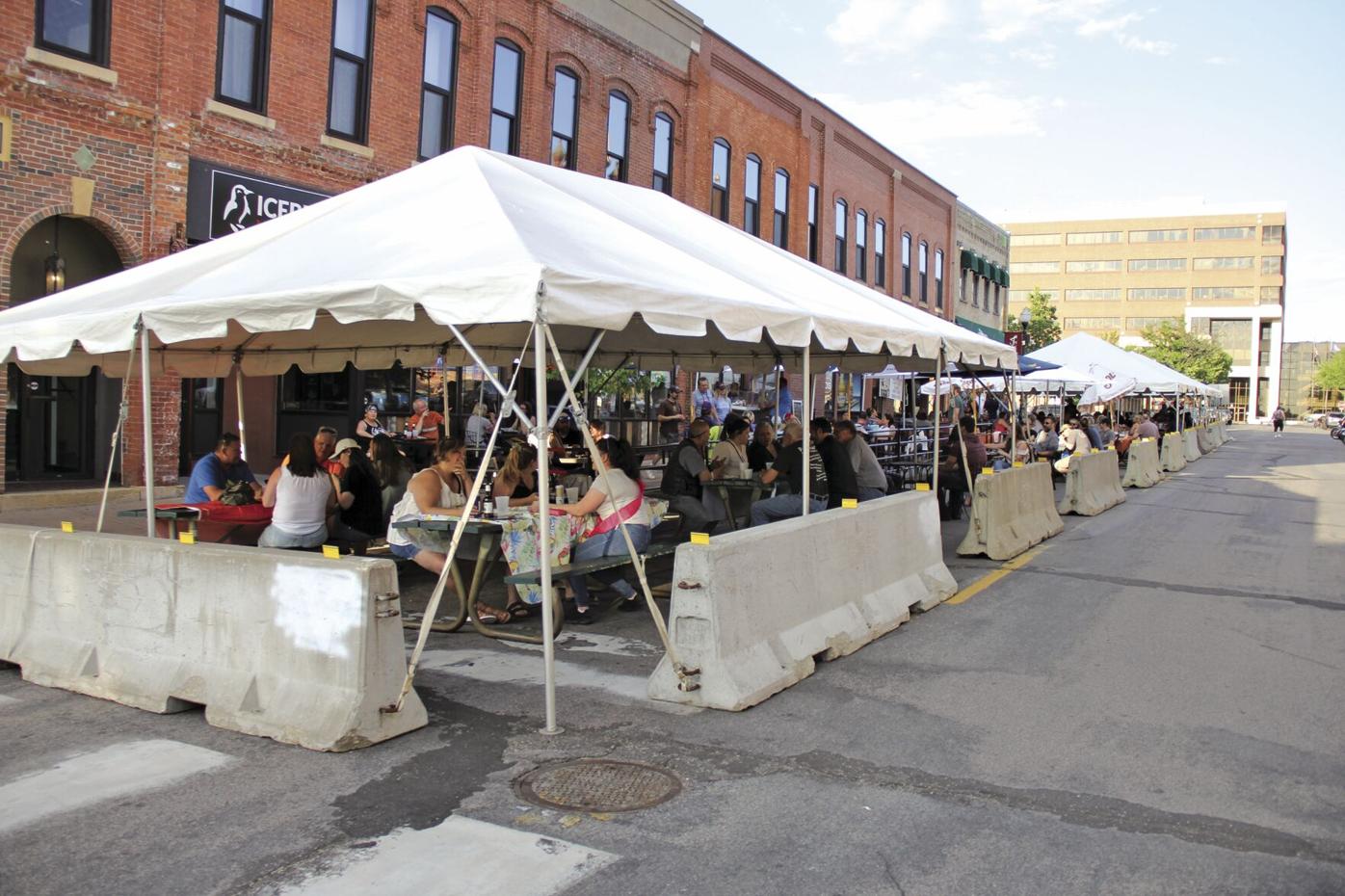 Patrons take advantage of the beautiful weather Friday, June 5, 2020, to dine outdoors on Jackson Street in downtown Anoka. The city closed half the street to allow more room for outdoor dining. (Photo by Jonathan Young) 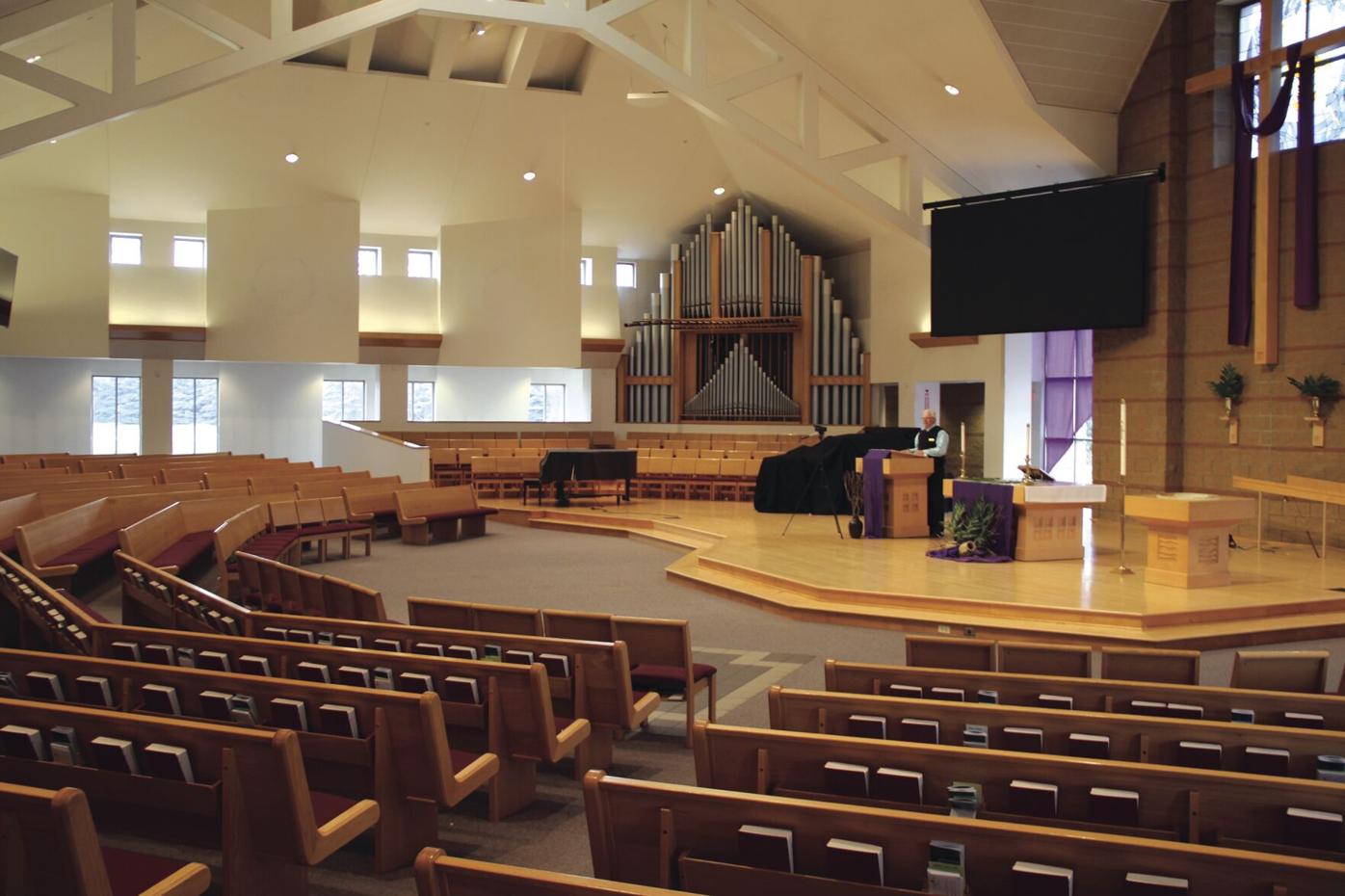 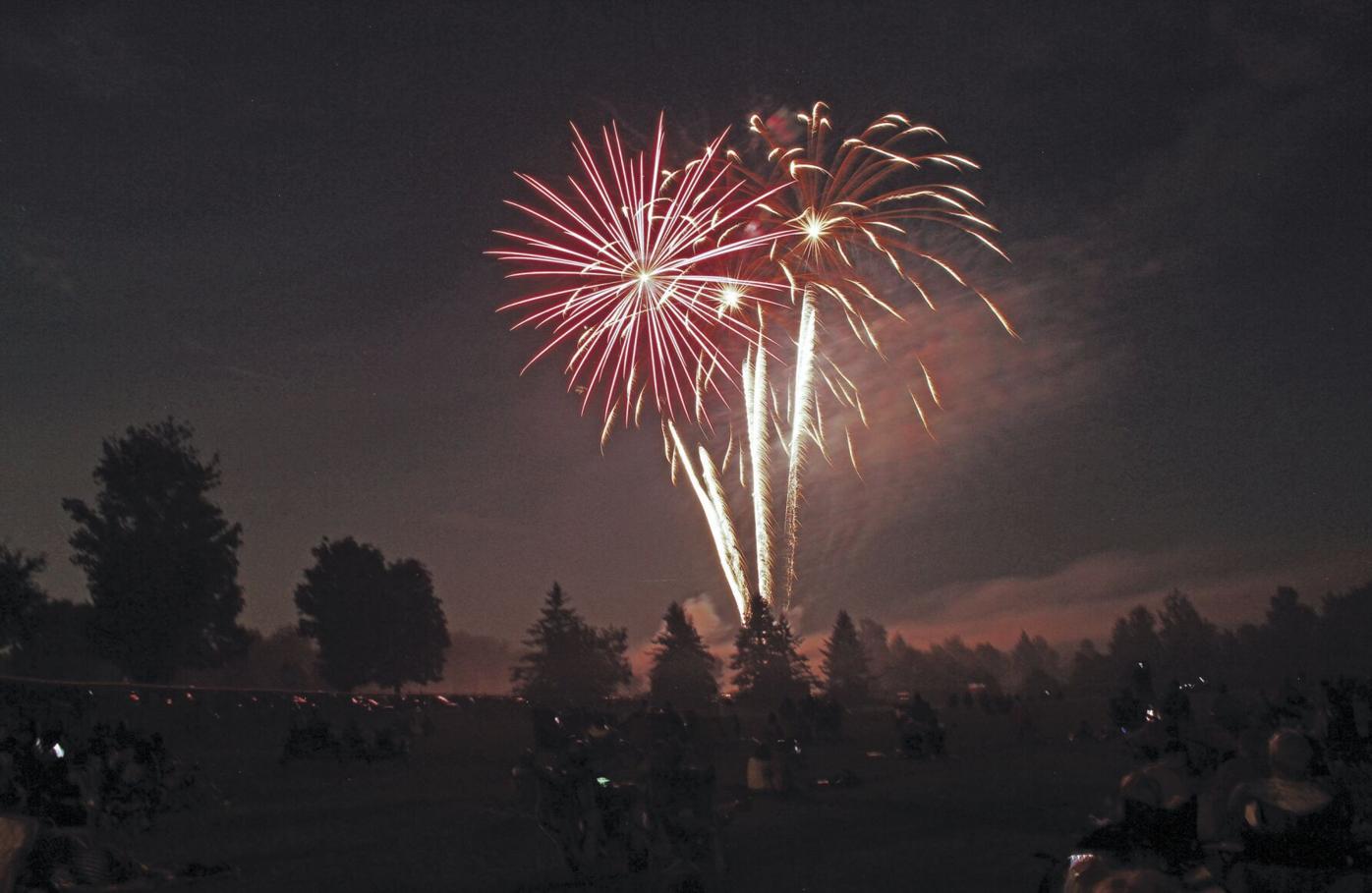 Ham Lake’s fireworks were one of the few large community events to take place in Anoka County over the summer. (Photo by Paige Kieffer)

The year 2020 was dominated by the COVID-19 pandemic and its effects. Following is a review of some of the impacts of the novel coronavirus in Anoka County and how communities dealt with it. (Note: Find our general year in review stories here.)

Throughout 2020 area residents organized to help provide needed supplies and relief to neighbors during the pandemic.

In March the country was suffering from a lack of basic personal protective equipment and hand sanitizer.

Dan Baker, who owns Baker White Inc., realized he could help meet the demand by manufacturing hand sanitizer. The two organized a distribution to give away more than 400 gallons of sanitizer. While donations weren’t sought by volunteers, people gave roughly $4,000.

The money was initially going to be used for a second round of distribution, but supply chains caught up, and the sanitizer wasn’t needed. In October Look donated the money to the Family to Family Program.

In mid-April the business saw its sales decline due to the pandemic and decided that creating the masks would help keep the lights on and assist in fighting the coronavirus. Upscale Designs purchased 3-D printers to build brackets for the reusable face shields.

When shutdowns rolled out throughout the country many businesses began to suffer. Performers in particular found themselves without venues or gigs to play.

In March Quad Cities Television partnered with the 30-Days Foundation to air The Relief Sessions.

To cheer up isolated and lonely residents, some residents hosted parades for socially distanced fun. In Blaine, residents of the Savanna Grove and Legacy Creek neighborhoods paraded in costume during a few weekends in the spring.

Other parades celebrated birthdays for people like 11-year-old Gavin DeMent in Blaine and 100-year-old Lauraine Blaska in Anoka.

Many businesses faced unprecedented challenges in 2020 due to the COVID-19 pandemic, as restrictions aimed at slowing the spread of the novel coronavirus limited business capacities or shut them down entirely.

Bars and restaurants were ordered to close at 5 p.m. on St. Patrick’s Day except for take-out. Little did they know they wouldn’t reopen for dining service until June 1 and then only at half capacity.

Other businesses not deemed essential also faced shutdowns this spring as Gov. Tim Walz and state health officials sought to contain the spread of COVID-19.

In November, bars, restaurants and a handful of other businesses, such as gyms, were required to close their doors again as cases and deaths surged in the state. Bars and restaurants are still not allowed to provide indoor dining until at least Jan. 10.

Some local businesses have challenged the governor’s restrictions. In late May two Anoka County businesses and Rep. Cal Bahr, R-East Bethel, were part of a group that sued Walz, alleging his COVID-19 executive orders were both unlawful and unconstitutional. In September a Ramsey County judge dismissed the suit, saying the plaintiffs’ arguments lacked merit. Recently Cork, a restaurant in Anoka, reopened in defiance of the governor’s orders and now faces a lawsuit from the Attorney General’s Office.

While many businesses struggled, some local companies were able to provide much-needed goods and services. Chandler Industries, for example, ramped up production of ventilator parts at its Bethel plant to help fill the need for equipment in hospitals across the country. And some industries — such as liquor stores, which were able to remain open — have done well this year despite the pandemic.

Hundreds of local businesses took advantage of the federal Paycheck Protection Program, which offered forgivable loans to qualifying companies as an incentive to keep employees on the payroll. Six Anoka County companies received loans of at least $5 million, according to data released by the U.S. Small Business Administration.

The pandemic forced many communities to rethink their annual festivals and celebrations.

Some were outright canceled, including the Game Fair, Coon Rapids’ Fourth of July, Anoka Riverfest, the Blaine Festival and more.

Other events were held despite the pandemic. Some modified the events, or encouraged social distancing.

In Ham Lake, the annual Fourth of July celebration was hosted as usual, with some attendees attempting to social distance and wear masks.

Other events changed drastically, such as Ramsey’s Happy Days. This year even the name was changed to Happy Daze.

The event was hosted on a smaller scale. Attendees were encouraged to socially distance during some arts events. The city intended to host a drive-in movie, but it was canceled due to rain.

As the year dragged on and the weather turned cold, many holiday plans were disrupted. Families were encouraged to avoid large, in-person gatherings.

Some organizations attempted to make up the difference. The Coon Rapids VFW Auxiliary and senior center partnered to host a drive-through turkey dinner for seniors.

Others organized Santa parades, or invited Santa into their neighborhoods for socially distanced photos.

People of faith in Anoka County found ways to adapt to a pandemic in 2020, from drive-up confession to livestreaming services.

For Christians, Easter fell on April 12, while Minnesota was still in its initial lockdown. That meant in-person services weren’t allowed on what is typically one of the busiest holidays of the year for many congregations.

Many churches coped by hosting virtual services online, and some programs met via Zoom.

“It’s a frightening new reality that we can kill each other just by sharing the same air and touching the same at things, while at the same time it’s a unique experience where all of humanity is going through this together,” Father James Livingston of the Church of St. Paul in Ham Lake said in April. “This pandemic is unifying even though it separates us physically.”

Churches found other creative ways to support members. The church of St. Paul had drive-up confession, and the Church of St. Katherine Drexel in Ramsey hosted an Easter blessing in its parking lot. Faith Lutheran in Coon Rapids formed a group of “Care Callers” who volunteered to call members of the church to check on them and make sure they had enough food and supplies.

People of other faiths faced challenges as well.

Muslims who attend the mosque in Blaine celebrated Ramadan remotely last spring, tuning in to daily spiritual reflections online instead of gathering for traditional iftar dinners. In July the mosque hosted outdoor prayers for its holiday Eid al-Adha. The mosque also increased the frequency of distributions at its food shelf as demand grew early in the pandemic.

As the year wore on and guidelines from the governor changed, congregations varied in how and when they returned to in-person worship, and some still offer online viewing options.

The coronavirus pandemic rocked education in 2020, from shutdowns in the spring to virtual graduations and debates around varying education models.

In the spring, schools closed to in-person learning and scrambled to get the technology needed to finish the school year at a distance.

Graduation ceremonies could not be held in person, despite proposals by school districts to hold them on football fields and spread out attendees. Instead, the ceremonies were broadcast online.

On Aug. 24 teachers rallied outside the Sandburg Education Center to demand a greater voice in discussions about how to return to school. The rally was held immediately before the School Board voted to return to school in a hybrid model.

On Oct. 26 the district saw another protest outside the Sandburg Education Center as parents called on the district to allow students to play sports. During a meeting immediately following the protest, board members voted to allow sports and activities to continue until further clarification was received from the state.

Once the school year began, districts around the county worked to figure out distance and hybrid learning models. Most started in hybrid education, with students alternating which days they were in class in-person, versus online.

The state laid out guidance for when a district could teach students in person or at a distance. That guidance was geared toward keeping younger students learning in person longer.

However, in November the number of new COVID-19 cases spiked, and area districts ultimately moved all grade levels to distance learning.