The suit, filed May 28 in Ramsey County, claims not only that the governor’s emergency orders are unlawful but that the state statute authorizing peacetime emergency declarations is itself unconstitutional. The lawsuit asks the court to prevent the governor from enforcing existing COVID-19 orders and bar him from using emergency powers to issue new orders.

In a June 18 filing the Attorney General’s Office argued that the plaintiffs don’t have standing to sue and that their arguments lack merit.

Plaintiffs include Title Boxing in Coon Rapids and Yoga By Blisstopia in Blaine, as well as the four-member New House Republicans Caucus, which includes Rep. Cal Bahr, R-East Bethel. The Free Minnesota Small Business Coalition and several other businesses are also named.

The lawsuit was filed by attorney Erick Kaardal, who is known for challenging government entities in court.

The lawsuit’s first argument claims Walz’s executive orders violate the constitutional separation of powers because the Legislature can’t delegate purely legislative authority to the governor. But that’s not what’s happening here, according a June 18 memo filed by Ellison’s office.

“It is well established that the legislature can enact statutes which provide flexibility for the executive branch officials to implement,” the memo says.

The plaintiffs’ second argument claims the peacetime emergency statute contains a “legislative veto” provision not authorized by the Minnesota Constitution. This refers to the Legislature’s ability to end a peacetime emergency lasting more than 30 days by a majority vote of each house. The plaintiffs’ argument draws a parallel to a 1983 federal case in which the Supreme Court ruled a legislative veto unconstitutional.

Ellison’s office rejected that comparison, saying the federal case involved a “one-House veto,” where one house of Congress was given authority that should have belonged only to Congress as a whole.

The lawsuit’s third argument claims that even if the state’s emergency declaration law is constitutional, it doesn’t allow the governor to declare a peacetime emergency for a public health crisis. Although the law allows an emergency declaration for an “act of nature,” plaintiffs say that refers to “catastrophic one-time occurrences like an earthquake, flood or tornado” and can’t apply to a pandemic.

The Attorney General’s Office countered that reading the rest of the statute makes it obvious that “act of nature” can include a pandemic and that the legislative history behind the law supports this reading as well.

Ellison’s office also noted that a Stearns County court ruled that Walz properly exercised his authority under state statute in declaring an emergency due to COVID-19. 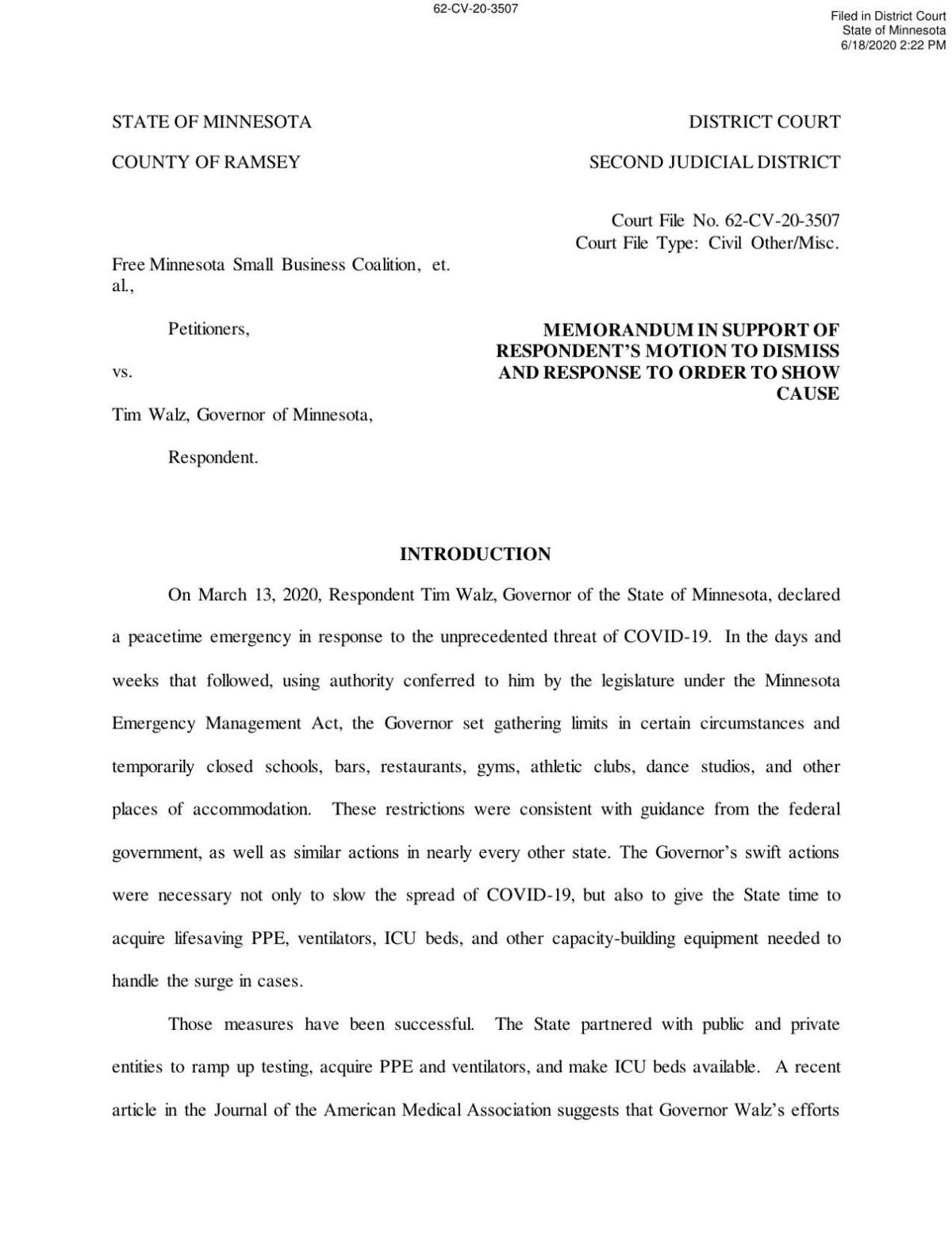