An East Bethel legislator and two Anoka County businesses are among those suing Gov. Tim Walz over his executive orders related to the COVID-19 pandemic.

The lawsuit, filed May 28 in Ramsey County Court, claims recent executive orders limiting citizen movement and business operations were unconstitutional. A hearing on the merits has been set for Thursday, July 16, before Judge Thomas Gilligan in Ramsey County. The judge has also ordered Walz to answer key arguments in the case by Thursday, June 18.

In the suit attorney Erick Kaardal, known for challenging government entities in court, argues on behalf of the plaintiffs that Walz violated their rights and the rights of 5.6 million Minnesotans.

“From my vantage point we’re living through a constitutional clown show where the one branch, the executive branch, is taking all the power,” Kaardal said. “And that wasn’t the way it’s supposed to be, and it’s in violation of the Constitution.”

Plaintiffs include Title Boxing in Coon Rapids and Yoga By Blisstopia in Blaine, as well as the four-member New House Republicans Caucus, which includes Rep. Cal Bahr, R-East Bethel. The Free Minnesota Small Business Coalition and several other businesses are also named.

“Governor Tim Walz’s suspension of our constitutional rights should alarm every Minnesotan,” Bahr said in a statement. “Constitutional rights are not conditional permissions handed down to the people by government officials. No individual, including Governor Walz, is allowed to suspend our God-given rights.”

The lawsuit asks the court to prevent the governor from enforcing existing COVID-19 orders and bar him from using emergency powers to issue new orders.

The suit outlines three arguments, including a claim that the Minnesota law authorizing peacetime emergency declarations is itself unconstitutional.

In the first argument the plaintiffs say Walz’s orders are unconstitutional because the Legislature cannot delegate its authority to make laws and because the Legislature failed to provide for judicial oversight. At the end of May the Minnesota Court of Appeals ruled the governor’s emergency orders weren’t subject to review by the court, because such review isn’t provided for in statute.

The lawsuit’s second argument claims the statute allowing the governor to declare peacetime emergencies violates the constitution by including a “legislative veto” provision. Under the law in question, the Legislature can end a peacetime state of emergency lasting more than 30 days by a majority vote of each house. According to the lawsuit, the Minnesota Constitution doesn’t provide for such a mechanism.

The third argument claims that even if the law is constitutional, it doesn’t allow the governor to declare a peacetime emergency for a public health crisis. When invoking emergency powers, Walz classified the COVID-19 pandemic an “act of nature,” which is a valid reason to declare an emergency under Minnesota Statute 12.31. The plaintiffs say that’s a stretch and argue that an “act of nature” is limited to “catastrophic one-time occurrences like an earthquake, flood or tornado.”

All this could be moot if Walz doesn’t extend the state of emergency through the date of the July 16 hearing. Although plaintiffs sought expedited review, the Minnesota Attorney General’s Office asked for more time, and the court granted it.

But Kaardal expects the governor will continue to extend the state of emergency and that these “very solid” constitutional claims will have their day in court.

“It’s the most important constitutional case in a generation if the case doesn’t become moot,” Kaardal said.

“If our lawsuit prevails, all of the peacetime emergency orders will be nullified and the balance of power between the executive, legislative and judicial branches in state government will be restored,” Dan McGrath, spokesperson for the Free Minnesota Coalition, said in a statement.

The Attorney General’s Office and Governor’s Office did not return requests for comment before deadline.

A GoFundMe campaign to raise money for the lawsuit had brought in $20,445 as of June 8, beating its $20,000 goal. The campaign is available at gofundme.com/f/StopWalz. 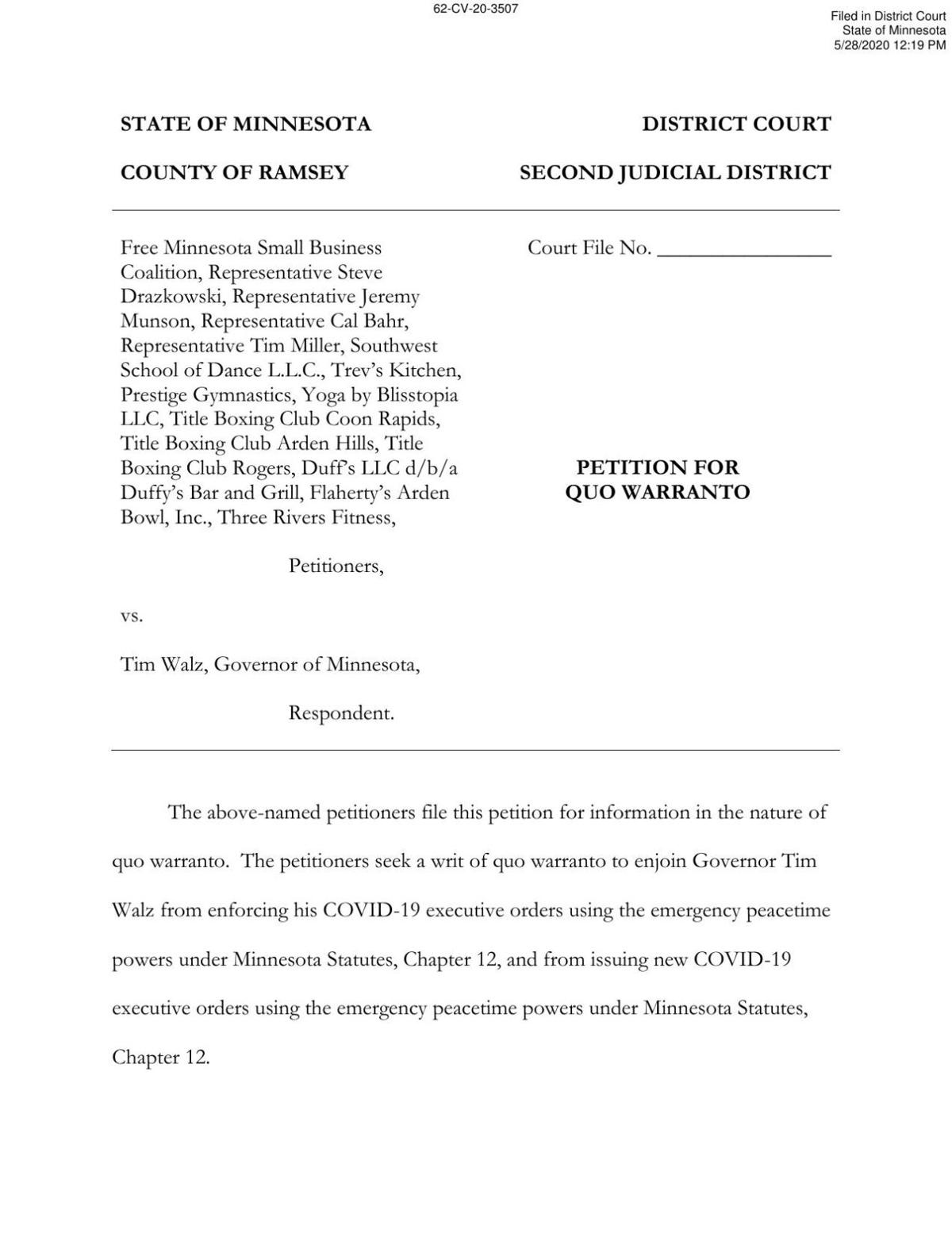 “Governor Tim Walz’s suspension of our constitutional rights should alarm every Minnesotan,” Bahr said in a statement. “Constitutional rights are not conditional permissions handed down to the people by government officials. No individual, including Governor Walz, is allowed to suspend our God-given rights.”

The ignorance of this statement shows plainly that Mr. Bahr has a fundamental misunderstanding of the constitution... and logic, apparently.

By definition, one's constitutional rights are granted by.... the Constitution. The man-made foundation of our government. Not God.

And, like it or not, as they say in the good book: he who giveth...

Now, if only his constituents would realize that they're voting for an incompetent, as required if we have any hope at restoring a functional democracy...