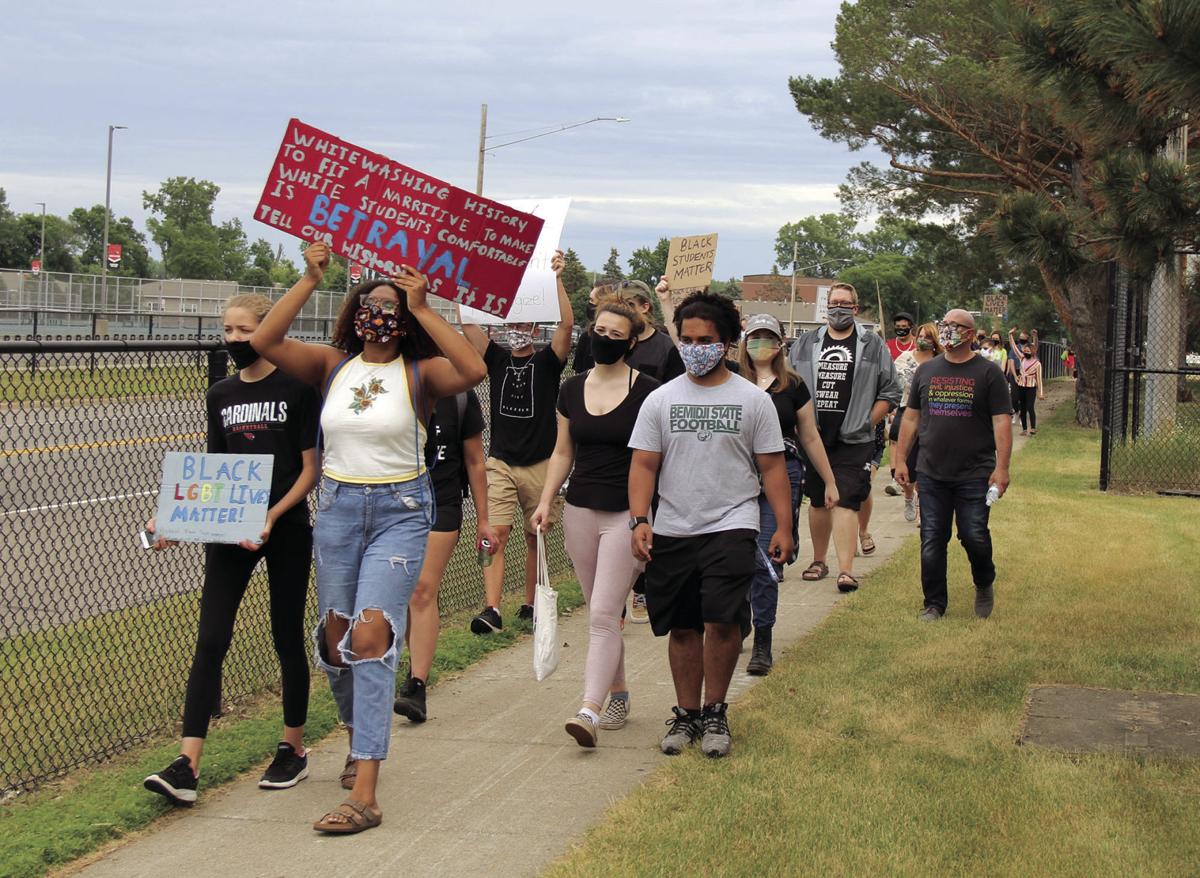 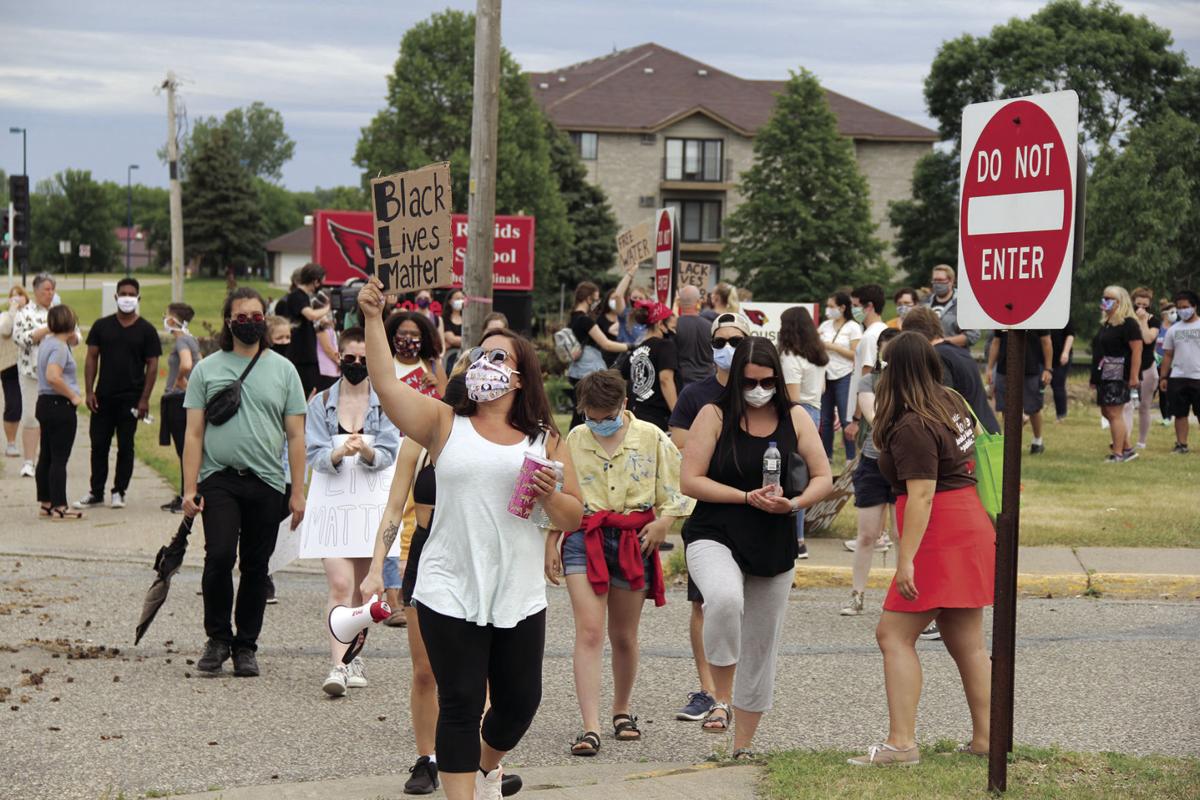 The group, which included many current and former students, gathered near the school before walking along Northdale Boulevard to Riverwind Park chanting phrases such as “Black lives, they matter here.”

According to protest organizer Jess Burggraf, a 2011 Coon Rapids graduate, the school district has “failed to adequately address culture and discrimination issues” and is “not holding their students to a high standard” regarding racist speech and actions.

Burggraf organized the protest after a 2015 controversy resurfaced on social media in the wake of George Floyd’s death in police custody. A Black former student named Samiira posted on Twitter that in 2015 administrators forced her to apologize to the whole school for saying “Black Lives Matter” while reading school announcements. She wrote that she was 16 and will never forget being made to apologize “for saying my life matters.”

After seeing the controversy online, Burggraf said she reached out to district administrators to see if their thoughts on the situation had changed.

“Basically they said they wouldn’t apologize, that the actions they would take today would be the same as five years ago, which was especially concerning to me that they hadn’t learned in anything in five years,” Burggraf said.

But she believes the problem isn’t limited to Coon Rapids High School. Burggraf, who is white, said she’s spoken with a variety of former students and staff members who agree racism is a problem in the district. In organizing the protest, she hoped “to create an avenue for the people most directly involved that feel intimidated,” and she asked people to share their stories if they’ve encountered racism in Anoka-Hennepin schools.

Prior to the protest, Burggraf and her co-organizers made a list of six calls to action for the school district to take. The list includes firing Coon Rapids High School Principal Annette Ziegler, revising the district’s respectful learning environment and student discipline policies, creating a policy to keep elective multicultural courses in the curriculum, and more. The full list is available on the event’s Facebook page at tinyurl.com/y9aesu8t.

Not all protesters agreed with every request. Burggraf said she welcomes other voices and ideas but said the problem has reached a point where “something needs to happen.”

The school district says it does support its students of color and is continually working to improve.

Associate Superintendent Timothy Gadson said that during the three years he’s been Ziegler’s supervisor, there have been no allegations of racism or discrimination against her.

“And we take that very seriously, but there has not been any claims to my office,” he said.

The district disputes some of the claims circulating on social media regarding the 2015 incident but says student privacy laws limit what it can say publicly.

In a June 5 statement on the district website, Superintendent David Law wrote that in December 2015 a student who frequently read school announcements did so wearing a Black Lives Matter T-shirt and made a statement regarding her support for Black Lives Matter.

According to Law, the administration asked the student to “clarify during the next day’s announcements that her personal statements were not appropriate during a school announcement,” but that sparked concerns that the school didn’t support Black Lives Matter. Ultimately the student and her parents agreed to “a joint message from the principal and student explaining the free speech limitations placed on school announcements, but not limiting any student’s rights to free speech in general at school,” Law wrote.

“We would go on the record to say that Black lives matter, and that’s a fact,” he said.

Gadson said what the district has responded to is the politicization of #BlackLivesMatter.

He also said the district has reached out to the student involved in the 2015 incident.

“We still want to support her,” he said. “We still want to listen to her. We know that this is a journey, that we have a lot of work to do, but we want to do that work. But we need collaboration. ... We would really like to hear from the student.”

The district says it already plans to review some of the policies mentioned in the protesters’ demands.

According to Jennifer Cherry, director of student services, Anoka-Hennepin adopted an equity achievement plan last year after two years of data collection, and the action items include review of the respectful learning environment and student discipline policies.

Although the protest was a one-time event, Burggraf hopes to keep those who attended engaged and pushing for change. A private Facebook group has been created “for parents, staff, community members, and students dedicated to equity” in the district. It’s available at tinyurl.com/y8w7ahd9.

Since the protest, Samiira, the student involved in the 2015 incident, has created a petition on change.org telling her story and offering a list of demands, including new and diverse leadership at the school, more education about the history of race in America, creation of an equity team to address reports of discrimination, and more. The petition is available at tinyurl.com/y9d9tjwh.