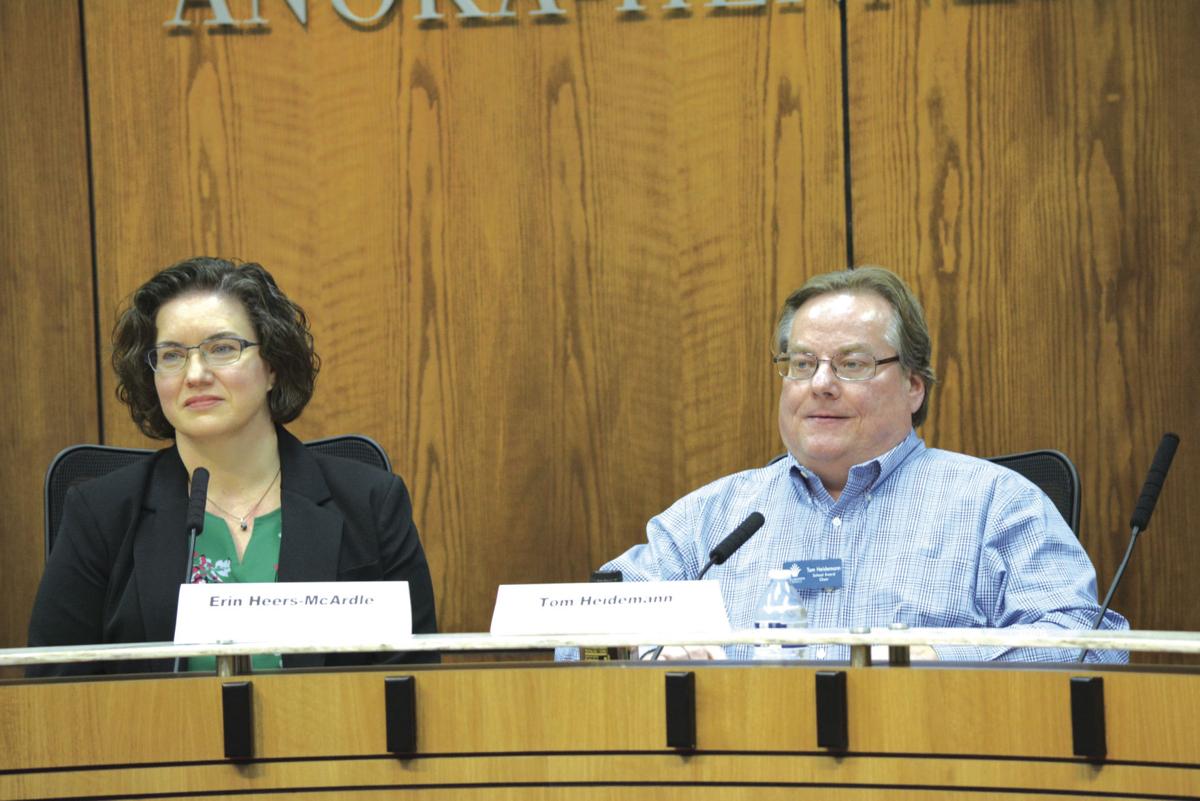 Erin Heers-McArdle, left, and Tom Heidemann are the two candidates for the Anoka-Hennepin School Board District 1 seat. They answered voter questions during an Oct. 2 forum in Anoka hosted by the League of Women Voters. (Photo by Connor Cummiskey) 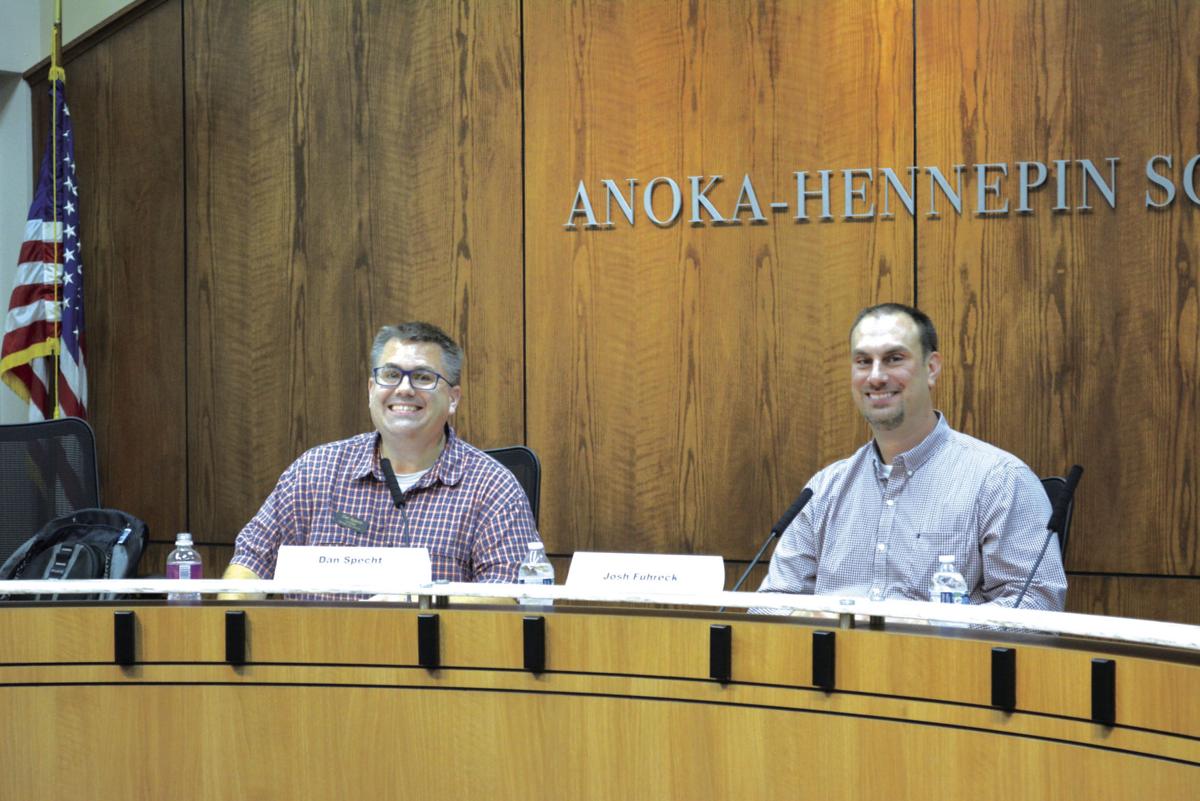 Dan Specht, left, and Josh Fuhreck are competing for the Ramsey Ward 3 special election. They answered voter questions during an Oct. 2 forum hosted by the League of Women Voters in Anoka. (Photo by Connor Cummiskey)

Erin Heers-McArdle, left, and Tom Heidemann are the two candidates for the Anoka-Hennepin School Board District 1 seat. They answered voter questions during an Oct. 2 forum in Anoka hosted by the League of Women Voters. (Photo by Connor Cummiskey)

Dan Specht, left, and Josh Fuhreck are competing for the Ramsey Ward 3 special election. They answered voter questions during an Oct. 2 forum hosted by the League of Women Voters in Anoka. (Photo by Connor Cummiskey)

Candidates for the Anoka-Hennepin School Board and Ramsey City Council discussed a variety of topics at a candidate forum Oct. 2 at the Sandburg Education Center in Anoka.

During the forum, sponsored by the League of Women Voters, contenders for three seats on the Anoka-Hennepin School Board and one seat on the Ramsey City Council answered questions submitted by the audience.

The only Anoka-Hennepin seat contested is District 1, currently held by Board Chair Tom Heidemann. Erin Heers-McArdle, of Anoka, is challenging him.

Heers-McArdle is a fine art jeweler and metal smith, a combination of her childhood loves of art and math, she said. She moved to Anoka three years ago and has a son entering his fourth year in the district. She has two decades of experience working as an advocate for people with disabilities.

“We can’t keep good teachers around if we aren’t paying them well, and every study out there shows that teacher experience is one of the two measurable (indicators) when it comes to students doing well in school,” Heers-McArdle said. The other being class size she said.

“My top priority is successful students,” Heidemann said. “Everything we do is about students being successful post high school.”

He added it was his priority to make sure the district had the programming and supports to meet the needs of a diverse student body while fostering the whole child.

The first audience question fielded asked the candidates their views was on how the School Board should seek out the opinions of the district’s employees.

Heers-McArdle said she wanted to set up a way for teachers to meet in small groups where they don’t feel threatened.

“That’s one of the things I’ve talked to a lot of teachers about, and they don’t feel they’re being heard by the School Board, and when I’ve asked ways that would work they have specifically said that they would like to meet with people who will keep their views anonymous,” she said.

Heidemann said the problem goes back a decade when teachers didn’t really have a way to have a voice on policy decisions. He said teachers are now brought into discussions on curriculum early. He also added that anonymous surveys are done every year as part of the engagement process.

When asked about increasing trust in the School Board, Heers-McArdle said her experience as a parent and talking to members of the district has led her to think there needs to be greater transparency in how the board communicates with teachers and parents.

“Community forums are wonderful and having people able to come to School Board meetings and speak is great, but when you get a few minutes to speak with no response it doesn’t really feel like you are being heard,” Heers-McArdle said.

Heidemann said he prefers to go out in the community and engage the public instead of waiting for issues to come to the board. He also said the board does respond to everybody who comes to speak at board meetings.

One question raised concerns over a perceived increase in racist and discriminatory behaviors in the district.

Heidemann said the teachers in the district are trained on how to acknowledge their own biases and that issues of discrimination are addressed on a case-by-case basis.

“That would be very troubling in my mind to believe that we have major issues of discrimination because that’s not anything that we would tolerate,” Heidemann said.

Heers-McArdle said one of the primary ways to support an increasingly diverse district would be to improve teacher diversity so the faculty better reflects and can better relate to the student body.

“I am absolutely a supporter of comprehensive sex ed,” Heers-McArdle said. “When we send our kids out into the world on a weekend, high school kids, we tell them quite often, ‘If you’re going to be drinking, I don’t want you to do that, but if you’re going to do that call me, call somebody, be safe. We need to be doing the same thing with comprehensive sex ed, and that’s what it does — we keep kids safe.”

Heers-McArdle extrapolated that comprehensive sex education should be abstinence first because that’s the only way to completely prevent pregnancy and sexually transmitted diseases. However, she also argued that parents would “be joking ourselves” to think that all teenagers will remain abstinent and that teens should be taught about birth control and consequences of sex to prepare them.

Heidemann focused his response on a bill that was passed in the Minnesota House of Representatives but failed to become law, saying he opposed the bill.

“I strongly believe in local control, and I believe that it’s the parents’ choice and the parents’ right to decide the content of certain sensitive areas that progressives within Minneapolis and St. Paul want to drive into our schools,” Heidemann said.

The bill Heidemann referred to was House File 1414, which instructed the commissioner of education to develop one or more models for comprehensive sexual health education programs.

Models would have been required to include medically accurate instruction that were age and developmentally appropriate on subjects ranging from human anatomy and reproduction to consent, abstinence and other ways to avoid unintended pregnancy or transmission of STDs, according to the text of the bill.

Under the bill a district could have opted out of the commissioner’s models, but would have been required to submit its process, materials and training for review.

Heidemann also specifically objected to the bill’s allowance of district employees without a teaching degree teaching sex education if the administration determines they are qualified.

The ongoing litigation against ISD 11 alleging discrimination against a transgender student who was barred from shared changing spaces was brought up as well.

Heidemann said the district has a number transgender students whose needs have been met, except this specific case where a student requested unrestricted access to locker rooms, which the board denied.

Heers-McArdle argued that the big problem was the case-by-case nature of the district’s approach. Instead the district should have clear and concrete policies that inform students of what they can expect, she said.

Josh Fuhreck and Dan Specht are running in a special election for Ramsey’s Ward 3 council seat.

Fuhreck is from Milwaukee, where he grew up and went to school before eventually moving to Ramsey six years ago with his wife. Fuhreck has been on the on the Ramsey Charter Commission since 2017 and has volunteered at his Elk River Church and Free Bike for Kids charities.

Specht has volunteered with the PACT Charter School, eventually being elected to the school board and becoming board chair. Before that he served on the personnel and steering committees.

Fuhreck said the biggest issue facing Ramsey today is roads and in the short term he wants to secure funding for them. Long-term his goal is to budget for Ramsey’s needs to prevent future shortfalls.

“We should never allow ourselves again to be in the position where our roads are failing and we don’t have the money or plans to pay for it,” Fuhreck said.

He later added that getting spending under control, a more complete vision of the future and a business-friendly environment were some of his primary goals for Ramsey.

Specht emphasized the importance of fiscal responsibility as well as maintaining road infrastructure and cultivating a business-friendly environment. He also advocated for maintaining the rural character in the parts of Ramsey where that aesthetic is wanted.

On the 6% increase in the preliminary levy, Fuhreck was reluctant to say one way or the other without being part of the council’s discussion but supports limited government. However if the 6% increase was what was necessary to pay for the necessities he would support it, Fuhreck said.

Specht said he wanted to dig into the budget to find further cuts and stop the yearly increase in the levy, but wouldn’t say decisively if he would vote for or against the levy increase.

When a potential four-story hotel proposed off of Armstrong Boulevard was brought up, Fuhreck appeared skeptical but said after discussing it with his wife he came to the conclusion that it made sense considering the expected growth of Ramsey.

Specht drew attention to a possible restaurant in the hotel and a retail business adjacent to it.

“It’s really at a point where I think it’s interesting,” Specht said. “I think we need to hear out the details. Let’s pursue this, but let’s find out more about what that retail business would be that they’re talking about bringing next to it, ensure the restaurant would be one that the community would want, and if those all come together then yeah, I could see it being beneficial to the community,” Specht said.

Regarding Highway 10, Fuhreck said he supported turning both Sunfish Lake and Ramsey boulevards into overpasses because of his experience with Armstrong Boulevard becoming more efficient and safer after it became an overpass.

Specht said he supported both intersections to support the businesses located along Highway 10 but also said he wanted to hear about the concerns he suspected lay behind the question.

To view the forum in its entirety go to qctv.org/elections.