A Ramsey County judge last week roundly rejected the arguments by a group of businesses and state legislators who sued Gov. Tim Walz over his COVID-19 executive orders.

The suit, filed May 28 in Ramsey County, claimed not only that the governor’s emergency orders were unlawful but that the state statute authorizing peacetime emergency declarations is itself unconstitutional.

The lawsuit asked the court to prevent the governor from enforcing existing COVID-19 orders and bar him from using emergency powers to issue new orders. It was one of several lawsuits that have challenged the validity of the governor’s orders.

Plaintiffs in this case included Title Boxing in Coon Rapids and Yoga By Blisstopia in Blaine, as well as the four-member New House Republicans Caucus, which includes Rep. Cal Bahr, R-East Bethel. Several other businesses and the Free Minnesota Small Business Coalition were also named.

In a judgment entered Sept. 9, Judge Thomas Gilligan Jr. found that the legislators did not have standing to sue. Although Gilligan determined the other plaintiffs had standing, he agreed with the governor's position that their arguments lacked merit and dismissed the case.

Gilligan ruled the governor’s actions complied with the state law governing peacetime emergency declarations. The judge also found the statute itself to be constitutional because the Legislature provided a reasonably clear standard for action when it delegated emergency powers to the governor.

The plaintiffs are appealing the ruling.

The lawsuit, filed by attorney Erick Kaardal, who is known for challenging government entities in court, argued three main points.

“The legislature may, however, delegate power when it provides a ‘reasonably clear policy or standard of action,’” Gilligan wrote in his judgment. He found that the statute in question “provides a reasonably clear standard to guide the governor during times of emergency and peril.” Not only does the law provide specific conditions for declaring an emergency, Gilligan pointed out, but it also includes strict time limits “which provide safeguards within both the Executive and the Legislative Branch.”

State law allows the governor to declare a state of peacetime emergency for one of six reasons: an act of nature, a technological failure or malfunction, a terrorist incident, an industrial accident, a hazardous materials accident or a civil disturbance. Before declaring a state of emergency, the governor must also determine that the emergency endangers life and property and that local government resources are inadequate to handle the situation.

In addition to defining the circumstances that constitute an emergency, the law prescribes that extended emergency declarations are subject to regular legislative review, even if the Legislature isn’t in session.

“Every thirty days since the Governor declared the peacetime emergency, the Legislature has had the opportunity to monitor and terminate it,” Gilligan wrote.

The plaintiffs’ second argument claimed the peacetime emergency statute contains an unconstitutional “legislative veto” provision. This refers to the Legislature’s ability to end a peacetime emergency lasting more than 30 days by a majority vote of each house. The plaintiffs’ argument drew a parallel to a 1983 federal case in which the Supreme Court ruled a legislative veto unconstitutional.

Gilligan rejected the argument, saying the federal case does not apply in this instance. That case involved a legislative veto by only one house of Congress, instead of both, and it applied to interpretation of the U.S. Constitution, not the Minnesota Constitution.

Gilligan added that he was “concerned about refereeing a political dispute between co-equal branches of government over the continuance or termination of peacetime emergency powers, when those branches have both an obligation and an opportunity to resolve those disputes between themselves.”

The lawsuit’s third argument claimed that even if the state’s emergency declaration law is constitutional, it doesn’t allow the governor to declare a peacetime emergency for a public health crisis. Although the law allows an emergency declaration for an “act of nature,” plaintiffs said that refers to “catastrophic one-time occurrences like an earthquake, flood or tornado” and can’t apply to a pandemic.

Gilligan rejected the argument, saying that both the plain language of the law and the statute as a whole make it clear that a pandemic qualifies as an “act of nature.”

“The COVID-19 pandemic has been an overwhelming and unpreventable event in Minnesota that has caused over 1,800 deaths and continues to pose a serious health risk to all Minnesotans,” Gilligan wrote. “COVID-19 is a disease caused by a virus – a natural event. It is spread from person to person – again, a natural event. The force and effect of this disease spread quickly throughout every part of Minnesota and has persisted. At this point, there is no vaccine and there is no cure for this disease. It (is) difficult to understand how a pandemic caused by a deadly virus could be characterized, other than as an ‘act of nature.’”

According to court documents, the plaintiffs are asking the Court of Appeals to review the questions of whether the state statute violates the Constitution by delegating legislative powers and by authorizing a legislative veto. 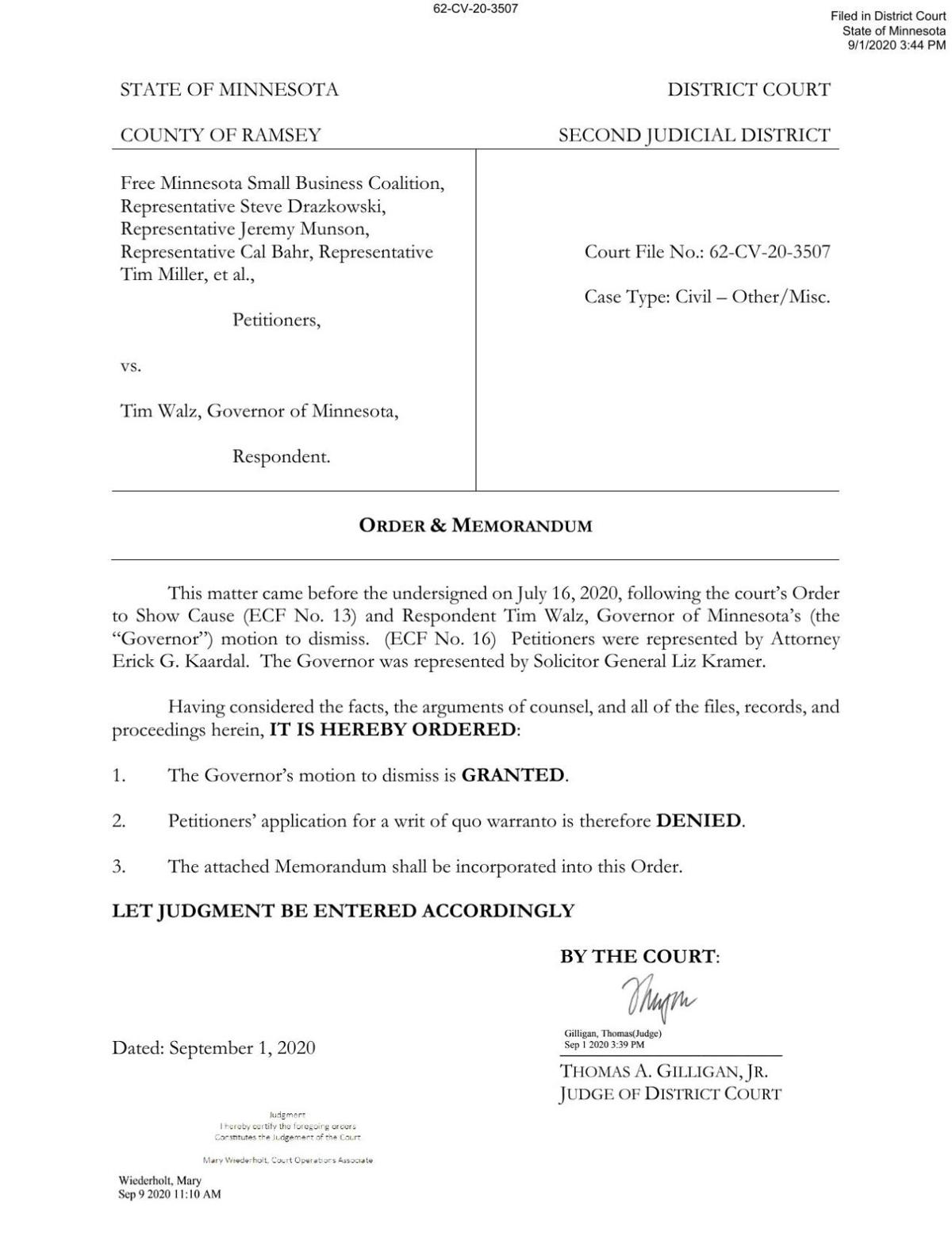