Approximately 750 Anoka County businesses received loans of at least $150,000, and six took loans of at least $5 million, under the federal Paycheck Protection Program, according to data released earlier this month by the U.S. Small Business Administration.

The program, approved by Congress as part of the coronavirus relief bill in March, offers forgivable loans to small businesses as an incentive to keep their workers on payroll, according to the SBA.

In Anoka County, recipients ranged from restaurants to churches, and from manufacturers to the publisher of ABC Newspapers.

Anoka County businesses that received $5 million to $10 million were:

• Minco Products Inc., a Fridley manufacturer of products for the medical, industrial, military and aerospace industries.

ABC Newspapers reached out to all six companies for comment. Kurt, Mate, Minco, and Plunkett’s did not respond to requests for comment.

When the pandemic hit, the company went from about 450 people working at its Blaine campus to about 10. Many people could work from home, but others had positions that were more difficult to manage remotely. At the same time, the company’s revenues dropped.

“The prudent business thing to do would have been to lay off some of our staff,” Kratsch said.

The PPP loan prevented that and has actually allowed the company to hire some positions.

“It was very much, for us, a help, and definitely for those employees that would have been impacted,” Kratsch said.

He believes the company is an example of the program doing what it was meant to do — keeping people employed.

Adams Publishing Group, which is listed in the loan data as Adams Communications Company LLC, also said the money it received prevented many layoffs or furloughs that would otherwise have been necessary.

The company issued the following statement:

“APG applied for a PPP loan and was approved, for the purpose of maintaining its workforce at the SBA recommended 75% pre-COVID level. In anticipation of the PPP loan, APG did not resort to layoffs and furloughs for the vast majority of its workforce. Like many newspaper companies, COVID-19 has significantly impacted our business and revenues. The PPP loan proved to be a lifeline for APG and other companies like ours. We are most appreciative of the SBA for making this program available to us and others like us. Without it, we would have been forced to reduce our employee base significantly.

“Like all businesses, we are greatly looking forward to a post-COVID world where we can see restored economic activity in the communities we serve, and continue to provide the highest quality journalism both print and online.”

APG didn’t avoid all reductions, however. In late March it announced it was reducing full-time employees’ hours by 25% and eliminating most freelance, contract and part-time positions. The reductions remain in place.

Adams Publishing Group is family owned and publishes community newspapers around the country, as well as magazines and niche publications. Other Adams family enterprises include billboards, radio, wine, Camping World/Good Sam and “significant philanthropic endeavors,” according to a company website.

In addition to the top tier of PPP recipients, 23 Anoka County organizations received loans of $2 million to $5 million, according to the SBA data.

More than a dozen churches received loans, including the multi-campus megachurch Eagle Brook, which accepted between $2 million and $5 million, according to the SBA.

Nonprofit organizations were also on the list, such as Feed My Starving Children ($2 million to $5 million), as were private schools, including Totino-Grace ($1 million to $2 million).

Loans have an interest rate of 1%, and payments are deferred six months, according to the SBA website. The loans will be fully forgiven if employers meet program requirements and use the funds for payroll costs, interest on mortgages, rent and utilities. At least 60% of the forgiven amount must have been used for payroll.

“Forgiveness is based on the employer maintaining or quickly rehiring employees and maintaining salary levels,” according to the SBA. “Forgiveness will be reduced if full-time headcount declines, or if salaries and wages decrease.”

The SBA itself doesn’t approve PPP loans but delegates the process to lenders. Applicants must self-certify they are eligible, and lenders review the paperwork, approve the loans and submit them to the SBA.

All loans are subject to SBA review, and all loans over $2 million will automatically be reviewed, according to the SBA.

ABC Newspapers has compiled a list of Anoka County businesses that received at least $150,000. Available here, the list is based on an analysis of zip codes and addresses in order to account for the local businesses that listed cities such as Minneapolis in their mailing addresses.

Originally slated to end June 30, the PPP program has been extended and is accepting applications through Aug. 8. 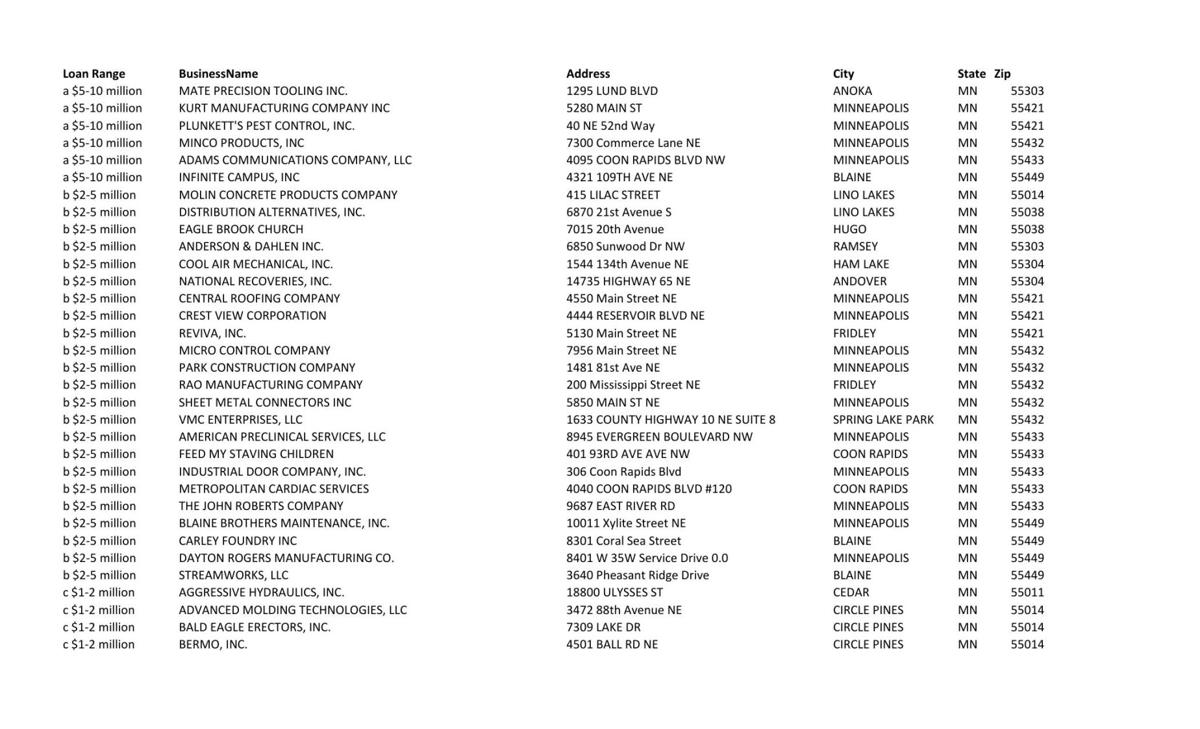