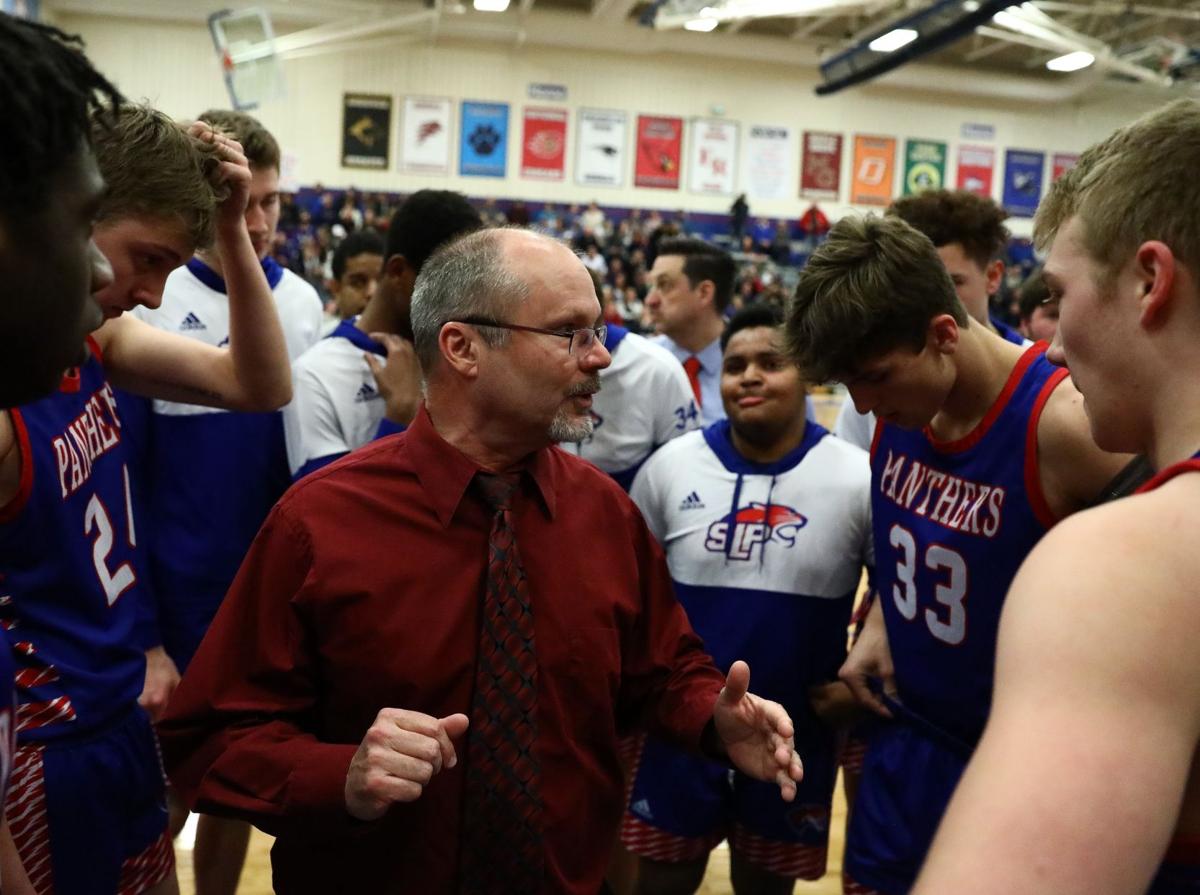 Spring Lake Park head coach Grant Guzy addresses the Panthers during a late regular season game. The Panthers went from a five-win season three years ago to posting a 23-5 record this winter, but had its chance at a historic Class 4A section championship wiped out by the shutdown of Minnesota sports due to COVID-19. 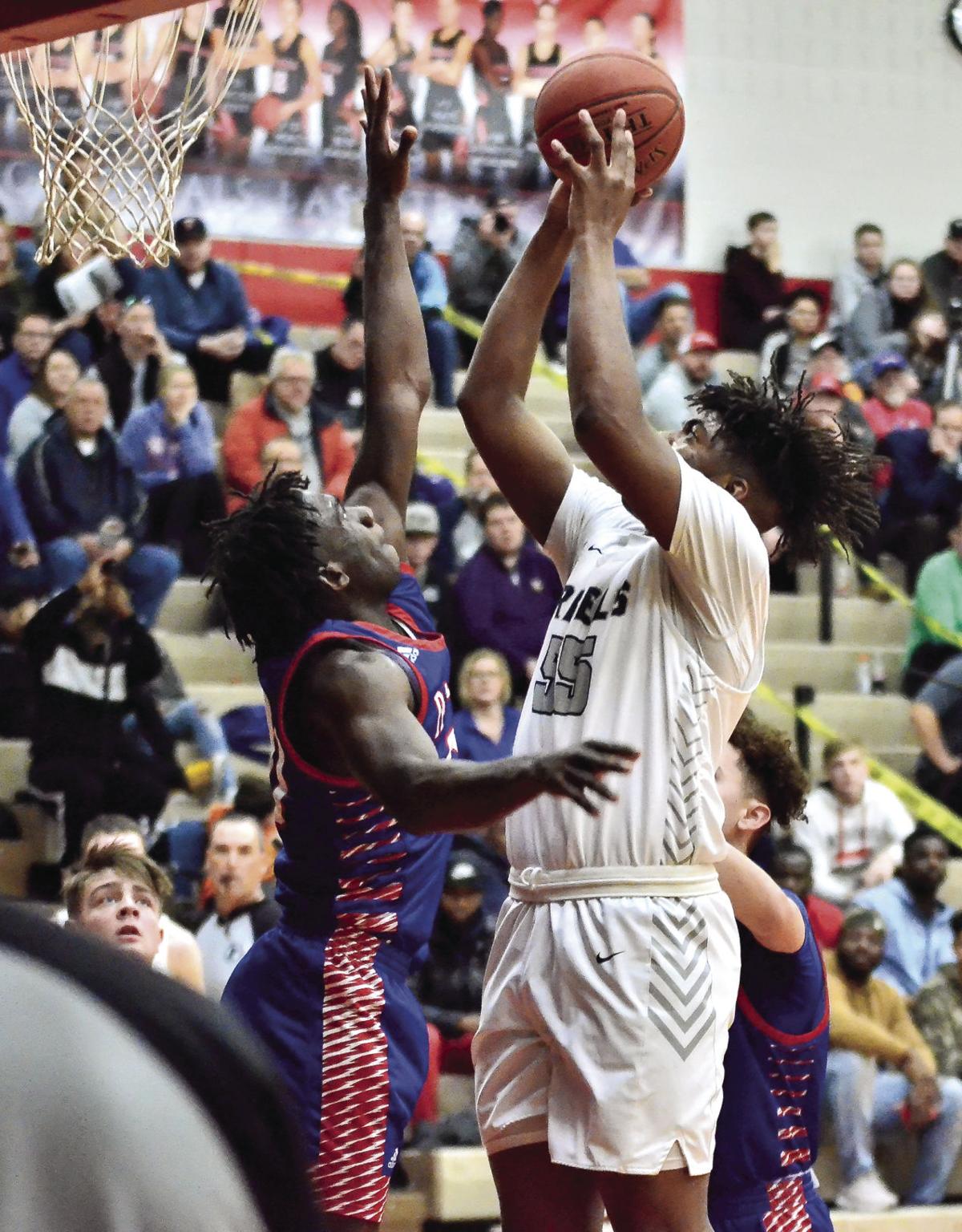 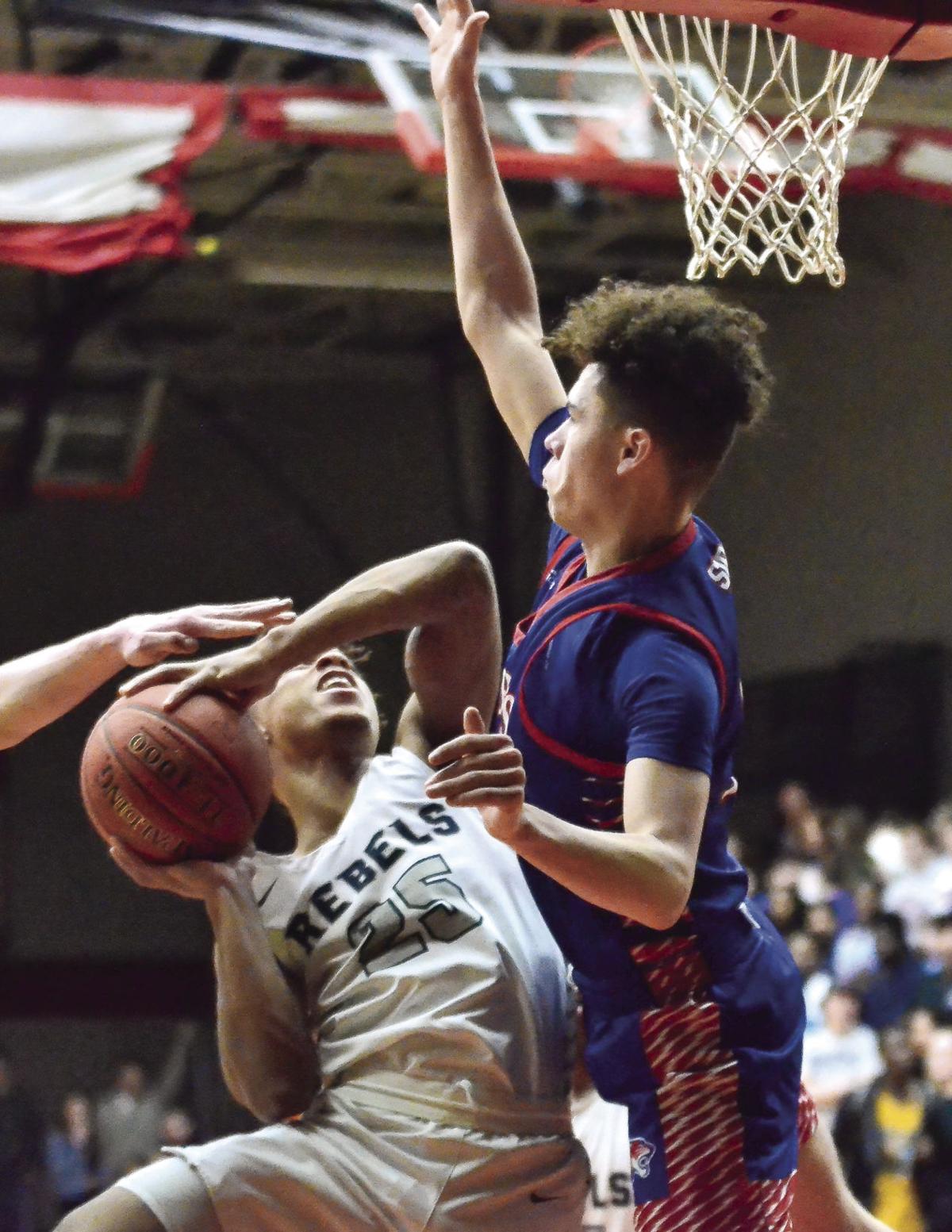 Spring Lake Park head coach Grant Guzy addresses the Panthers during a late regular season game. The Panthers went from a five-win season three years ago to posting a 23-5 record this winter, but had its chance at a historic Class 4A section championship wiped out by the shutdown of Minnesota sports due to COVID-19.

It wasn’t the ending the Spring Lake Park boys basketball team dreamed of. It wasn’t really an ending at all.

A night circled on the calendar long ago, of a potentially historic Section 5AAAA title on the line and a chance for the school’s first-ever Class 4A state tournament bid, was never to be as the COVID-19 virus shut down the remainder of Minnesota high school sports hours before tip off March 13. The announcement left the Panthers’ 23-5 season at an abrupt end, one of the best in school history, but one that felt incomplete.

“It was a very difficult day on Friday,” Spring Lake Park head coach Grant Guzy said. “We were just getting ready for our shootaround/walkthrough and final preparations for the championship game that night when we got the word from the MSHSL (Minnesota State High School League) that everything was canceled. We were done playing and were not going to have that chance to finish it out on the court, which was very hurtful. There were many tears shed.

“But, showing the character of our young men, they were very supportive of each other and the coaching staff. This was something way out of their control and much bigger than basketball. We preach to our guys all the time not to worry about the things they cannot control and focus on that which they can control. I believe our guys are focusing on those things now, taking care of family and friends, staying safe and healthy and continuing to give everything they have to everything they do.”

Not getting a chance to finish out the season on the court had a particular sting for Spring Lake Park, a team that had built its way up from winning just five games three years ago into a consistent presence in the Class 4A rankings this winter, closing the regular season at No. 9. The team was also peaking at the right time, opening the playoffs with a 79-45 win over Roseville in the Section 5AAAA quarterfinals March 4, then rolling past Champlin Park 80-59 in the semifinals March 10.

“We were playing very well! In the quarterfinals versus Roseville we could have taken them lightly after beating them by 35 in January, but we did not,” Guzy said. “We knew they were better and had just beaten a decent Irondale team in their last game. After a somewhat slow start, we picked up our pressure defense and made a couple of runs to end the first half and start the second half to put them away.”

Spring Lake Park continued to shine against Champlin Park, avenging a loss from its regular season finale. Gabe Myren led the way with a 33-point night, with 12 points by Kaleb Skelly and 11 apiece by Jacob Say and Blake Remme.

“We came out of the blocks defending well and hitting shots versus Champlin Park, who had just beaten us by eight at their place a week and a half ago,” Guzy said. “We got up 11 points early, but Champlin Park answered with a 10–0 run to even the game up. We ended the half with a nice run to go up 10 at half. We continued the run early in the second half and got up by as much as 31 points before we emptied the bench. We were defending hard, rebounding well and finding the open man and the hot hand on the offensive end, so we were playing some of our best basketball of the season in section play.”

The victory set up what was to be a showdown against powerhouse Park Center, a team the Panthers had been on the verge of knocking off the past three meetings. Playing its best basketball, Spring Lake Park felt primed for the challenge, and a chance at the state berth to go with it.

“We wanted another shot at Park Center,” Guzy said. “We were right with them in the chase for a conference title and we had played them very tough in our last three meetings (two this season and the last meeting last season), but coming up just short in each one. We felt we were ready to make things happen in the championship game on Friday night.”

Nonetheless, the team’s senior captains Daydor Philips, Myren, Say and Remme helped lead a resurgence in the program that put it among the state’s best, cementing the team’s place in school history.

“Our four senior captains were a special group of players,” Guzy said. “All four came up through our outstanding youth and traveling programs. They knew each other’s game and became very close on the court. They battled with and for each other every day of the season. They also paid their dues during their four-year high school careers. We were 5-22 their freshman season, 12-16 their sophomore year, 15-12 last season as juniors and then 23-5 as senior leaders. All four earned all-conference honors this season and will be playing at some college or junior college level next season.

“A lot of work went into the success we enjoyed this season. Our group bought into getting better day after day and year after year of their high school careers. They also were motivated to make some history for our program in Class AAAA. We had been very successful back in Class AAA for a number of years, making it to eight section finals and three class AAA state tournaments. This team was hoping to win the program’s first AAAA section title. All of our guys worked extremely hard in the weight room and on the court all offseason and in season this past year.”

Additionally, after opening the season by each crossing the 1,000-point milestone in back-to-back games, Myren and Remme surpassed the previous school record for career scoring on the same night near the end of the year.

“Gabe Myren and Blake Remme will both go down as two of the best boys basketball players in school history! It was a special night in our second to last regular season game up at Anoka when both surpassed Sean Scott’s school record of 1,414 points scored with him in attendance at the game,” Guzy said.

A year of lofty numbers and pushing the program to new heights. An all-too-soon ending without the closure of knowing the last time on the court would be the final time, yet a winter of cohesive and exciting basketball that won’t soon be forgotten.

“This group of players had a very special and historical season: 23-5 overall, which was one of the best seasons ever in SLP boys basketball history, 15-4 in the ever-tough NWSC, which is the best finish to date in that big-school league and an undefeated 2-0 record in competitive Section 5AAAA! Our guys learned that working hard, playing hard, playing smart, playing together as a family, having fun and showing class really pays off,” Guzy said. “And, we were able to finish the season with a big win, which in most seasons would mean a state championship or third-place finish, but not in this bizarre COVID-19 season.”