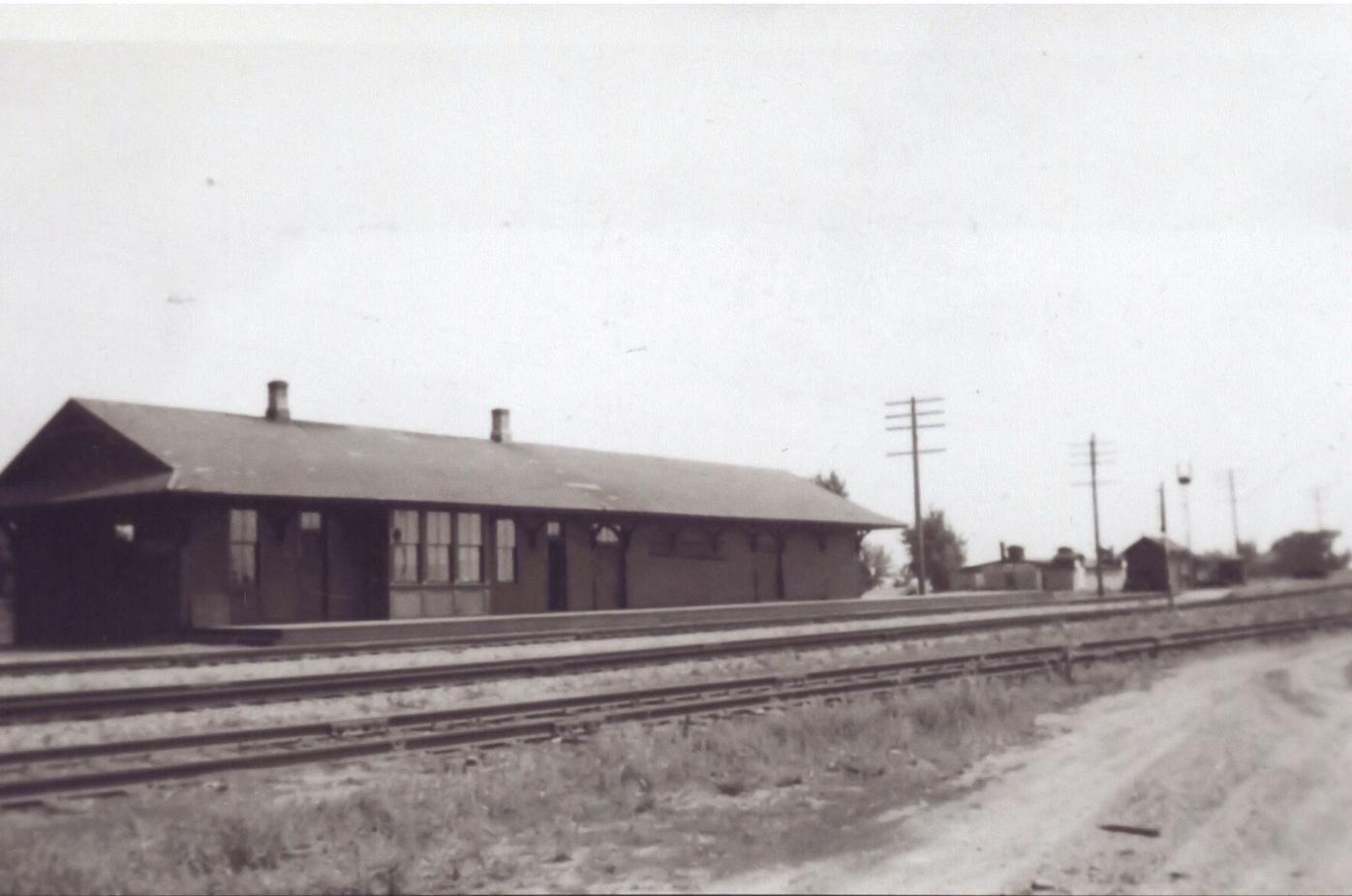 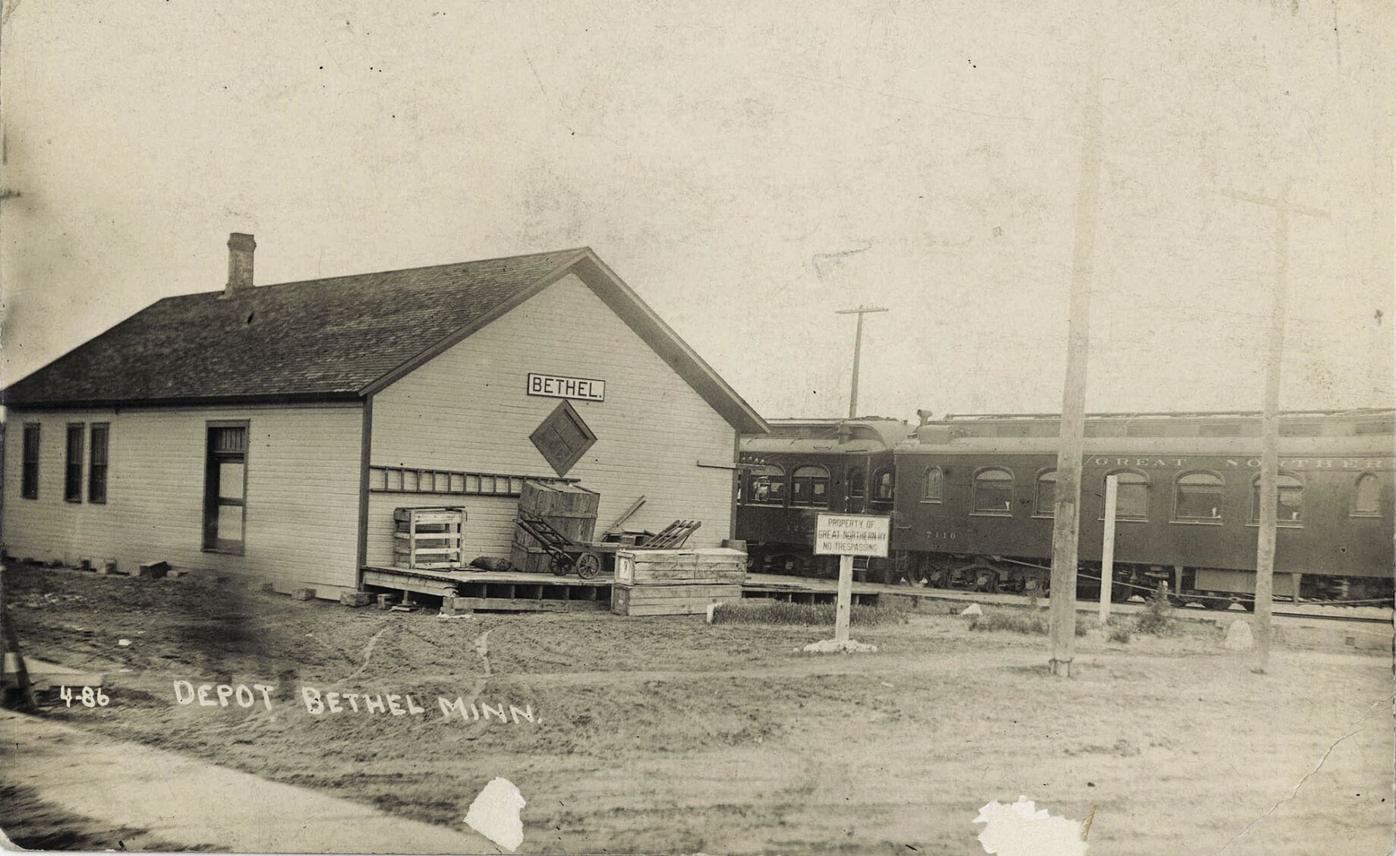 This postcard shows the Bethel train depot in 1917 with a Great Northern train on the tracks. The back of postcard says the sender reached Bethel, will spend the night there, and will be in Anoka on Saturday. (Photo courtesy of ACHS)

This postcard shows the Bethel train depot in 1917 with a Great Northern train on the tracks. The back of postcard says the sender reached Bethel, will spend the night there, and will be in Anoka on Saturday. (Photo courtesy of ACHS)

Railroad development in our county began in 1857 under very speculative conditions and involved federal and provincial subsidies. The high cost of construction and maintenance combined with a volatile market caused many bankruptcies, which resulted in James J. Hill taking advantage of the closures to create his empire.

In Anoka County it was the connectivity of the Great Northern and later the Northern Pacific to national markets that assisted in promoting economic growth. Branch connections, spurs, sidings and depot development gave Anoka County an infrastructure that facilitated prosperity, whereas today the county serves as more of a freight “pass through” site. The spurs to local mills are long gone, as are the mills and factories they served. The last vestiges of the “Golden Age of Railroading” (1864-1928) are rapidly disappearing or already gone. The Anoka spur bridge crossing over Highway 10 between Fourth Avenue and Ferry Street is a perfect example — it is to be decommissioned this year as Highway 10 is rebuilt. Other remaining examples are the three bridges over Coon Creek Boulevard and the two bridges over the Rum River.

Our territorial assembly chartered the first rail company in 1857. The Minnesota & Pacific RR received private funds and ownership of native lands totaling 2.6 million acres to establish a 62-mile line from St. Paul, head of Mississippi River shipping, to the Watab sawmill complex in Sauk Rapids. Workers surveyed the land and cleared a right of way, but the company’s charter expired after the company a small amount of track. All rights and inventory were transferred to the new St. Paul & Pacific RR. With English financial backing, track was laid to St. Anthony (later Minneapolis) in 1862 and to Anoka in 1864. The two sections of track were conjoined when the trestle across the Rum River was constructed in 1867.

To promote rail development as a mass transit system, the U.S. Congress, the Minnesota Legislature, banks and local governments provided economic incentives. Congress and our Legislature offered land grants of acreage from the Indigenous population beyond the rail right of way to be used for sale or collateral. State and local governments underwrote loans and bonds to pay investors. The different companies needed income, which would come from freight, passenger fees and the sale of land grant property. To accomplish this, from the very beginning, the railroads turned to immigration.

A sophisticated system of promoting immigration developed as companies opened departments of immigration and land development. Starting with targeted European centers, the immigration departments sent over agents who promoted Minnesota through pamphlets, lectures, advertisements and circulars. Agents were present at each step of the immigrant’s journey. Once immigrants reached their chosen area, reception centers or “local facilities, poor as they were, for cooking, sleeping and washing were strategically located in underdeveloped areas to encourage settlement.” Agents often encouraged groups traveling together to form a colony.

An example of rail construction into a sparsely populated area was the Coon Creek Junction cut off. The GN split its line going north (1899) with projected stations every five miles in Anoka County. This cut off facilitated settlement but also represented the further development of infrastructure. Earlier examples included the building of the Anoka spur just west of the original depot to downtown Anoka and the trolley line from Anoka to Minneapolis.

With the loss of federal subsidies after WWII, passenger service became dependent on profits from moving mail and express items. When the U.S. Postal Service took over mail and express shipping in 1969, it was the last straw; even continental passenger service would be eliminated. Congressional reaction was to create AMTRAK, the National RR Passenger Cooperation, in 1971 for continental travel. Locally, we have created our own mass transit interurban, the North Star Commuter.

Chuck Zielin is a volunteer for the Anoka County Historical Society.