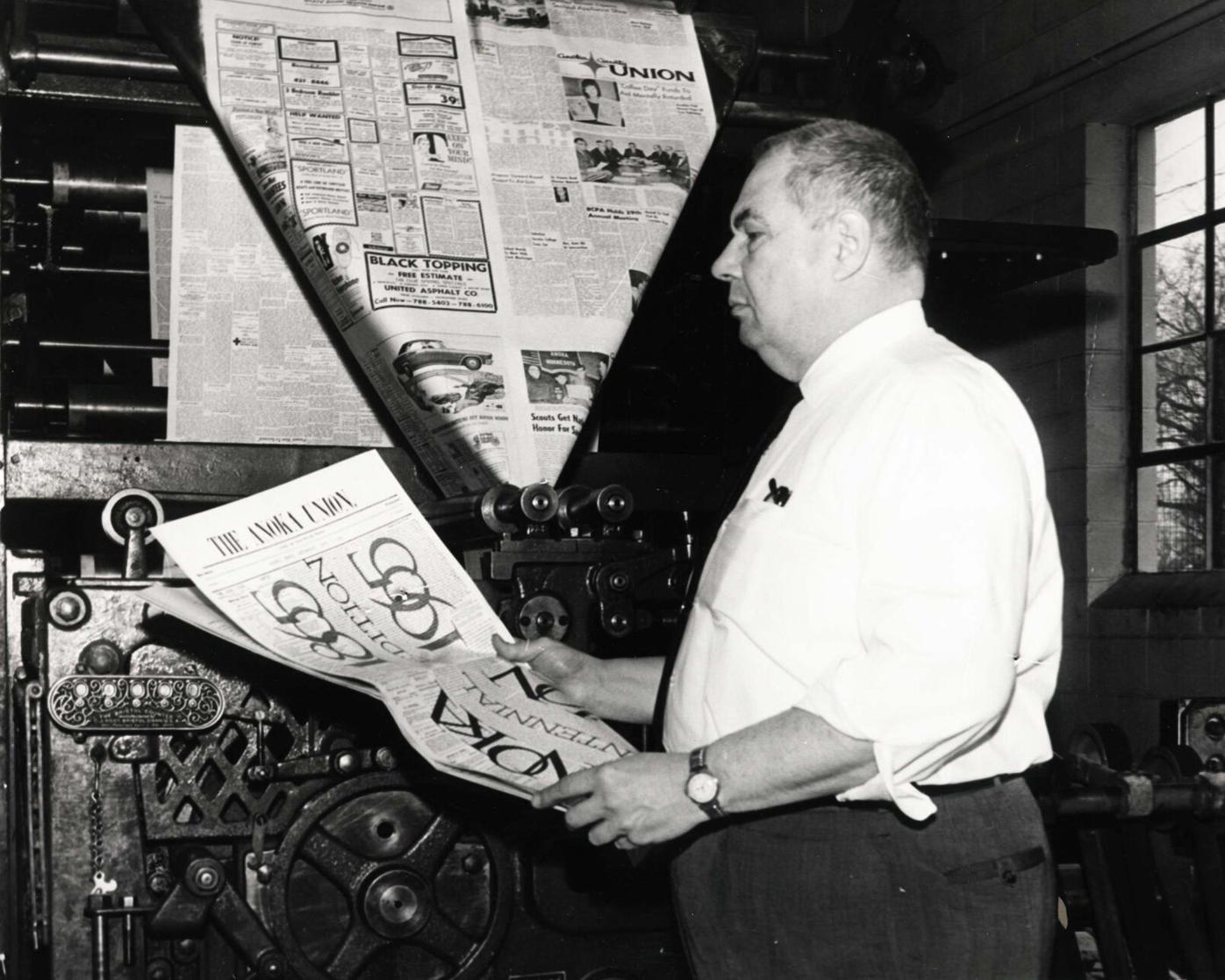 Arch Pease by a press holding the 1965 (Centennial) edition of the Anoka Union. (Photo courtesy of ACHS) 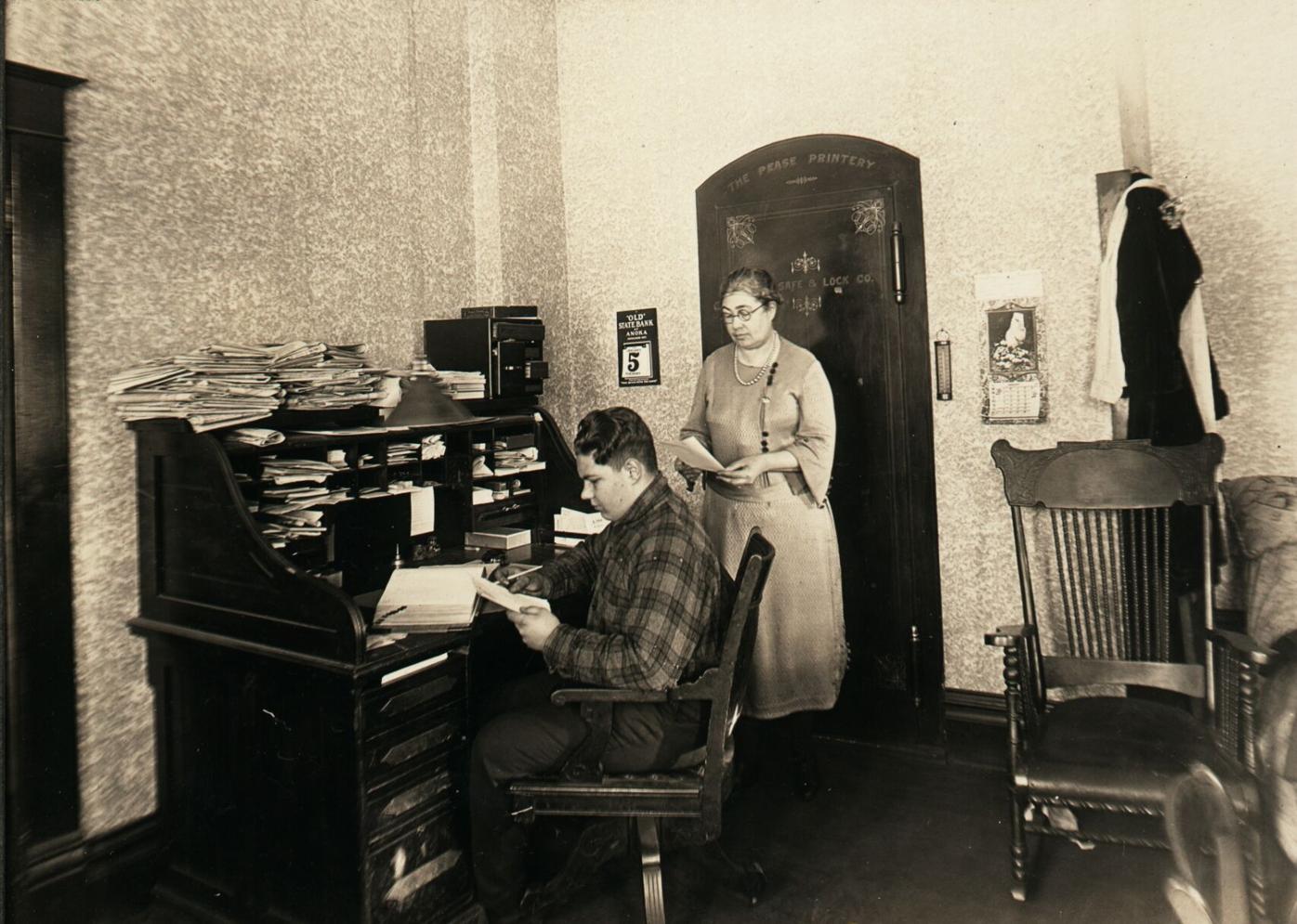 Arch Pease by a press holding the 1965 (Centennial) edition of the Anoka Union. (Photo courtesy of ACHS)

The following is an excerpt from “Memories of Life …” by Arch G. Pease, pg. 45-51. Ellipses indicate text removed by ACHS for narrative purposes. Read his full memoir in History 21: The Vault and tune into History 21: The Podcast to hear an oral interview with Pease conducted in 1989.

Newspapering Was My Business

It was a rather beautiful September day as I walked from my home at 8th avenue and Main street in Anoka to the printing office at the foot of Harrison Street. And as I walked, I couldn’t help but second guess myself. I should have taken any one of the jobs that had been offered and I would be on easy street for some time. Had I made a mistake? It was too late to change. And so I entered into the building noting that it needed paint, that the front wall slanted, that the whole area was in more than a dilapidated condition. The front office, scarcely big enough to hold three people let alone my father, mother, bookkeeper and myself, had to be rearranged and there was no money to do so.

That first week was a nightmare. While my mother and I got along very beautifully at home, yet she was a demon when in the office. Nothing could be done to suit her and I was not one to accept the relentless criticism that poured out daily.

On October 1st I quit. I went home and was in a real state of despair. I knew it would not work because it just wasn’t working. Every suggestion that I made was turned down. And that was that.

Shortly after 5 o’clock that evening, my father and mother drove into the yard and dad asked me, “What is it you really want?” I told him and I minced no words. I was to be in charge of the plant. He and I would work out the policies together. Mother would have to stay home. A five year plan would be worked out for the improvement of the plant.

... In 1948 things had improved a bit but the cash position of the plant was poor to non-existent. What was needed was a new press to replace the three currently in use. It had to be a press that could handle at least eight 8 column pages or 16 tabloid and print from a roll. ... It was a usual Monday at the office when the phone rang … the caller said that he knew where there was a used newspaper press for sale and suggested that he call a man named Fred Turner in New Ulm, Minnesota, as the press was located there. “I will call him right away,” I said, “and many thanks for tipping me off.”

After hanging up the phone I turned to my father and said, “There is a newspaper press for sale at New Ulm in the newspaper office there and I think that we should take a good hard look at it.” My father answered, “We could surely use it but we cannot afford it. Do you know what the price would be?” I answered that I did not but that I would find out. Fred Turner was called and I learned that the press was a Model E Angle Bar Duplex, capable of printing from a roll and eight pages, eight columns wide at a time. The cutoff was 22 1/2 The asking price was $10,000.

When my father was told of this he simply replied, “We cannot afford it.” And that seemed to end the matter.

On Saturday morning, Arch, in company with his wife, Amy, and two children, Barb and Tom, left Anoka and drove south to New Ulm. He found the offices of the New Ulm Daily Journal and entered the building. … He was shown into the basement where the paper had its pressroom and there, sure enough, was the press. … It took some time but a price of $6,500 was finally agreed upon ...

But how was the press going to be paid for? That was a big question. The $950 that had been put aside was hardly enough to do the job. That bothered. First of all we knew there was no chance of getting financing in our home town. That was for sure.

Learn more about the Anoka County Historical Society, its podcast and resources at anokacountyhistory.org.