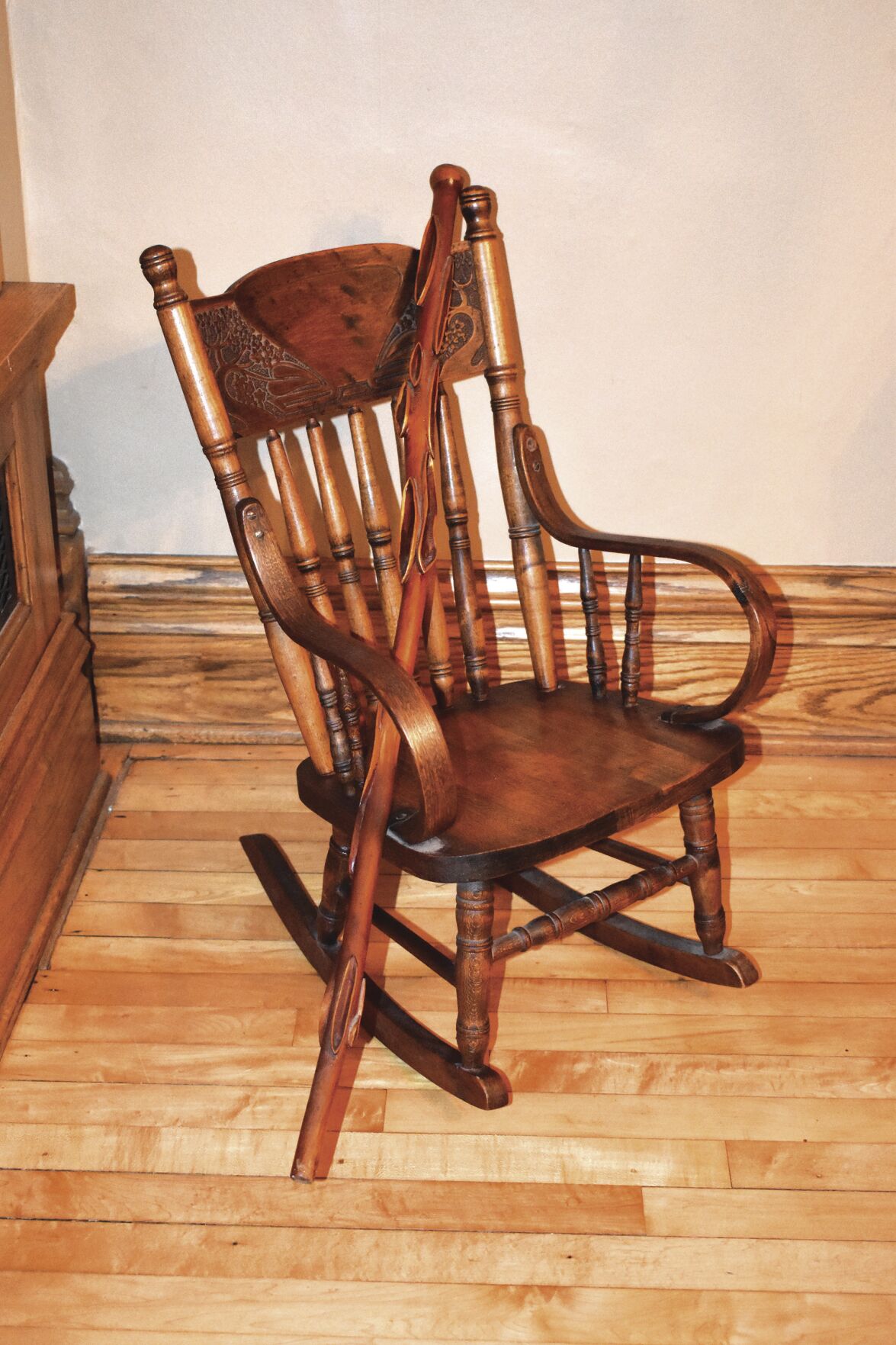 This rocking chair belonged to Jim Rootes’ mother as a child, and the cane was hand-carved by his grandfather. (Photo courtesy of the Anoka County Historical Society) 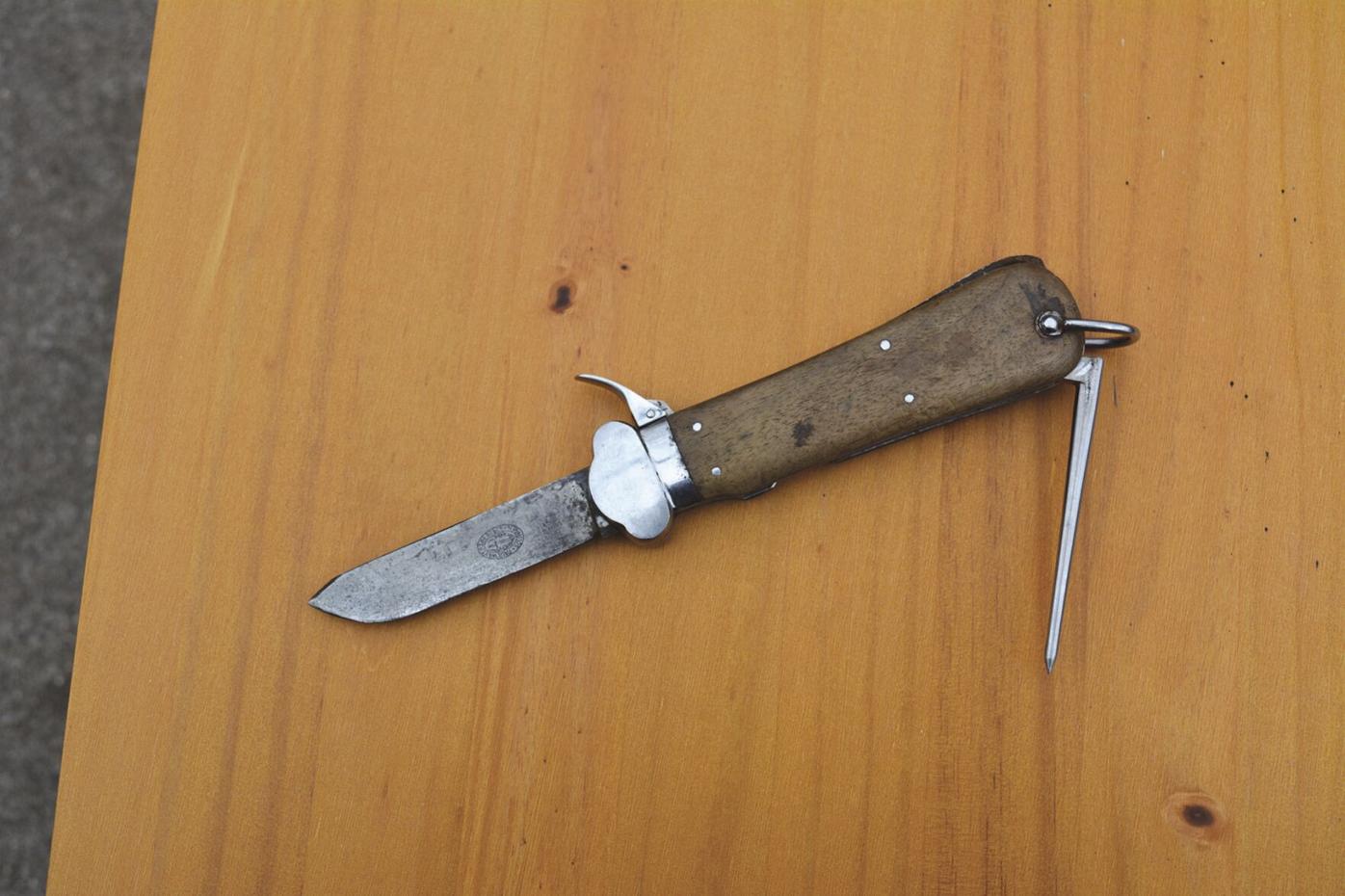 This knife in the style of German knives used by paratroopers and Luftwaffe pilots in World War II is a collectible. (Photo courtesy of the Anoka County Historical Society)

This rocking chair belonged to Jim Rootes’ mother as a child, and the cane was hand-carved by his grandfather. (Photo courtesy of the Anoka County Historical Society)

This knife in the style of German knives used by paratroopers and Luftwaffe pilots in World War II is a collectible. (Photo courtesy of the Anoka County Historical Society)

First it may be appropriate to develop an operational definition of what is an artifact, heirloom or collectible. I have some examples from my own experience and collection.

Let’s start with “collectible.” I have an old knife. I rediscovered it in a toolbox used for storing hunting “stuff.” I vaguely remember it and how it functioned, so I cleaned up some surface rust and sharpened it, added some oil to the wood handle. The manufacturer’s name was stamped on the blade, so I decided see if I could find any information about the knife and its use. I learned the knife style was initially made in the 1930s in Germany and became a standard knife for German paratroopers and Luftwaffe pilots in WWII. To me this is a “collectible” — a unique treasure that represents a specific historical period but has no real story for me.

What could we consider an heirloom? My idea is that it has family significance, like a child’s rocking chair or a hand-carved diamond willow cane. To some the rocking chair would be simply a collectible and the cane an interesting piece of firewood. However, I know the story that goes with these items.

The rocking chair was my mother’s as a child. It was with her when the family lived in Princeton and then on to Isle when the family fell victim to the Depression and lived in a cabin (more like a garage) for several years. The chair ended up in Nowthen after WWII in my parents’ first house. Then it moved to Coon Rapids to a new home and became used by four sons. It later moved to Elk River when my dad became postmaster there. Finally, the chair became a part of my home and used by our three children.

The cane was special to my mother because it was hand-carved by her father; I remember growing up seeing how special it was to her. I can also visualize my grandfather carving that cane. These items have family meaning, values and history. They each have a family story to go with them to pass down to family members. The attached stories make the history.

Other items like these that have a connection to Anoka County and tell a story are a leather knife sheath and wooden knife I have. The knife sheath was a kit that I made as a Cub Scout in Den 3 of Cub Scout Pack 212. My mother (Geneva Rootes) was the den mother. If I search, I may even find an Anoka newspaper article about our den and pack. Who better to carve a knife to fit the sheath than my grandfather — who lived across old Highway 10 near the railroad tracks?

My grandparents had moved to Anoka/Coon Rapids because of WW II. Also, my grandmother’s parents lived in Anoka (that became the family home) on the north side of Main Street kitty corner from what is now the Taylor mortuary. My grandfather worked as security guard during the war and then for the city of Anoka after the war. He put in many of the curbs and sidewalks during the ‘50s.

These last two items could also be considered heirlooms because of the family memories. But they also could be county historical society artifacts due to their ties to Anoka County residents and the activities that people were engaged in during the 1950s. Most importantly, there is a story with each item that ties it to Anoka County.

So if you have some memorabilia that you think the ACHS would be interested in, get the story that goes with. Tie it to Anoka County’s history. Check out ACHS web site for additional information and ideas on what to donate!

Jim Rootes is a member of the Anoka County Historical Society’s board of directors.