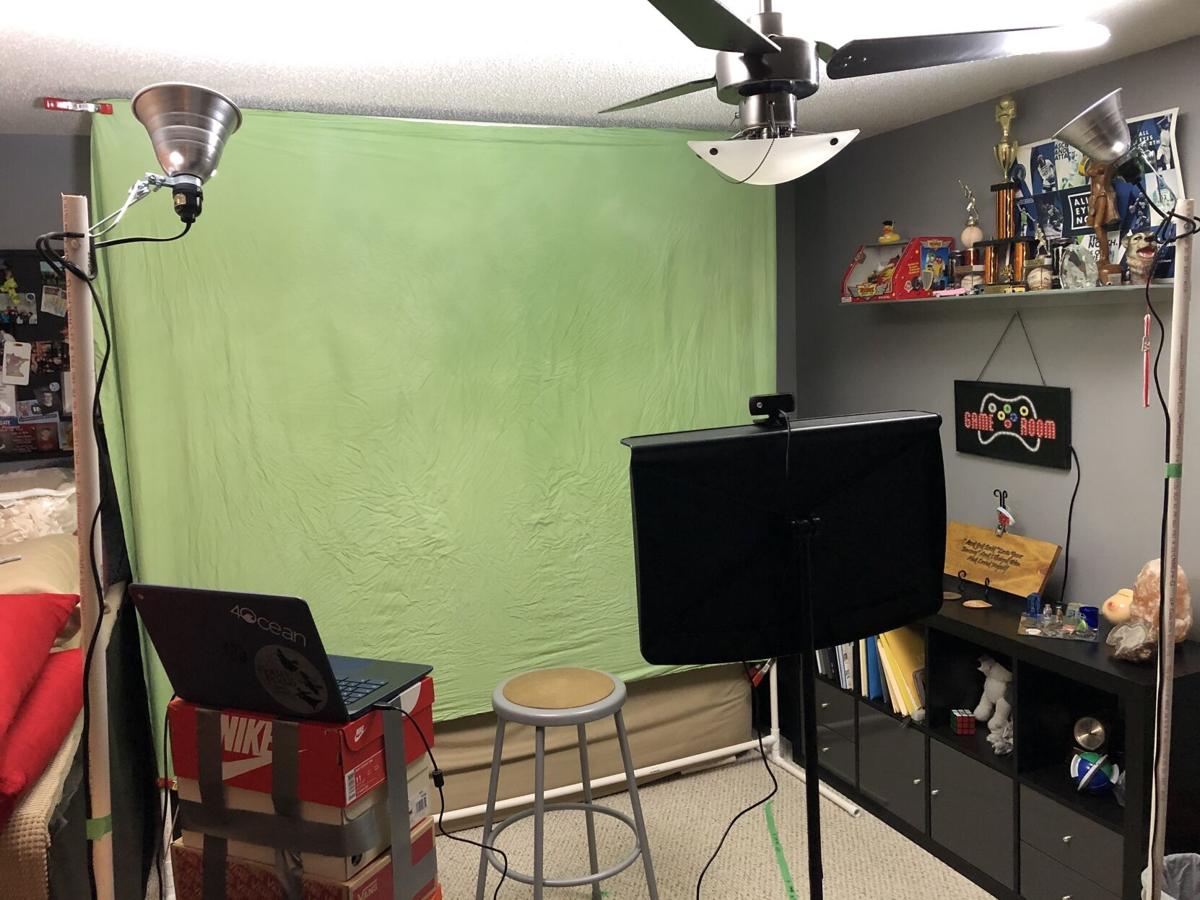 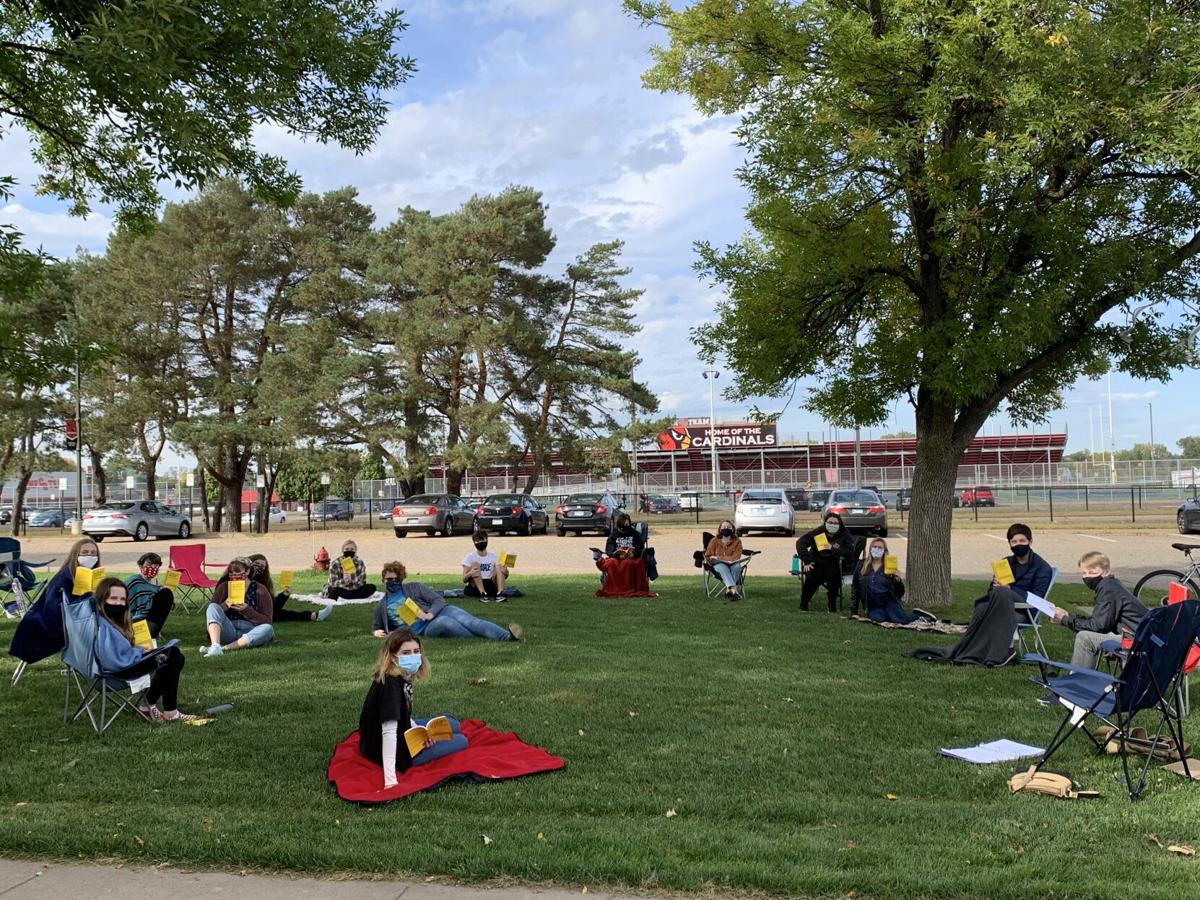 With in-person performances not currently viable, the show goes on for Coon Rapids High School Theatre Nov. 13-15, holding virtual performances in the production of the feel-good play “Almost, Maine.”

“John Cariani has created characters who come to life before our eyes, and we feel their love, loss, humor, joy and wonderment in simple things,” director Karla Haij said. “‘Almost, Maine’ is a tender feel-good show that we can all enjoy in our current chaotic state.”

The play’s setup made it an ideal choice for the change in formats, with scenes and sets needing to be simplified as much as possible.

“‘Almost, Maine’ is structured as nine vignettes with two characters each, which makes it more manageable to produce in a virtual setting than plays with a larger number of characters in a scene,” Haij said. “The play is also character-driven rather than dependent on a great deal of action.

“Virtual theatre (not a Zoom show) has presented challenges and a tremendous learning curve for all of us, but we are thrilled to have taken this journey into a new art form. Also, I love this show!”

“It is very fun and refreshing to read,” castmember Samuel Iribe said. “Overlapping dialogue makes the scenes and conversations feel more real, which is a big part of the show – the realness and humanity of it all.”

There is no script, if you will, to follow for how to pull off a virtual show. A sizeable challenge, yes, but also an exciting opportunity.

“My favorite part is trying to navigate all of the technical elements that need to be in place for this to work,” castmember Danny Rupert said. “All of this is new to us and I think it is so cool to be a part of the process that helps figure it out.”

One of the biggest differences between a traditional in-person show and this virtual performance is an obvious one – instead of fellow actors being right next to one another on stage, they will be in a different location, necessitating extra communication and teamwork to enable the action to flow.

Technical setup and rehearsal times have changed as well. Other differences include simply finding space suitable to perform. All part of making sure everything looks as similar as possible across sets and can run smoothly at show time.

“When we’re in person, we have tech week, which is an entire week dedicated to running the full show with all of the technical elements added,” castmember Riley Peterson said. “Rehearsals usually go from 3 p.m. to 9 or 10 p.m. Virtually, our schedule looks different. We’ve already had individual days dedicated to setting up our technical equipment at home, and we have two tech weeks. But these two weeks only have rehearsals from 3 p.m. to 7 p.m. So far, rehearsals have gone unexpectedly well! We’ve been able to troubleshoot and work together quickly to solve any problems.”

“One of the challenges that we have found in this process is trying to make us all look almost the same within our setups in our own homes,” castmember Hannah Bump said. “It has been an incredibly weird experience to transition theatre to a virtual setting. There are so many things that we never thought about twice that we now have to figure out how to put on a show virtually.”

“I feel that one of the challenges about planning a virtual play is not really having the same amount of space that we would normally have, so trying to adapt to a much smaller stage is difficult,” castmember Nathaniel Larson said. “The feeling of being able to put on a play right now is really exciting. I was nervous that we weren’t going to be able to have theatre this year. I’m honestly most excited about just being able to put on a show.”

“The most difficult part has been setting up our rehearsal spaces,” Iribe said. “It has been a struggle to get everything looking good and fitting within a house.”

The cast was able to do a group read through of the script on the school lawn. Since then, all rehearsals have been done virtually, finding a way to come together from afar.

“The strangest thing about this process is that we are not with each other in-person throughout the rehearsal process,” Bump said. “But we have also found that no matter if we are virtual or in-person, we will still figure out a way to be there for each other and to do what we love and hopefully make people smile in the process.”

There are many things to enjoy about the play, depicted as a “feel-good” production. At the heart of them all is simply being able to perform for family, friends and each other.

“My favorite part about ‘Almost Maine’ is that this is my first time building a complex character that is written into the script, instead of being an ensemble member,” castmember Hails Shager said. “I’m really excited for this different opportunity. Putting together a production virtually is definitely different, but it’s definitely helpful to focus on the positives instead of the negatives. Sure, things could go wrong with technology, but that could have happened in-person too. It’s better to just focus on how incredible it is that we have this opportunity at all. Most high schools aren’t even attempting a virtual show, so I’m just really grateful I’m able to do any theatre my senior year.”

“I am so excited to be putting on this show, even in the midst of a pandemic,” castmember Lana Payeur said. “As far as I know, we are one of the only schools in the district trying something like this, and I am just so grateful that we have an amazing director who is willing to work with us and figure out how to do something like this. I am so excited to put this super fun show on its feet in front of a ‘live’ audience, and with all the hard work the cast and crew have put in, I’m sure that it will be amazing!”

“It’s a special opportunity to do this virtually,” Iribe said. “I’m most excited about being safe first off. But second, I’m excited about having the possibility for a larger audience. Family members who don’t live nearby can watch from the comfort of their own homes. I think that will give higher rates, especially for students, since it is more convenient with their schedules.”

“My favorite part about ‘Almost, Maine,’ is how good it is for a virtual performance,” castmember Alex Erchul said. “With some shows, there are scenes that include dozens of people on the stage at once. With this show, there are only ever two or three people in a scene at a time, giving the show more focus in an online space. It also has lots of heart throughout, making this a great show to be a part of, along with a great show to view!”

No matter how the show goes, it figures to be a positive experience, with students able to perform in the midst of often hectic and stressful times.

“It’s truly wonderful,” Rupert said. “Being able to be a part of something so beautiful when all you ever see is chaos in the world makes every day just a little bit more bright.”

While the play is believed to be the first of its kind at Coon Rapids High School, more plays like it nearby are likely to follow.

“Virtual theatre is a new art form that has evolved since the beginning of the pandemic when theater across the country came to a halt,” Haij said. “Because of safety concerns, it is the only way theater artists can continue to create any kind of theatrical experience for themselves and patrons.”