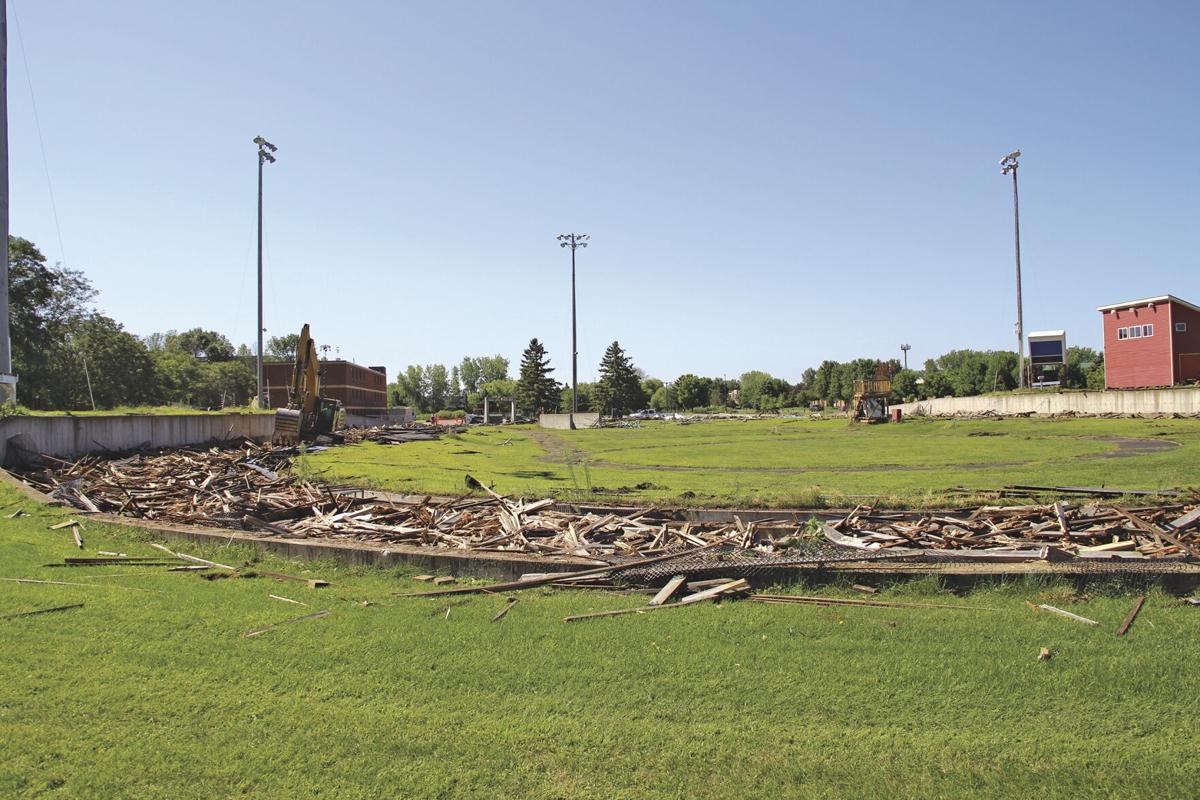 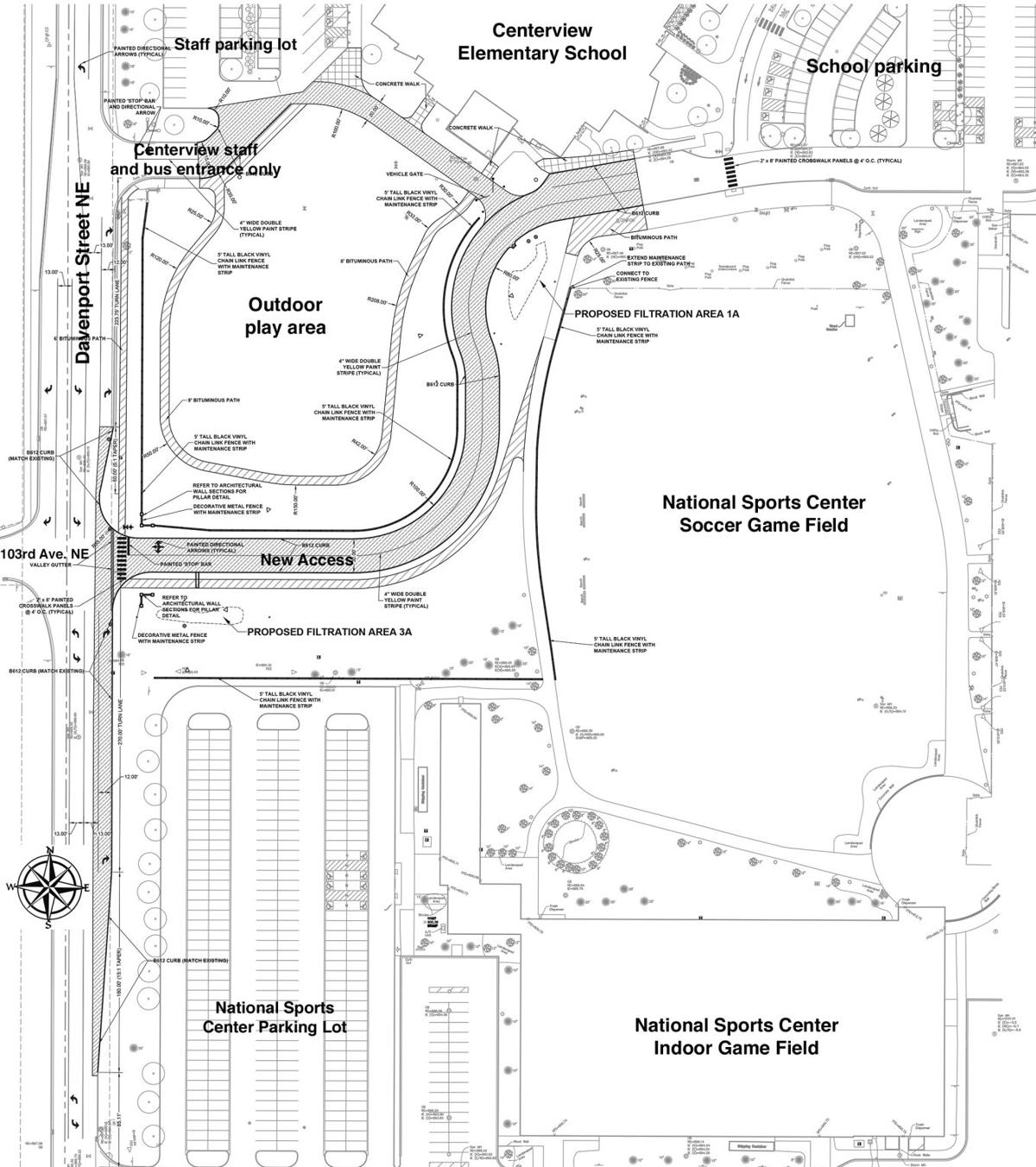 Spring Lake Park Schools is in the process of purchasing the former velodrome site to transform it into a outdoor play area and green space. (Map courtesy of the city of Blaine)

Spring Lake Park Schools is in the process of purchasing the old velodrome site in Blaine from the National Sports Center as part of a plan to construct a new outdoor play area and green space for Centerview Elementary and the general public.

The velodrome, a 250-meter wooden surface complex, was located at 1700 105th Ave. NE and was operated by the National Sports Center, a 600-acre multisport complex in Blaine.

The velodrome was originally built to host the 1990 Olympic Festival track racing events and national championships and has continued to host many high profile races over its 30 seasons. Events were held by the Minnesota Cycling Center, whose bike riders were the primary users of the facility.

The National Sports Center closed the velodrome on Aug. 29, 2019.

The Minnesota Cycling Center is looking to construct a new cycling track by 2023 at an undetermined location in the Twin Cities area for an estimated $10 million to $15 million. The organization hopes to fund 50% of the project with state money and the rest with private donations.

Spring Lake Park Schools started negotiations with the Minnesota Amateur Sports Commission at the National Sports Center earlier this year and is currently working to finalize the agreement.

The schools district presented its plans to convert the old velodrome site into an outdoor play area and green space for Centerview Elementary School at the July 20 Blaine City Council meeting.

The City Council voted 4-3 in favor of granting a conditional use permit amendment to construct a new outdoor play area and green space, a zero lot line establishing a shared driveway access between sites and 25-foot light standards in a regional recreation zoning district.

The velodrome is just south of Centerview Elementary School, which is at 10365 Davenport St. NE, Blaine. The outdoor play area will have green space and landscaping connected to the school site and will be used by the elementary school and the general public.

“The plan for the green space is still being developed and will certainly include elements for outdoor play,” Spring Lake Park Schools Superintendent Jeff Ronneberg said in an email. “We’re still working on the features and plan to include input from staff and students in the design process.”

The district plans include removing a portion of the access drive that connects Centerview Elementary School’s existing west parking lot to the parking lot of the National Sports Center.

Blaine City Planner Lori Johnson said the district instead would construct a new vehicular access from Davenport Street to align with 103rd Avenue Northeast. The access road will be constructed on the south side of the outdoor play area. Centerview Elementary School’s west parking lot, for staff and buses only, will remain the same.

“We’re most looking forward to having all of the traffic around the building rerouted so students and staff can reach green space without having to cross a street,” Ronneberg said in an email. “Additionally, creating outdoor recreation space is not only a benefit for our students and staff but the entire community.”

Johnson told the City Council that city staff was very supportive of the district’s plan, but he warned the new access drive to Davenport Street could cause problems.

“The creation of this new intersection does cause several issues with the applicant’s desire to keep what was the main Davenport Street access as a school-only parking lot access,” he said. “The converted existing driveway is too close to the proposed intersection to allow for the design or construction of standard turn lanes on Davenport Street for this access and the proposed intersection at 103rd Avenue. Staff is recommending the closure of the existing driveway based on the intersection spacing, the inability to construct standard turn lanes for both the access and the intersection and Davenport Street is designated as a State Aid route on the city’s system that handles over 10,000 vehicular trips on a normal day. Providing a street network with less than the standard roadway design criteria would not be safe or prudent to the driving public.”

City Council Member Dick Swanson asked if any traffic studies were conducted for this project.

Paul Aplikowski with Wold Architects and Engineers, which is overseeing project for the district, said a few traffic engineers conducted multiple studies on movements and projections at various points around the project site location. Results were incorporated into the designs presented to the City Council.

“I understand what you’re saying,” City Council Member Jess Robertson said to Ryan. “Again what was reiterated multiple times at our last council meeting is we’re not talking about all-day, consistent traffic contributing to this 10,000 traffic car number that you’re referring to. We’re talking about eight to 11 buses, twice a day for a time frame of about 15-20 minutes.”

Robertson also said it’s an issue of safety and efficiency of pickup and drop-offs for students.

City Council Member Julie Jeppson made a motion not accept staff’s recommendation to close the southern access point on the southern end of the velodrome’s parking lot.

Jeppson said she hasn’t received any complaints about heavy traffic on Davenport Street. “To me it’s about 175 to 100 feet that we’re talking about and the (National Sports Center) traffic flowing in and out of there in my opinion is not going to be elaborate,” she said.

The City Council voted 4-3 in favor of Jeppson’s amendment and approved the overall project 4-3, with Ryan, Swanson and Council Member Wes Hovland dissenting.