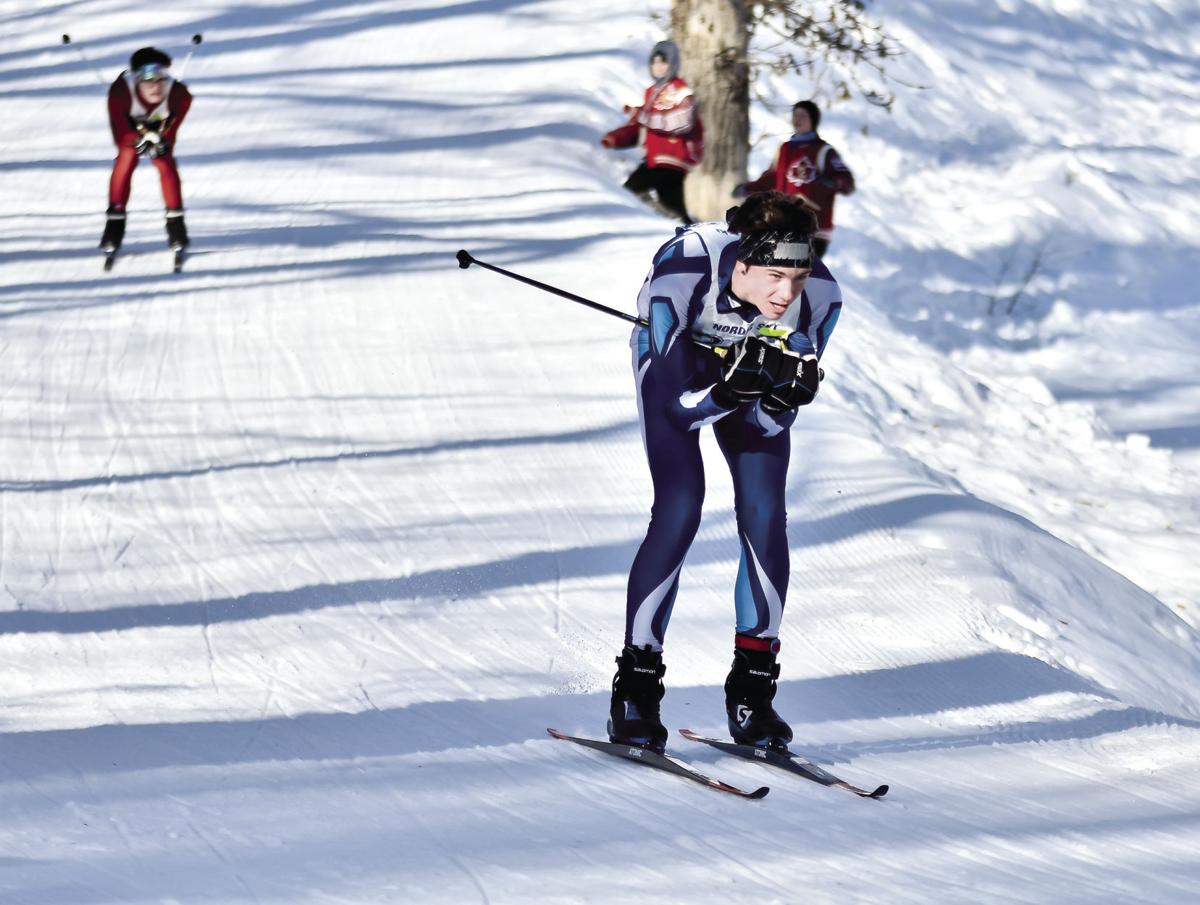 Blaine freshman Ben Lewis keeps pace near the front before the second to last turn Feb. 5 in the 5A section meet at Theodore Wirth Park. Lewis finished ninth overall in 25 minutes, 55.6 seconds and advanced to state as an individual. 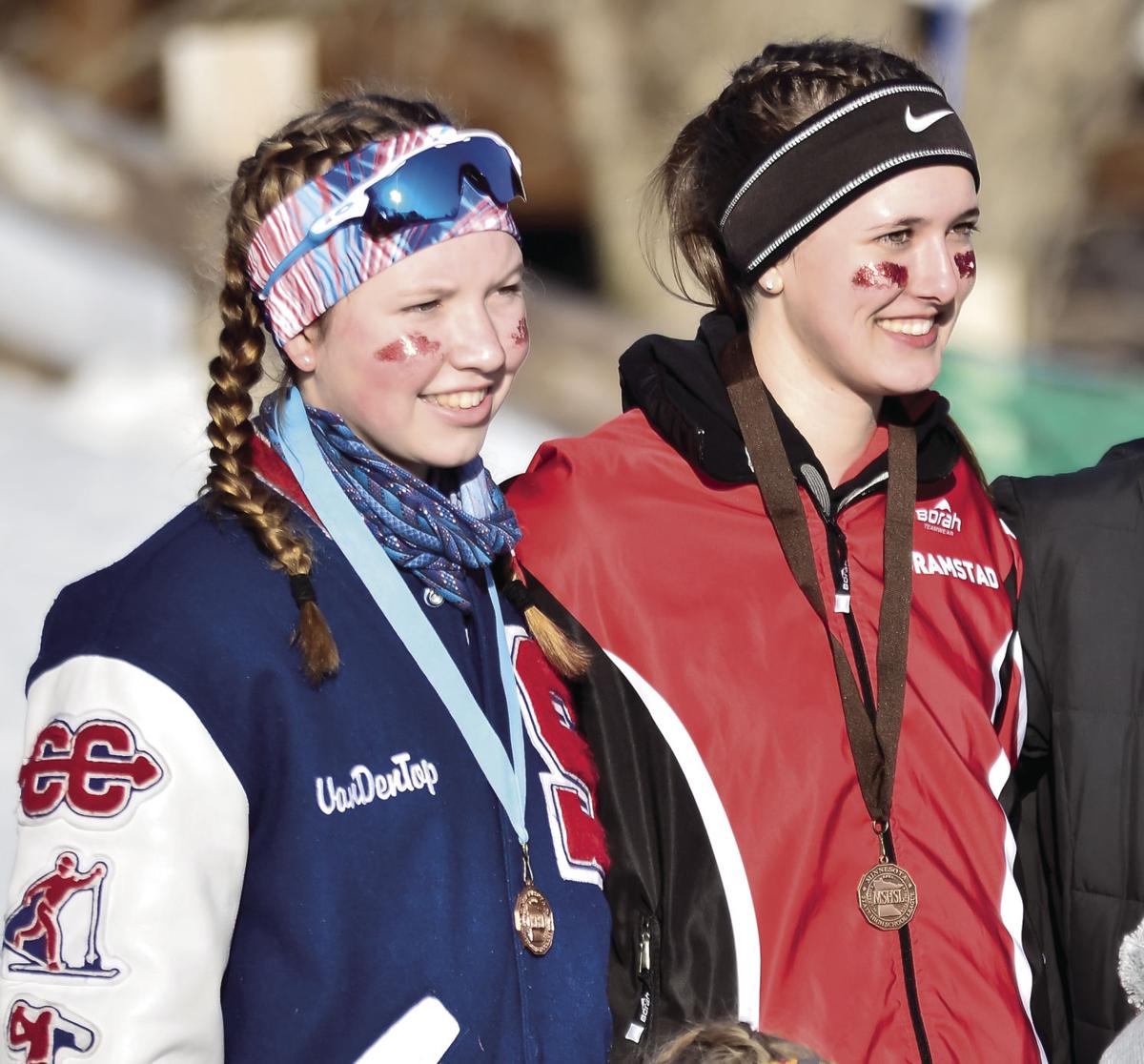 Blaine freshman Ben Lewis keeps pace near the front before the second to last turn Feb. 5 in the 5A section meet at Theodore Wirth Park. Lewis finished ninth overall in 25 minutes, 55.6 seconds and advanced to state as an individual.

In a pressure-packed race against a slate of exceptionally talented, and tested, skiers at the Section 5A Championships at Theodore Wirth Park Feb. 5, Blaine freshman Ben Lewis proved his mettle, closing fast en route to a ninth-place finish and a spot at state.

“It’s certainly not easy to be a freshman and qualify for the state meet,” Blaine head coach Andy Schwen said. “He was up against some great skiers. He put in a lot of hard work over the summer. He came into the season with state as a goal and I think he was set on showing us all that it was a reasonable goal for him.

“He is a driven competitor in wanting to improve and be the best he can be. He’s one of those kids that gets what kind of hard work it really takes to make something like this happen.”

Lewis began the day in 13th after a split of 14:04.7 in the classic leg of the race, right on the edge of state contention for the top six individuals not on a state-qualifying team.

In the afternoon skate, Lewis left no doubt he would advance, posting a scorching split of 11:51.6 that was the fifth best overall to climb four spots and lock up a state bid.

“I was very happy with how my section race went! I really couldn’t have asked for much more,” Lewis said. “Going into the section race and even the season, I was hoping to make state. I knew that if I could have a decent classic race, then I would be able to make up the last bit of time in the skate race. When I was crossing the finish line I immediately smiled and I was very happy and relieved. Honestly, I was so happy I don’t remember every detail, but the best part was being able to enjoy it with all of my friends.”

“I thought his races for the day went great,” Schwen said. “He had himself in a great position after the classic race and he’s a great freestyle skier so he finished the deal, passing enough kids to get him into the individual qualifier positions. … It meant a lot for me to be able to see him qualify. He’s a great kid that cares about others, works hard in school and works hard with his team. It’ll be fun to see how he develops over the next few years!”

Forecasted cold weather pushed the state meet back a day to Feb. 14 at Giants Ridge in Biwabik.

The SLP/St. Anthony girls just missed on advancing as a team, finishing in third place by a single point behind runner-up Elk River/Zimmerman. Samantha Solboe finished in 15th overall, Claire VanDenTop placed 18th and Kirsten King took 20th, with Brynn Bossen, Kaitlyn Finnegan and Signe Johnson all finishing in the top 50 as well.

The Blaine girls earned ninth as a team, led by Kelsey Huver in 33rd, Janessa Bennett in 39th and Natalie Bennett in 45th.