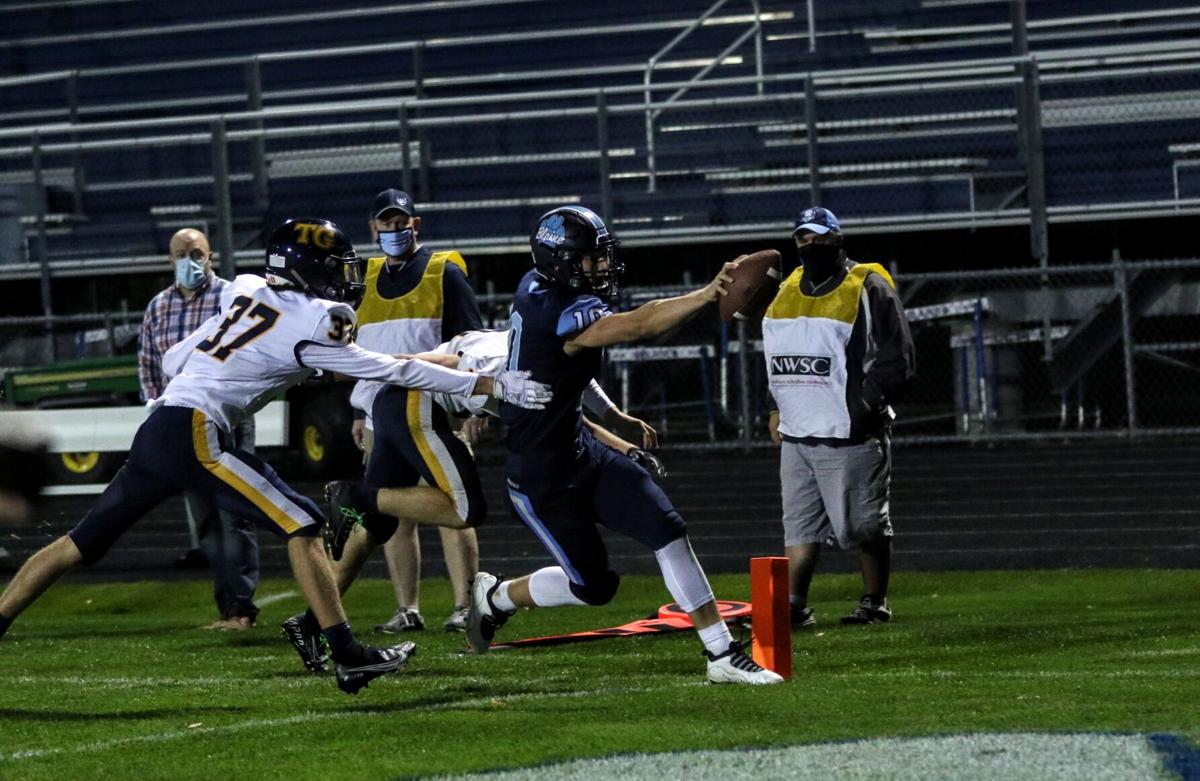 Blaine quarterback Tyler Schuster reaches the ball over the goal line for one of two third-quarter rushing touchdowns during the Bengals’ season-opening 26-22 win over Totino-Grace Oct. 9. The game marked the return of high school football, which had originally been postponed until March. 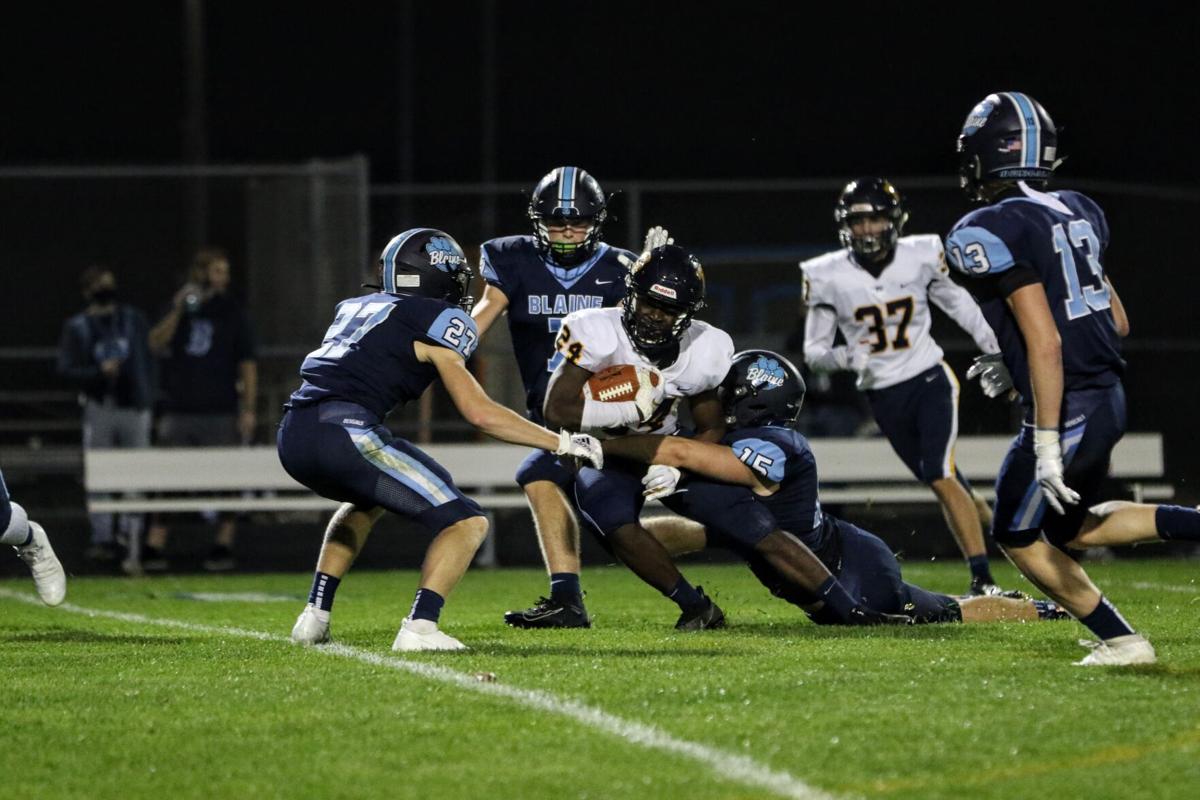 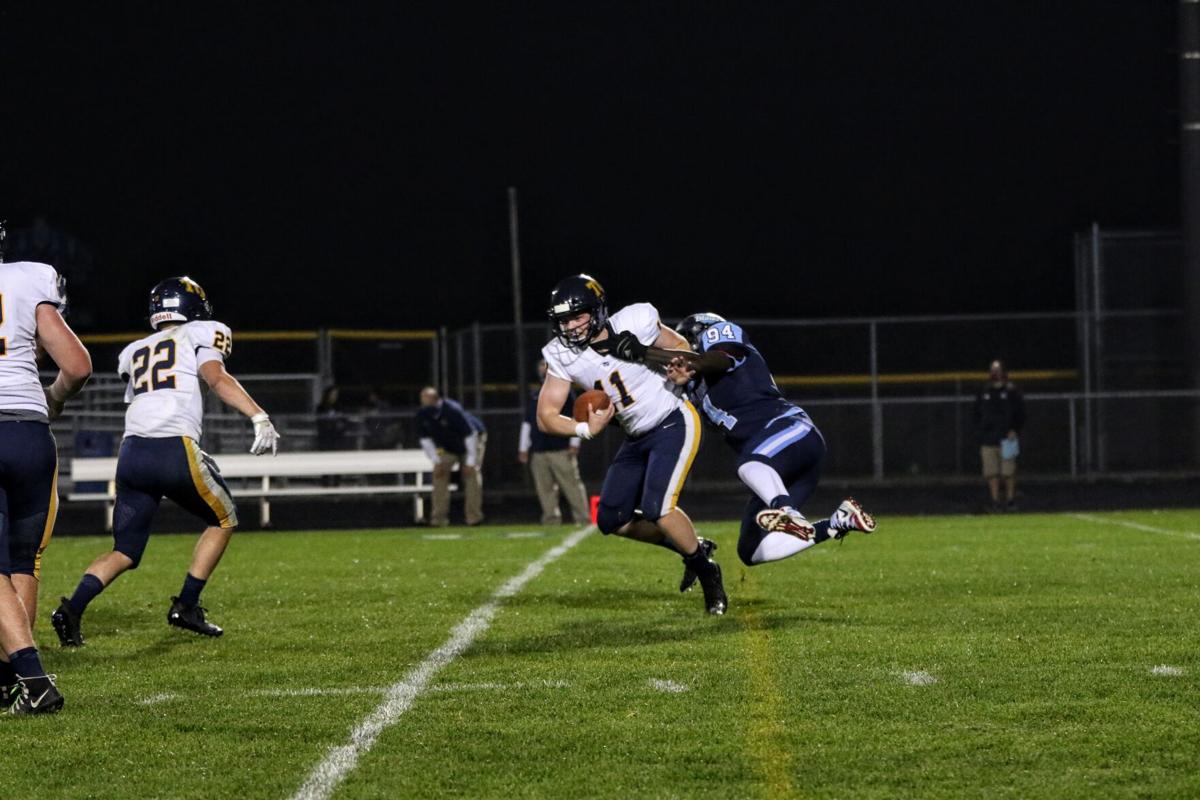 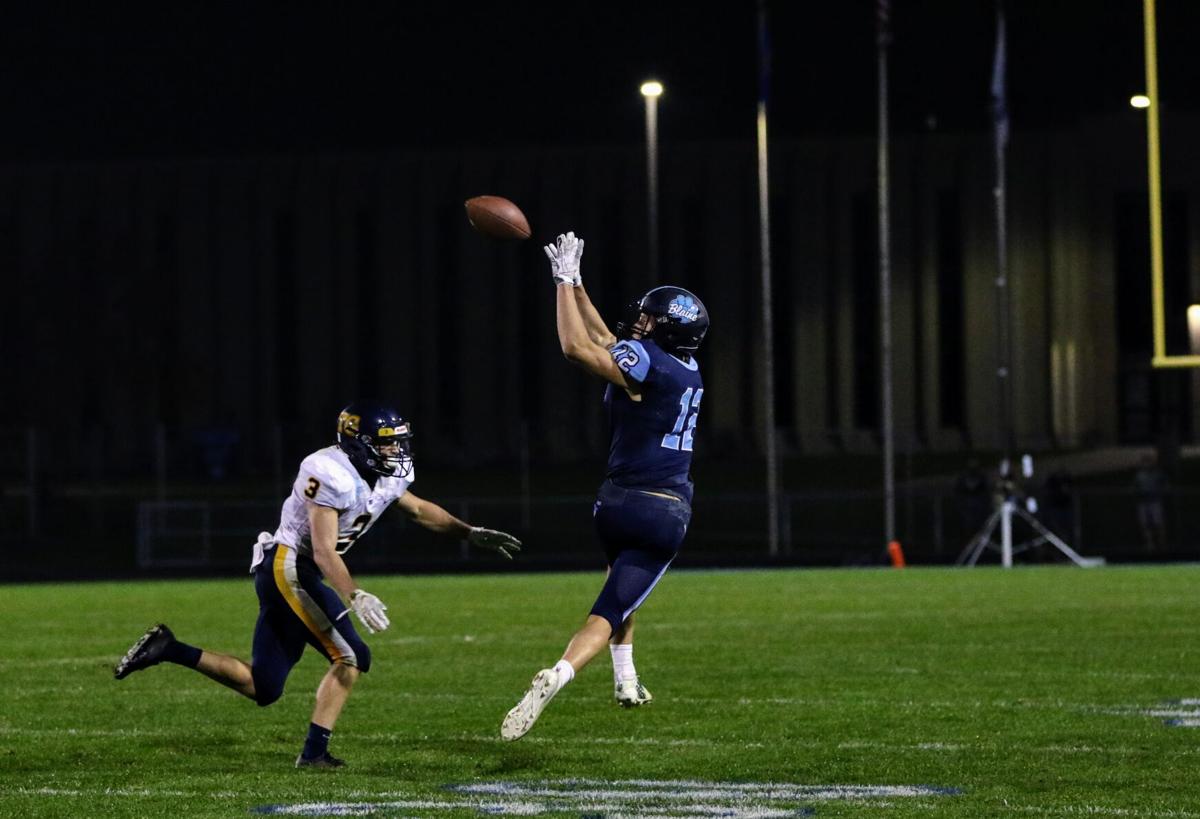 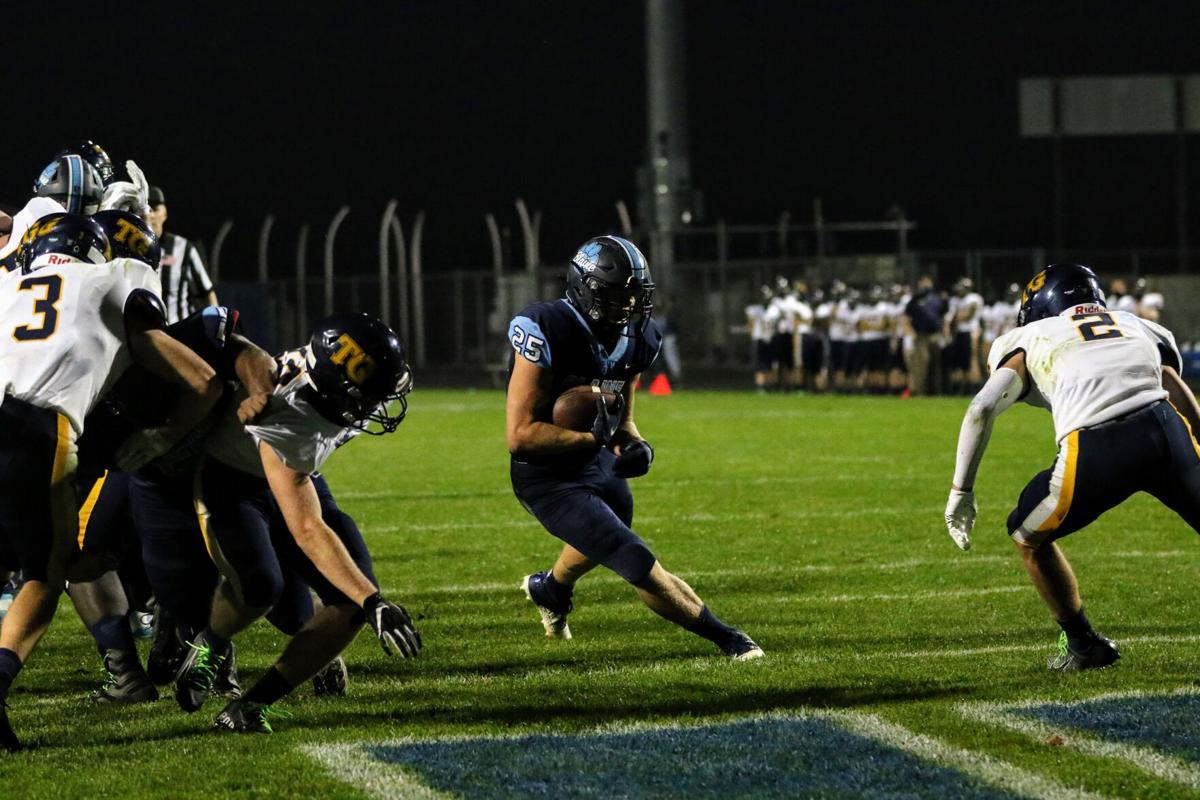 Blaine quarterback Tyler Schuster reaches the ball over the goal line for one of two third-quarter rushing touchdowns during the Bengals’ season-opening 26-22 win over Totino-Grace Oct. 9. The game marked the return of high school football, which had originally been postponed until March.

It was a perfect night for a late yet new beginning.

A beautiful fall night that normally would be near the end of the regular season instead marked the beginning of 2020 high school football Oct. 9. After a whirlwind stretch in which the football season was initially postponed to March, then moved back to the end of fall finally led to action back on the field, highlighted by Blaine winning a back-and-forth thriller 26-22 over visiting Totino-Grace to kick off the season.

“I was extremely happy for our kids and coaches to be able to play a game,” Blaine head coach Mike Law said. “Both groups spend a ton of time and make sacrifices to attend events and be at practices, all in the hopes of being able to play on Friday nights. With so much uncertainty, it was great to have an opportunity to run on the field with that group.”

The game began as a defensive clash, with neither team breaking through in the opening quarter. The Eagles struck first three minutes into the second quarter, taking a 7-0 lead following a 1-yard Kristoff Kowalkowski rush. Totino-Grace nearly carried that lead into the half, but the Bengals found the end zone in the final minute before the break on a 1-yard rush by Josh Schlangen, pulling within 7-6 and gaining some momentum.

“The first touchdown of any season is really important,” Law said. “We had been effective in moving the ball, but had not been able to get it in the endzone. Having some points going into the half allowed our kids to relax and it resulted in better execution in the second half.”

Blaine took a 12-7 lead early in the third quarter on a 53-yard scamper by Tyler Schuster, but Totino-Grace answered on a 2-yard run by Hunter Karlson and a two-point conversion to regain the lead at 15-12.

The seesaw contest swung back toward Blaine in the final minute of the third as Schuster broke free again, this time from 19 yards out to give the Bengals a 19-15 edge heading into the fourth.

Totino-Grace bounced back once again early in the fourth, moving in front 22-19 following a 12-yard scoring strike from Kowalkowski to RJ Spencer, but another 1-yard scoring rush by Schlangen with five minutes to play put the Bengals ahead one last time, and for good.

“We knew we had a resilient group of young men,” Law said. “They are an extremely close group and never wavered throughout the game. Even when we were down it never felt like we were panicked. Really proud of the kids for having that mental fortitude and to continue to make plays late in the game.

“I was really happy with the effort and energy that our kids played with. We have a great group of leaders that hold each other to high standards. There is a ton of room to improve and clean up miscues that come with it being the first game of the season.”

Schlangen closed the night with 159 yards rushing, while Schuster posted 143 yards through the air and 114 on the ground. Defensively, Cody Foster tallied 13 tackles, Cole Bruley had 10 tackles and a sack, Jordyn Greseth had eight tackles and a forced fumble and Jack Clark had an interception.

Also around the area Oct. 9:

Fridley shut out last year’s Class 4A runner-up St. Paul Academy/Minnehaha Academy/Blake 14-0 at home to kick off the season.

Following a scoreless opening quarter, the Tigers broke through on a 9-yard scoring keeper by Tra’Vione Stevenson midway through the second.

The Tigers doubled their advantage to 14-0 late in the third quarter on a 5-yard completion from Stevenson to Zach Gotsch, with the Tiger defense continuing to shut down SMB the rest of the way.

Becker held off host Spring Lake Park 20-13 in a game that went down to the wire.

Becker led 8-0 after the first quarter before the Panthers scored their first touchdown of the year on a 1-yard carry by Henry Dennis, closing within 8-7.

The Bulldogs came up with a score in the closing minute before halftime to extend their lead to 14-7, maintaining the margin until the fourth quarter when Aaron Clausen scored on a 1-yard run. The extra point was unsuccessful, leaving Becker ahead at 14-13. The Bulldogs scored again with three minutes remaining to extend their lead back to a touchdown at 20-13, then were able to hold off SLP down the stretch to take the opening night win.

Joey Sorenson collected 13 total tackles and Nolan Tuomi and Jackson Smith each intercepted a pass for the SLP defense.

Southwest built a 15-0 lead in the first quarter, before the Hylander defense produced a safety just over a minute into the second quarter to cut the gap to 15-2. That score remained until the fourth quarter, when Southwest added a pair of scores to put the game out of reach.