The Blaine City Council approved a TIF request May 3 for a planned three-building industrial campus, known as Blaine 35, that is planned for the northwestern quadrant of the interchange of Interstate 35W and County Road J (85th Avenue NE). The project is estimated to cost $35 million. (Rendering courtesy of the city of Blaine) 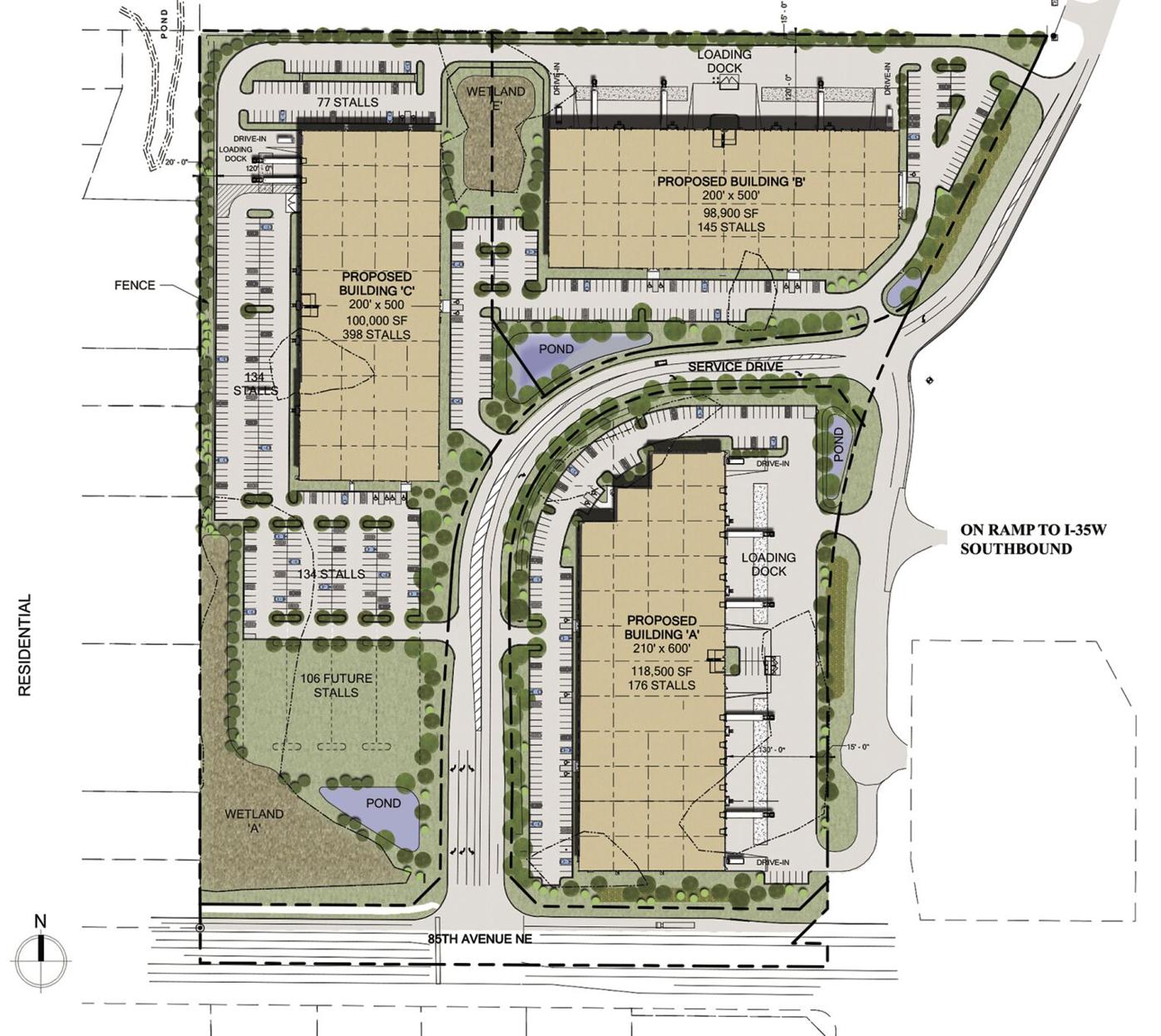 The Blaine City Council approved approximately $2.7 million in tax increment financing May 3 for the development of an industrial campus called Blaine 35, which will consist of three buildings.

Artis REIT is working to bring the Class A Industrial Blaine 35 campus to southern Blaine on undeveloped land northwest of the interchange at Interstate 35W and County Road J (85th Avenue NE).

Artis REIT used other high-quality business parks in the community as models for what it wants to do, according to Erik Thorvig, Blaine’s community development director.

Thorvig said the amount of jobs this campus would create is unknown given that the nature of the use of the spaces is speculative, but he suspects the use would be office space, manufacturing or warehouse.

But Thorvig said it’s estimated the space will generate 225 to 260 jobs for phase 1, which includes the first building, and the number of jobs that could be created in phase 2 will be announced at a later date. Phase 2 includes the second and third buildings.

In addition, the project will create an estimated $23 million in taxable value.

According to its website, Artis REIT, based in Winnipeg, Manitoba, is an unincorporated closed-end real estate investment trust primarily focused on creating value for unit-holders through the investment in and ownership of commercial properties in select markets.

Artis REIT owns and internally manages approximately 3.8 million square feet of industrial properties throughout the Twin Cities metro with an occupancy of 98%.

The three buildings will have a mix of high-quality materials with windows and modern canopies to provide visual interest on the large buildings, Thorvig said.

A fence and landscaping will be installed adjacent to the existing single-family homes on the western property line.

The Blaine 35 project will be done in two phases due to some challenges on the northern part of the property related to some plant species, Thorvig said.

In total the Blaine 35 project is estimated to cost $35 million. Thorvig said the developer identified at funding gap of $3.3 million, which is why it’s requesting TIF funds. A TIF district will allow the developer to receive a portion of the property taxes generated by the site improvements it makes. The developer can use those funds to pay for qualifying expenses.

“[This TIF plan] is structured as pay-as-you-go, meaning that the developer will receive annual increment payments based on their performance, so if they do not build the highest of quality of buildings and the values are less, they may not acquire or receive all of the proposed TIF that’s outlined in the plan,” Thorvig said. “In addition, there are some job requirements that they need to meet that are in the EDA (Economic Development Authority) action item in the development agreement, where if they don’t meet those they will not get their TIF payments or in some instances would have to repay TIF payments, so it’s very much structured on the performance of the developer.”

Thorvig said two TIF districts are being proposed for the project because it is built in two phases. The first phase of the project is expected to generate a little over $1 million in additional tax revenue, which will be captured as “increment.” The first district will be in place from 2022 to 2031.

The second phase of the project will generate approximately $1.6 million in increment. The second district will be in place from 2023 to 2032.

Thorvig said the second district will not be certified until the developer is ready to move on with phase 2.

Although the developer is receiving about $2.7 million in assistance from the TIF plan, the money will not come out of existing tax revenues, and the end result will be more property taxes in the city’s coffers, Thorvig explained.

The City Council voted on the two TIF districts for the project separately. The council approved each district in a 3-2 vote, with Council Members Jess Robertson and Chris Massoglia dissenting.

Robertson said she was a big fan of the project but “wasn’t a fan of the funding mechanism to offset just ridiculous state and other entity fees that came into play with the challenges with the property.”

“So I’m a big fan of the project, but I’m going to be voting no for those reasons so I just wanted to be clear,” she said.

Massoglia said he’d vote no for the same reasons.