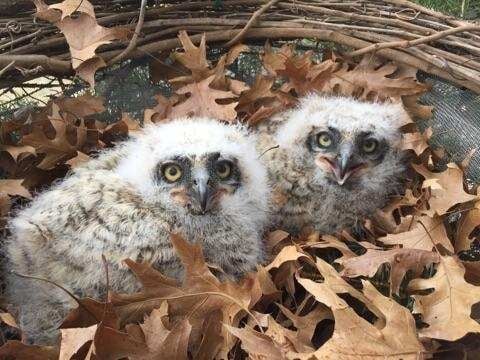 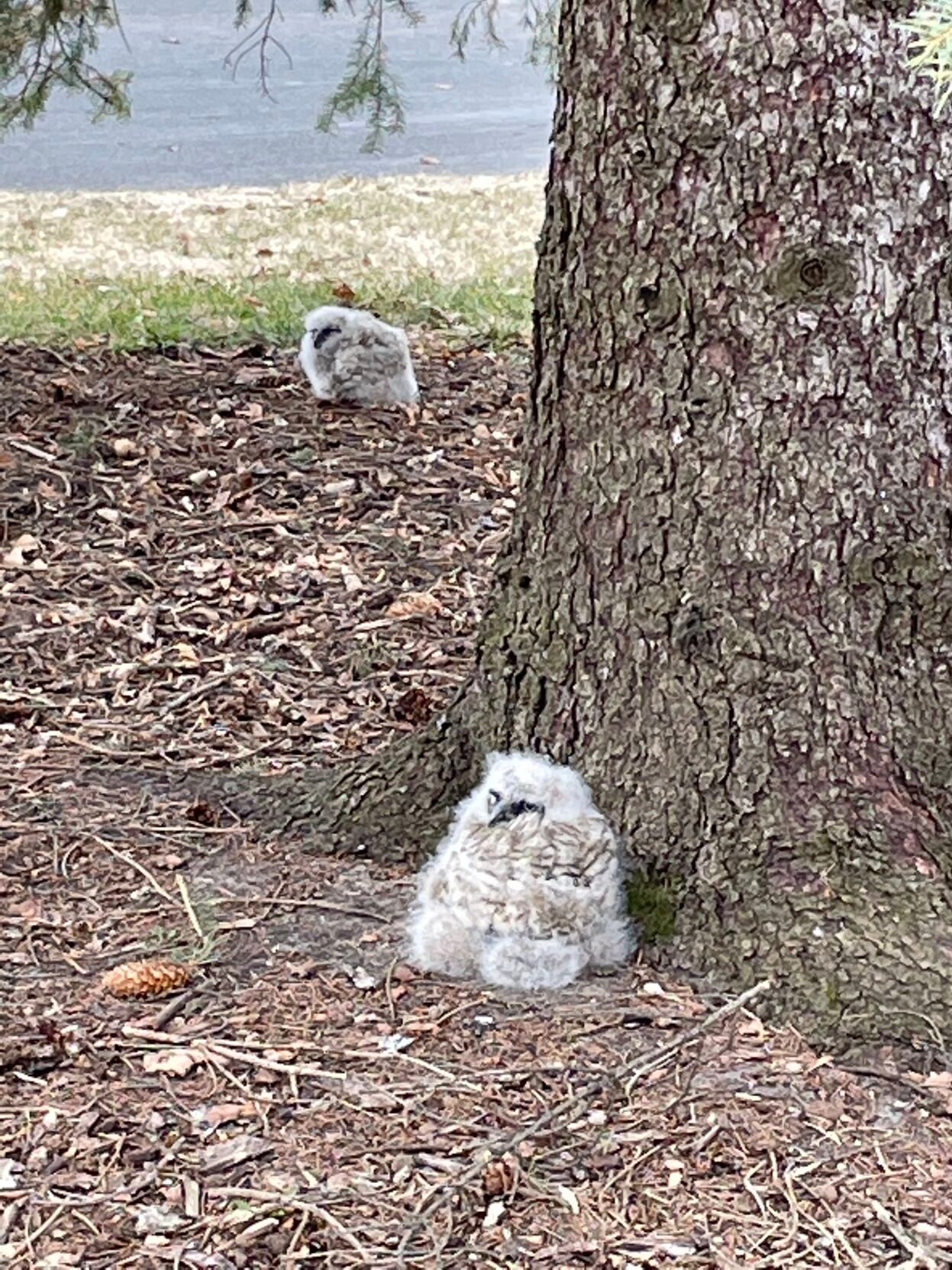 Two great horned owlets sit on the ground beneath a tree in Phil and Susie Leonard’s yard in Anoka March 21. Volunteers from the Raptor Center helped rescue them and place them in a new nest. (Photo submitted) 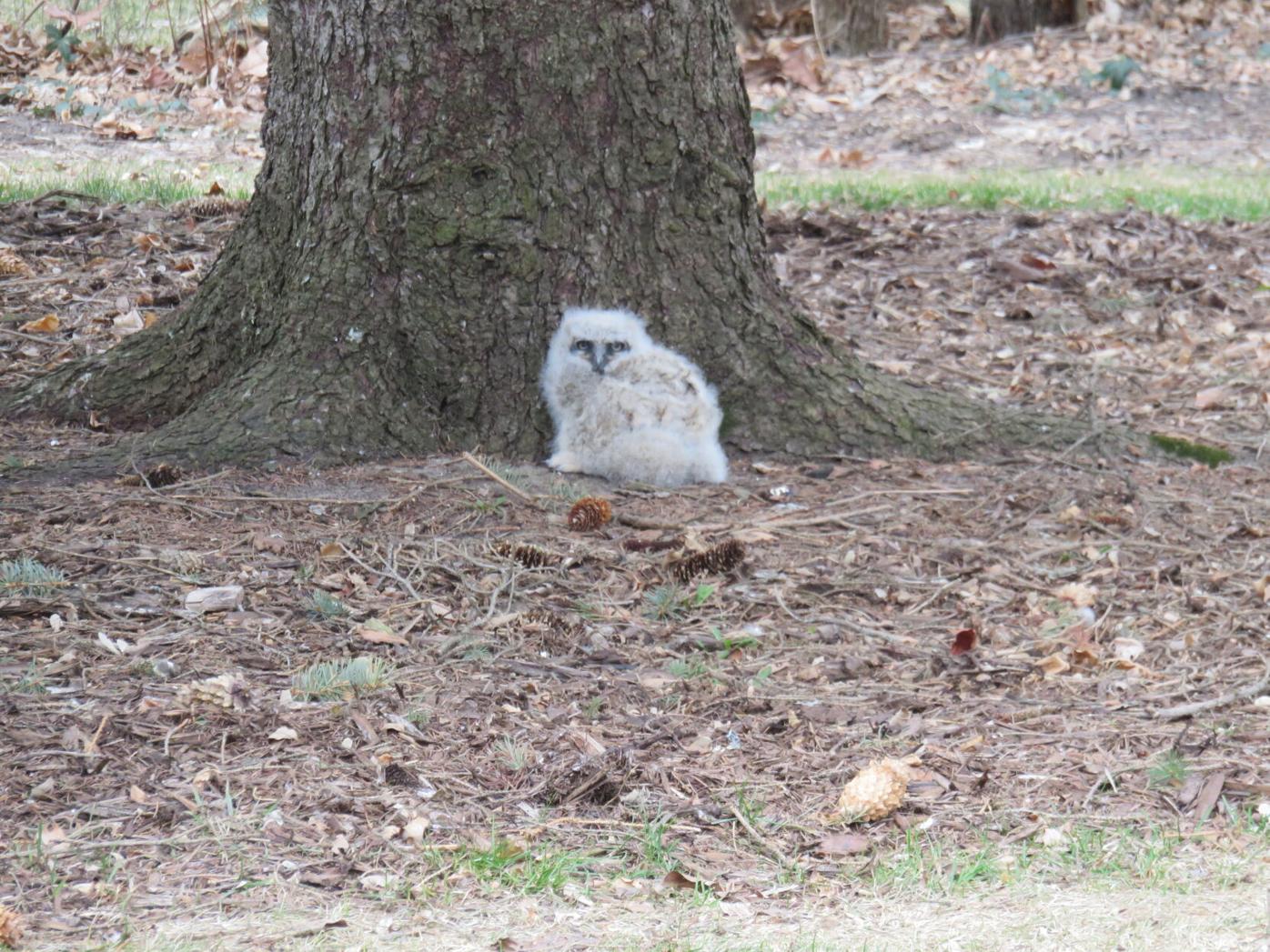 The larger of two owlets found March 21 by Phil and Susie Leonard is either named Sarah or Jabba — depending on who you ask. (Photo submitted) 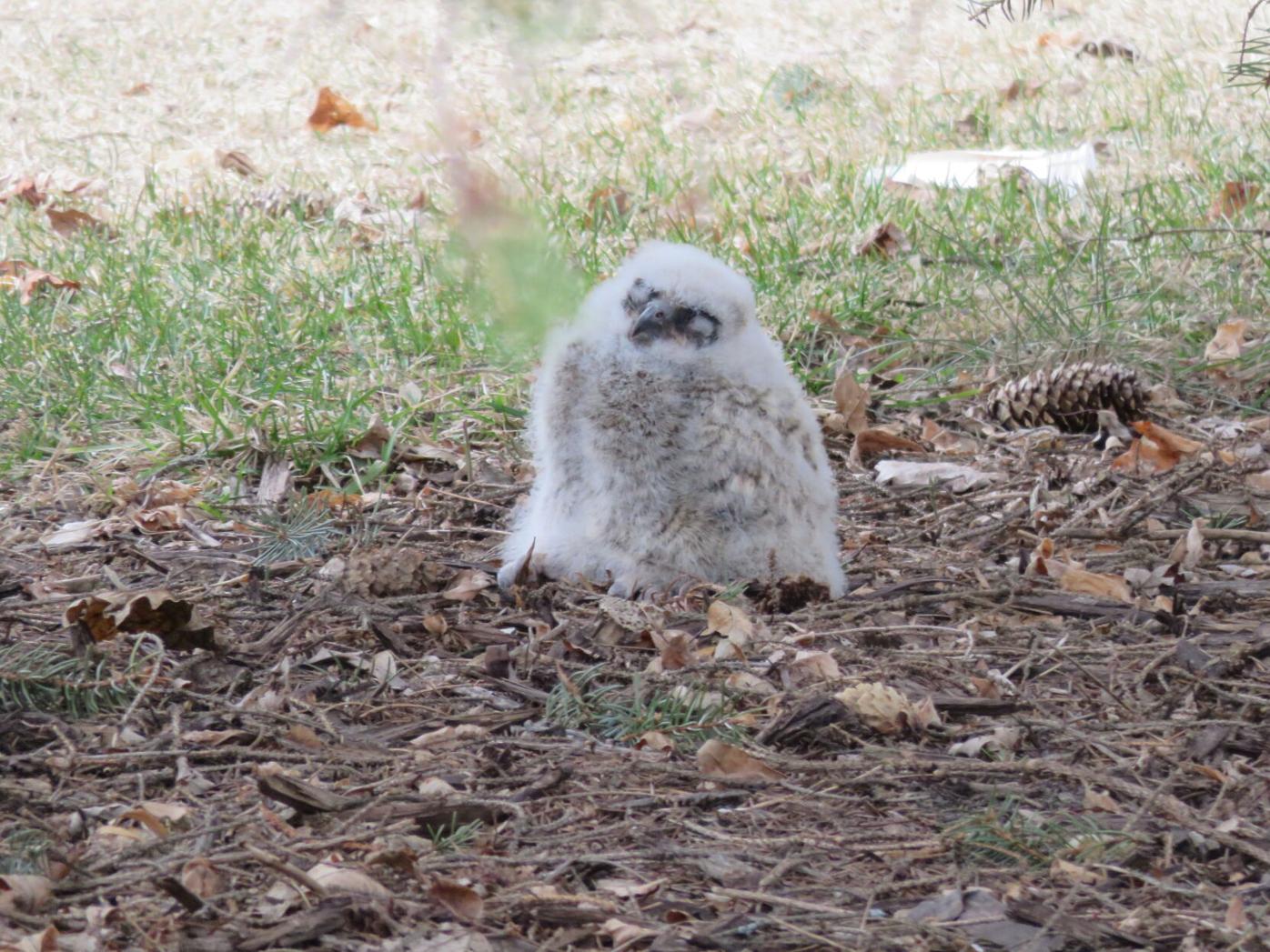 The smaller of two owlets found in Phil and Susie Leonard’s yard March 21 is named Percy by Susie and Baby Yoda by the neighbors. (Photo submitted) 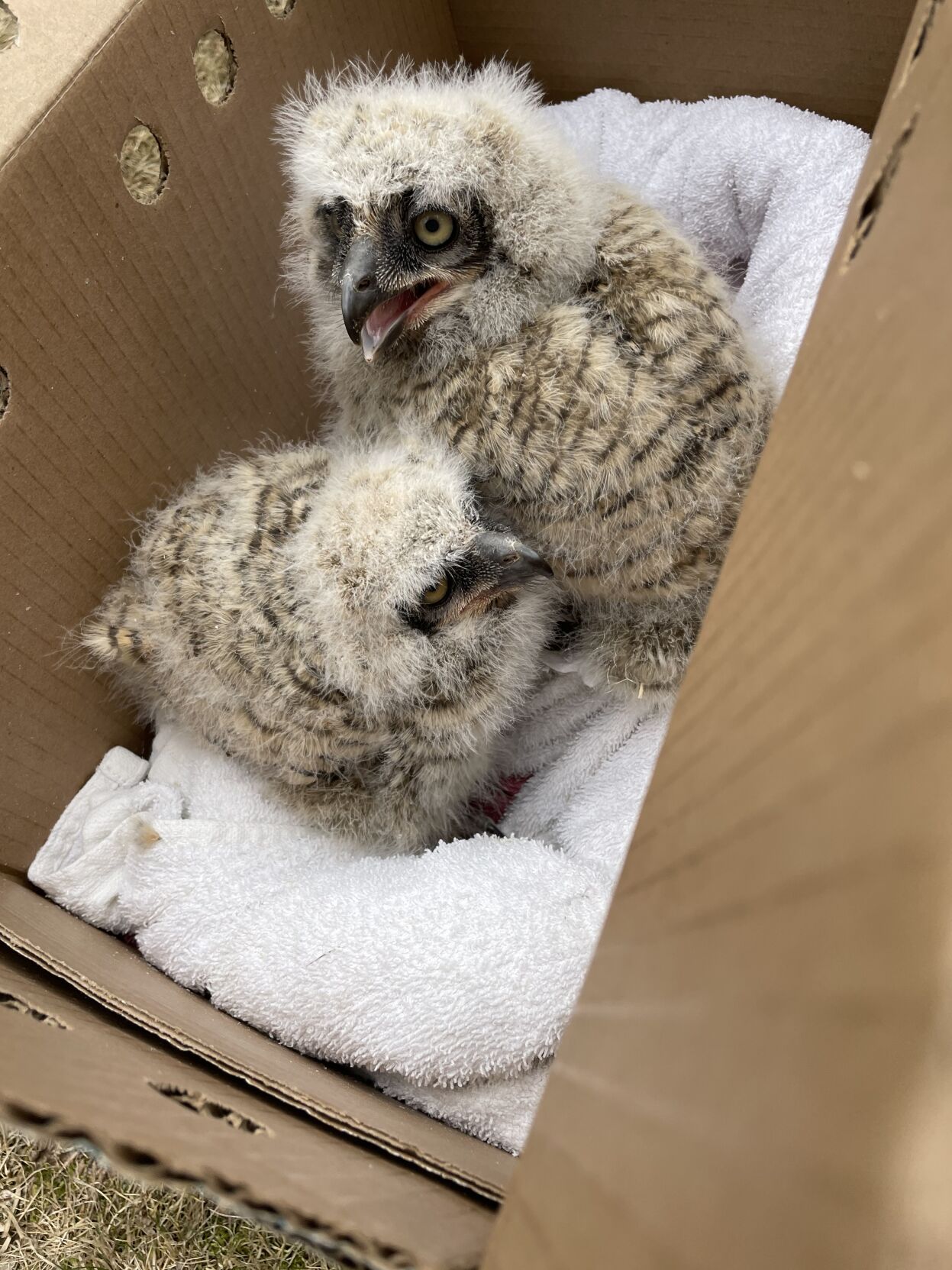 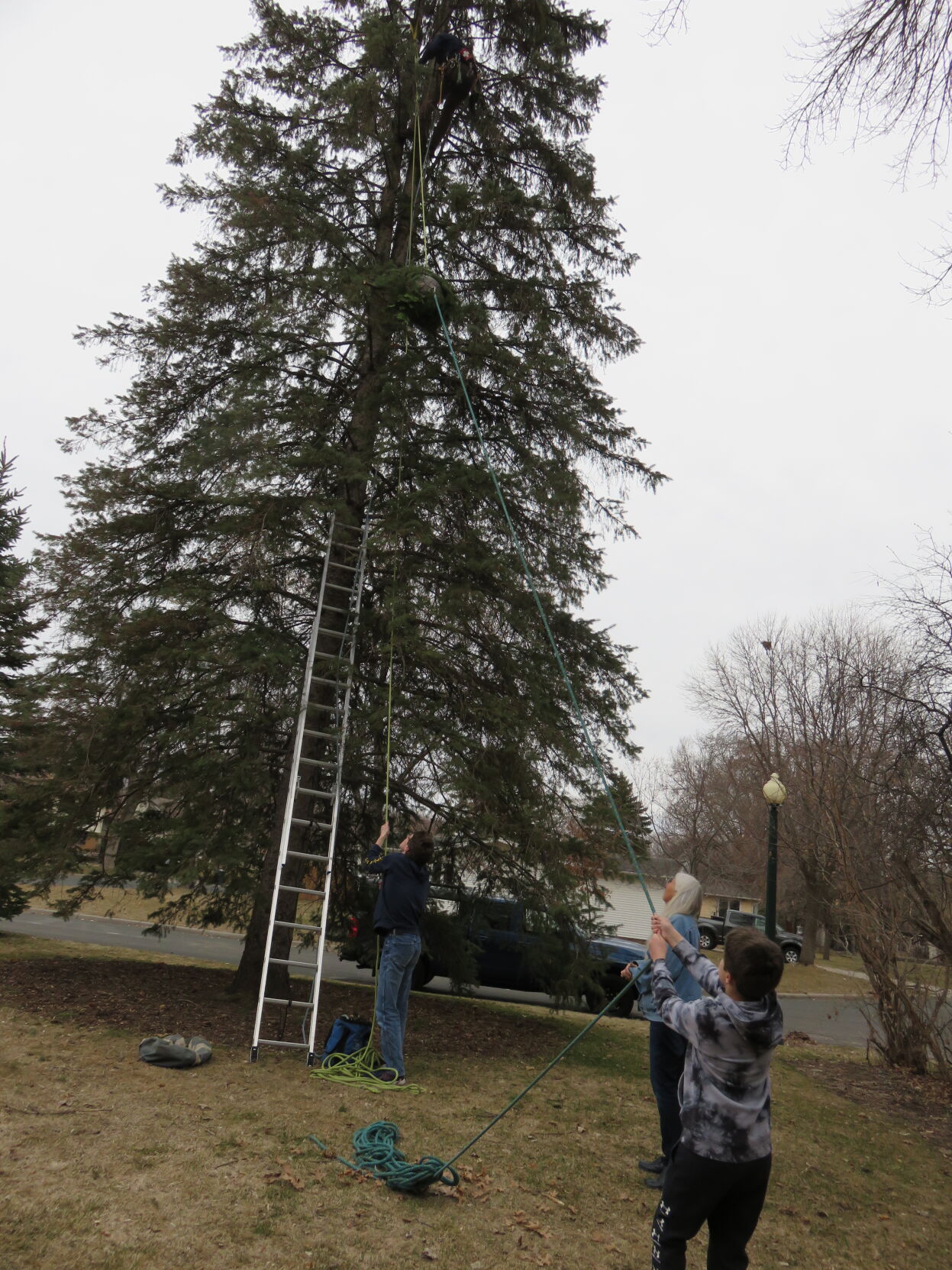 Mark Leonard, left, and William Lee, right, help raise a nest from the Raptor Center into a tree in the Leonards’ Anoka yard March 22. (Photo submitted) 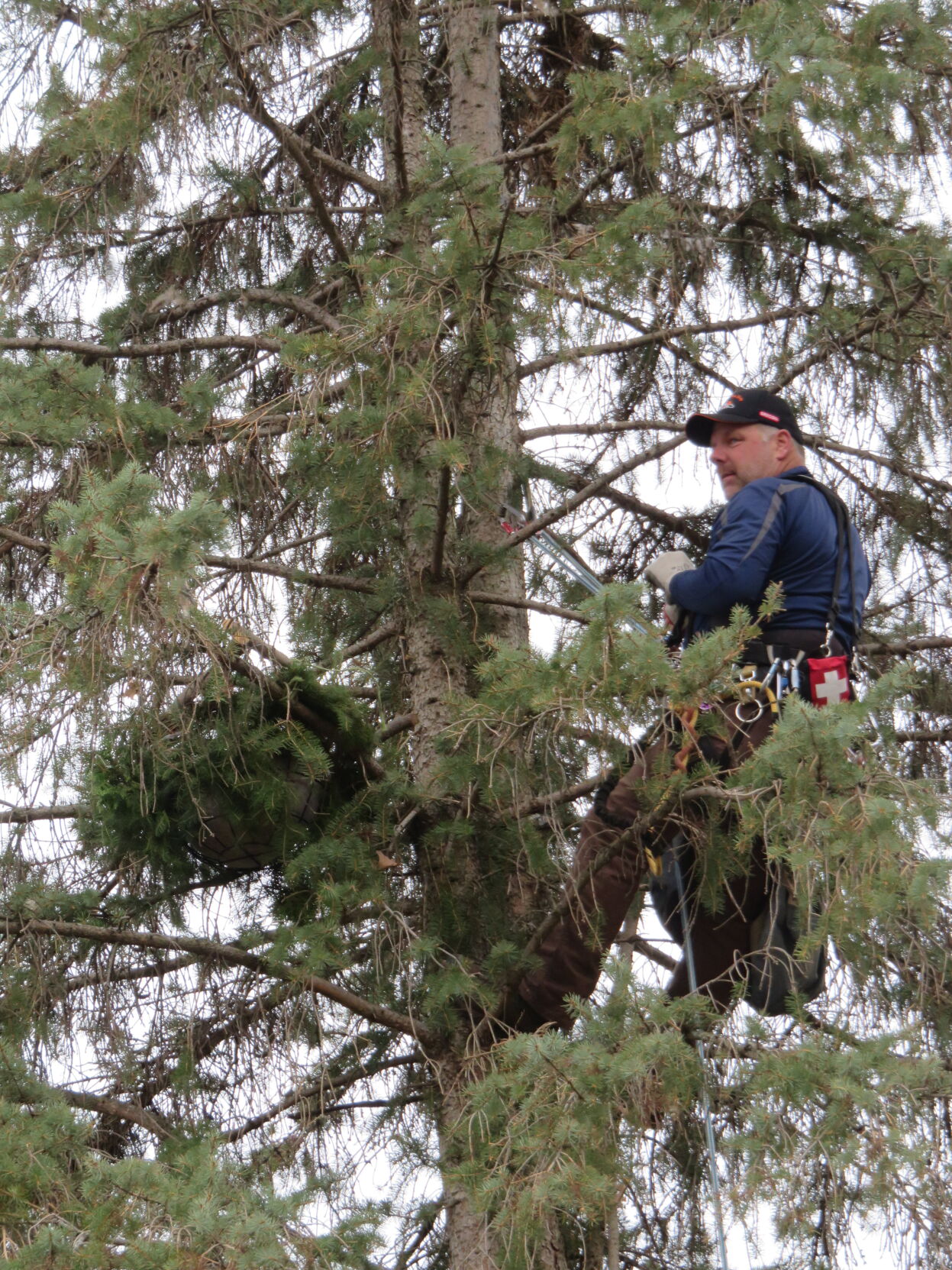 A volunteer with the Raptor Center is pictured in a tree where he placed a new nest for two owlets in Anoka March 22. (Photo submitted) 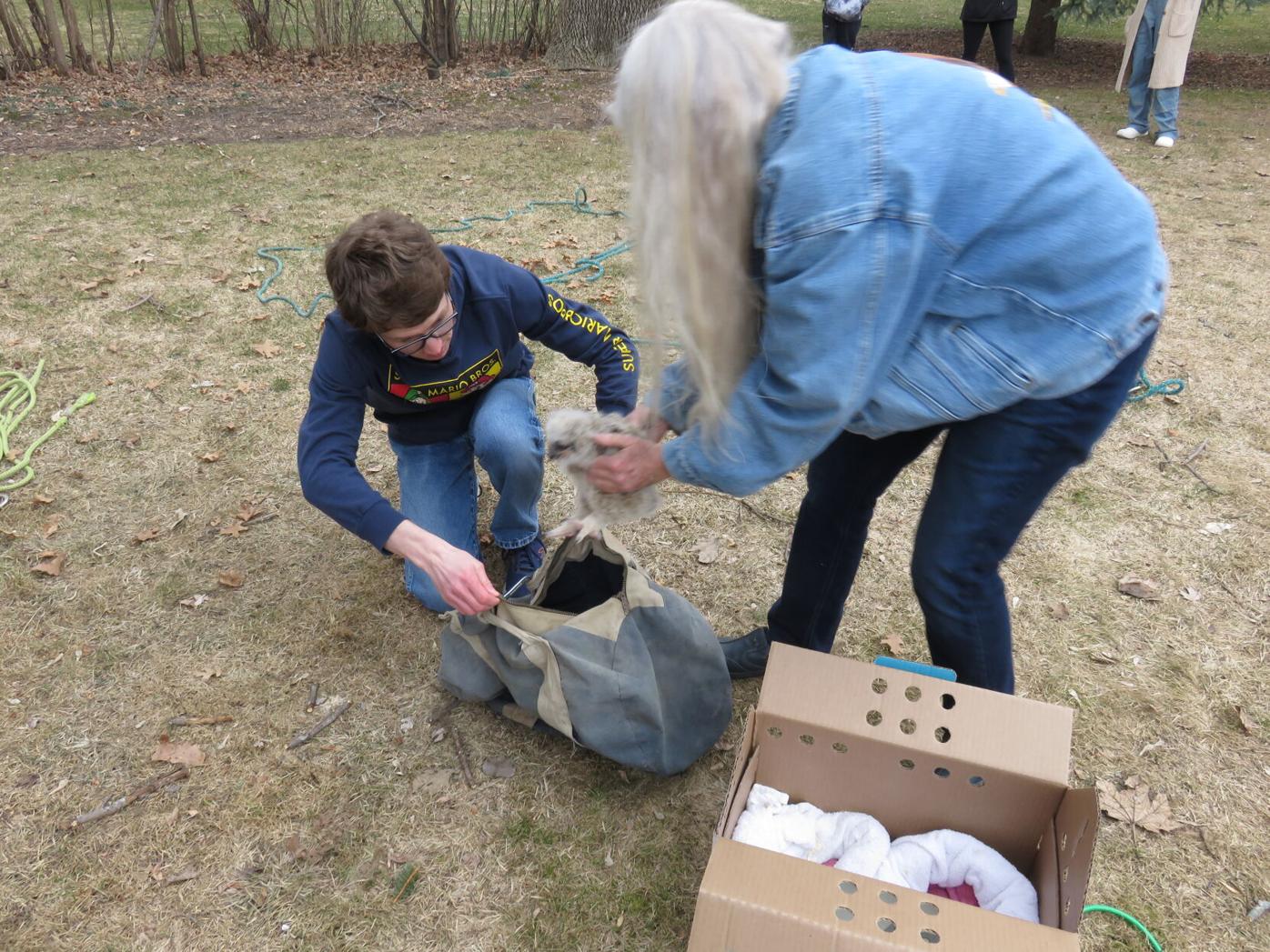 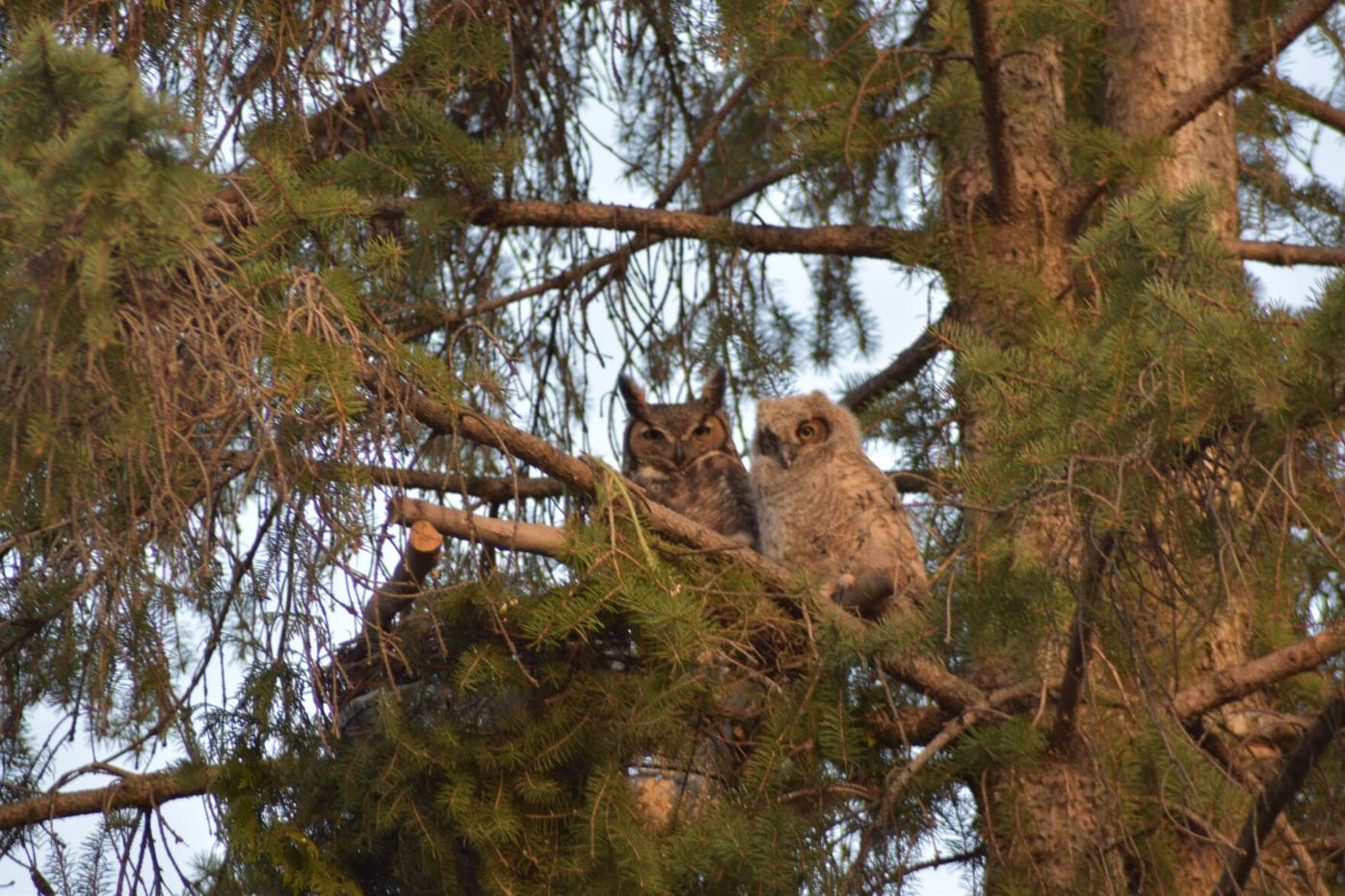 A mother great horned owl sits with the larger of two Anoka owlets about a week after their March 21 rescue by the Raptor Center. (Photo by William Lee) 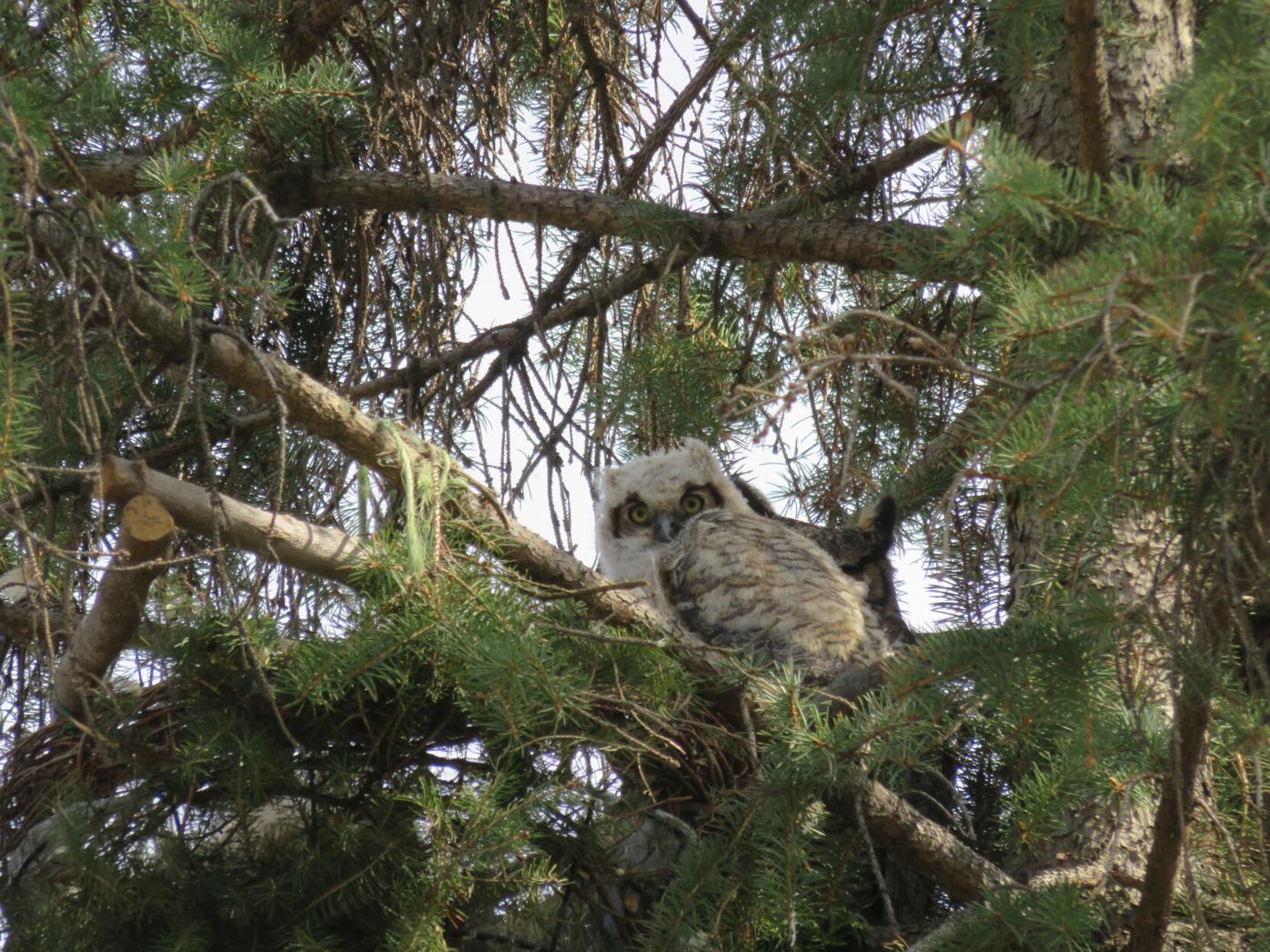 One of the rescued owlets sits in its tree with a parent April 4, at roughly 6 weeks old. (Photo submitted)

The larger of two owlets found March 21 by Phil and Susie Leonard is either named Sarah or Jabba — depending on who you ask. (Photo submitted)

The smaller of two owlets found in Phil and Susie Leonard’s yard March 21 is named Percy by Susie and Baby Yoda by the neighbors. (Photo submitted)

A volunteer with the Raptor Center is pictured in a tree where he placed a new nest for two owlets in Anoka March 22. (Photo submitted)

One of the rescued owlets sits in its tree with a parent April 4, at roughly 6 weeks old. (Photo submitted)

But as Susie Leonard looked closer, she discovered the white fluffy ball at the base of a pine tree was an owlet. Not far away sat another.

Susie and her husband, Phil, had known owls lived nearby, but until that Sunday in March they had no idea a family of great horned owls nested in their yard near Birch Street and River Lane in Anoka.

“We’ve heard them all around the neighborhood, and we don’t have quite as many bunnies as we did,” Susie said.

When they found the owlets March 21, the Leonards were just returning from out of town and weren’t sure how long the birds had been on the ground, but they didn’t appear injured.

Soon the neighbors noticed what was happening and gathered around the discovery. Someone picked up the owlets and put them in a box.

The Leonards’ son, Mark, called Springbrook Nature Center, which referred him to the University of Minnesota’s Raptor Center. Terry Headley, a Raptor Center volunteer, came out the same day to pick up the baby birds, which she estimated were 4 weeks old.

“She said if you can get them back within 48 hours, then the parents will continue to care for them,” Susie said.

The owlets were among the first babies rescued by the center this season — the first was another great horned owl found on the ground in Coon Rapids earlier the same day.

The next day Headley returned to the Leonards’ house with a professional tree climber and a homemade nest to replace original, damaged nest.

The climber leaned a 40-foot extension ladder against the tree, and then climbed even higher with the help of climbing gear, according to Phil Leonard. Neighborhood children raised the new nest to the climber using a pulley system.

With the nest situated, the owlets were hoisted in a duffel bag and placed in the nest.

“They did an outstanding job,” said neighbor Jeff Lee, who can see the nest from his window. “They knew exactly what was going to happen. They said as long as we put them back up there in a day or 48 hours the mom should return. We were nervous, because we were like, what if she doesn’t?”

All they could do was wait and see — and then celebrate early the next morning when they could see the mother had come back.

“When we saw her in there, we were giving high-fives,” Lee said.

In the weeks since the rescue, the family of owls has brought the neighborhood together.

“We’ve been out there every night with the neighbors,” Lee said.

“People will stop on the street now,” Susie Leonard said. “We’ve stopped people on the street and asked, do you want to see our owls?”

“We go out there at least once a day to see if we can see the parents and/or the babies, and we’ve watched them grow,” Phil Leonard said.

But there’s one area where the neighbors have a friendly disagreement: the owls’ names.

Susie Leonard named the owlets after the characters in the children’s book “Owl Babies” by Martin Waddell. The larger owlet is Sarah, and the smaller is Percy.

The Lee family took a different approach. They call the mother Hedwig, after Harry Potter’s pet, and the babies are named after Star Wars characters: Jabba and Baby Yoda.

• The U of M’s Raptor Center treats around 125 great horned owls a year.