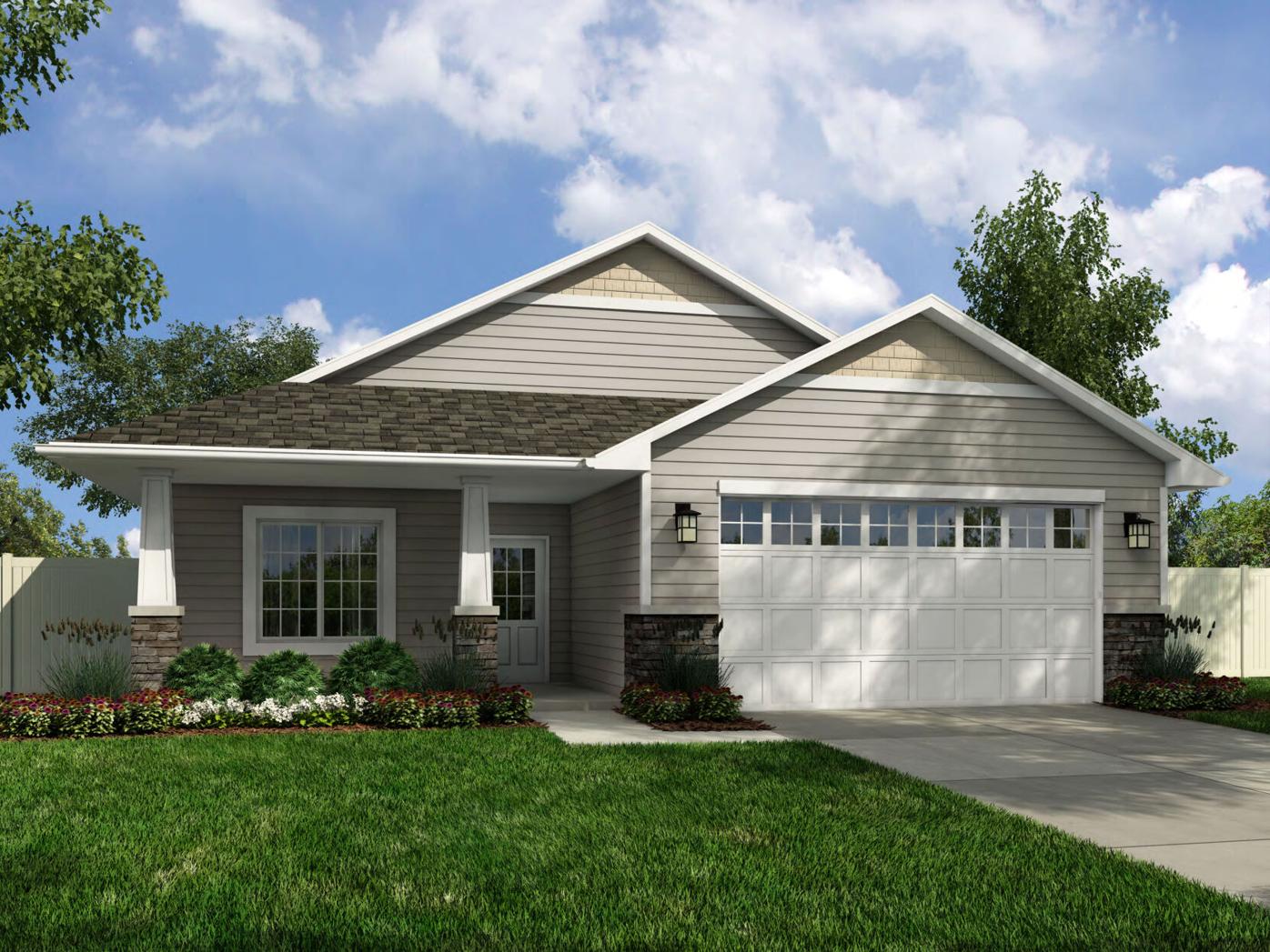 All homes in a planned 28-townhome development in Anoka will share this design but may be mirrored depending on which side the garage is on. Buyers may choose among earth-tone colors and may select brick or stone materials. (Image from council packet) 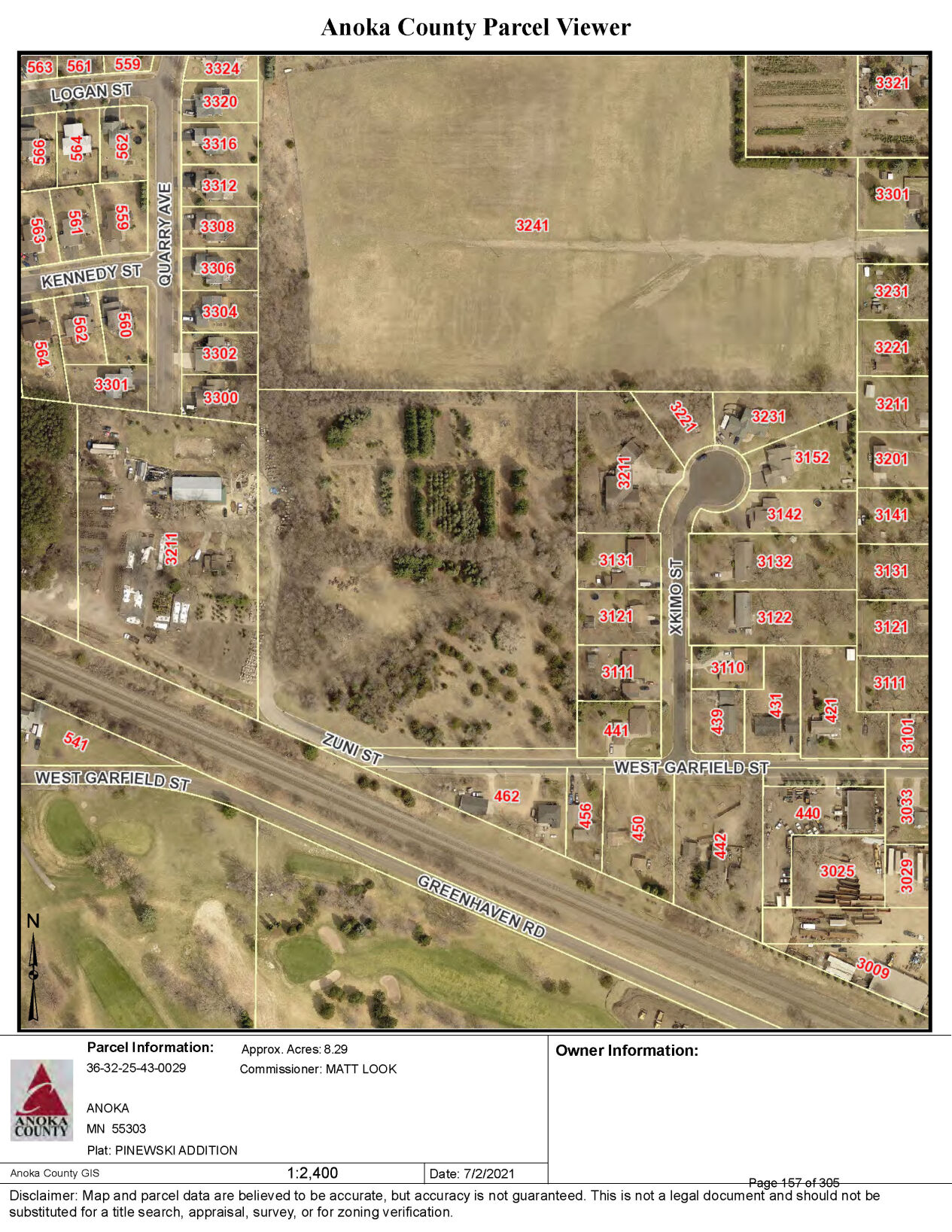 This image shows the location of a proposed development of 28 detached townhomes east of Shades of Green Landscaping and south of the Anoka County Fairgrounds overflow parking lot. The homes would go on the vacant lot in the center of the image. The Anoka City Council is expected to approve the second reading of the planned unit development Oct. 18. (Image from council packet)

Twenty-eight single-story, detached townhomes are planned on 8.3 acres of undeveloped land near the Anoka County Fairgrounds after the Anoka City Council gave preliminary approval to the development last week.

The developer, Brooklyn Park-based Novak-Fleck Inc., says the homes will be marketed primarily to people age 55 and older.

Project manager Horst Graser said the project targets homeowners who are looking to downsize but still want to live in a single-family home.

“They want to have level access, everything on one floor, and they want a garage that’s attached,” he said.

The project will be located east of Shades of Green Landscaping, south of the Anoka County Fairgrounds overflow parking lot and north of Garfield Street.

Homes will start around 1,600 square feet at a price of about $350,000. A homeowners association will maintain the common areas of the development, including driveways.

After some initial reservations from Council Member Erik Skogquist, the council unanimously approved the first reading of a planned unit development Oct. 4. Council Member Jeff Weaver abstained from the discussion and vote.

The plan allows lot sizes to be smaller than typically allowed under city code — 23 of the proposed lots are less than the 10,000 square feet usually required — but at 3.4 units per acre the density will fall within the typical 1-4 units per acre.

All the homes will have the same design in front, except that buyers may choose different colors of roofing and earth-tone siding and may select brick or stone materials. The layout will also be mirrored, depending on which side the garage is on. In order to break up the monotony, the city is requiring that no two houses of similar color scheme be built on adjacent lots.

Skogquist said he was on the fence about the project because he was “not overly impressed” with the product being offered in exchange for the flexibility in the lot size, saying he wished it fit into Anoka better or wasn’t so monotonous. He also mentioned that some neighbors had concerns.

Graser told the council that the site presents a number of challenges, including drainage issues and access requirements for nearby properties. Given all the relevant factors, he believes it fits well in the city.

Council Member Brian Wesp noted that the Planning Commission didn’t sign off on the original proposal and that the developer tweaked the plan after listening to the concerns of the commission and neighbors.

“I think it’s been thought through,” Wesp said.

He added that he’s not bothered by the housing product itself, saying it would add millions of dollars in value to the city’s tax base.

Mayor Phil Rice said the product itself is attractive, but he thinks the provision requiring adjacent homes to be different colors is important. He also welcomed the development as a positive addition to Anoka.

“We’re going to add 28 new neighbors that are good for the city of Anoka, and we appreciate the effort and development that you’re making,” Rice told Graser.

The planned unit development is scheduled to come back for final council approval Oct. 18. The council will also consider a preliminary plat and site plan review at that time.