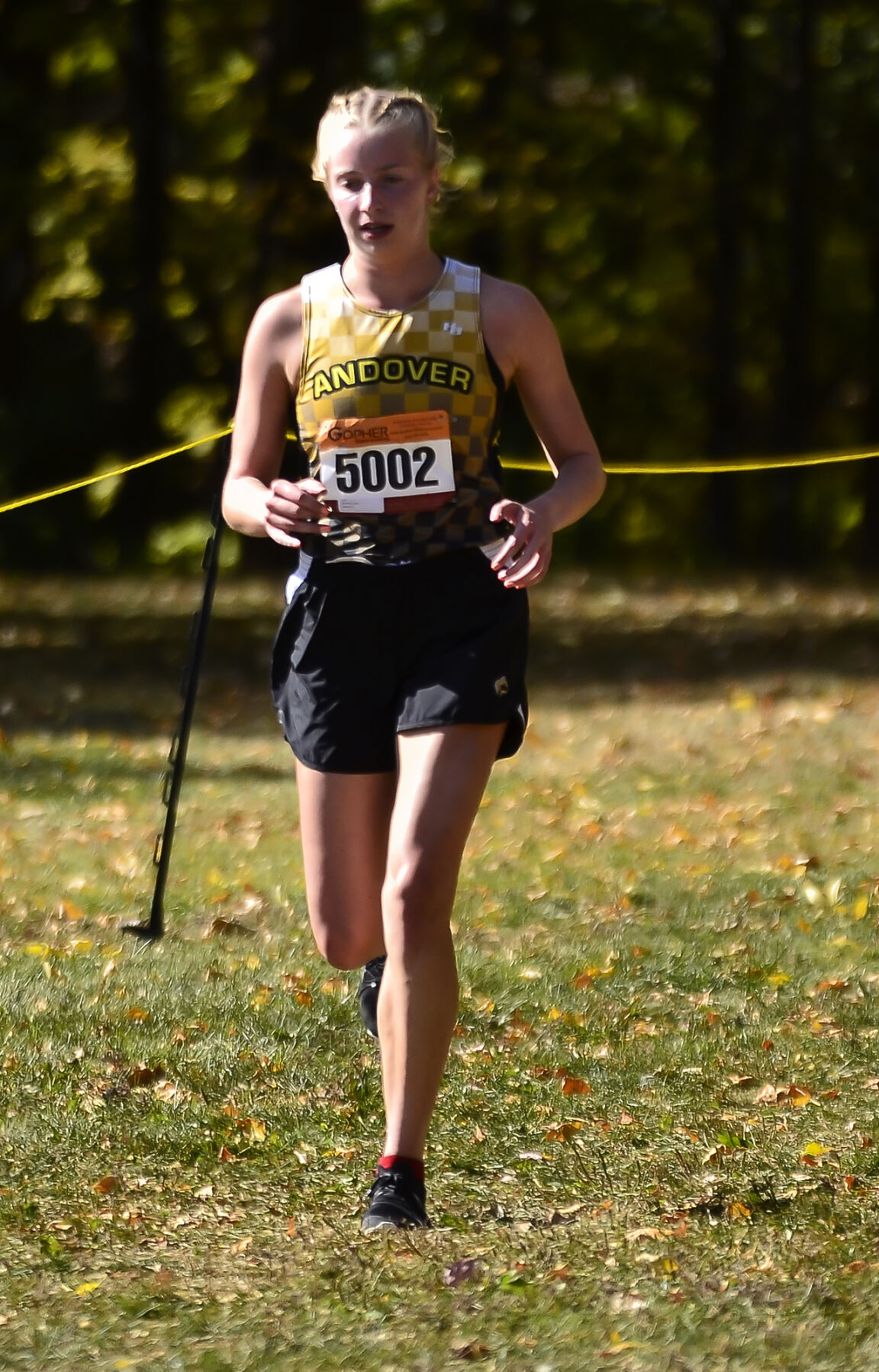 Andover senior Claire Beckman paces herself around the first loop at the 5K course in the Northwest Suburban Conference girls cross country meet at Bassett Creek Park in Crystal. Beckman won the individual title in 19 minutes, 4.1 seconds, and Andover won the team title with a 40. 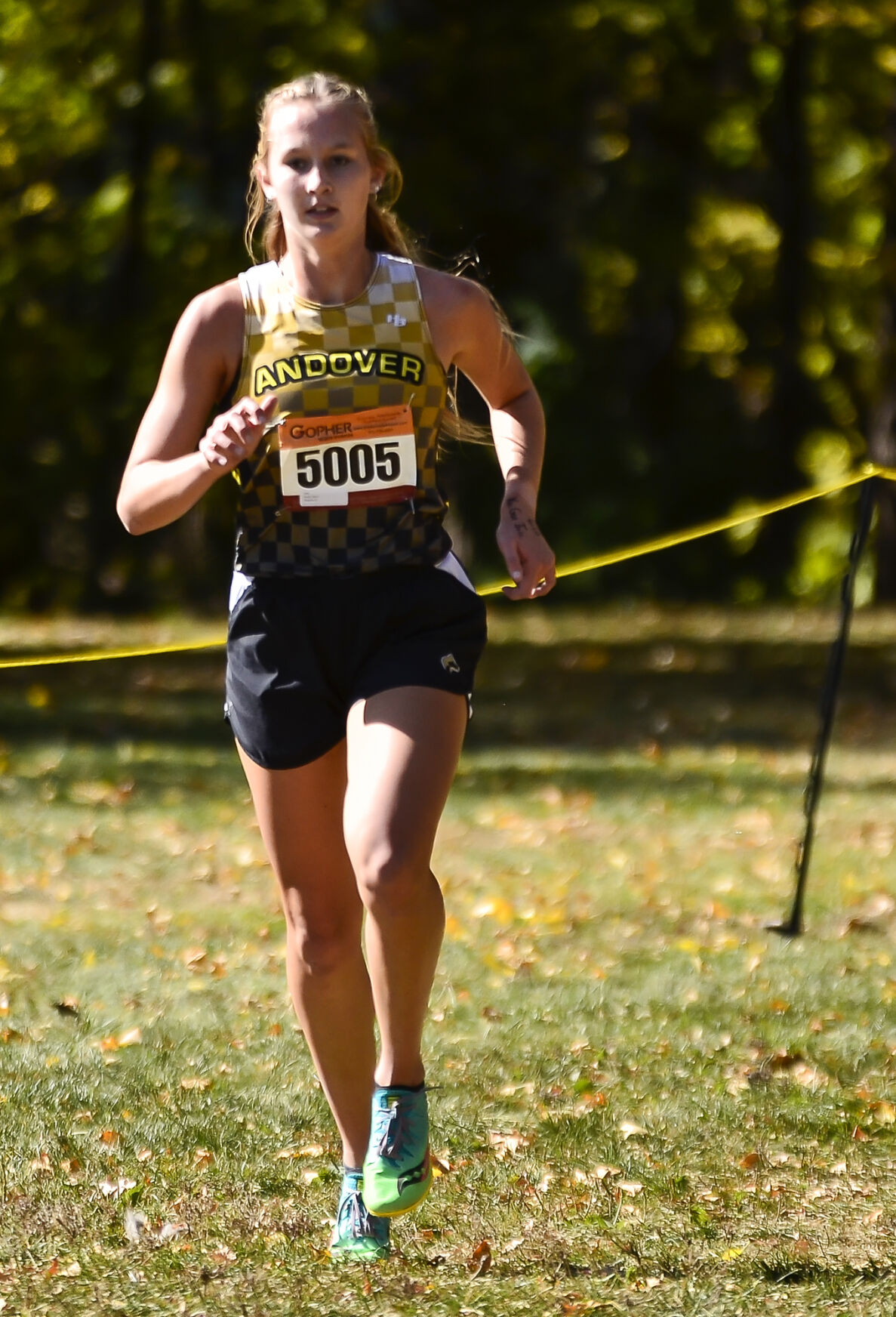 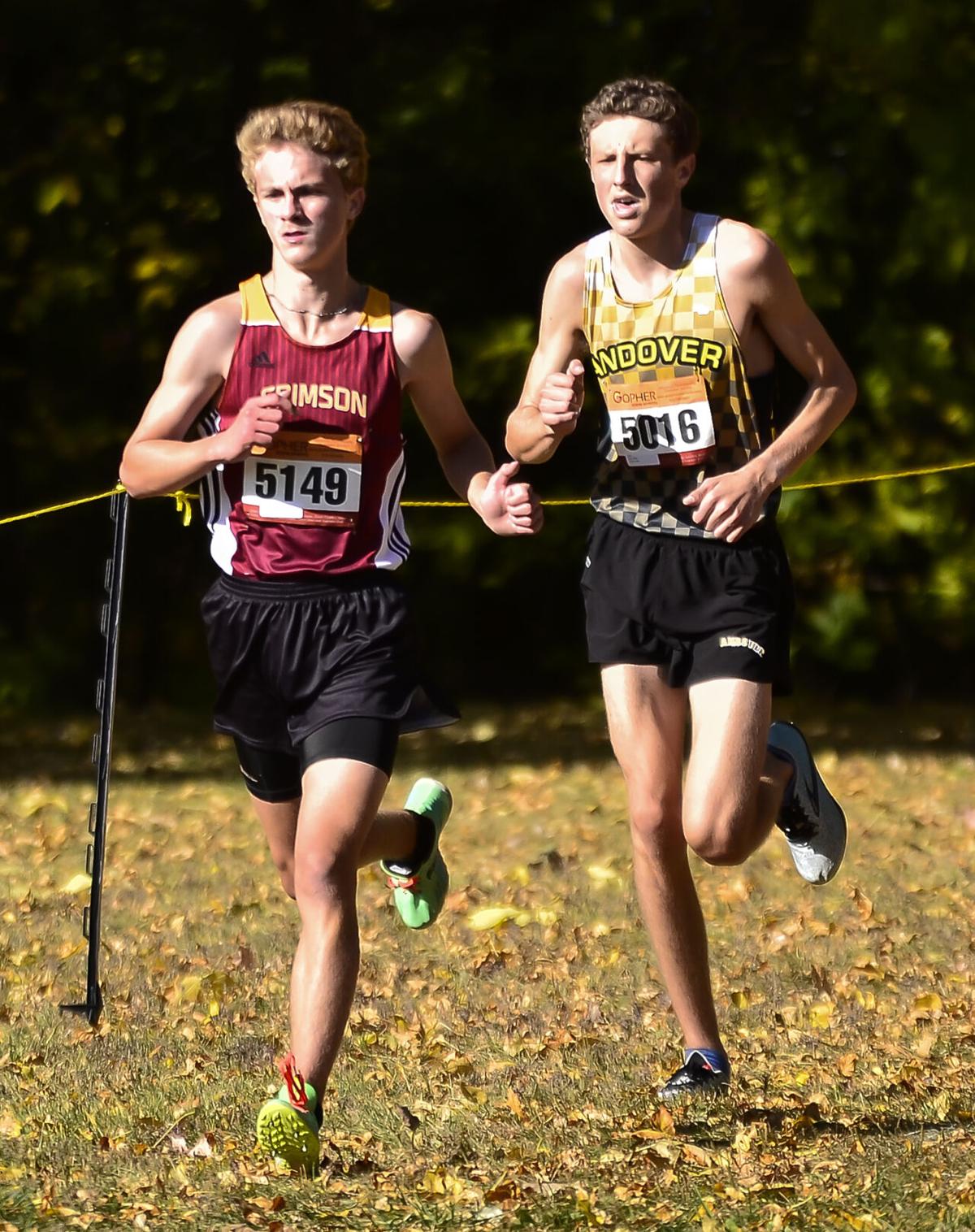 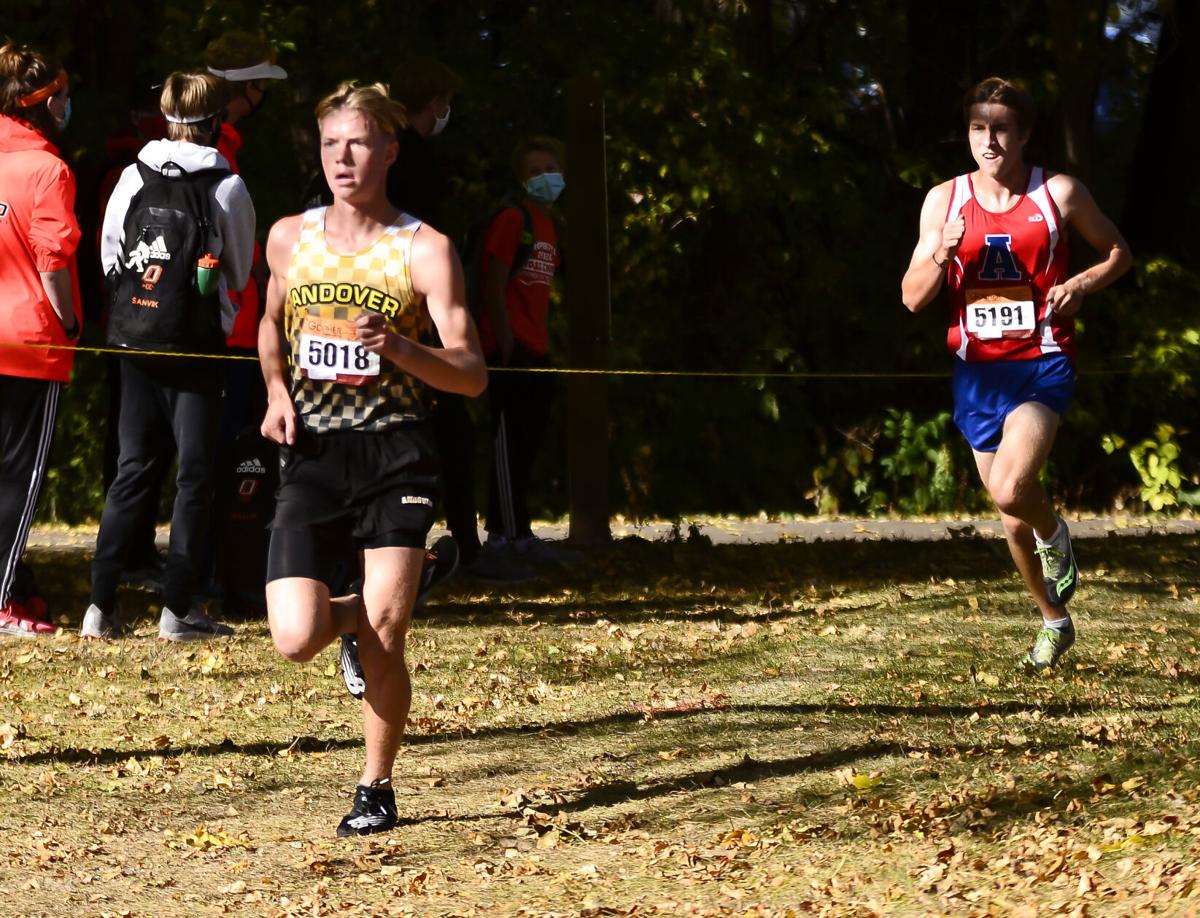 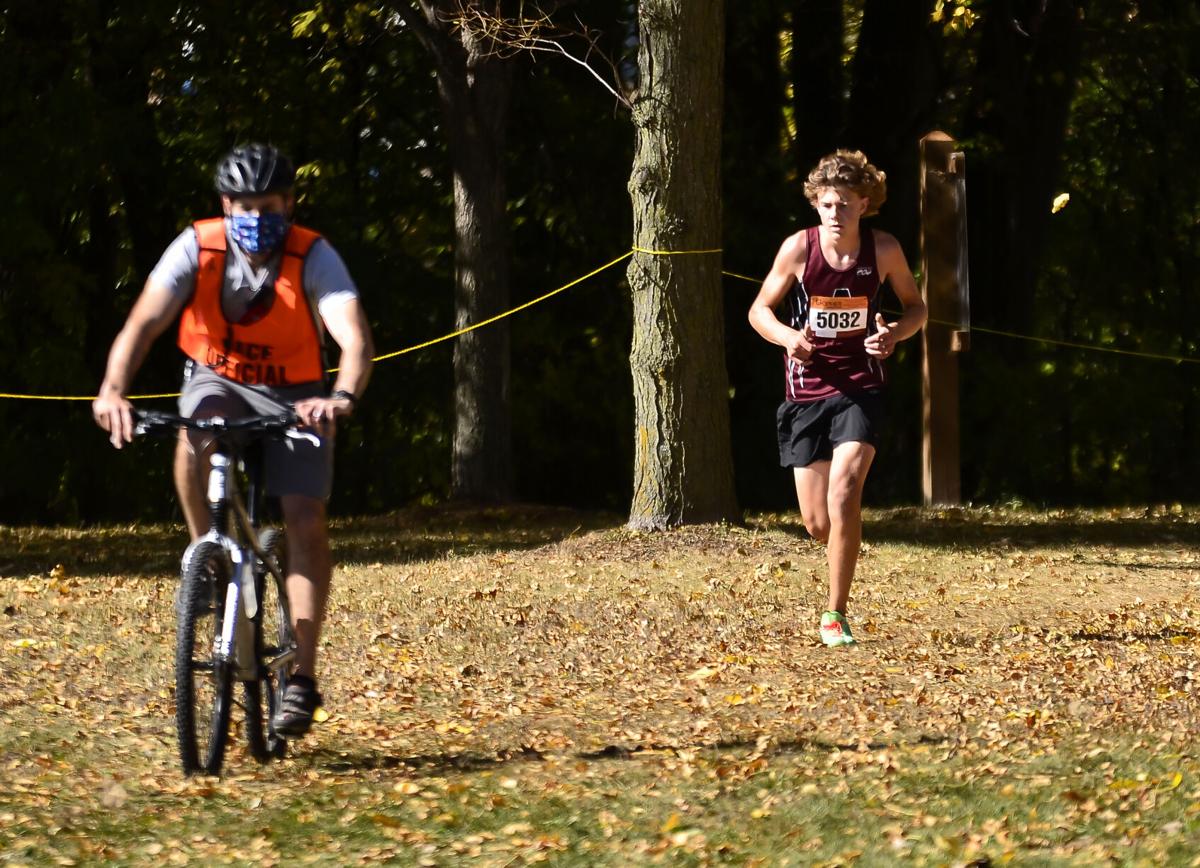 Anoka junior Nicholas Becker races in front of the pack during the fourth of five races at the 5K course in the Northwest Suburban Conference boys cross country meet at Bassett Creek Park in Crystal. Becker took 24th in 17 minutes, 47.5 seconds. 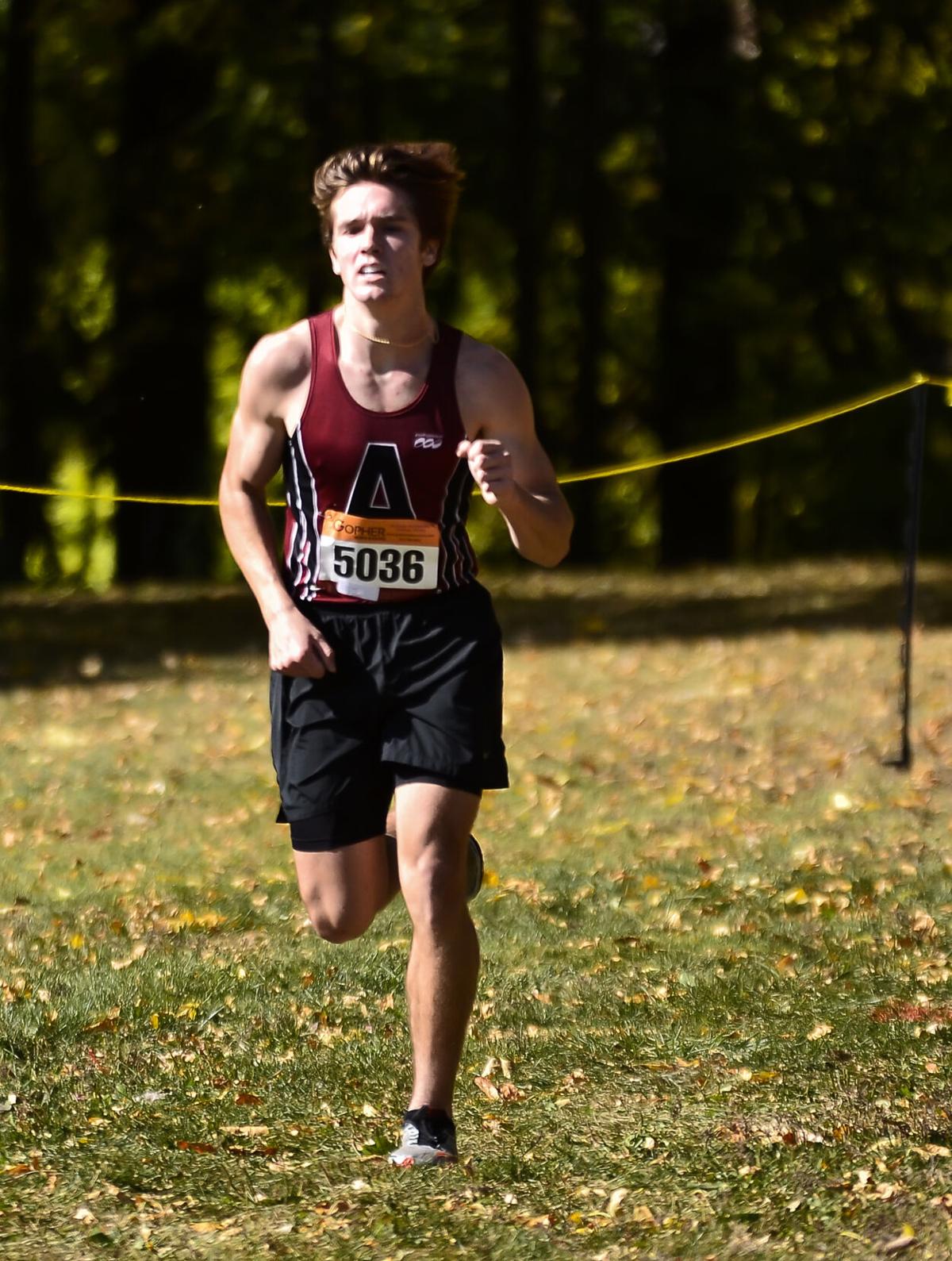 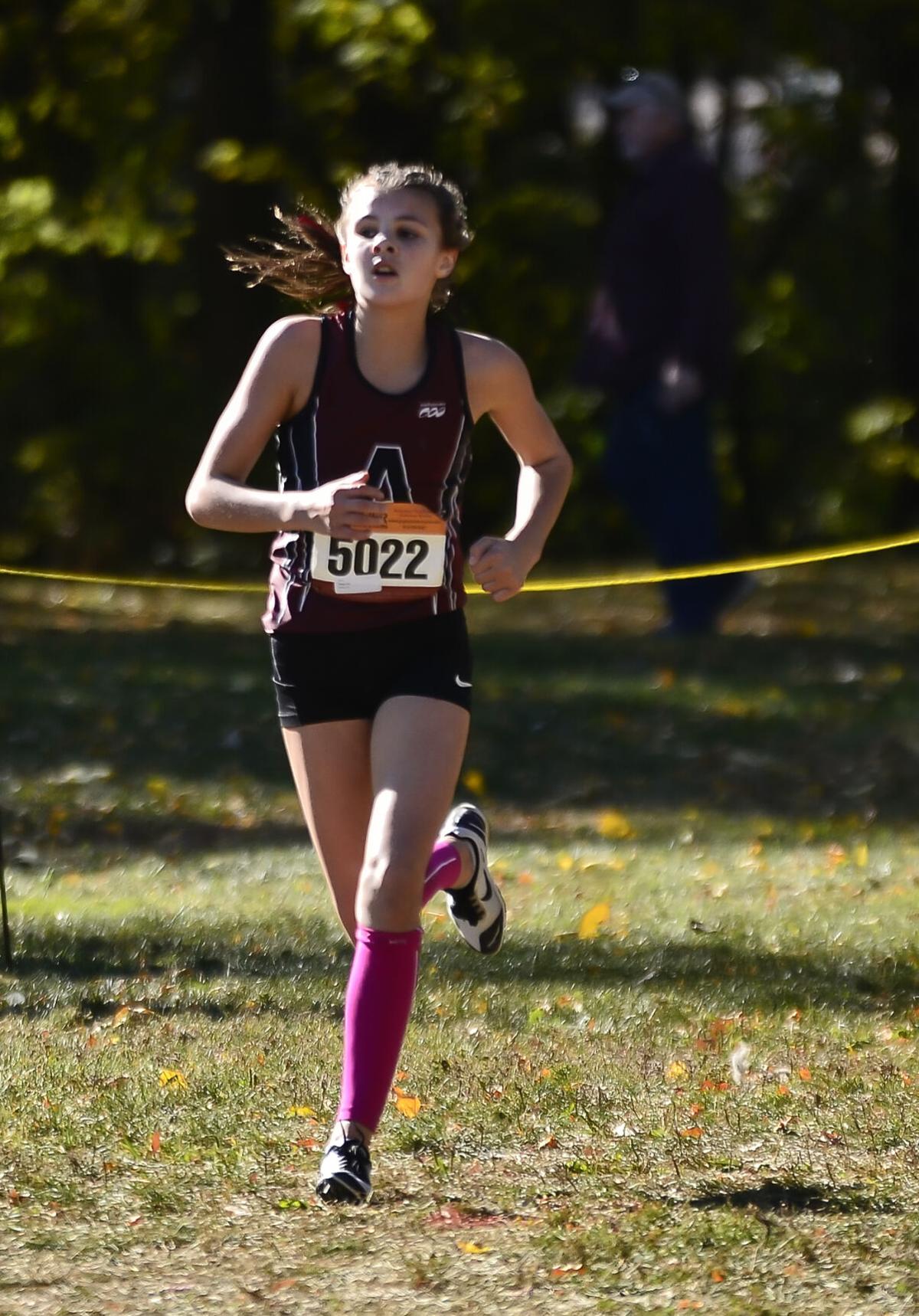 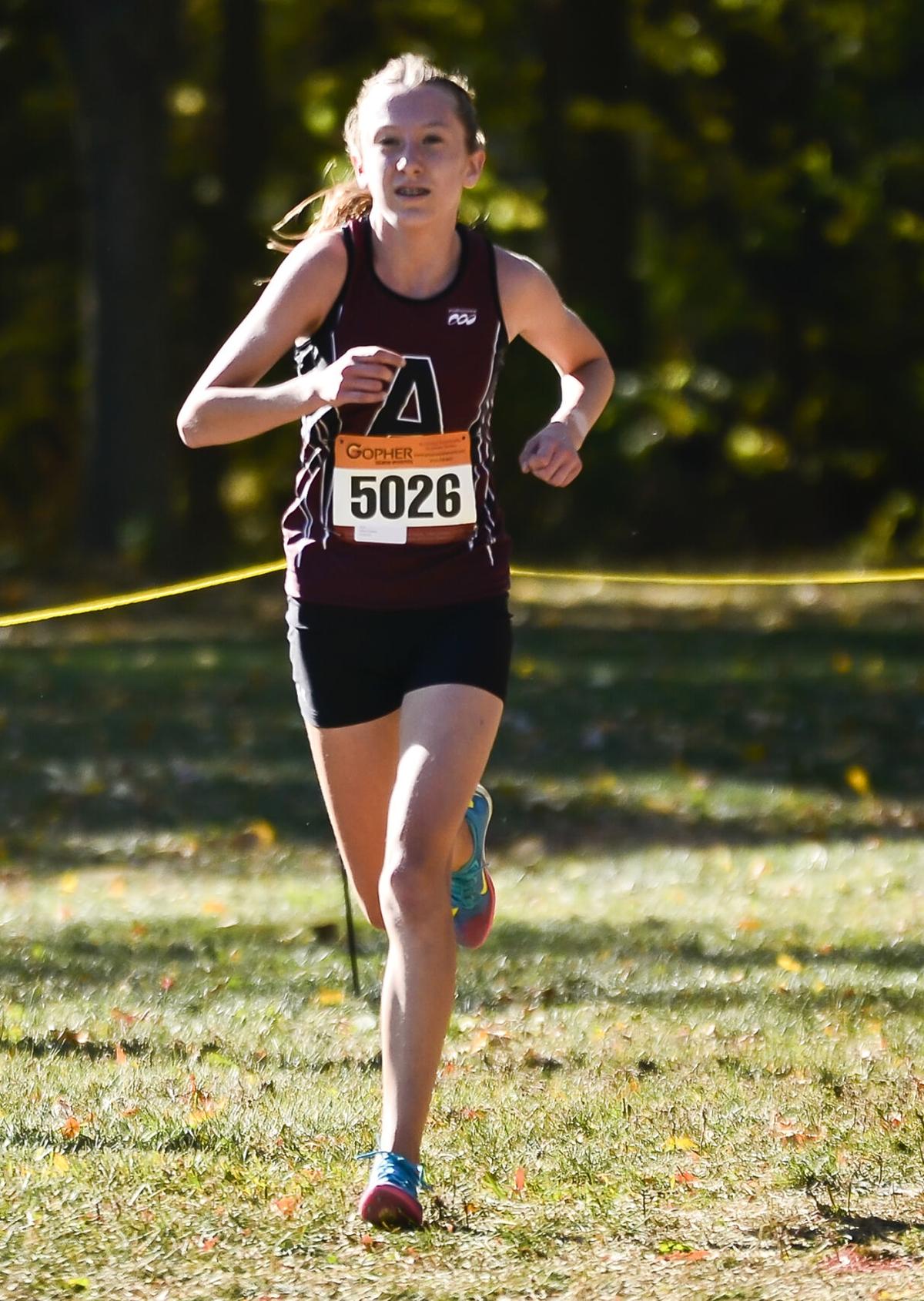 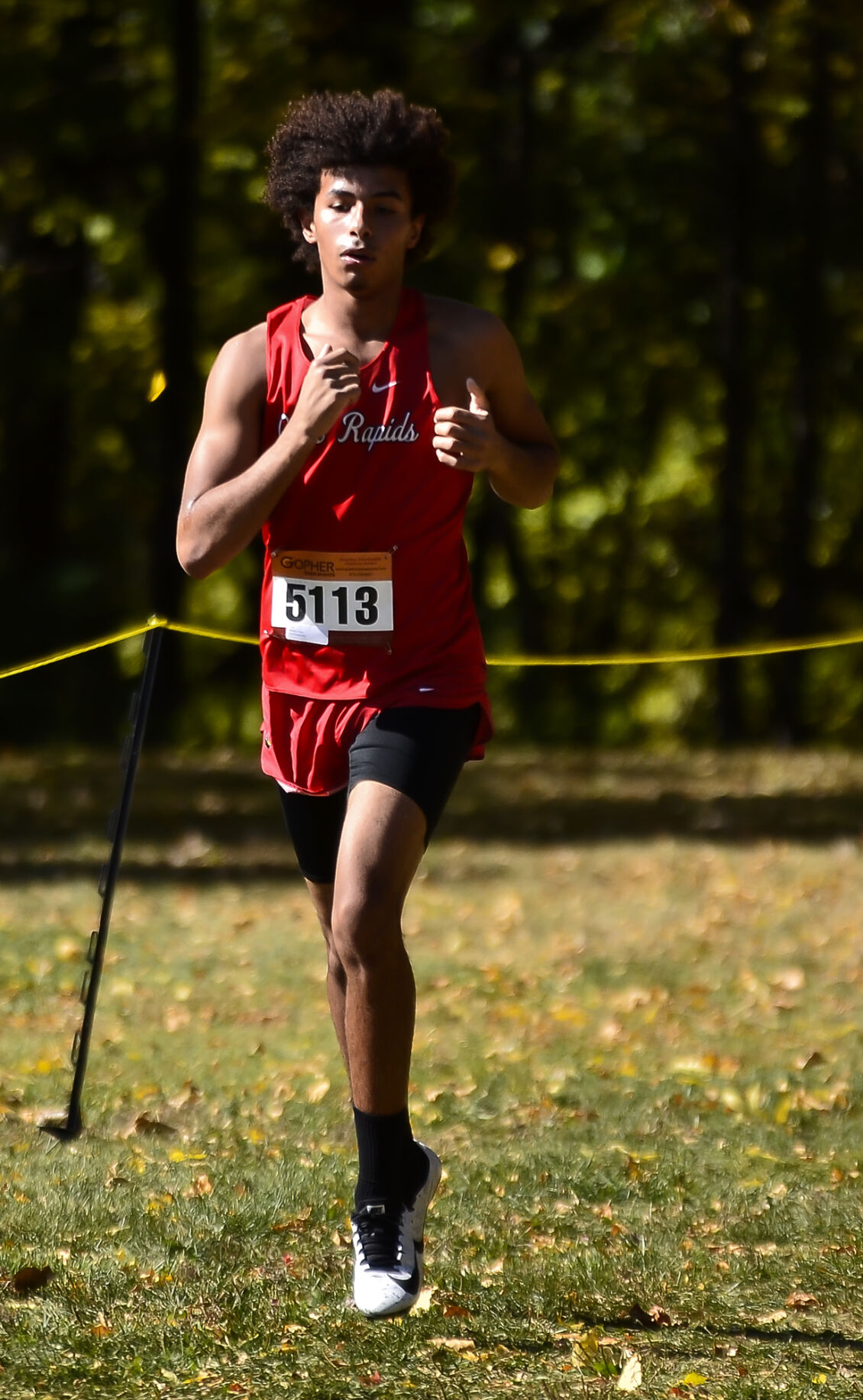 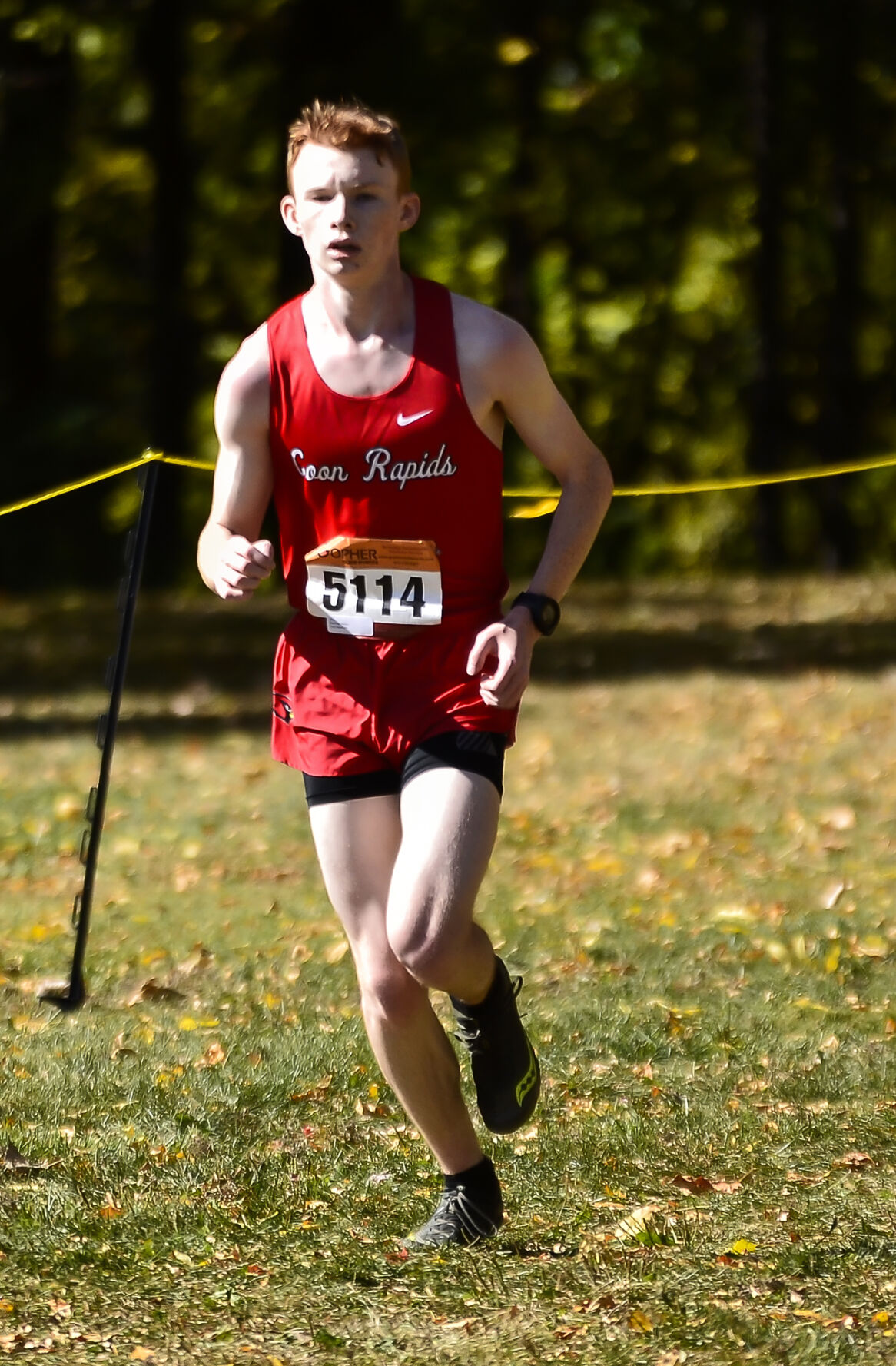 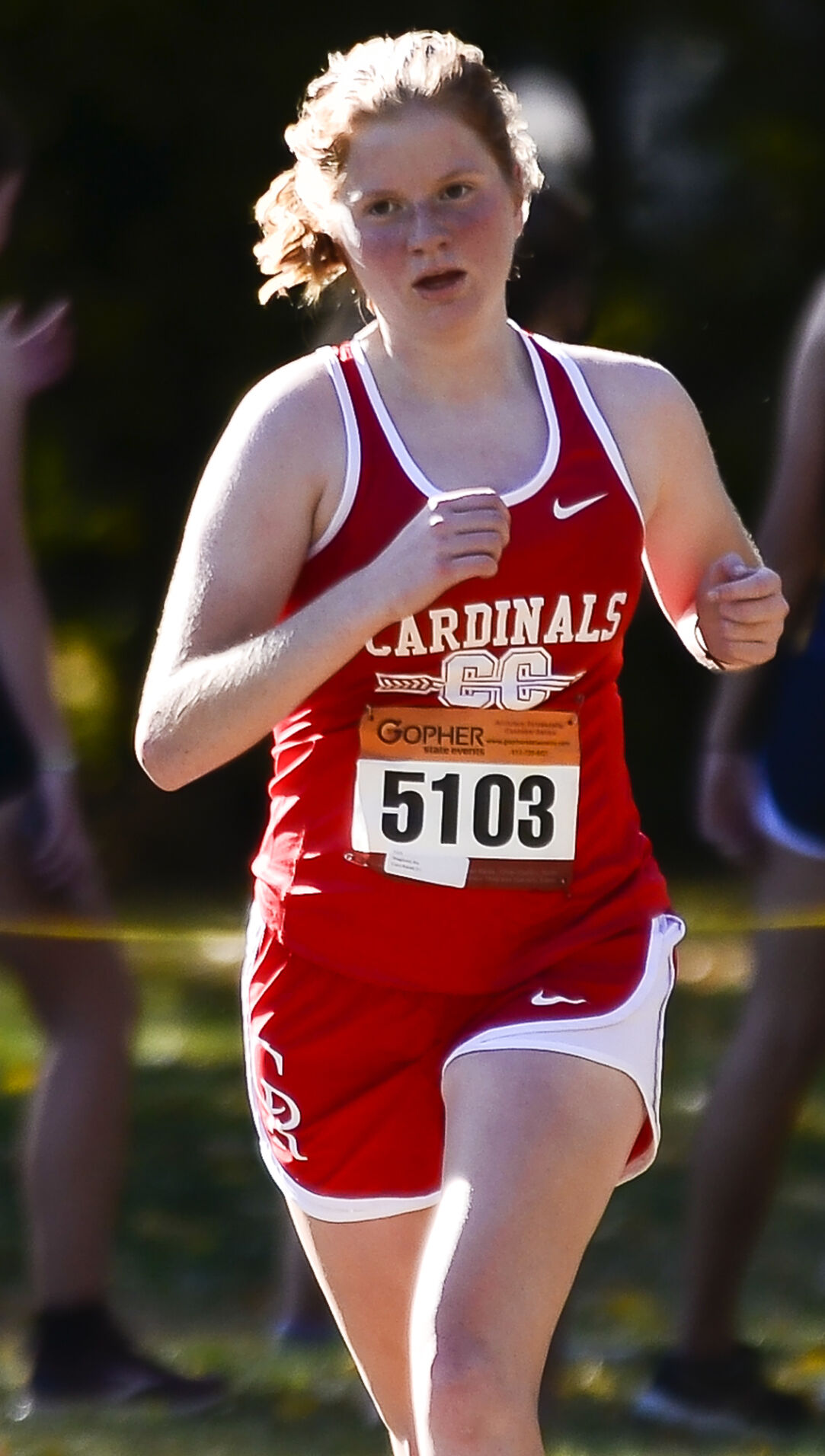 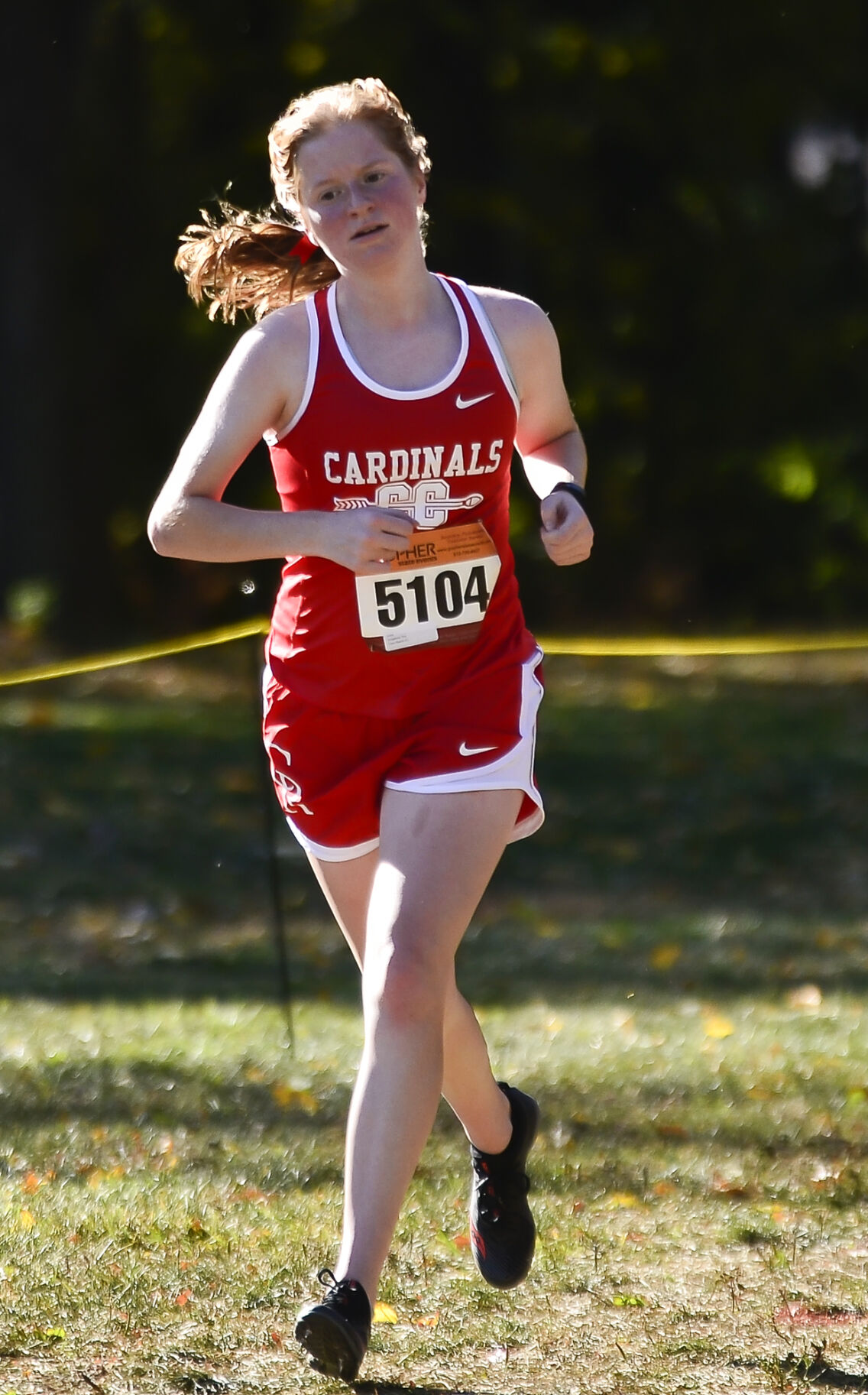 Andover senior Claire Beckman paces herself around the first loop at the 5K course in the Northwest Suburban Conference girls cross country meet at Bassett Creek Park in Crystal. Beckman won the individual title in 19 minutes, 4.1 seconds, and Andover won the team title with a 40.

Anoka junior Nicholas Becker races in front of the pack during the fourth of five races at the 5K course in the Northwest Suburban Conference boys cross country meet at Bassett Creek Park in Crystal. Becker took 24th in 17 minutes, 47.5 seconds.

It was a Northwest Suburban Conference meet unlike any other.

Except for the finish.

The Andover girls cross-country team ran away with the NWSC crown at Bassett Creek Park in Crystal Oct. 7, its fourth conference championship in a row.

“As a coach, it is always enjoyable to see athletes strive to improve and when that improvement includes titles it makes it very special,” Andover head coach Scott Clark said. “In our conference, with 14 teams, it is rare to win one conference title. Winning four years in a row is quite a unique accomplishment.”

The Huskies, as they were throughout the year, were led by senior standouts Claire Beckman and Alyssa Gerth. The duo swept the top two spots, with Beckman crossing the line in 19:04.1 and Gerth in 19:06.7.

“The race was hot and a fight, but I persevered and ran to my ability,” Beckman said. “The last 800 meters I really focused in and ran my race. Getting the opportunity to finish with my teammate Alyssa was incredible. We have worked together since freshman year, and she has made me a better runner and teammate since.”

“The race went pretty well for me – I had a good first and second mile, but the last 1,000 meters of my race I’ve got to remember to kick it in,” Gerth said. “It’s always great to run with your teammate and both be successful, and I am so happy that me and Claire were able to push each other.”

The Huskies’ next three runners all finished in the top 20 as well to earn all-conference honors and help create a 27-point gap between them and runner-up Maple Grove.

“The girls team put on a very impressive performance, with five runners finishing in the top 20,” Clark said. “Throw in Claire and Alyssa finishing first and second and it becomes quite a dominant performance. Both Claire and Alyssa ran excellent races, with Claire making a big move to close on Alyssa with about 600 meters to go and then capped her race with an excellent finishing kick. It was Claire’s best race so far this season.”

Winning a team championship takes more than one or two elite runners. And winning a string of championships takes a deep program that continues to develop top competitors.

“This team amazes me every day,” Beckman said. “I’ve had the opportunity to captain a talented group of girls, and they always strive for better. Each workout has led them to winning conference for the past four years.”

“Over the four years we have lost excellent leaders and racers to graduation, and in each of the following seasons someone has stepped up to make a difference for the team,” Clark said. “This year second-year runner Olivia Krafty was that person with her 11th-place finish.”

The race took on a much different type of atmosphere than previous seasons, as social distancing protocols necessitated the meet be split into five different pods throughout the day, with all times then combined at the conclusion of the races. Competing during the first time slot, the Huskies set the bar individually and as a team early on, then watched as no one else could match them –– as teams or individuals.

“Racing with only three teams makes the competition less intense, but you must push yourself through every mile,” Beckman said. “I keep looking ahead and pick up the pace when I can. Racing at a conference meet is fun no matter what.”

A unique race in an extraordinary season, one that will culminate at sections instead of state as usual. But one that the Huskies have found a way to thrive in.

“Almost all of the courses this year we have never ran before, so this conference championship has meant so much to the whole team,” Gerth said. “Earlier on in the season we had only beat Maple Grove by one point – that just shows how hard this team has worked to get better and to run faster. I am so incredibly proud to be a part of this team, and I can’t wait to see what we accomplish in our section race! This has been a crazy year with the virus and everything that’s been going on, so I am just incredibly thankful that we have all been given the chance to be able to run and compete.”

“Having the conference meet, and this season in general, is a blessing, and I’m grateful for the opportunity,” Beckman said. “As a senior, it’s not ideal, but no matter the situation I enjoy working hard with my teammates, and dominating the competition.”

“Watching the team grow over this streak has been very satisfying and with the added complexity of dealing with the pandemic it is even more so,” Clark said. “When you consider that we weren’t even sure there would be a season back in the middle of the summer and if we did, what it would look like, made it stressful for the athletes. Throw in mask and social distancing requirements, as well as spectator limitations, no invitationals, finding new places to hold meets, a canceled state meet, COVID scares and a change to how schools would function and you begin to understand how challenging it was for the runners. Quite frankly these kids did an amazing job of staying focused and positive throughout the season.”

The Anoka girls earned 11th as a team at the meet, led by Kaelyn Nelson securing fifth overall in 19:31.1.

Cameron Heppner won a down-to-the-wire showdown in the NWSC boys race, taking the individual title by less than a second in 16:23.3 to lead the Andover boys to a runner-up team finish.

“Cam ran a near perfect race on to come away with the individual title,” Clark said. “He ran a very controlled early and middle portion of the race hanging back from the leaders for the first two and a half miles, yet keeping them close. Then with about half a mile to go he began a push to catch and then pass the leaders. It was a masterful performance, exactly how he planned it out.”

“Overall the team didn’t run as well as they had during the regular season, though they still managed four all-conference finishes and two honorable-mention finishes,” Clark said. “It’s difficult to complain when the team went from a 10th-place finish last year to a second this year.”

The top 28 individuals earned all-conference, with the next 14 receiving honorable mention.

“As you can imagine this season was filled with adversity for the athletes,” Clark said. “It almost seemed that there was a new and unexpected challenge on a daily basis. Yet these kids were one of the most positive and focused groups that I have ever coached.”