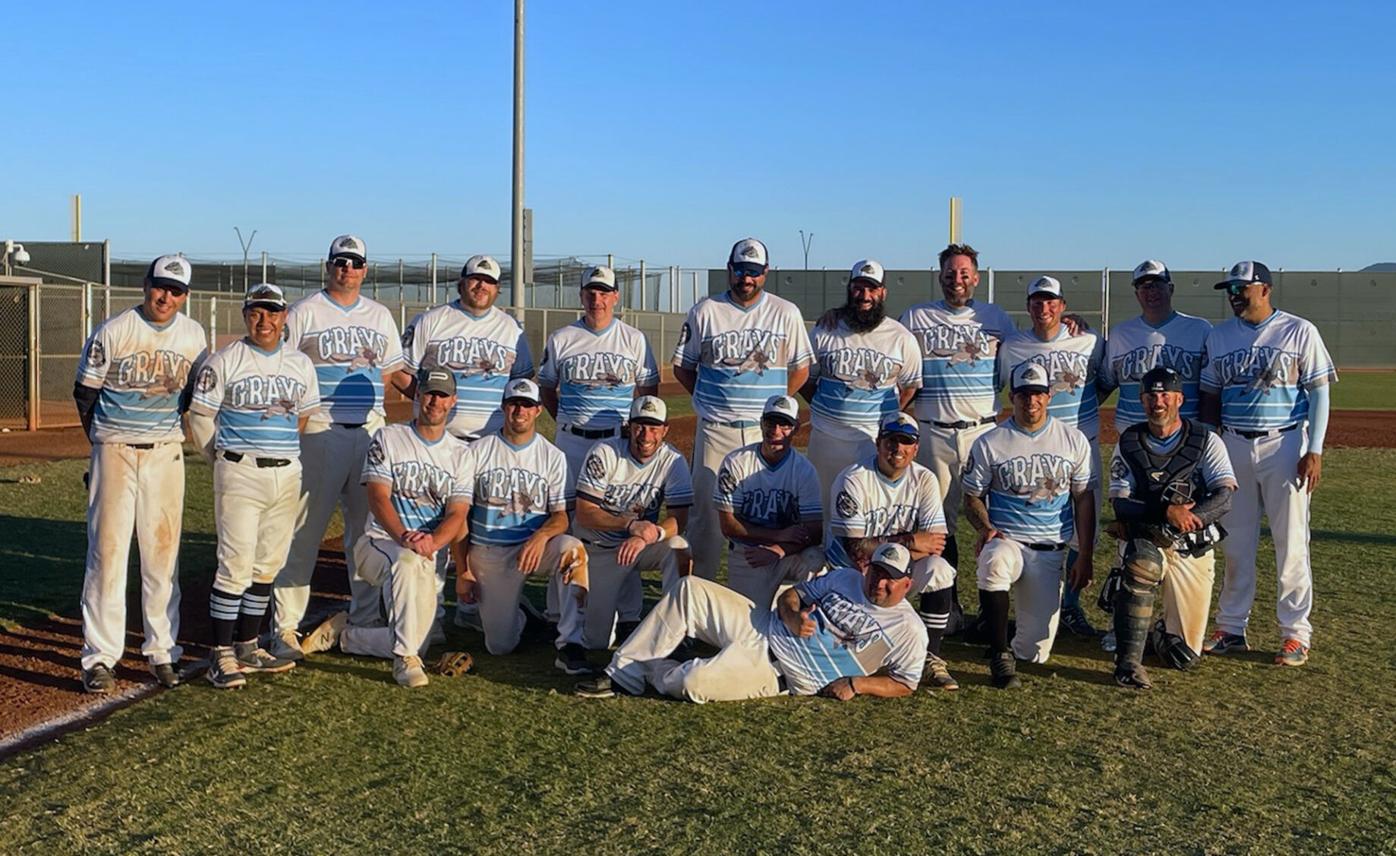 The Minnoka Grays baseball team, based out of Anoka, made it to the quarterfinals at this year's 35-plus World Series in Arizona. The team is made up of area players who have either returned to or never left baseball, sharing a common love for the game. 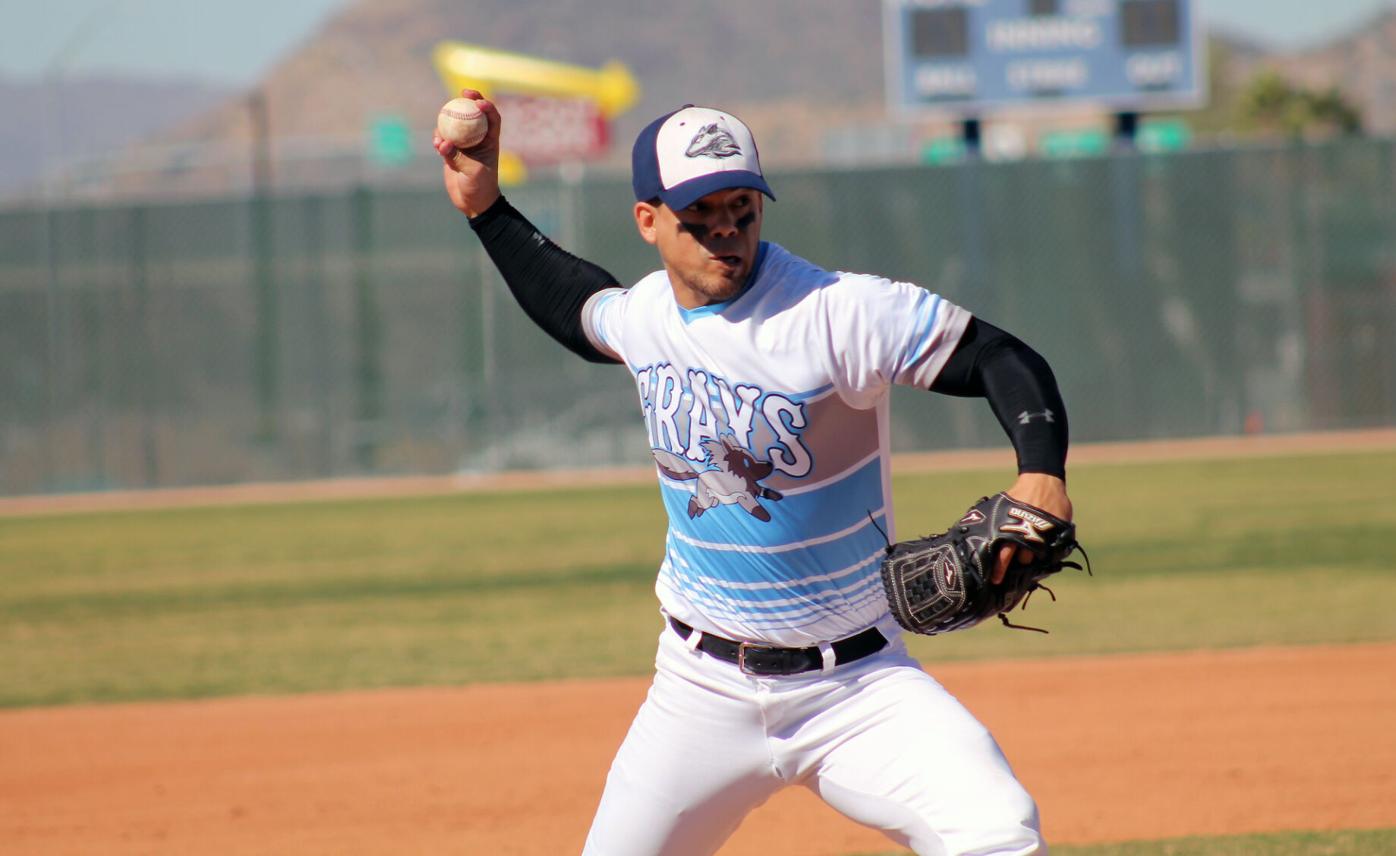 Anthony Gonzalez, Minnoka's leading pitcher at the World Series with a 2-0 record and 0.56 ERA 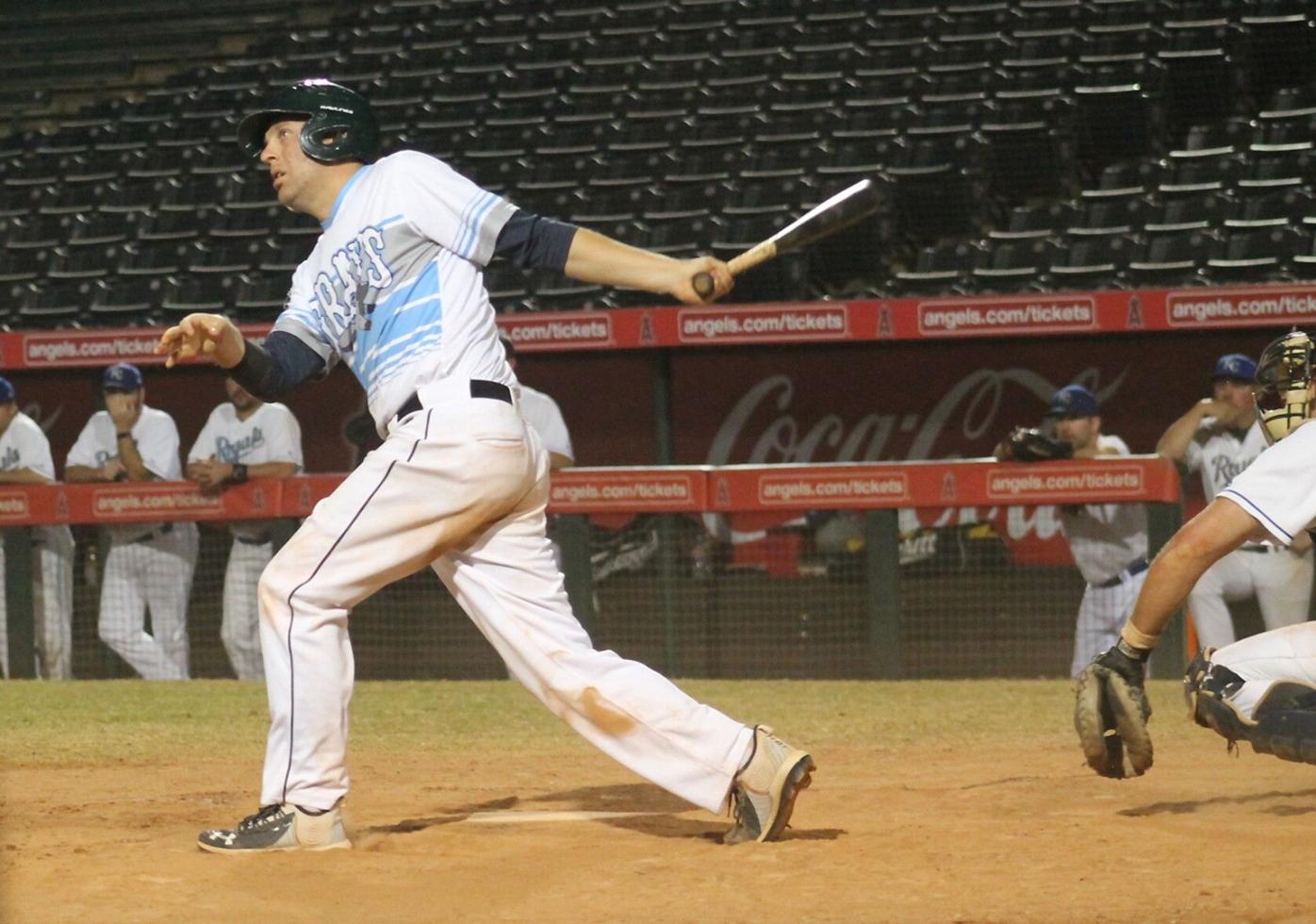 The Minnoka Grays baseball team, based out of Anoka, made it to the quarterfinals at this year's 35-plus World Series in Arizona. The team is made up of area players who have either returned to or never left baseball, sharing a common love for the game.

Anthony Gonzalez, Minnoka's leading pitcher at the World Series with a 2-0 record and 0.56 ERA

It’s a slice of the big leagues and a throwback to youth ball, in a community where the love of the game knows no age limit.

A strong summer season earned the Minnoka Grays a spot in the 2021 35-plus World Series in Arizona, reaching the quarterfinals as they closed the year with eight games in the desert sun.

Minnoka — a combination of Minneapolis and Anoka — has played for 12 years, moving to Anoka in 2017 where it now plays at Castle Field. In its existence, the team is 106-63, finishing third in Federal AAA the past two years and the Federal Western Division champion this year as they earned a World Series spot.

Players on the team have taken different routes to the Grays. Some have played baseball every year throughout their lives. Others became too busy or turned to other activities. A few suffered burnout and returned.

All on the field now, though, are enjoying every inning they can in a game that brings out the kid in everyone.

"Before the Grays, I thought I was stuck playing softball — sorry, softball guys, but hardball is better! When we talk to other teams in Arizona, they are amazed at the quantity and quality of the baseball in Minnesota,” Jon Widerski said. “Baseball is such a family and community sport in this state. We have found jobs for each other, cleared debris from a storm, attended weddings and gave youth baseball lessons. The best part about it is, new guys keep coming and adding to the team as others retire. It’s like a living being that keeps this team and sport alive.”

“I had a different journey than some of the other guys on the team,” Michael Crane said. “After having an experience in college that left me very bitter towards the game, I decided to give it another go after 10 years off and landed on the Grays. The men on this team reignited my love for the game. I could write pages about all the aspects of what makes my teammates and their families great, but it comes down to something I tell them all the time: ‘This is just a bunch of children playing baseball.’ We all play with a lot of fun and a lot of heart. I love this team.”

“As a group, it means being part of something bigger than yourself,” Michael Weyrauch said. “Not too many guys continue to play baseball at this stage in life, so for us to play is really a privilege none of us takes for granted. I had baseball taken from me in my early 20s when I had some shoulder surgeries and came out of it unable to throw. Coming back to playing baseball in my 30s was never something I thought I would be able to do, so every day I put the spikes on I feel blessed to be able to do so. Baseball has been my getaway from the daily grind of life, family, work, etc. When I am out playing ball, nothing else is bothering me and I can just go out, play hard and have fun for a few hours like I did when I was younger.”

On the field in the World Series, Minnoka went 4-3-1, outscoring opposing teams 83-57 to reach the quarterfinals out of 30 teams participating. Dan Skog was the leading hitter at a .619 clip and Alex Gonzalez was the top pitcher, going 2-0 with a 0.56 ERA with 18 strikeouts.

“Actually being our first time down as a complete team, I was surprised on how well we played,” Lars Larson said. “Some teams go down to Arizona as ‘all business’ or ‘all party,’ and the fact we were able to still have fun on and off the field and still compete at a high level was inspiring, and I was happy for the guys on the team, because this was a vacation for most.”

“There were a variety of skill sets across the different teams that we competed against,” Joey Olson said. “In pool play we lost a one-run game to a team from Puerto Rico, which has ex-professional (minor leaguers) on their roster. On Thursday evening we got to play a Stadium Game (Tempe Diablo — spring training home of the Los Angeles Angels). Beautiful park and amazing experience for the group.”

“All of the teams we faced in Arizona were good guys having fun playing a kids game,” Widerski said. “We met teams from across the U.S. Every team starts out strong, but it’s a long week! The physically and mentally strong will prevail in this tournament. The moment that stands out for me is when our manager, Lars Larson, hit a line drive to right field to drive in two runs at Tempe Diablo Stadium. The bench went wild! We were so happy for him.”

The tournament also offered a celebratory trip for family members who offer unwavering support, and cheers from the stands, for players still enjoying the game.

“Many members of our team were able to travel with friends and family who enjoy baseball and vacationing,” Olson said. “I had the pleasure of having my parents, and sister’s family (Dan Skog, Gretchen Skog, Kensi, 7, Arthur, 5, and Tatum, 3) be part of the experience as well. At the stadium game all three kids were allowed on the field to run the bases, play catch and take some BP before the game. During the game each got to spend time in the dugout and took turns as the bat boy/girl. Each loved being part of the team and thought they were a ‘superstar’ based upon their experience.

“My anniversary actually fell on the last day of the tournament and my wife did not even question whether we should go or not,” Crane said. “She was so supportive all week and it was a great consolation prize to have a pool day and great anniversary dinner with her the day after we were knocked out of the tournament.”

“We mostly did things together as a team, like had a team dinner hosted by Clancy’s in Scottsdale,” Larson said. “They went out of their way to make us feel welcome. But most nights the team went out and bonded over drinks, food, Phoenix Suns basketball and random bars and nightclubs. We also showed support to the other Minnesota teams in the tournament by attending their games. Overall, it was a great trip off and on the field, and guys are already making plans for next fall.”

One of the biggest challenges of the tournament is its condensed schedule, sometimes with multiple games on a given day with limited rest. Nonetheless, the baseball veterans on and off the field were up to the task. All part of taking full advantage of every unique opportunity to keep playing the game they love.

“This tournament is an absolute grind,” Crane said. “Six full games in four days to determine seeds for a single elimination bracket over two more days? You can’t get through something like that at our age without incredible support from your teammates on the field and your family off the field. Our GM and team leaders did an incredible job organizing. Playing and living together for a week certainly made us all much closer friends and really makes us all excited for next season.”

“I knew this year in Arizona was going to be special,” Widerski said. “I have played with other baseball teams in the past, no other team has more fun playing the game than the Grays do! This opportunity, to relearn how the game was meant to be played (having fun), in fabulous facilities and alongside great friends created some wonderful memories I’ll cherish forever.”

“To be able to play this game, and pretend we are big leaguers for a few days, is an amazing experience,” Weyrauch said. “To do it with this group of men just feels so special. We are a close-knit group of guys who love to have fun, joke around, laugh, and have a great time while playing, we think, a solid level of baseball. There’s no other group I’d rather play ball with.”