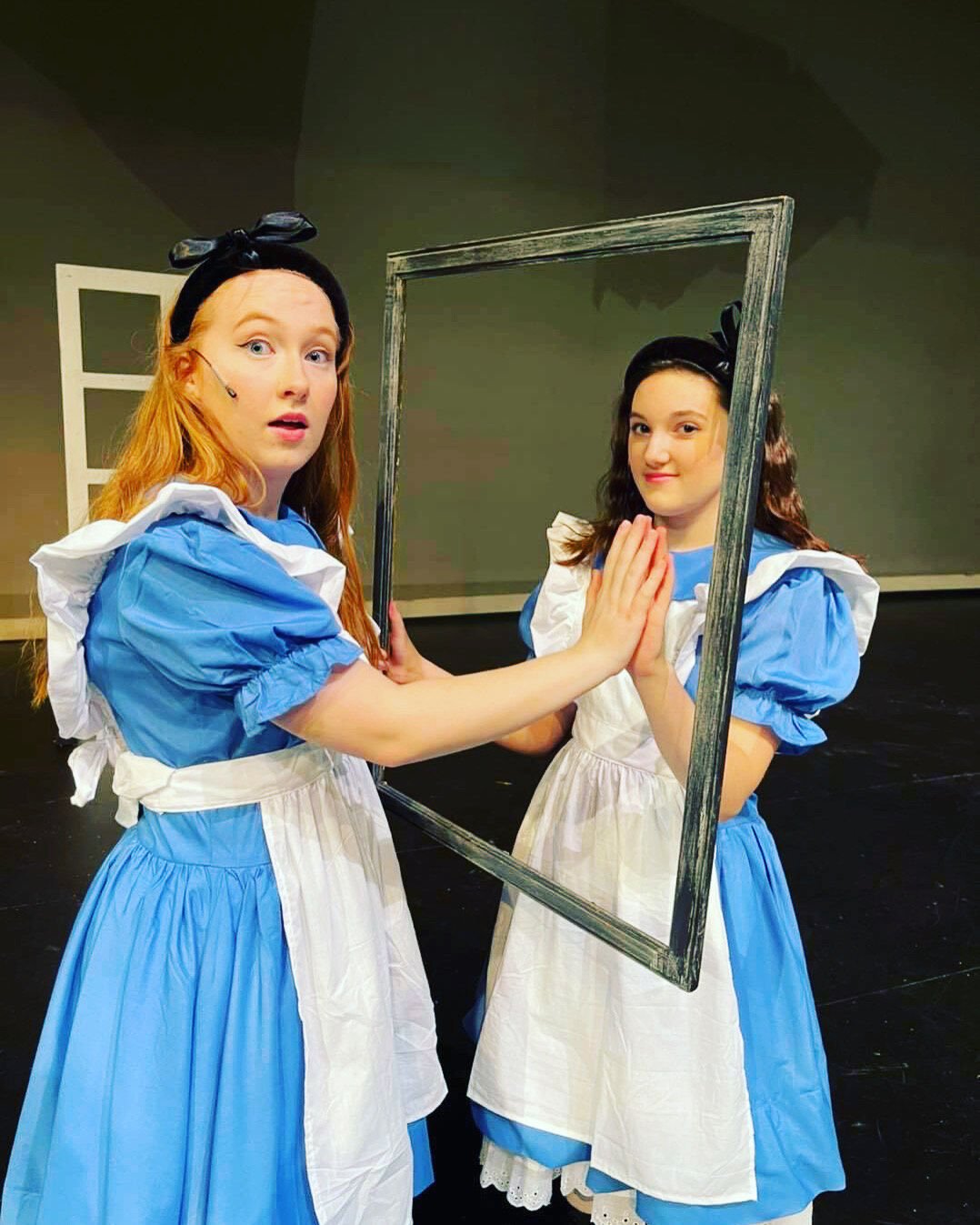 Seniors Emma Hendrickson (Alice in Wonderland) and Gabby Rosen (Alice in Looking-Glass Land) help lead the way in the captivating world of characters based on the Lewis Carroll novels in Andover Theatre’s “Alice” and “Through the Looking-Glass,” performing its final weekend Nov. 19-21. 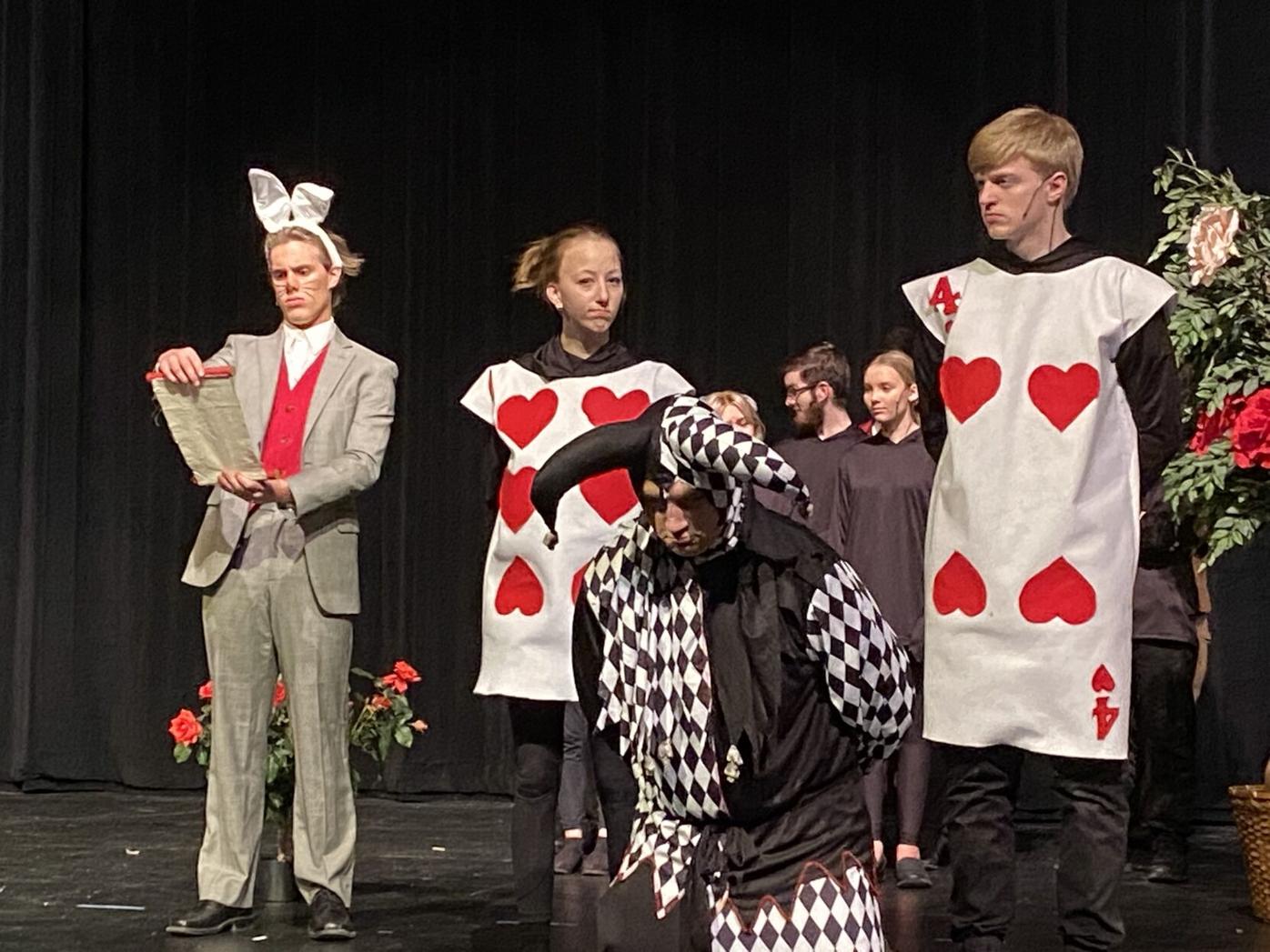 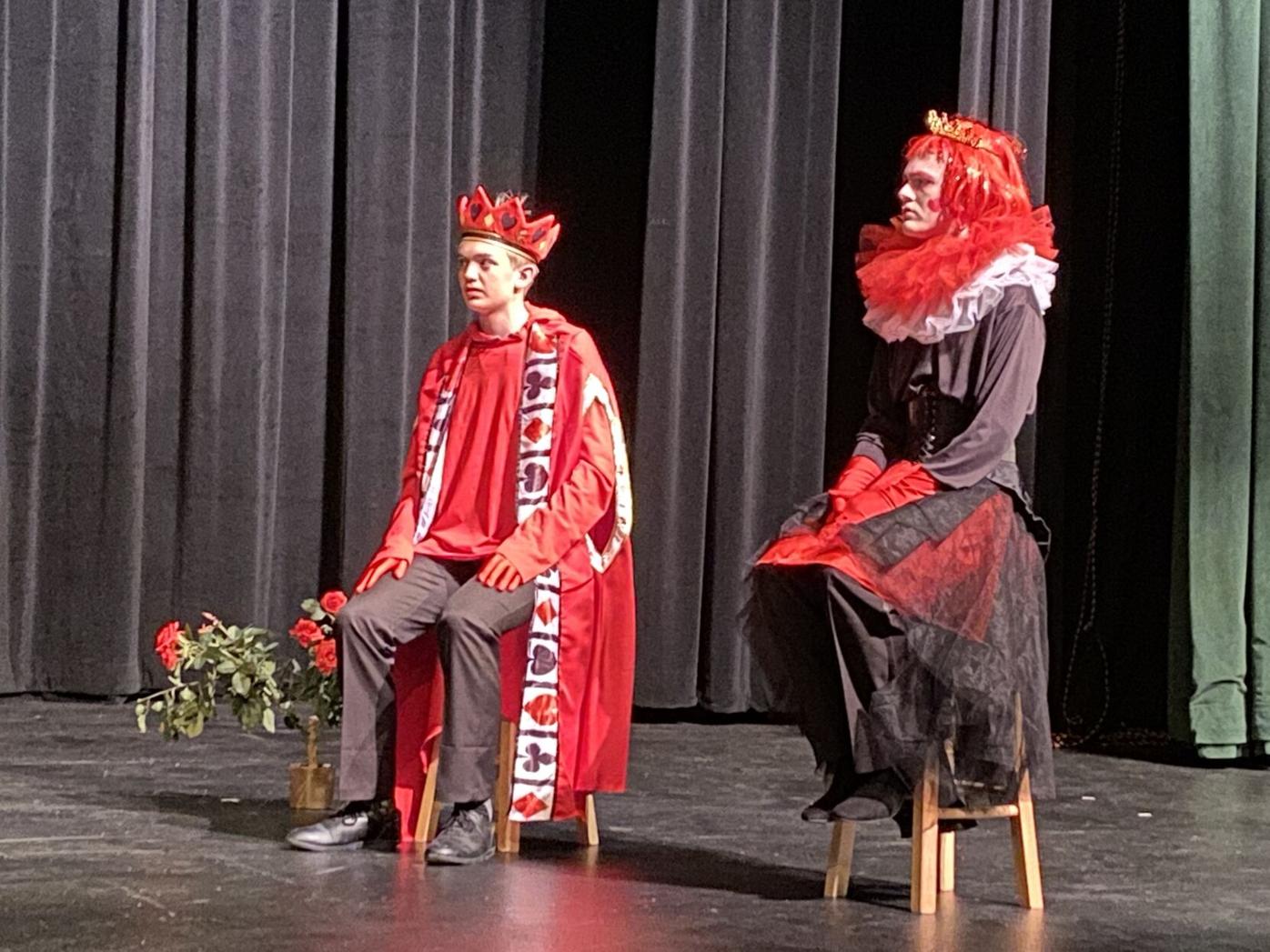 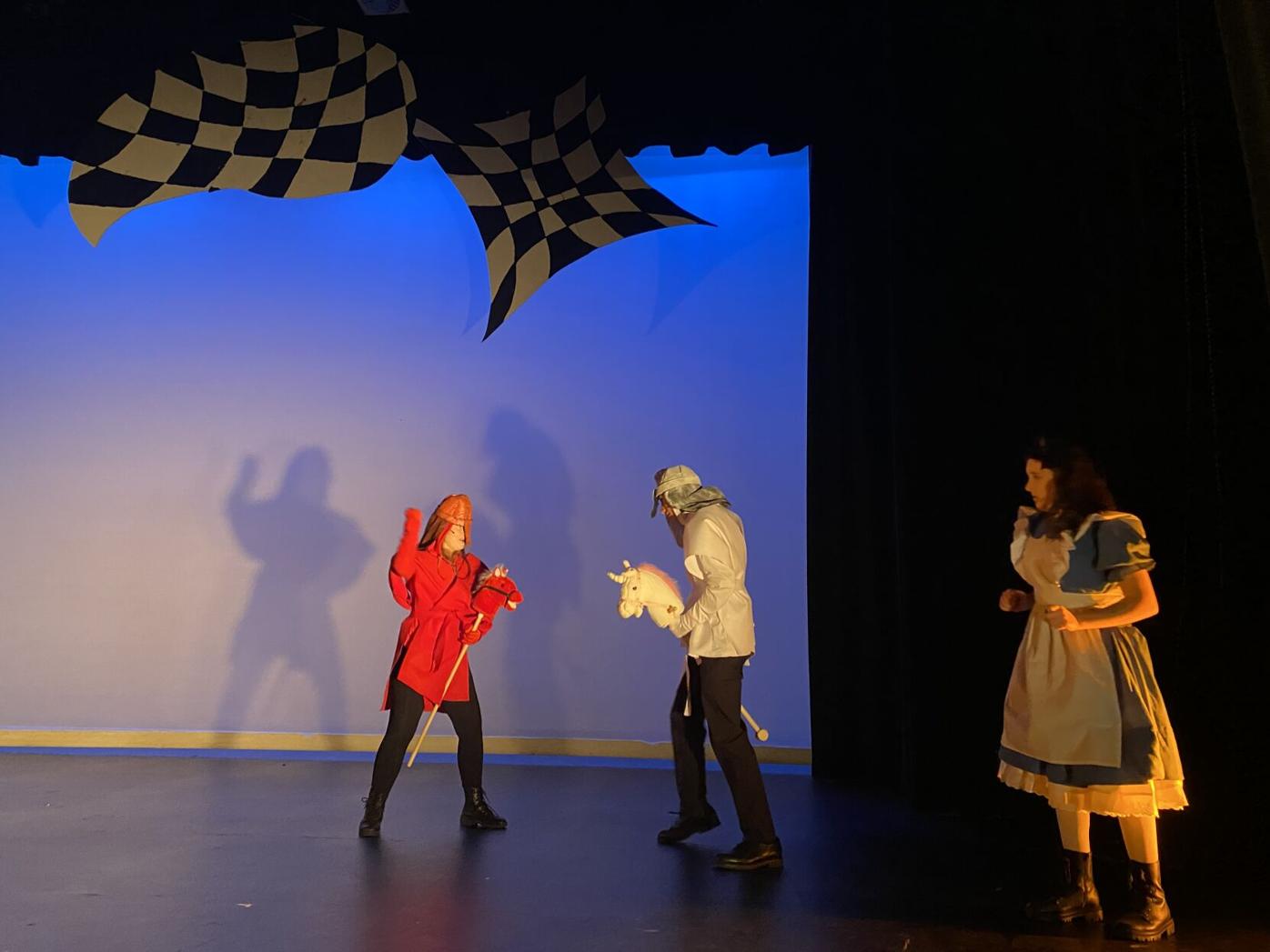 Seniors Emma Hendrickson (Alice in Wonderland) and Gabby Rosen (Alice in Looking-Glass Land) help lead the way in the captivating world of characters based on the Lewis Carroll novels in Andover Theatre’s “Alice” and “Through the Looking-Glass,” performing its final weekend Nov. 19-21.

If things seem a bit peculiar — and rather mad — you have arrived in the right place.

It’s a wacky trip down the rabbit hole and through Wonderland for Andover High School Theatre as it performs the final weekend of “Alice” and “Through the Looking-Glass” Nov. 19-21, two one-act adaptations of the Lewis Carroll novels.

“Students have been very excited to get back in front of live audiences,” director Ann Leaf-Johnson said. “They thrive off the energy a live audience gives them with their reactions, and there’s no way a virtual performance can replicate that.”

“I feel like life is finally starting to get back to normal, it was weirder performing online than it was performing in person,” said senior Mackenzie Rak, who plays the Dormouse in Wonderland and Larkspur in Looking-Glass Land. “I think everyone in the cast really likes being back in person. We can all actually connect with each other and learn more about each other as friends and create bonds that we couldn’t through a computer.”

The fall play selections were a fitting choice: a familiar story for students returning to the stage, with a mix of characters who are sometimes silly, sometimes spooky and sometimes, well, mad.

“In order to bring in new students and audiences this year, I wanted to choose a show that would have good name recognition,” Leaf-Johnson said. “Students who are undecided about joining theater are more likely to audition for a play that they’ve heard of or that they have childhood associations with. Audiences also look forward to seeing characters they may love from their own childhoods like the Mad Hatter or Cheshire Cat.

“I, personally, also have strong childhood associations with the novel ‘Through the Looking-Glass,’ which audiences might be slightly less familiar with than ‘Alice in Wonderland.’ The Jabberwocky poem is fascinating and has been great fun to teach the students.”

A renewed sense of energy is palpable throughout the cast as they return to live performances this fall. A zany set of characters only enhances the fun.

“It feels amazing! I have no other words to describe it,” said senior Gabby Rosen, who plays Alice in Looking-Glass Land and the Two of Hearts in Wonderland. “After almost a year away from the stage and a few virtual performances, I am so incredibly happy to be back with a live audience. Theater obviously hasn’t been the same, and to be honest, over such a long time without it, I kind of lost a bit of that spark and passion. But I completely got it back through this performance and fell in love with it all over again!

“I would think the cast has enjoyed almost everything. Just being back in the auditorium on that first day of rehearsal you could feel the energy and excitement amongst everyone! I think a universal feeling this school year has been being grateful. Not only for being surrounded by your peers once again, but also for having the opportunity to be involved in the activity you love. My favorite part of this show was meeting a ton of new people. Since last year we weren’t really able to get a ton of new people due to the pandemic, so we have done a ton of recruiting this year. It has been such a joy to meet everyone and watch them improve over the entire rehearsal process. Of course, there were challenges. We are still in a pandemic, so keeping everyone safe and healthy was always a top priority and on many people’s minds. Thankfully everyone remained healthy!”

“My favorite part of the play is all the umbrella parts and movements,” Rak said. “It took a lot of practice and patience, but I’ve seen videos of how it looks to the audience and it’s so much cooler than I ever could have imagined.”

Final performances will be held Nov. 19-20 at 7 p.m. and Nov. 21 at 2 p.m. For more information or to purchase tickets, visit www.andovertheatre.org.

“This performance is appropriate for all ages as we follow Alice on her journey through Wonderland and Looking-Glass Land,” Leaf-Johnson said. “She meets many memorable and quirky characters along the way and the imaginative elements are strong throughout.”

“I think audiences will just be happy to be back in person,” Rak said. “I know a lot of my family was really excited to come in person and watch me, instead of trying to watch online with all the problems that streaming videos can cause sometimes. Last year was really difficult for both the cast members and audience members, there were a lot of technical issues and as much as we tried to power through them it just wasn’t the same as being in person.”

“I think this show isn’t what the audience would expect it to be,” Rosen said. “It’s very unique and out of the box. Our director has done a phenomenal job with this production. It has been so fun for us cast and crew members to see this quirky show come together. I hope audience members feel the excitement, peculiarity and spookiness of the show while watching ‘Alice’ and ‘Through The Looking-Glass!’”